COVENTRY, England – Moviegoers of a certain age will likely draw an association between the flag-emblazoned E-type “Shaguar” driven by Austin Powers and the car’s image as an icon of Swinging-Sixties cool. For sure, the Brits cling to this era, recalling a time when everyone from The Beatles to the nation’s car manufacturers were successfully exporting English swagger to the world.

As the 60th anniversary of the E-type’s first appearance in 1961 approaches, attention is again focused on this golden age for British automotive engineering and Jaguar’s increasingly industrialized approach to leveraging its heritage. That takes the form of an impressive modern facility on the outskirts of the brand’s hometown, where classic Land Rover, Range Rover and Jaguar vehicles are “Reborn” in nut-and-bolt factory restorations. This isn’t a few old hands turning spanners in a dusty corner of the main factory — instead customers can go direct to Jaguar Land Rover Classic Works, order the Reborn vehicle of their dreams and sit patiently for the spectacular return on their considerable investment.

In the case of the Reborn E-type driven here, that starts at around $400,000, though that figure can rise considerably if you’re fussy about the vintage of the original car and want one based on a more sought-after early model. For the real fanboys Jaguar is even offering Drivsix matched pairs of restored E-type 60 Editions to celebrate the coupe and roadster that were famously driven direct from the factory to the Geneva unveiling just in time for Jaguar founder Sir William Lyons to reveal it to the world. That even Enzo Ferrari was moved to acknowledge its beauty adds to the romance of that moment, and explains why Jaguar is so keen to celebrate it. 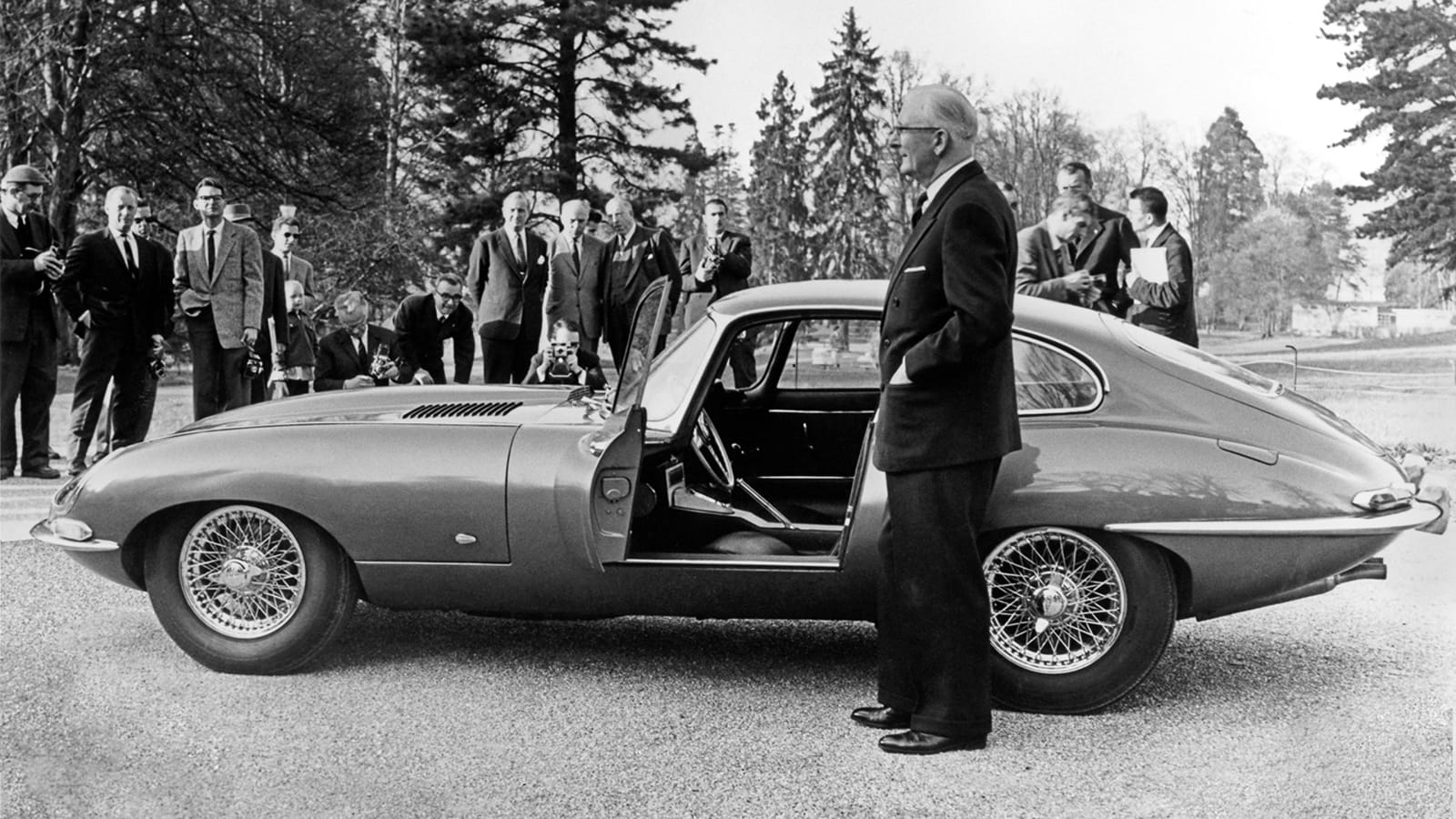 But can the Reborn E-type do justice to such myth and legend? And is factory original really preferable to the restomods built by independents like Eagle? Wheel time in a gorgeous Reborn 1965 4.2 Fixed-Head Coupe on an authentically grey and overcast English day is my chance to find out.

The E-type may have earned Enzo’s respect for its looks but, ever the wily engineer, he will likely have been paying closer scrutiny to what was under those slinky panels. Jaguar had demonstrated it could beat the world’s best in sports car racing with multiple Le Mans wins in the 1950s. As the new decade dawned, it looked to have ambitions to do the same in showrooms with a product that made Maranello’s finest seem like old tech.

Look at it this way: At the time, Ferrari was selling coachbuilt coupes based on spaceframes and running leaf-sprung live axles at the rear. Sure, the engines were exquisite, but for a fraction of the price the E-type offered a steel monocoque, an independent suspension and disc brakes all around, rack-and-pinion steering and equivalent power from a six-cylinder engine. No wonder it got his attention. 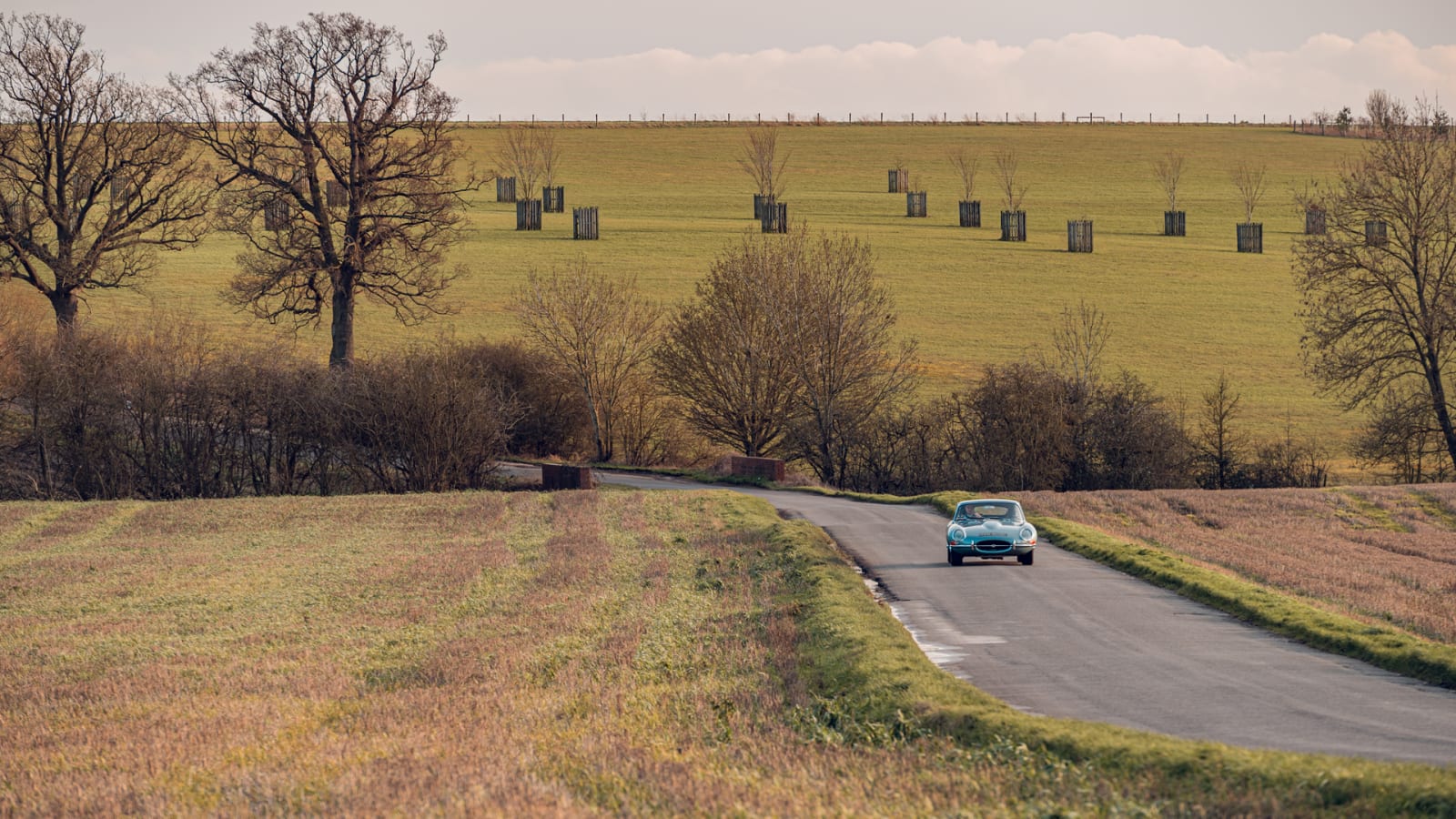 Those foundations still make the E-type relevant today. I’m driving it on the same English backroads on which it was developed 60 years ago, likely in similar conditions. The shiny facility where the cars are restored may be of the modern age but, within a few hundred yards, the roads are exactly as they were back then. Narrow and bumpy, they twist and turn between hedgerows, testing steering, suspension and brakes in a way that informs Jaguar products to this day.

Those of a 21st-century physique may find the door aperture of the E-type coupe a bit of a squeeze but, once inside, it fits like a glove, with plenty of headroom and space in the footwell to ensure you’re not hitting all three pedals at once. The wood-rimmed steering wheel sits close to your chest, the four-speed shift lever is a hand-span away and the view down the long hood sets hairs to attention before the engine even fires.

When it does, the sound is as gorgeous as the looks. The twin-cam XK engine is the beating heart of generations of Jaguars and as much an icon of the brand as the famous “leaper.” Breathing through three giant carbs and dual exhausts exiting under the rear bumper, it responds instantly to the throttle with a sophisticated growl. Sure, Jaguar made an electric E-type as a demo. But if that’s what you want, go buy an I-Pace. 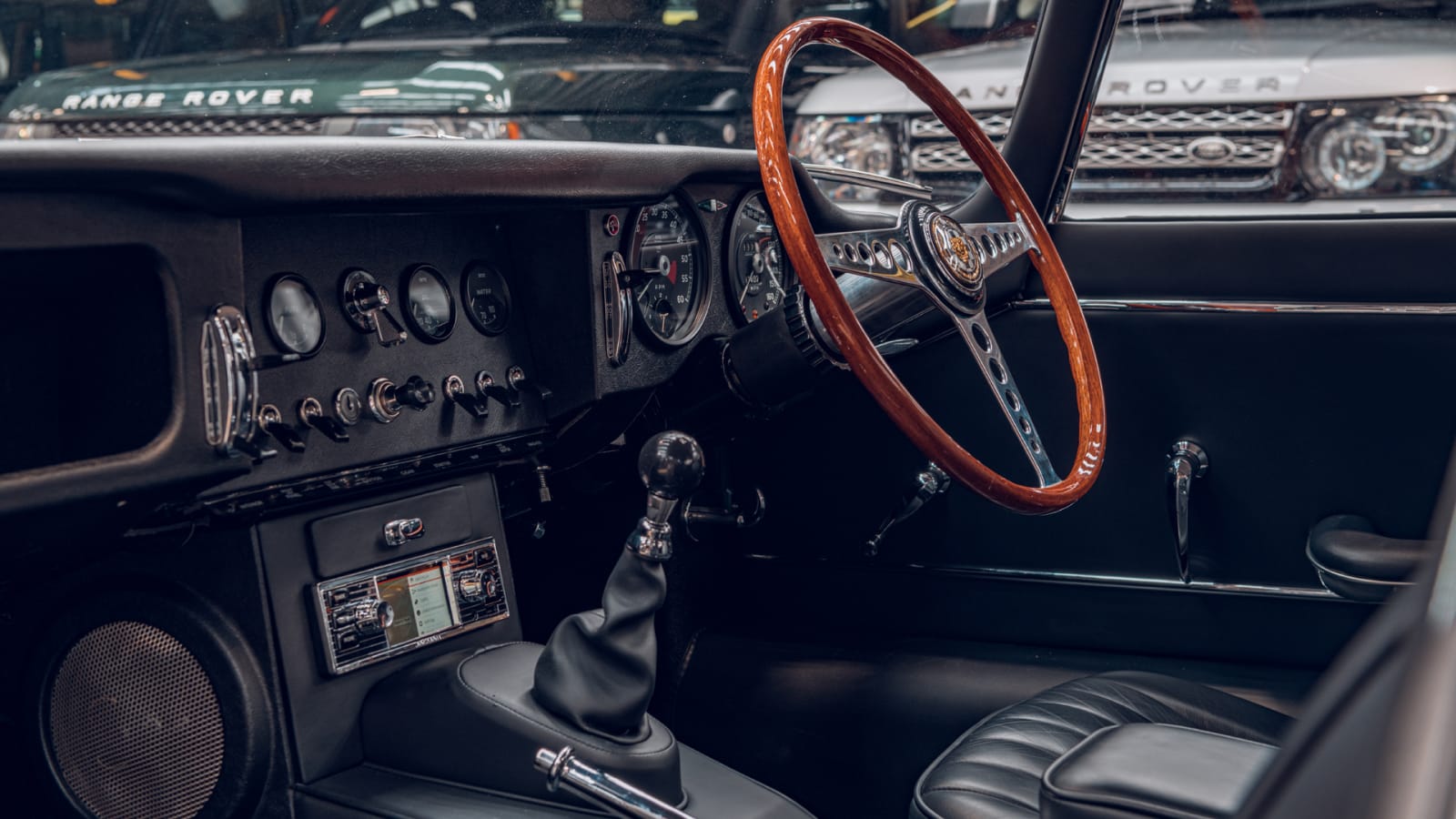 This one is a later 4.2-liter, which has comparable horsepower to the 3.8 but gets 283 pound-feet of torque to the smaller engine’s 260, for a more relaxed power delivery. Everything from the synchromesh gearbox to the reassuring brake feel, positive steering and balanced suspension set-up inspire confidence in the first few hundred yards. It’s clear this car has been reborn for people willing to drive, not just admire. For sure, allowances have to be made for the lack of safety aids or crash protection should the worst happen. But few cars of this vintage feel so well equipped to drive at a modern pace, or so easy to get into the groove with. Your $400,000 could buy you any one of the current crop of 200-mph supercars. But on real roads, at real speeds, you get to enjoy more of a return on that investment in a classic like this.

If you like the sound of that, then Jaguar Classic is waiting to hear from you. The current Reborn program is based on the original Series I cars, rather than the Series II and Series III that U.S. buyers enjoyed as the XK-E. But given these are arguably the prettiest and purest of the line, that’s no problem. And if your checkbook can open wide enough, the guys in the workshop will entertain whatever restoration project your heart desires. Even an Austin Powers-inspired Shaguar livery? “No reason why not,” laughs the man from Jaguar Classic.