Hyundai confirmed that its N division's next new model will be a high-performance evolution of the Kona. The hot-rodded people-mover will take the burgeoning sub-brand into a new segment when it arrives for 2022.

Based on the face-lifted Kona revealed in 2020, Hyundai's first go-fast crossover will receive a more aggressive-looking design characterized by a deeper front bumper with honeycomb-shaped inserts, specific side skirts, a bigger roof-mounted spoiler, and a reshaped rear bumper with an integrated air diffuser. Two round exhaust tips will let other motorists know that this Kona means business, but its full exterior design remains wrapped in N-branded camouflage that's even less revealing than the one worn by the test mules spotted by our spies. While it stopped short of publishing full technical specifications, Hyundai confirmed that the rumors claiming the Kona N would receive a 2.5-liter turbo four developed for its midsize sedans are false. Instead, power will come from a 2.0-liter turbocharged four-cylinder engine. It's presumably the same 275-horsepower unit found between the Veloster N's fenders, but it might benefit from a power hike because it will have more weight to shuttle around.

The firm also revealed that the Kona N will be available with an eight-speed dual-clutch automatic transmission. We'll need to be patient to find out if that will be the only transmission offered, or if a six-speed stick will be on the menu, too. Significantly, we also don't know if the N-badged Kona will be front- or all-wheel-drive.

Hyundai will release more details in the coming weeks, so we expect to see the Kona N in the metal for the first time before the Michigan snow begins to melt. It will release the crossover for the 2022 model year with a price tag that will likely hover in the vicinity of $35,000. For context, the Veloster N carries a base price of $33,245.

When it lands, the Kona N will share showroom space with the Veloster N. Across the pond, it will also be sold alongside the i20 N, which Hyundai revealed in October 2020 as an alternative to the Ford Fiesta ST. 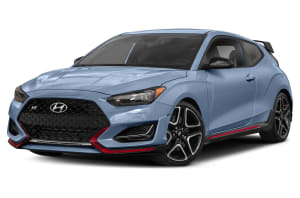