While small, it's actually bigger than the Countryman, Mini's biggest model. 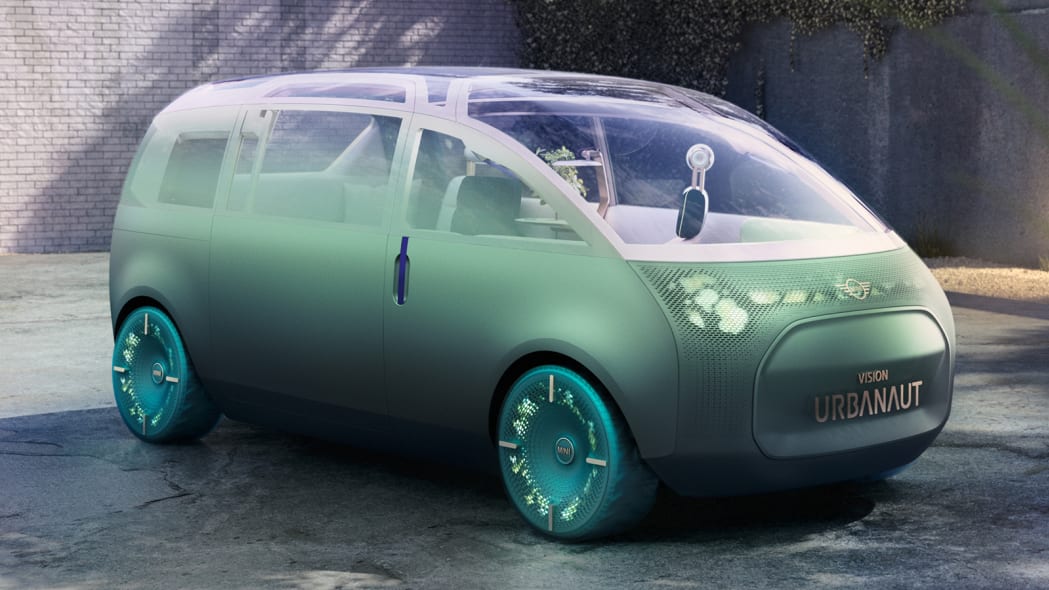 If car designers are to be believed, the future of fully-autonomous electric vehicles is the box. Whether it's squared-off or rounded, it seems many autonomous concept vehicles are vans meant to efficiently carry people and stuff, or be a new living space. And that's the case with the Mini Urbanaut concept, just on a smaller scale.

The Urbanaut measures in at 14.6 feet long, which is a little more than 2 feet shorter than a Toyota Sienna. But if it were put into production, it would be the biggest Mini on sale at roughly half a foot longer than the Countryman, and easily as tall if not taller (Mini didn't provide an exact height). It takes the one-box shape close to its extremes, similar to a VW Bus, which itself is seeing an electric revival. At the front, an aluminum grille inspired by the current Mini grille hides LED lights for illumination and communication, and taillights get similar aluminum coverings. The wheels are translucent and illuminated. There are cutouts that are inspired by the Union Jack flag. The Urbanaut features two particularly unusual design choices, though. The first is that it has a single sliding door for interior access. The second is that one of the C-pillars is actually a sort of display case that can store a variety of souvenirs or other trinkets. Isn't that cute?

The interior has seating for four, with a rear bench and conventional bucket seat at the front for the driver next to a sort of jump seat. The driver seat can swivel to face the front for manual driving, or to face the middle for parked or autonomous modes. In between the rows of seats is a table with a decorative plant as well as the main instrument display and infotainment interface. The screen is round, a callback to old Mini instruments and the current cars' center infotainment binnacle. The idea is that the Urbanaut would primarily be used in autonomous or parked modes with occupants facing toward the middle. There is, however, a secondary display that activates at the front when the car is in manual driving mode.

The interior has a number of nifty party tricks. There's a ceiling section above the rear seats called the "Loop" that has animated illumination behind a fabric covering. The dashboard lowers at the front in the stationary mode to create a daybed. The windshield can open up, too, when parked.

Different vehicle modes are accessed by placing the key fob, called the "Mini Token," in the corresponding slot. There are three modes, two of which are for use when parked. "Chill" folds away the instrument display and lights up the Loop to look like trees while playing nature sounds. "Vibe" sets the illumination to look like a graphic equalizer and is sort of a party mode. "Wanderlust" is the main driving mode and provides illumination to evoke motion while providing trip information on the display. This latter one can be used in manual driving mode, too. There's of course a custom settings, too, for a blend of preferred illumination, music, and even scents. All of these features make the Urbanaut seem like it would be a great beach or camping machine.

Powering the Urbanaut is an electric powertrain, with all the components stored in the floor in order to maximize space. Unfortunately, Mini didn't provide any kind of information as to which wheels are driven, how many motors are used or what kind of battery capacity it has. Similarly, Mini hasn't said anything about the production likelihood of the Urbanaut. We think it's rather nifty and could see a tiny van, especially one with camping potential, being fun and reasonably successful.