Our first clear look at the production version coming next year

After years of rumors, spy shots and speculation, Jeep has finally given us a clear look at the upcoming Wagoneer line. Our preview comes in the form of the Jeep Grand Wagoneer concept. That it's a concept may sound discouraging at first, but make no mistake, when the production model starts rolling off the line next year, it will be very similar. Think of this as a Grand Wagoneer with some extra fancy concept garnish.

The Grand Wagoneer makes a strong first impression. It's extremely boxy, a shape augmented by the square windows and bolt-upright pillars. It has bulging fenders that give it a wide stance. The thin, wide headlight and taillight arrays support the visual width. The strong shape is given a bit of softness and sophistication with FCA's signature subtle curves and creases. We're not entirely sold on the thick, body-color pillars, but they do help the Grand Wagoneer cut an unmistakable look. You certainly won't mistake it for anything else.

Some of the concept car garnish shows up on the outside. The 24-inch wheels feature 3D-printed detail pieces in the spokes. Real teak wood accents are found in the roof rails and around the individual LED projectors in the headlights. The bronze-colored trim is probably a 50/50 shot for production. We could see something similar being offered as part of a special package. Another feature straddling that line are the illuminated strips between the grille slots.

While the exterior has some potentially polarizing cues, the interior seems like a slam dunk with elegant design and high-end materials. The dash is upright and wide, with the top wrapped in leather and the bottom finished with aluminum and, what's probably a special concept feature, heat-treated lacewood. In between are large panels of glass. They help to house one of the Grand Wagoneer's signature features: almost too many screens. 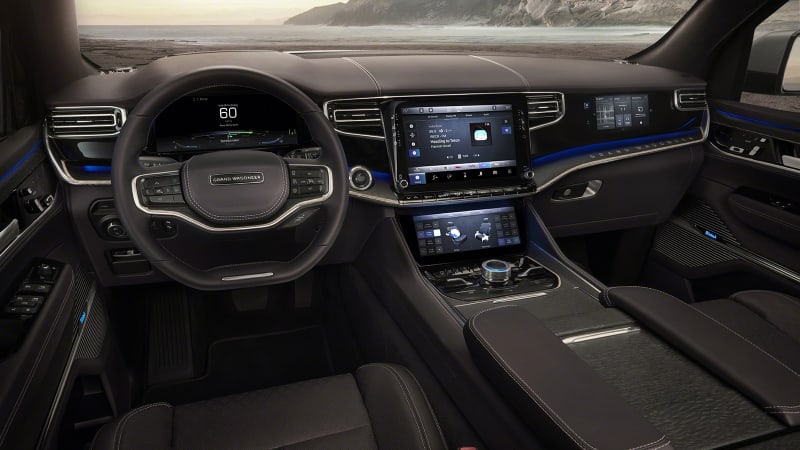 In front of the driver is a 12.3-inch instrument display. In the middle are two screens, a 12.1-inch unit for the Uconnect 5 infotainment system, and a 10.25-inch display below that for climate and seat controls. The passenger even gets a 10.25-inch infotainment display that can be used for adjusting settings or watching media. The second-row seats also get individual 10.1-inch screens. The third-row will have to be happy without screens. Sound for all these screens comes through a McIntosh 23-speaker sound system that features aluminum trim and blue lighting like the company's home audio systems. The infotainment will even display simulated VU needles like a Hi-Fi setup.

Like the exterior, some of the trimmings of this interior we suspect will be simplified. There may be a little less aluminum, more common wood, possibly plastic instead of glass, and perhaps a little less flashy sound system. But the overall design should make it to production, along with the available three rows of seats, and, yes, probably the bevy of displays.

The one thing Jeep was tight-lipped about was the mechanical aspects of the Grand Wagoneer. Apparently the concept features a plug-in hybrid powertrain, but that's all we know about it. It could be a variant of what the Wrangler 4xe will use. It likely won't be the only powertrain of course, as FCA has some lovely V8s and even a diesel that would work nicely in the full-size SUV. Apparently the production model will be available with three different four-wheel-drive drivetrains. Suspension is fully independent at each end, and air suspension will be offered.

We also know that Jeep will sell versions of the SUV with both the Wagoneer name and the Grand Wagoneer name. Brand representatives made it clear that the nameplate will span everything from mainstream SUV buyers to customers shopping luxury vehicles. We're expecting a range sort of like that of the GM full-size SUVs including more basic Tahoes up to flashy Escalades. Pricing will reflect that, as the production Wagoneer will start around $60,000, and Grand Wagoneers could break the six-figure mark.