This may sound obvious, but we'll say it anyway: if an automaker delivers exactly the ownership experience that buyers are looking for and have come to expect, they are going to score well in studies designed to measure a vehicle’s appeal. That’s why Porsche, with a score of 881, sits at the top of all vehicle brands in JD Power’s 2020 Automotive Performance, Execution and Layout (APEAL) Study, which is designed to gauge how owners feel about their vehicles on an emotional level. And it's also why Dodge's score of 872 leads all Mass-Market brands, followed closely by corporate cousin Ram. It's worth noting that Dodge — a brand primarily known these days for packing as much horsepower into its aging lineup as possible — was also atop JD Power's 2020 Initial Quality Study (IQS) rankings, making it the first domestic automaker to lead both categories in the same year.

Before we continue on with the rest of the winners and losers, we'll mention that Tesla is only unofficially included in this year's study because it did not grant JD Power permission to contact owners of its vehicles in 15 states. Still, the study includes results from surveys completed in the remaining 35 states, and if Tesla had been officially included it would have led all brands with a projected score of 896. Conversely, Tesla would have sat at the very bottom in JD Power's IQS rankings. That means Tesla owners report more problems with their vehicles than owners of any other brand, yet they still love and connect with them on an emotional level. 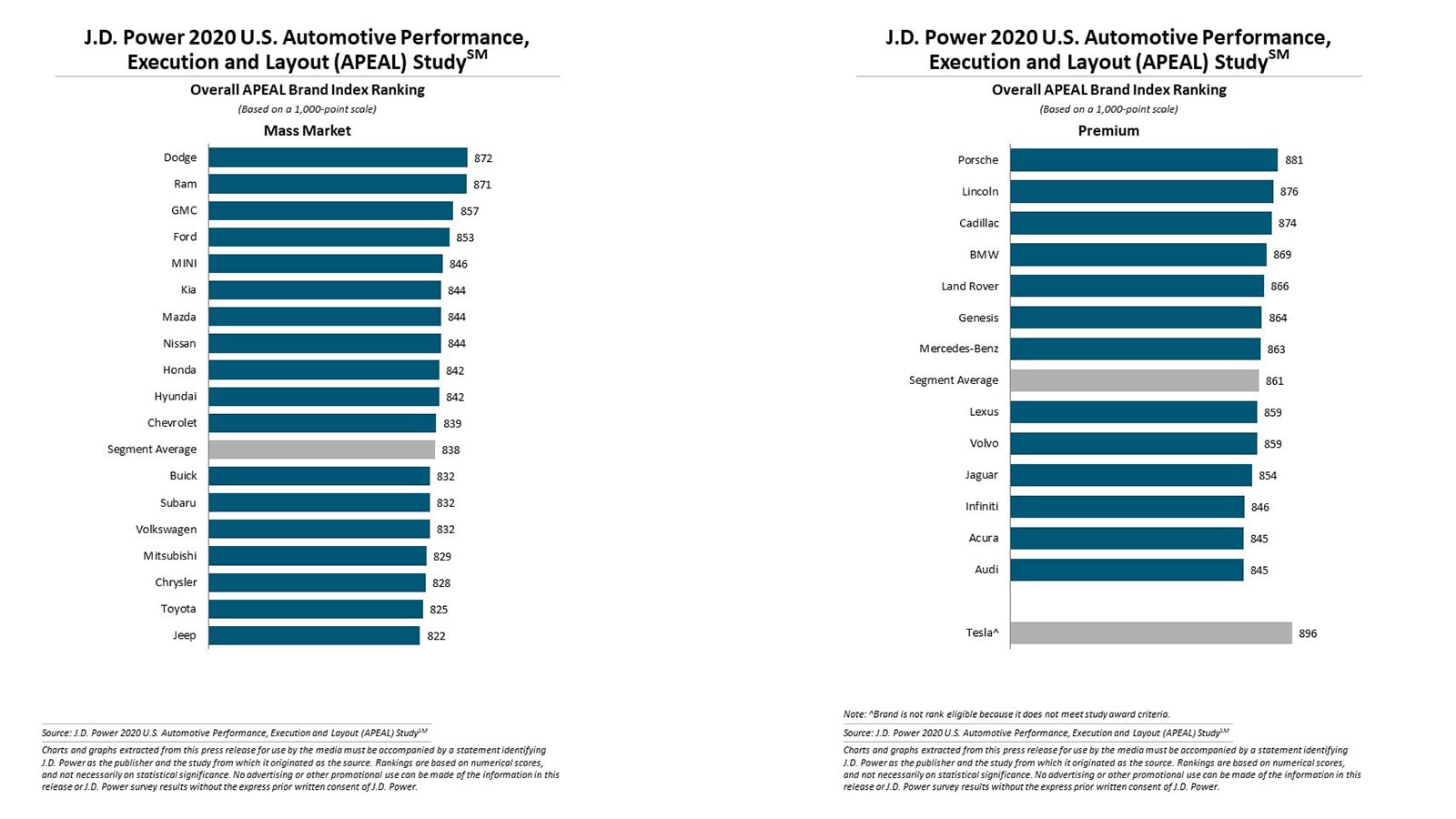 The worst performers overall were Volkswagen (832), Mitsubishi (829), Chrysler (828), Toyota (825) and Jeep (822). When asked why Jeep, a brand with a massive fanbase and desirable models like the Wrangler and Gladiator, could land at the very bottom of its rankings, JD Power's Dave Sargent explained that what people love about Jeeps is not necessarily captured in this study. “Feeling like you could go anywhere and are part of a club are not measured here," Sargent said on a conference call announcing the results.

Finally, JD Power highlighted eight individual vehicle models that are ranked at the top of both its IQS and APEAL studies in their respective categories: