Old cars are fun. Now I want one.

As fewer new cars are rolled out due to delays in production or other reasons, some manufacturers have decided to open their classic car vaults to let us get a taste of history. We've already tested a 1984 Volkswagen GTI and 1999 Honda Prelude Type SH with more classics to come. This time, I got to spend a day and a night with a 1964 Volkswagen Karmann Ghia. Here are six things I learned.

Let's kick things off with the grand conclusion: I want to buy something old. Up until this grand day of running around town in a 1964 Volkswagen Karmann Ghia, I hadn’t spent any significant amount of time in a car from this era. I’ll admit, it was off-putting at first. The brakes don’t work well. Accelerating out of a bad situation is probably not going to work (i.e. an incoming texter at a stoplight), and the amount of wiggle to the steering wheel on center doesn’t inspire confidence. Safety features are also greatly lacking — you get a lap belt, but there are no shoulder belts and no headrests, and the fear of what would happen in a crash is real.

But once I got some miles under my belt, I became much more comfortable with the way it drives. After moving past the comfort stage, it became fun. Really fun. Most new cars tend to be mindless bores to drive straight on a road at 55 mph. That’s not so with a Karmann Ghia convertible. Driving at that speed requires concentration. There’s no tach, so you listen to the engine and watch out for the little red dashes in the speedometer to know when to shift. Pull that next gear too early, and the shift is un-smooth. Don’t time your downshifts correctly, and you’re left with zero power. The car forces you to be involved and pay attention to it. The constant engine noise from the air-cooled four-cylinder and wind in my hair just amplifies the feeling of connectedness to the machine.

There’s a beauty to the simplicity of just driving and tuning everything else out, too. Every now and then I catch a whiff of gasoline. The interior smells like my father’s old Porsche 911 that I remember as a kid. Those intangibles are righteous, automotive bliss, and it’s a huge part of the appeal. It’s not an experience I want every single day. No, I want my podcasts, and I want something fast. But on a sunny Saturday afternoon, I’m not sure that any amount of horsepower could bring the pure, driving joy and engagement that I was feeling at the helm of this tiny Volkswagen convertible.

2) Everybody stares. And then they smile.

I could not drive this little convertible anywhere without getting ogled from every passerby. That’s understandable — it’s a beautiful, old Volkswagen after all. The bright red paint and perfect convertible weather ensured I didn’t leave the driveway with the top up.

It’s a happy feeling, knowing that you might’ve made somebody’s day by simply driving past them. Folks will make conversation with you from the sidewalk. They either remember it from when they were younger, or they’re curious to know what in high hell a VW badge is doing on it. It’s tiny. And it’s cute. Plus, the pretty design and weird story is an intriguing one for enthusiasts. 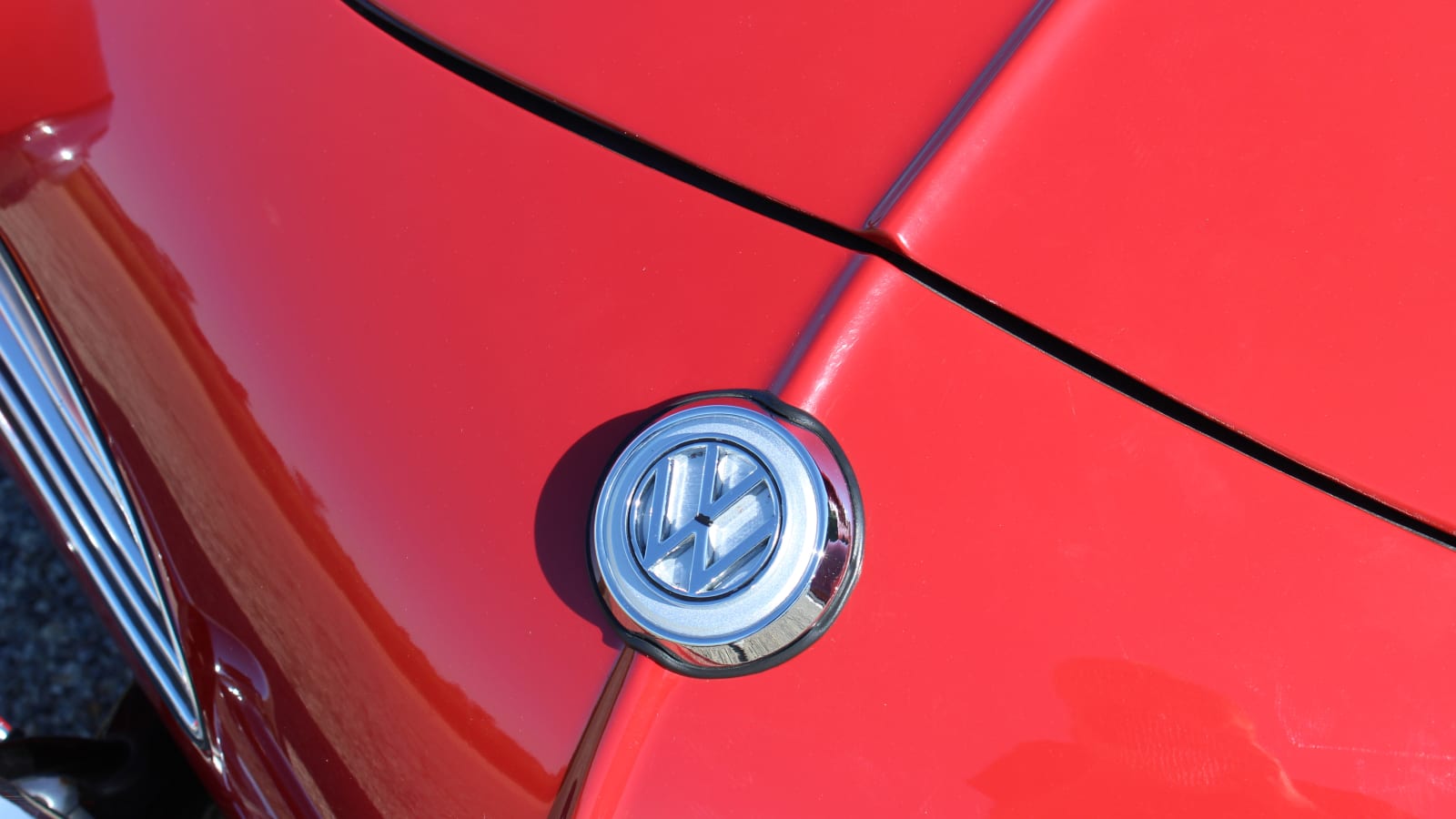 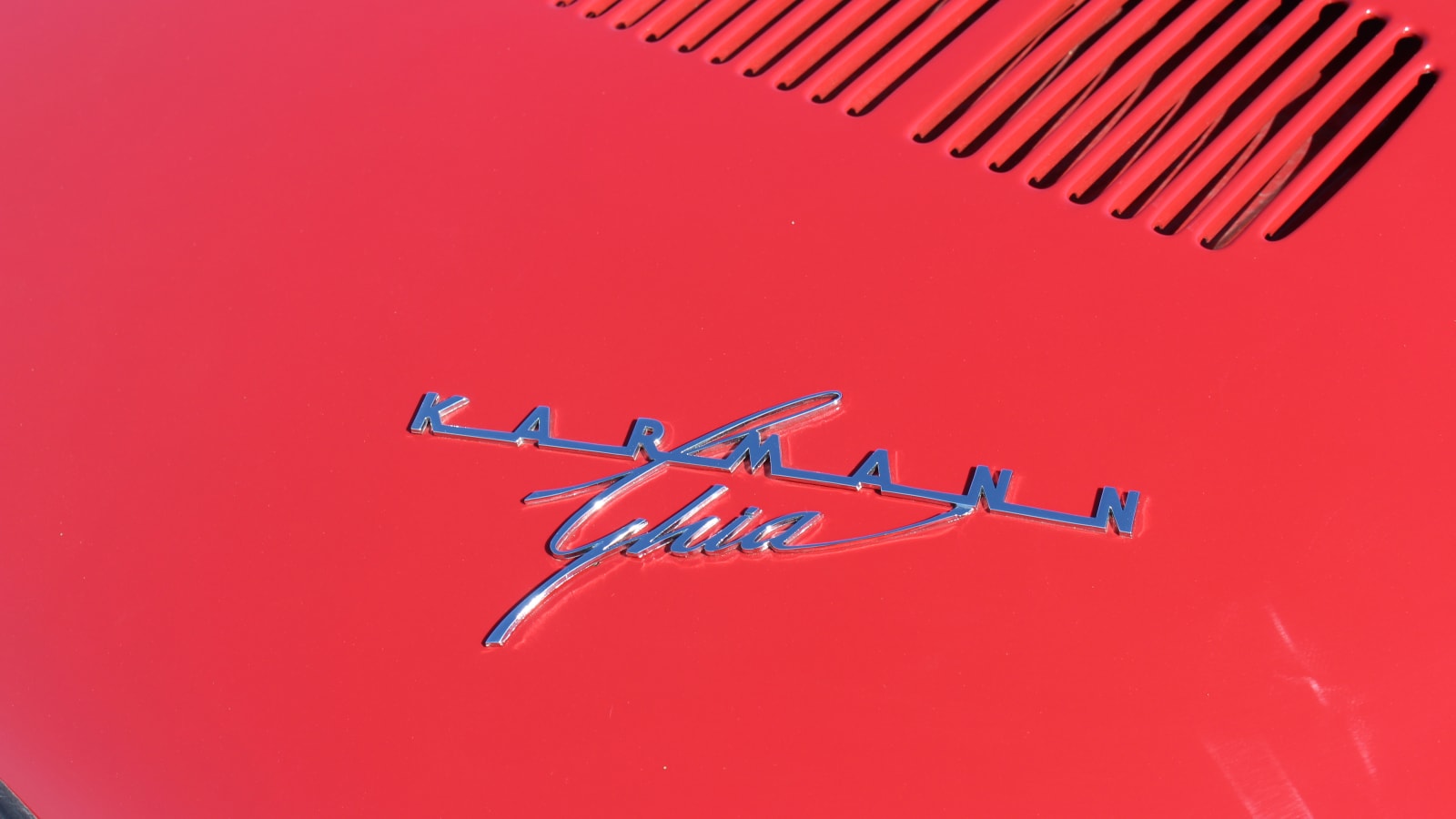 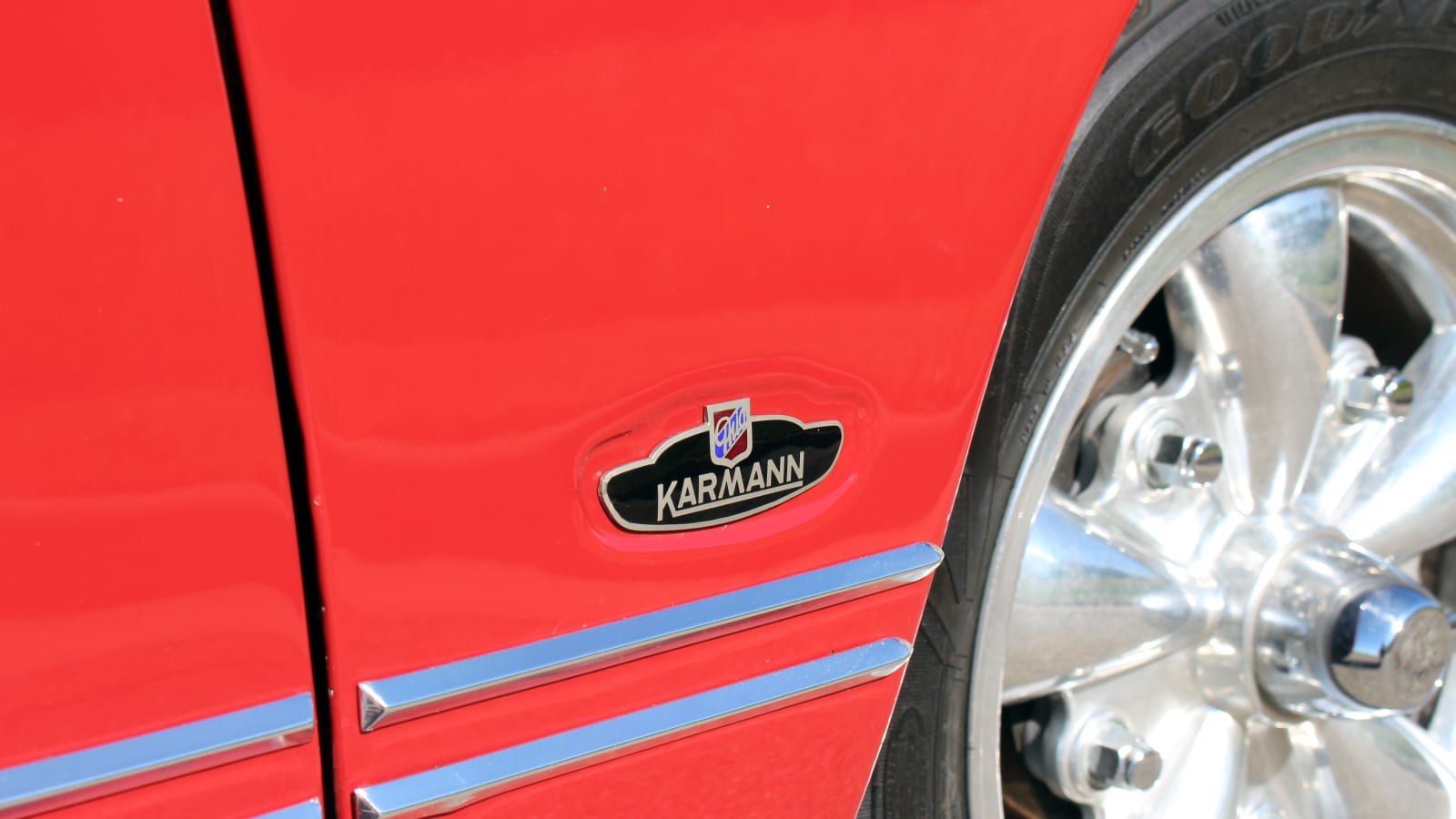 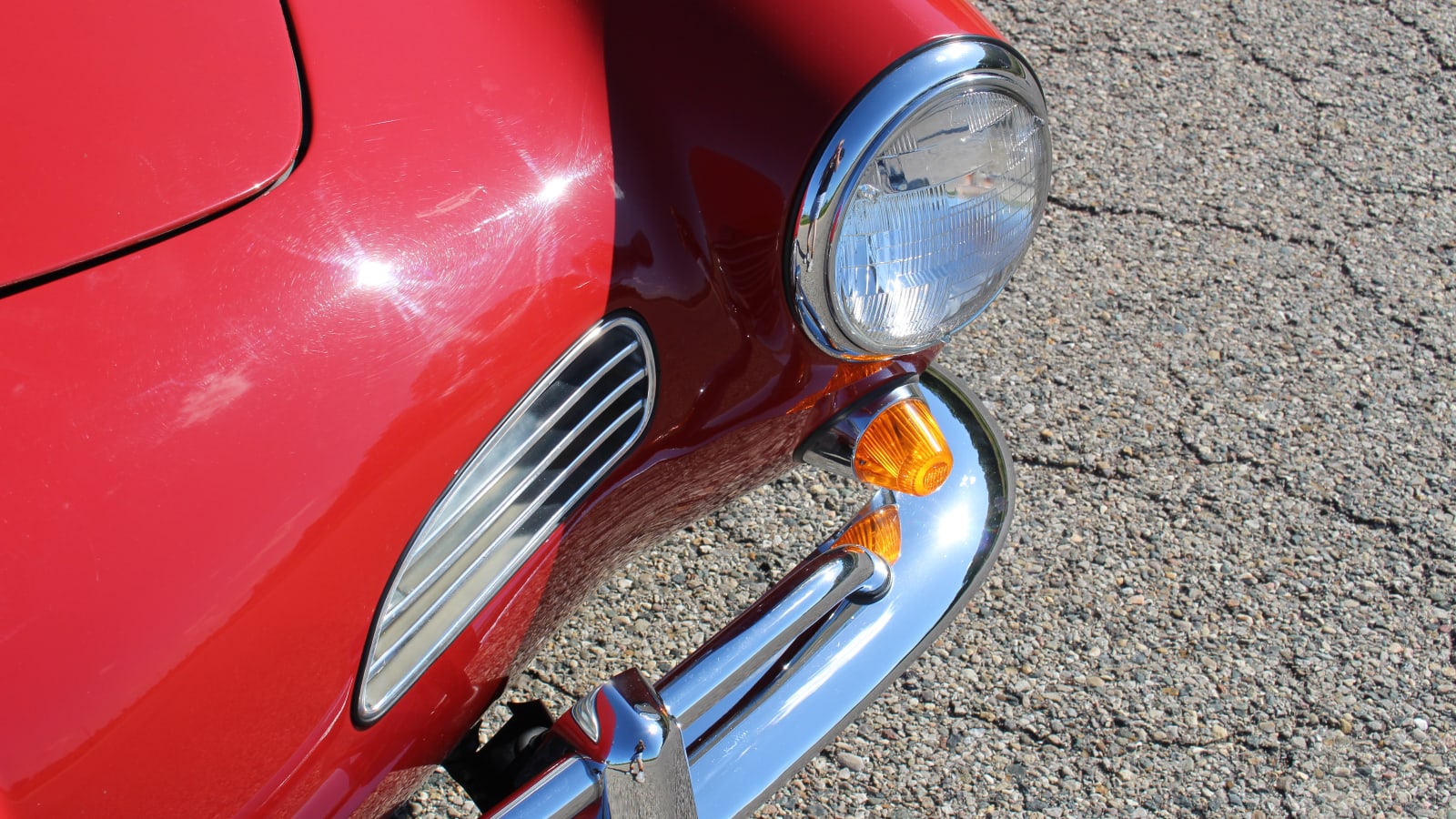 Yes, I luggage tested the Karmann Ghia. Why not? It’s shockingly utilitarian if you decide to leave the kids at home and use the shelf created by putting the rear seat down. Three carry-on size suitcases fit back there, and you can shove a few other bags in, as well.

In the front trunk, backpacks work best, but one little suitcase will fit in there on its own. I didn’t own a large collection of fedoras to check the front trunk’s fedora capacity (hey, they were popular back then), so I guess you could say I missed an opportunity to expense a boatload of fedoras. Regardless, I have proven beyond a shadow of a doubt that you can embark on a small vacation in a 1964 Karmann Ghia convertible, so there are no more excuses to leave it in the garage. Take that, Tiguan. 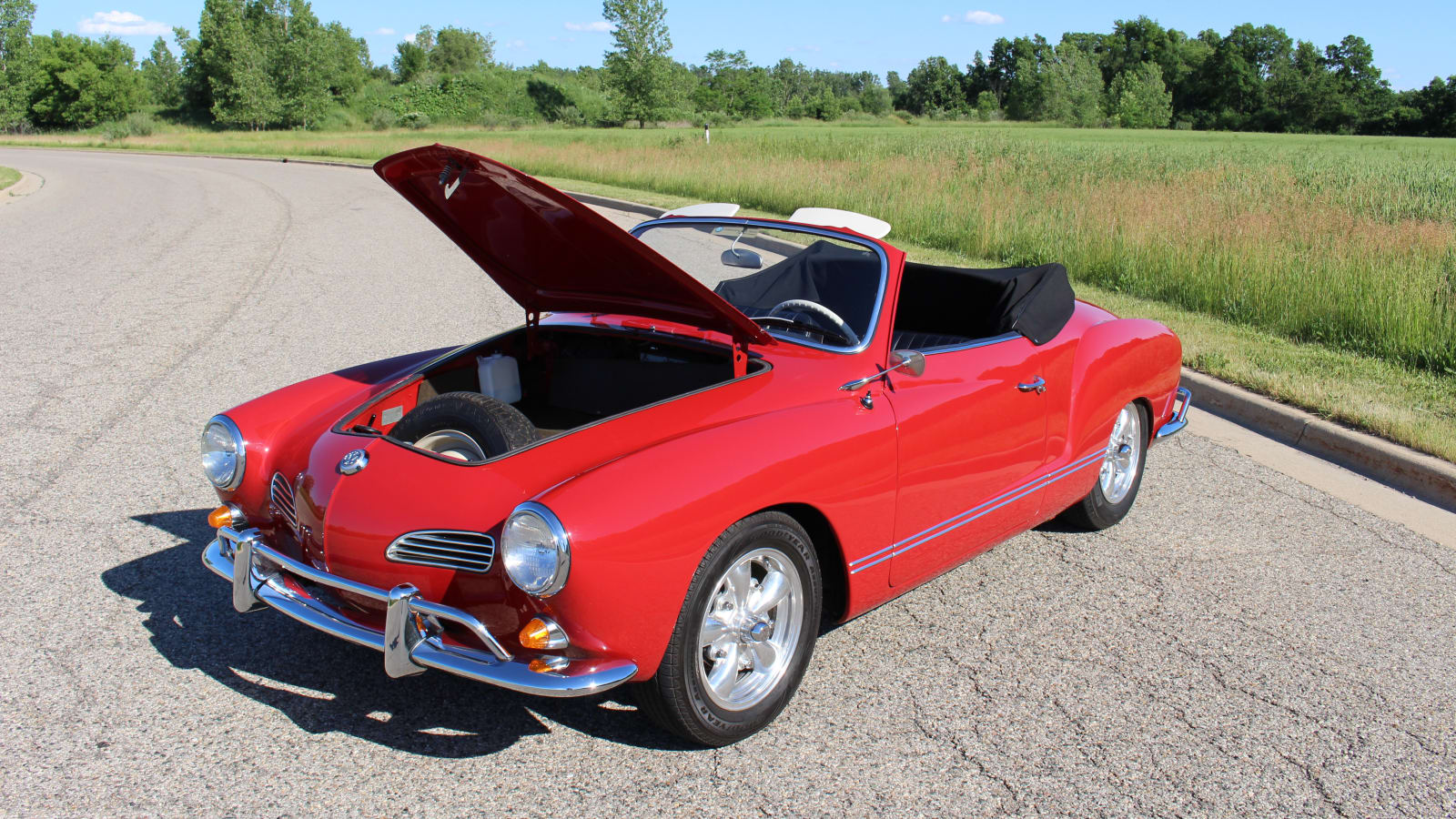 Forty horsepower of air-cooled fury sure takes ya back in time. It can’t keep up with any new car today, but the little flat-four engine brings its own kind of charm.

Many may already know this, but the Karmann Ghia was built on a modified Beetle chassis. The powertrain was carry over, leaving this Karmann Ghia with a tiny, 1,200 cc engine positioned in the back. It produces quite the clatter back there, but you can still make out a hint of an exhaust note hidden within the noise. It’ll hit 60 mph … eventually. I promise, it will, because I did hit 60 mph a few times. It even feels good at speed!

5) You must be generous with the throttle.

You’ll notice it initially dies after being started in the exhaust video above. Yours truly wasn’t entirely acclimated to the art of giving it some gas upon initial startup. It became a habit soon enough, but there were a couple rather unceremonious stallings in the driveway to start.

It’s only a short matter of time before the engine was running and idling like a top. There’s no tachometer to signal a redline, but the little red dashes in the speedometer make for good and reliable shift points for the four-speed manual. The engine is plenty loud, but never too loud so as to drown out a conversation with the roof down. It’s a beautiful weekend cruiser for those rare 75-degree sunny days. 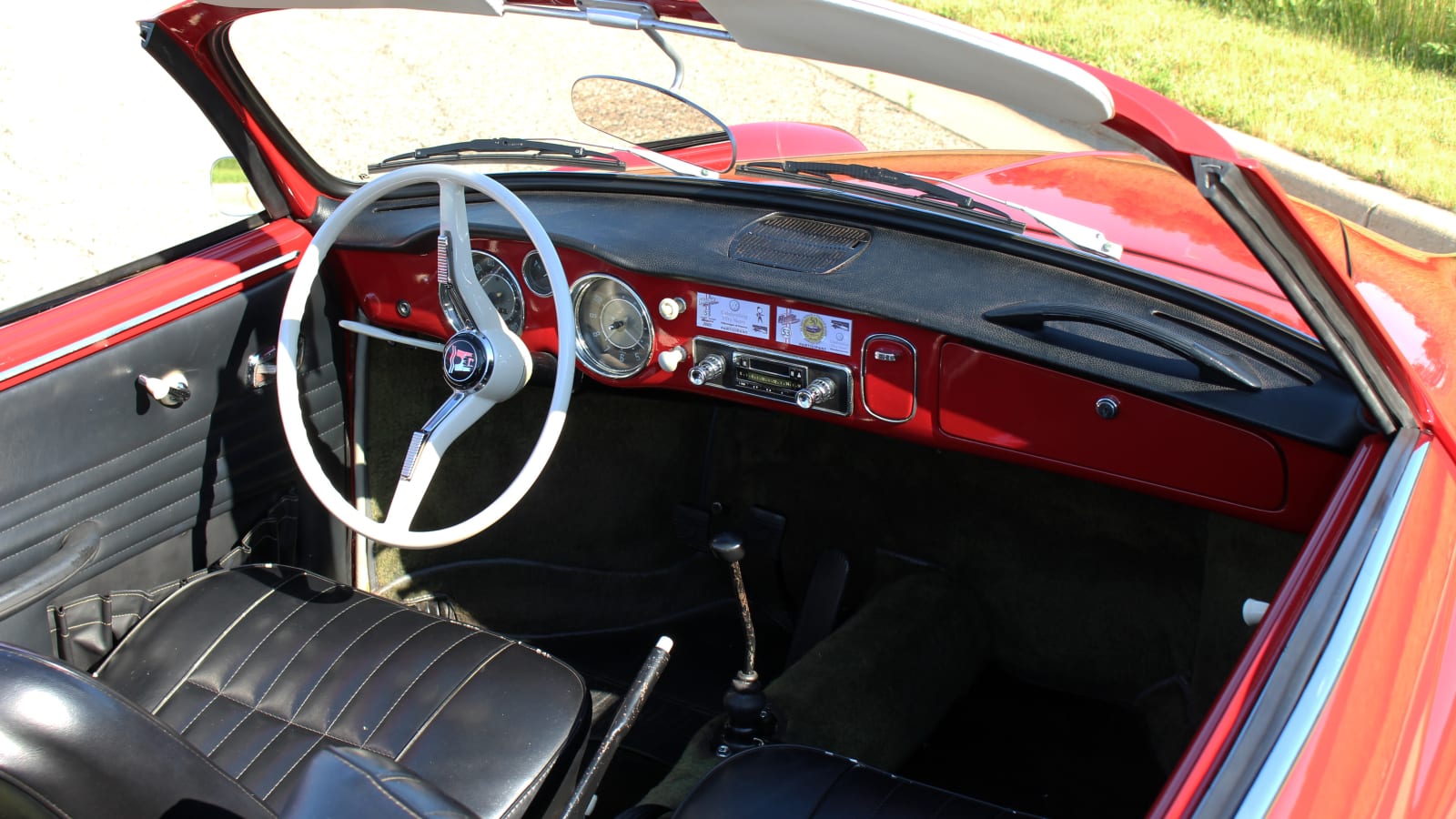 6) It actually handles! Sort of!

When you think of American cars from the early 1960s, adept handling is never top of mind. The Karmann Ghia wasn’t a sports car either, but it is shockingly light and fun to toss around. The rear-engine rear-wheel-drive layout makes for a car that’s unique and dynamically fun.

Sure, the steering has a fair amount of slop in it on center, but once it weights up, the car is happy to dive into corners without causing alarm to the driver. This example had newer rubber on it, but I imagine the Karmann Ghia was still a fun driver with 1964 tire technology, too.

I'll finish how I started: I want an old car now, and the Karmann Ghia is a worthy candidate.