As practical as always but nicer inside and much thriftier

With roughly 7.5 million sold in 20 years, it's safe to say people love the Honda Fit, or as it's called in Europe and elsewhere, the Jazz. "Elsewhere" would be the key term since Honda's versatile subcompact hatchback is not only sold all over the world, it has also been built in 10 plants in eight different countries, including China, where the authorities were so honored to have a Fit factory within their borders, they allowed Honda an unprecedented larger share in the joint venture.

A major reason is safety, which was highlighted from the very beginning. I attended the original launch at Honda’s Tochigi R&D center in Japan, which started with a crash test. The 2,535-pound Fit was subjected to an offset impact with a six-year-old, 4,030-pound Honda Legend sedan at a closing speed of 62 mph. When our ears stopped ringing, the Fit’s crash-test dummy passengers were shaken but intact, the doors opened and the passenger cell retained its shape. The Legend’s passengers didn’t fare so well, with the pedal box detaching from the firewall taking the driver dummy’s feet with it.

Part of this early emphasis on safety was perhaps to assuage any fears about sitting atop the fuel tank, as the Fit's was uniquely placed under the front seats protected by chassis members. This design has been common to every generation, including the all-new Honda Jazz seen here, and makes it possible for the amazing rear seats, originally called "Ultra" and now known as "Magic Seats" to exist. Distinctively, the backs can be folded flat onto the bases to create an ultra-low load floor, or the bases can be folded up against the back leaving a big empty well in the middle of the car to swallow yucca plants or German shepherd dogs. The result has been unmatched space and versatility for the segment, something that continues with the new version.

What wasn’t clear in Japan 19 years ago was just how reliable the Fit would prove. It regularly tops reliability surveys and (partly) as a result, it tends to appeal to an older constituency of buyers who value a car that starts every morning and costs just cents in maintenance over rival subcompacts that looked better, drove better or had more premium cabins. 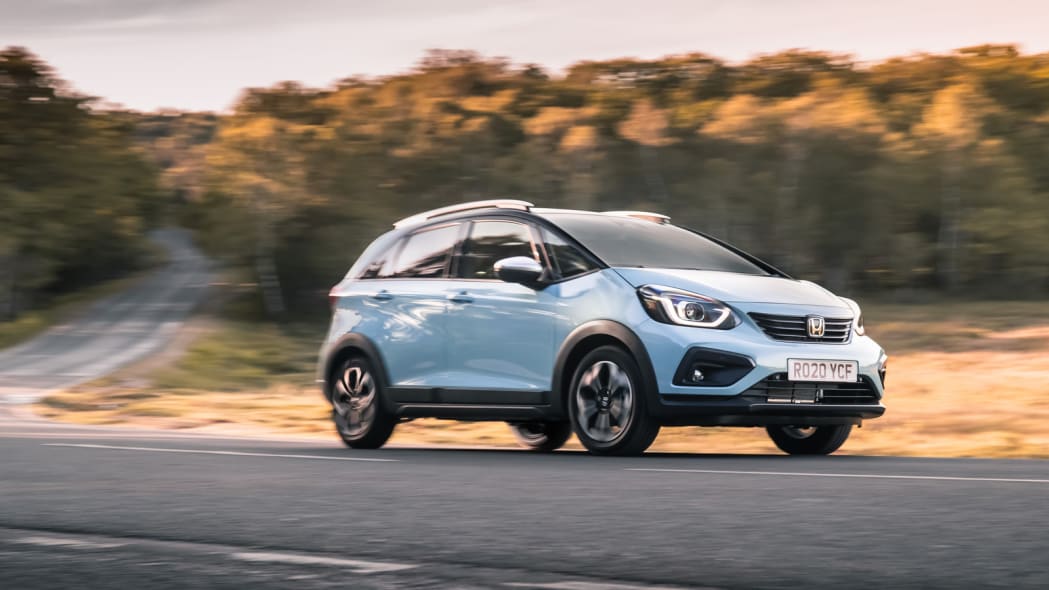 In Europe, those reasons were enough for the Ford Fiesta, Opel/Vauxhall Corsa and Mini Cooper to ultimately outsell it. In the United States, it's been less a matter of competition than the market's disinclination from both subcompact cars and hatchbacks. The runaway popularity of crossovers doesn't help either, and although the new Fit/Jazz will be available in the crossover-lite Crosstar model shown above, the future of the Fit in the States remains in doubt. Whether the next generation will come, and if so in what form, still isn't entirely clear. Nevertheless, we managed to snatch a drive in the European version of the new car to see what you might be getting – or missing.

On the outside, the new model is at 159 inches long, 0.55 inches longer than its predecessor. It’s 60 inches high, which is almost an inch lower and about the same width as before at 66.7 inches. The Fit Crosstar is a tiny bit longer and wider, but quite a bit higher.

Climb in, and the Mark IV Fit’s cabin materials are of a higher quality than in its predecessor, though some of the plastics are wincingly old-school. There are odd-looking fiber pads on the dashboard, and the driver’s digital instrument binnacle looks like something you give a toddler on which to watch "Dinosaur Train." Storage space is reasonable, with a deep but narrow center console cubby, door pockets that will accept a small drink bottle, and two glove boxes. The feel is of a more finessed and refined version of the old car, but it’s not without its quirks. 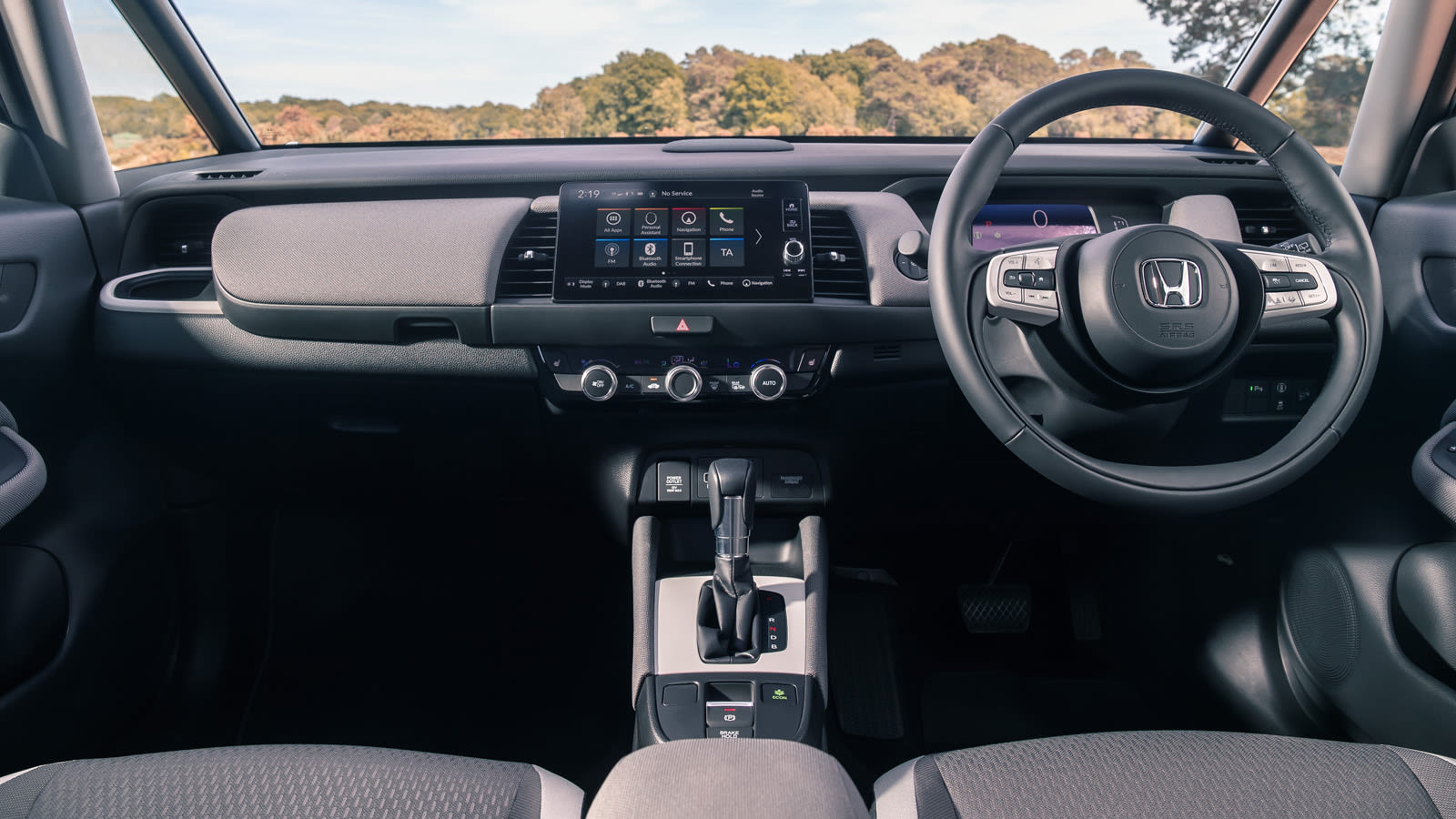 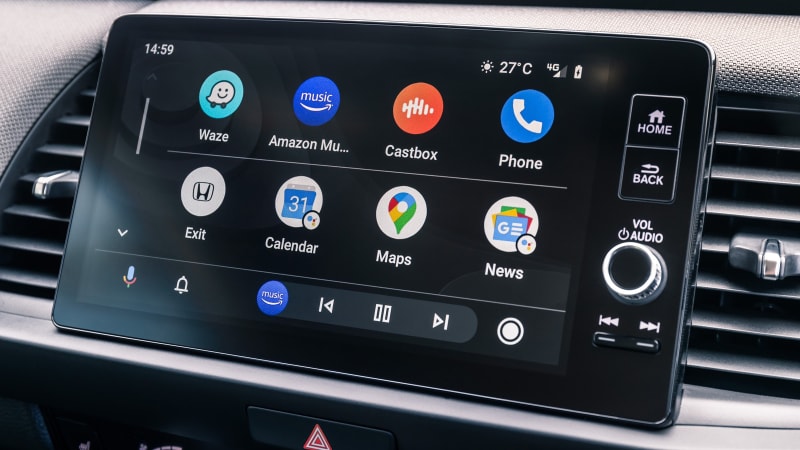 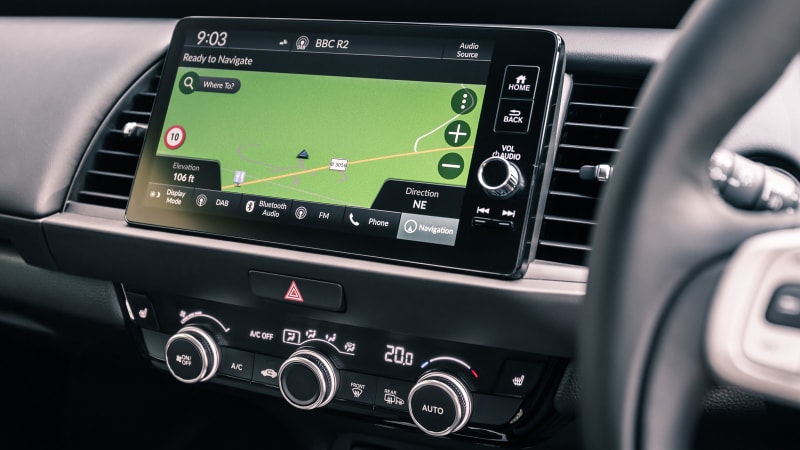 The central touchscreen for instance, which is certainly improved with more attractive graphics and an enlarged 9-inch display, has more than 20 different touchscreen functions. It's a distraction. And as with all Hondas, the switchgear is willfully weird, like the massive screen backlighting dimmer switch, or the ultra-complicated procedure to switch off the lane-keeping assistant. However, there are multiple USB ports, and (at least in the U.K.) every Fit but the base trim gets standard Android Auto and Apple CarPlay.

Generous seat adjustment and extra steering telescoping make it easier to get a good driving position, while forward visibility has been improved by windshield pillars that are half as thick as before. With more generously cushioned bases, the front seats are much more comfortable, and the same goes for the newly upholstered rear bench, which used to have all the comfort of a Little League bleacher. The Fit is strictly a four-seater since the sloping roof sides and restricted width mean three adults would be very cramped in back. American-market cargo capacity numbers aren't available (and European ones would be incomparable), but the "Magic Seats" continue to make the Fit as practical as always.

Our test car was the top-model trim, which includes spiffy leather-and-fabric upholstery as well as heated seats, a rearview camera, sat nav, premium stereo and 16-inch alloy wheels over the lower trim grades.

Safety is comprehensive. "Honda Sensing" is standard and now includes a new range-finding hazard recognition system, which dispenses with radar and uses instead a wide-view camera. Automatic emergency braking is not only standard, but has a wider range of operation and recognizes cyclists and pedestrians. All trim levels come with adaptive cruise control and lane-keeping assistance, which can now detect grass road edges as well as painted white lines. Blind-spot information and road-departure mitigation are also included and there are 10 air bags in all models. These features, or at least the previous generation of them in the U.S.-market 2020 Honda Fit, only show up in the EX and EX-L trim levels. Should this next-generation model arrive here, we would expect that Honda Sensing would now similarly be standard across the board. 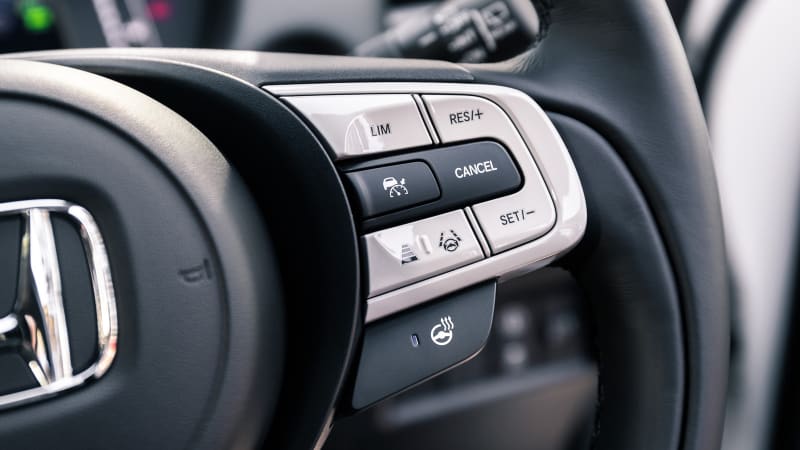 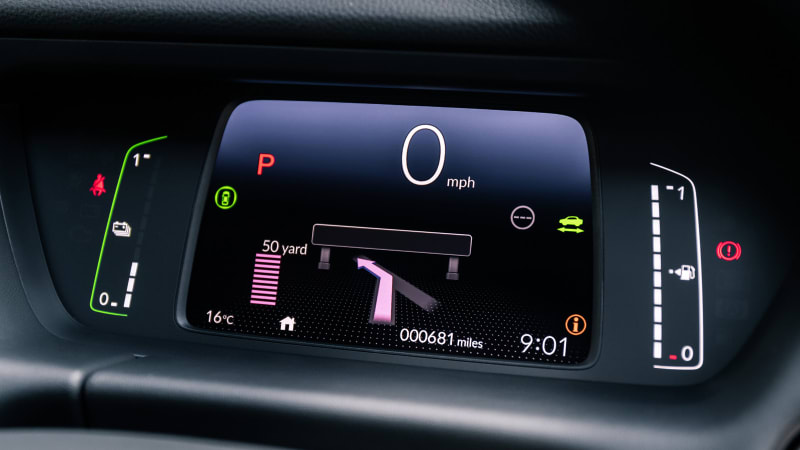 Under the hood is just one option, Honda’s new Intelligent Multi Mode Drive (i-MMD) hybrid system, which works on the same principle as Honda's other hybrid models. Like the Insight, it has a 1.5-liter, Atkinson-cycle, four-cylinder gasoline engine (the Accord and CR-V hybrids have 2.0-liter engines) and twin Direct Current pancake motors, the smaller of which also acts as a generator. The gas engine sits in series with and upstream of the electric motors and in most cases the engine drives the motor/generator, which provides electricity to drive the car.

Dubbed "e:HEV" starting with the new Fit, this powertrain automatically selects among three driving modes depending on conditions: EV mode where the car drives as much as possible with its battery; Hybrid where the engine drives the generator, which drives the motor, which drives the wheels; and Engine Drive, where a clutch closes to bypass the electric motors and connect the engine directly to the wheels to increase efficiency for medium-speed cruising.

At no time does the engine and either of the electric motors directly drive the car, and since the larger electric motor is more powerful than the gas engine, the total system output is basically that motor’s 107 bhp/187 lb ft output. Top speed is 109 mph, with a 0-62-mph sprint of 9.5 seconds. I managed 50 mpg during my drive. The current American-market Fit with its available CVT returns an EPA-estimated 36 mpg combined. 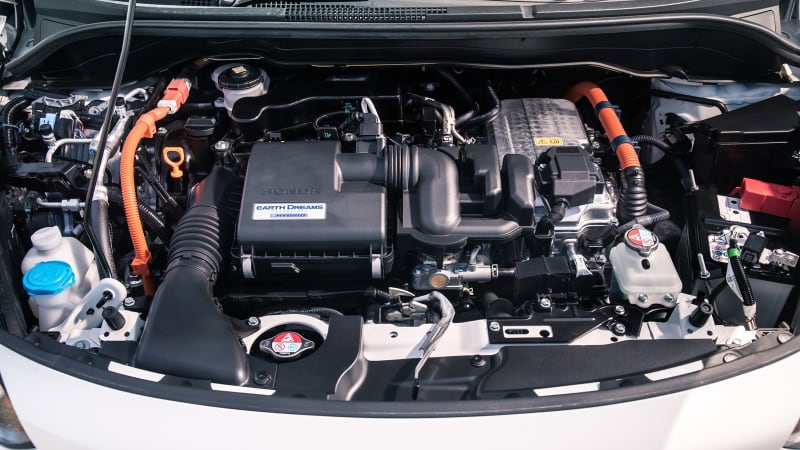 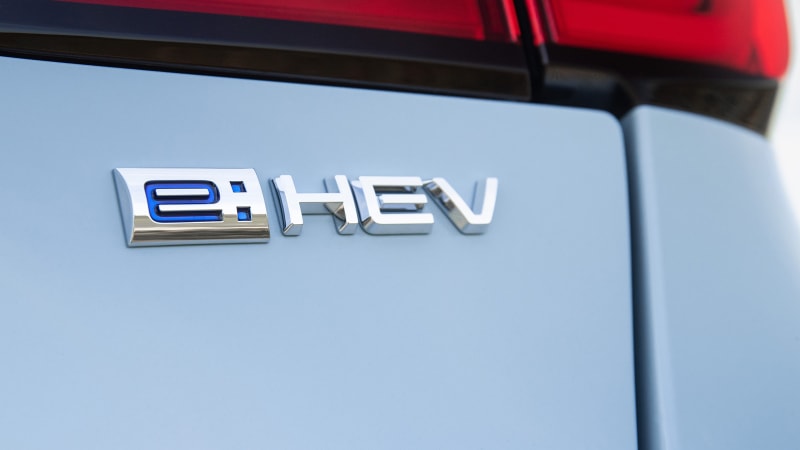 Start up, and the drivetrain software will try to start off using battery power, although the engine soon makes its presence felt. In normal urban driving it stays pleasingly in the background and the electric motor has a quiet warbling hum. Accelerate, and throttle hookup is brisk, which limits the rubber-band effect at modest speeds. And the typical high-torque characteristics of the electric motor make the Fit feel, well fit, despite its 2,747-pound weight. Stand on it, though, and the revs soar, and while the system provides some artificial steps in the power delivery that sound like gears (something not found in the American Honda hybrids), you’ve got to be absolutely belting it to hear these. Thankfully, it’s a Honda, so it loves to rev and it sounds pretty good when absolutely belting it, but like Toyota’s rival system in the European-market Yaris, the engine's operation still feels a bit unconnected with the throttle.

There’s decent braking via all-round discs, and a nicely progressive pedal feel even at low speeds, which is often a sour point in hybrid cars. The suspension consists of front MacPherson struts and a rear twist beam, all of which have been gently updated for this new model. It’s certainly an improvement, but on the EX model’s 16-inch wheels, the Fit clatters away at road surfaces, bouncing and galumphing at the front and heaving a little at the rear. Sharp-edged bumps do most damage in this respect, with audible thumps and sharp reactions. 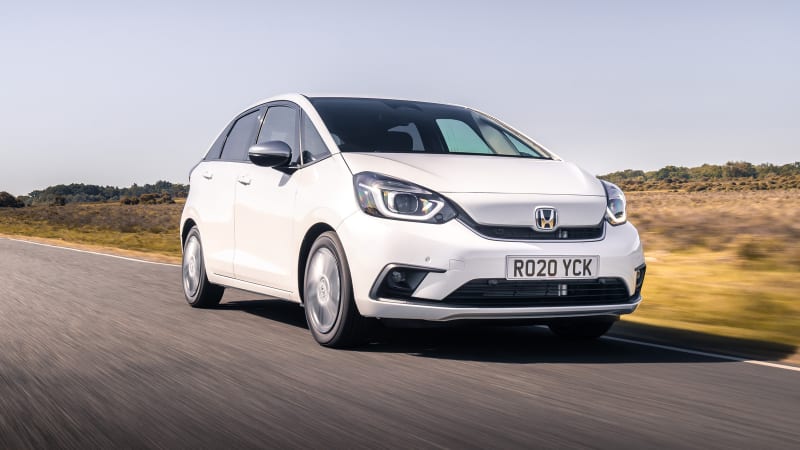 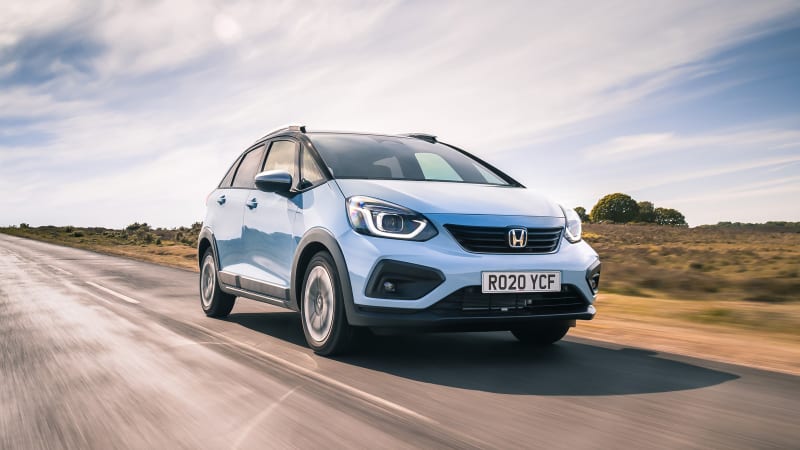 A short drive in the larger but more softly-sprung Fit Crosstar on the same roads revealed that while it rolls through the turns like a barrel over Niagara Falls, the ride quality is much better judged.

The standard Fit’s handling isn’t bad, though this isn’t a car you’d push through the turns for the sheer joy of it. The control weighting is good and the new variable-ratio steering is certainly precise with pleasing amounts of weight, but there’s little progression or feeling of a buildup of forces. You can over drive this car with quite hilarious results, but European supermini rivals would leave it for dead on a twisting road.

If you’ve already got a Fit and are looking to replace it, this is a better car, improved in every area, with a more comfortable and classier cabin. It’s also economical, well put together, and if the past is any guide, should be ultra-reliable. U.K. prices start at the equivalent of $24,115, and the EX model driven here is $27,171, and although the United States would likely see a discount of 8% or so, the Fit would still, theoretically, continue to cost more than other subcompacts. With its quality and space, it has always seemed worth it, though. Should this next-generation Fit actually make it to the States, we expect that to continue.