One change is annoying, though

At three years old, the 2020 Honda Civic Type R is getting its first midcycle refresh. You’ll recognize it by its body color grille accents, a bigger grille opening and a little less mesh over some of the fake vents. But it’s the mechanical tweaks and added features that make the newest Type R better than before in almost every way, and slightly worse in another.

Under the skin, Honda has focused on brakes and suspension. The new Type R now has two-piece rotors that Honda says dissipate heat better. While we didn’t notice any major improvements on the street from the rotors, we were pleased by the new pedal tweaks. Travel has been reduced for more rapid response, which is clearly noticeable. There’s basically no dead zone in the pedal anymore. It provides a firm, communicative feel, and it’s a breeze to dial in the exact amount of stopping power you want. 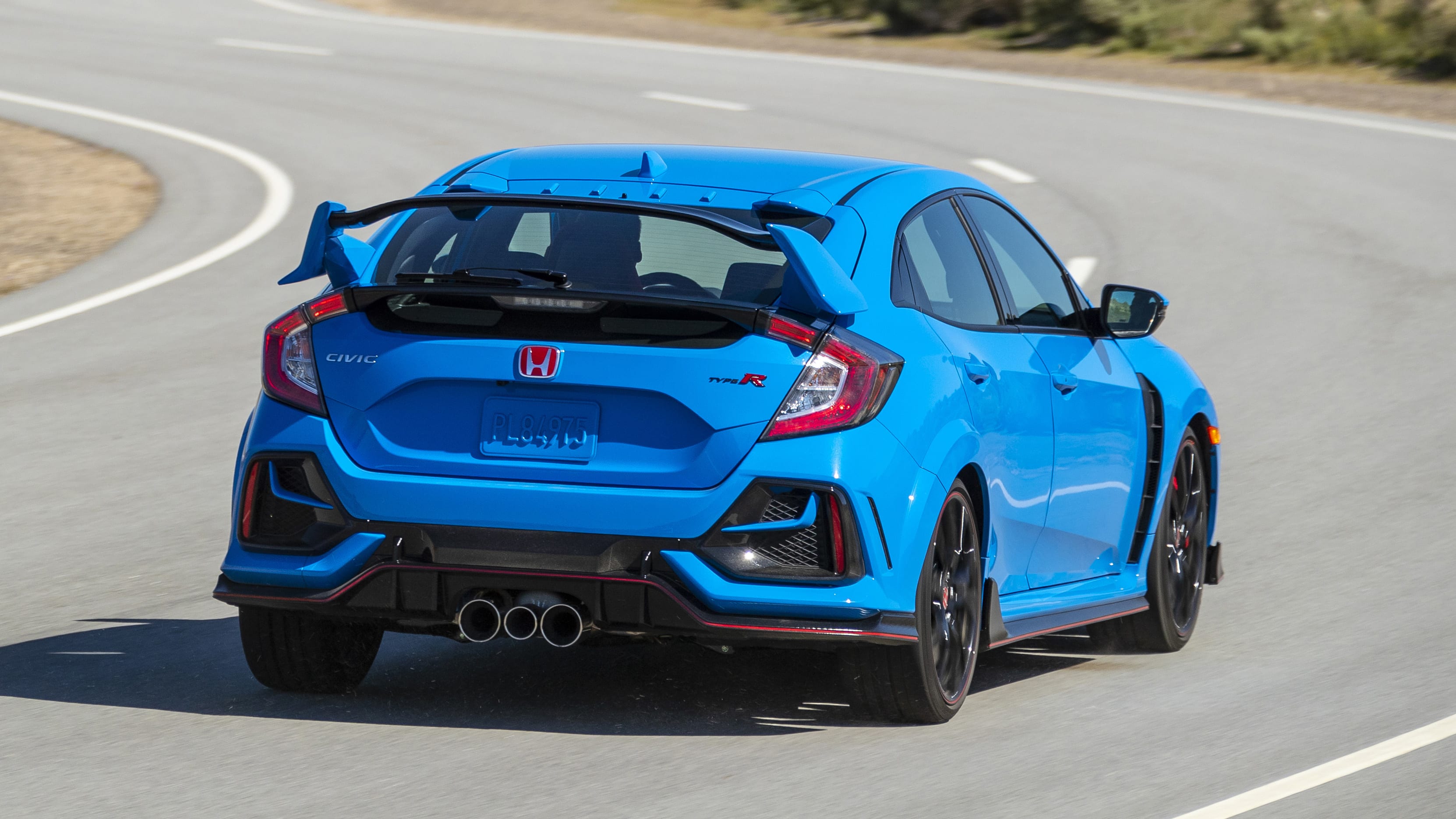 The front suspension has lower-friction ball joints, and there are new bushings front and rear, which Honda claims provides better steering feel and stability in corners. Again, on the street that extra stability is hard to discover, but the wheel does seem to tell your fingertips a little bit more, particularly in the sportiest +R mode. Combined with its millimeter precision, something shared with last year’s car, the Type R is one of the best steering cars in its class.

The adaptive suspension has been updated as well, most notably with new control software that reads input from various sensors 10 times quicker than before to consequently improve handling and ride quality. The settings have also been generally retuned to feel stiffer in the sportiest “+R” mode and more compliant in the soft “Comfort” mode.

Certainly, the +R setting is stiff. On the highly textured roads of southeast Michigan, it was almost unusable. Series of bumps had the car bouncing and bucking, which could be disconcerting on fast, curving highway ramps. It did virtually eliminate body roll, though, so we’re certain it would be the best choice for race tracks, autocross courses and smooth roads. 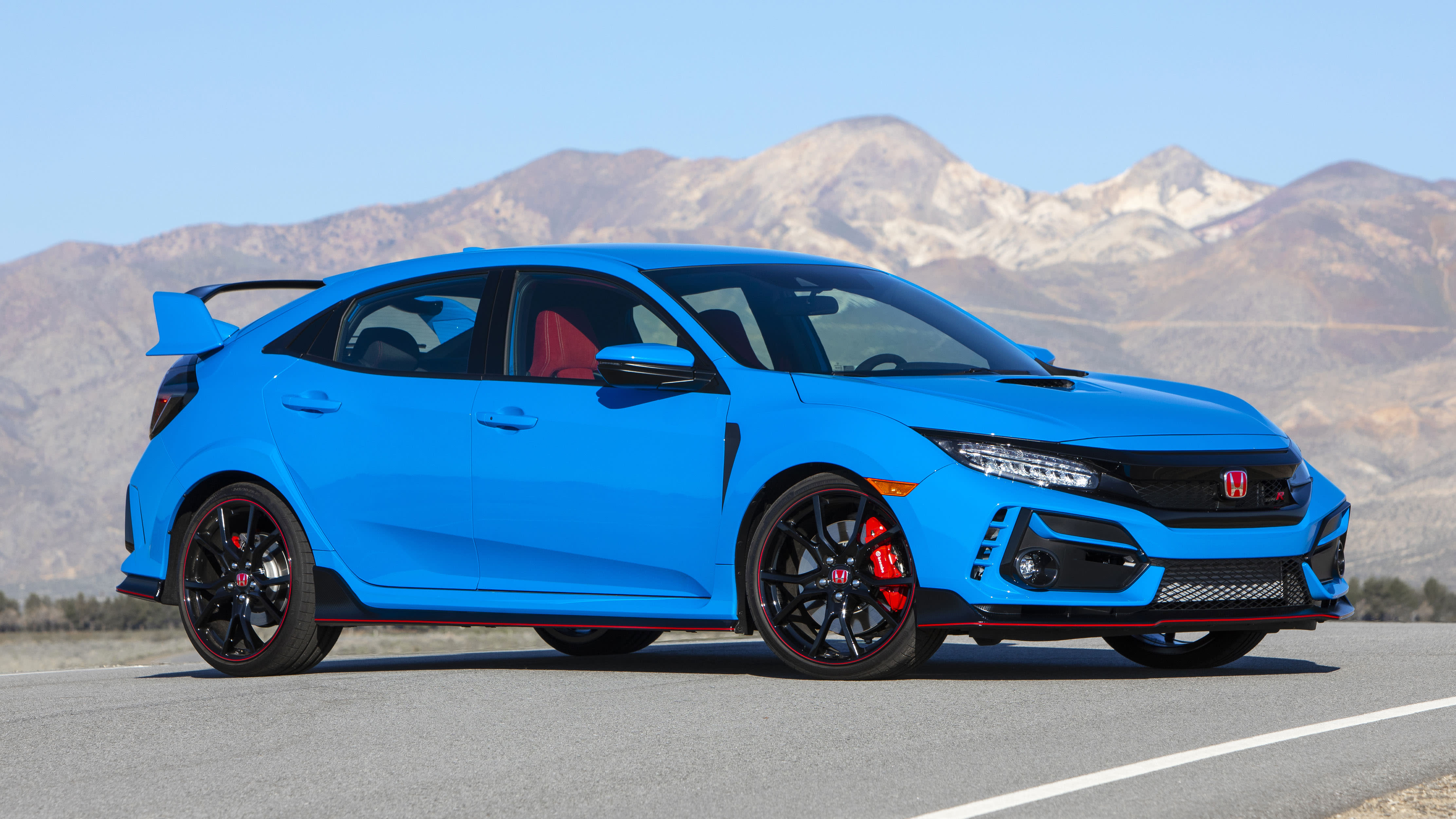 For around Detroit, though, the default “Sport” setting was the sweet spot for enthusiastic driving, giving a bit more compliance without adding much body roll. When it was time to just cruise, Comfort mode shone, offering a smooth ride that would seem impossible to achieve with the huge 20-inch wheels and rubber band tires. You do notice a bit of roll in this mode, but the car still reacts quickly and confidently even in this setting. Also, regardless of setting, the Civic Type R feels light, tossable and communicative. It’s a breeze to balance it in corners, reducing throttle to tuck into a corner, and adding it back to straighten it out.

Although the bigger grille and an updated radiator core provides extra cooling for 2020, the turbocharged 2.0-liter four-cylinder remains the same, producing 305 horsepower and 295 pound-feet of torque. It pulls hard to redline, and can even break the front tires loose on a hard launch or powering out of a tight corner.  Despite this, the suspension and steering never let it cause torque steer, which is an impressive feat for such a potent front-drive car. Power delivery isn’t the smoothest, though. Unless you’re keeping the revs up, it can take a moment for the turbo to spool. It’s not nearly as bad as in a Subaru WRX or STI, but not nearly as responsive as a Hyundai or Volkswagen.

There’s one last note on the mechanical side of the Civic Type R. It still has the best shifter in the segment. It’s unchanged aside from a differently shaped and heavier shift knob, but it still delivers short, light and precise shifts. It is still a bit notchy compared with older Hondas, but none of the Honda’s competition feels as quick and crisp. 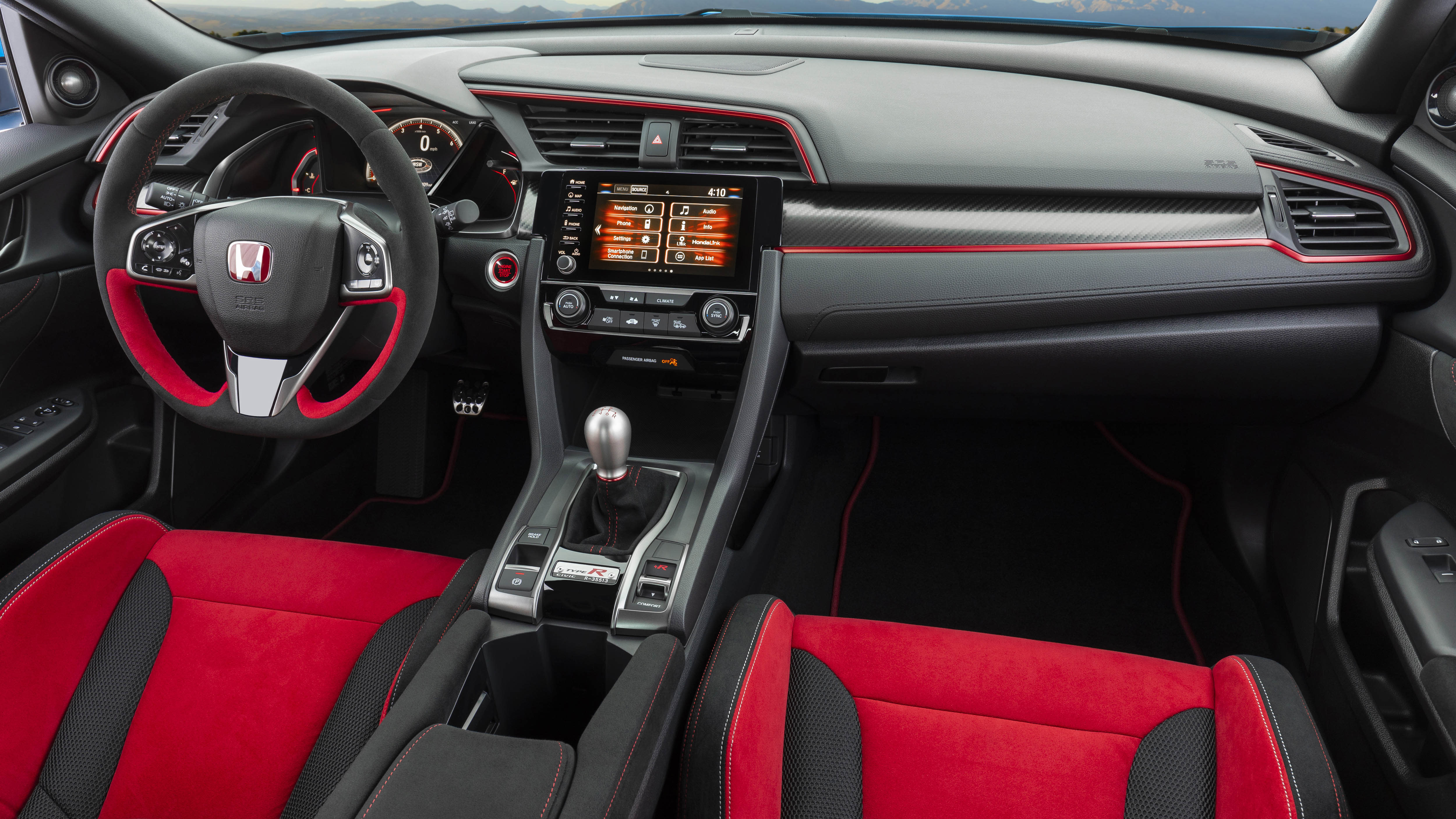 Moving to the interior, the only immediately obvious changes are to the aforementioned shift knob and steering wheel. The latter is now covered in Alcantara rather than leather This editor prefers leather, but that’s something that will be different from individual to individual. The wheel is matched by an Alcantara shift boot. Look closer, though, and you’ll see evidence of the now standard Honda Sensing suite of driver assist systems: the Type R finally joins the rest of the Civic lineup in providing adaptive cruise control, automatic emergency braking and lane-keeping assist.

There’s actually one more thing Honda added to the interior, and it’s the one thing that makes the 2020 Type R worse than the old model: electronic engine noise. The Type R has an extremely smooth and oddly quiet engine and exhaust for such an extreme-looking car, and the extra noise is meant to amplify the best sounds for enthusiasts to enjoy. It does have a good tone, and it doesn’t sound as artificial as other cars that attempt the same thing. But it’s frustrating knowing it’s not actual noise. More frustrating is that it’s loud and boomy, even in its quietest setting in Comfort mode. Add in the Type R’s plentiful road and tire noise, and you get a seriously noisy cabin. It’s not bad when you’re out for a backroad blast, but it could wear on you during a long drive. The worst part though, is that you can’t shut it off completely, something possible in the Type R’s competitor, the Veloster N.

Also frustrating is the Type R’s unchanged infotainment system that remains slow, ugly and annoying to navigate. Quite simply, every Civic should have the same updated system found in the Honda Insight, which for all intents and purposes, is just a Civic hybrid. This is especially true in the range-topping Type R. That said, since the system is the same as last year’s, it doesn’t make this model better or worse than before.

We finally come to the Type R’s price, which is another point in the 2020 model’s favor. It’s only $695 more than the 2019 with a base price of $37,950. Considering the amount of extra convenience features and light tweaking, it makes the Type R a better value than it was before, even with the slight upcharge. And for outright performance, the Type R makes a strong case against its competition. The VW Golf R starts at more than $40,000, and while it provides all-wheel drive, it’s heavier and less powerful. The Hyundai Veloster N is significantly cheaper, but also lacks the Honda's power. The Golf does offer a more comfortable and refined experience, and the Veloster N offers performance and feel close to the Honda for a bargain price, so they still have merit. But for outright performance, the Honda remains a leader.

On the whole, the 2020 Civic Type R is the best version of the hot Honda yet. It adds more value, and drives better than last year's already riotous version. Even with some small gripes, it’s a hatchback we can happily recommend, and is the clear choice for someone looking for an out-of-the-box performance machine that still offers practicality and livability. 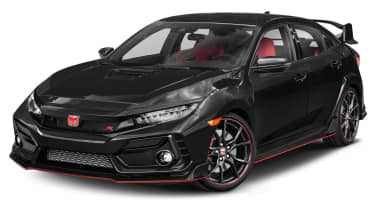 $325 - $325 Nat'l avg. savings off MSRP
See Local Pricing
I'm not in the market for a vehicle at this time. Please move this suggestion to the side for 30 days.
Huge Savings