Mansory does not care if a car is rare or special or unique. If it's not a Mansory, it's probably not good enough. But it might qualify to become a Mansory. The aftermarket tuning and design company has captured the limited Aventador SVJ and transformed it into a new vehicle called the Cabrera, which sports new looks and has more power.

Lamborghini will only produce 900 Aventador SVJs, and of those 900, three will go under the knife at a Mansory workshop. Mansory quotes a motto, "one car per decade," and says the Cabrera "marks the start of several special editions on the occasion of Mansory's 30th anniversary in 2020." The name Cabrera is a breeding line of the Spanish fighting bull, similar to the names Miura and Gallardo.

The Cabrera has an entirely distinct face thanks to a new set of LED headlights. Rather than the chunky stock units that point toward the rear of the car, the new four-unit headlights are slim and horizontal. With the adjustments to the headlights came tweaks to the hood and front fascia. New air inlets on the front apron improve radiator air flow and help improve downforce. The carbon fiber widebody kit, which adds 1.6 inches in width, continues with bulbous wheel arches, aerodynamic side skirts, and a rear "double diffuser." Extra downforce comes courtesy of a massive angular rear wing, and aggressively designed forged lightweight wheels (9x20 and 13x21) are wrapped in Pirelli P Zero tires.

Inside, Mansory takes the Aventador's fighter-jet inspiration literally. The forged carbon fiber has "arrow-shaped decorative seams," that look awfully similar to stealth bombers. That's also mimicked with imprints in the seats. Every part of the interior has been redone and refitted with upgraded materials, including the ceiling, which has a colorful accent spine.

The Cabrera is only one of many vehicles that were launched surrounding the canceled Geneva Motor Show. Other new custom creations include the Lamborghini Urus Venatus and the Bentley Continental GT V8 Convertible. 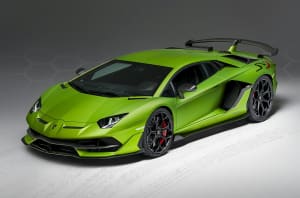