Discover the two coupes Bugatti wanted to sell alongside the Chiron

These never-before-seen concepts should have bookended the Chiron

Bugatti has released two cars since it joined the Volkswagen Group in 1998: the Veyron and the Chiron. Both are high-horsepower, multi-million-dollar machines built in strictly limited numbers. That wasn't the original plan; executives envisioned a three-car range during the 2010s. Autoblog went right to the source to discover a pair of coupes — one below the Chiron and one well above — that were cancelled and have never been seen before.

The French company first attempted to revive the practice of coachbuilding in the 2000s, but it shifted nearly every part of the process in-house because a majority of the companies it worked with during the 1920s and the 1930s were long gone. While this added significant costs and complexity, the success of Lamborghini's few-off models (like the Reventón) proved collectors were ravenous for exclusivity and more than willing to pay a lot for it.

"We were not sleeping on the horse. Starting in 2004, I was constantly giving management ideas about what we could do next to the Veyron, on its base, or after it. Most never saw the light of day," Achim Anscheidt, the soft-spoken head of Bugatti's design department, told me as we walked through the company's styling center. 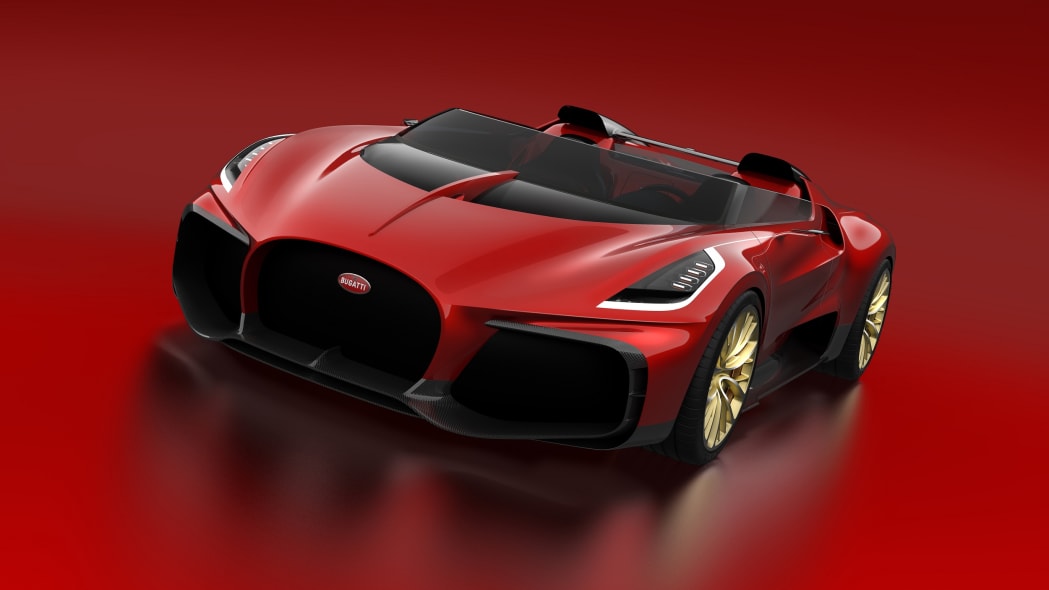 With coachbuilders like Henri Binder, Park Ward, Kellner, and Figoni & Falaschi out of the picture, the task of creating a new body fell into Anscheidt's lap. While he experimented with many projects, one he shed light on is a barchetta-like open-top two-seater (shown above) based on the Veyron Grand Sport. It featured the short, boat-like wraparound windshield that has historically characterized the body style, though "it could have been done as a roadster with a conventional windshield." Its proportions are recognizably Veyron-like, but the similarities end there. Its front end wears a vertical lights and bigger grille flanked by wide air intakes, styling cues later seen on the Divo.

If built, the Veyron Barchetta would have arrived as a limited-edition model with a correspondingly high price tag, in part to offset the sky-high development costs. But as Lamborghini chalked up hit after hit, including the Sesto Elemento introduced at the 2010 Paris show, Bugatti's top executives were reluctant to adopt this business model. "They couldn't give themselves the push to make it happen," Anscheidt said with a tinge of regret.

He reluctantly consigned the idea of modern-day coachbuilding to the attic but he never stopped thinking about how to expand the Bugatti range. And, while coachbuilt Veyron offshoots were swiped from the table, other projects blossomed in the company's design center. The idea was to forge a three-model range made up of a coupe called Atlantic positioned at the bottom of the company's line-up, the record-breaking Chiron released in 2016, and an ultra-exclusive, almost unobtainable range-topping two-door envisioned as a work of art on wheels. 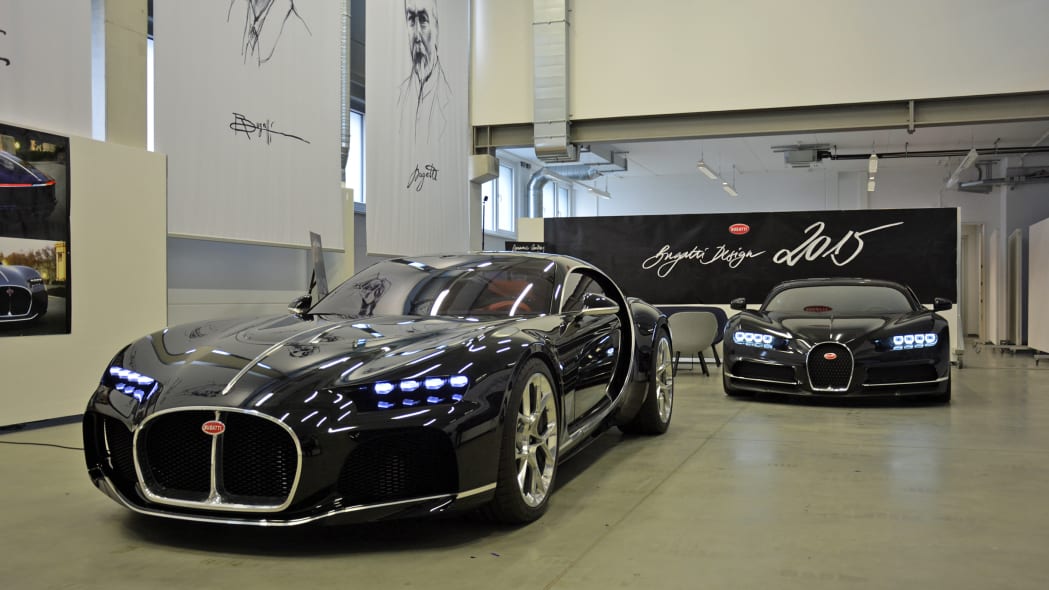 Named after one of Bugatti's most emblematic past models, the Atlantic was created as a two-seater with a carbon fiber monocoque and parts sourced from other Volkswagen-owned brands when appropriate. Its proportions are completely different than the Veyron's and the Chiron's, they're arguably more in line with Bugatti's heritage, because the long hood hides a V8 engine that spins the rear wheels via a transaxle for better weight distribution. Bugatti chose to use one of the group's turn-key V8s rather than cleave a W16 in half.

The power-operated doors swing upwards thanks to a hinge mechanism similar to the one used on the ultra-efficient Volkswagen XL1. They reveal an interior partially upholstered with thick, two-dimensional leather closer to what you find on horse saddles than in high-end luxury cars. It's even more gorgeous in person than in photos.

As development work continued at a productive pace, stylists turned their attention to the bigger model. While the Atlantic wore an almost retro-inspired look, the W16 Coupe — a temporary internal name — went in a bolder direction with a front end inspired by the Veyron Barchetta and an almost Chiron-like rear end. It never made it past the drawing board so it only lives on in Anscheidt's memory and in a couple of design sketches shown here. 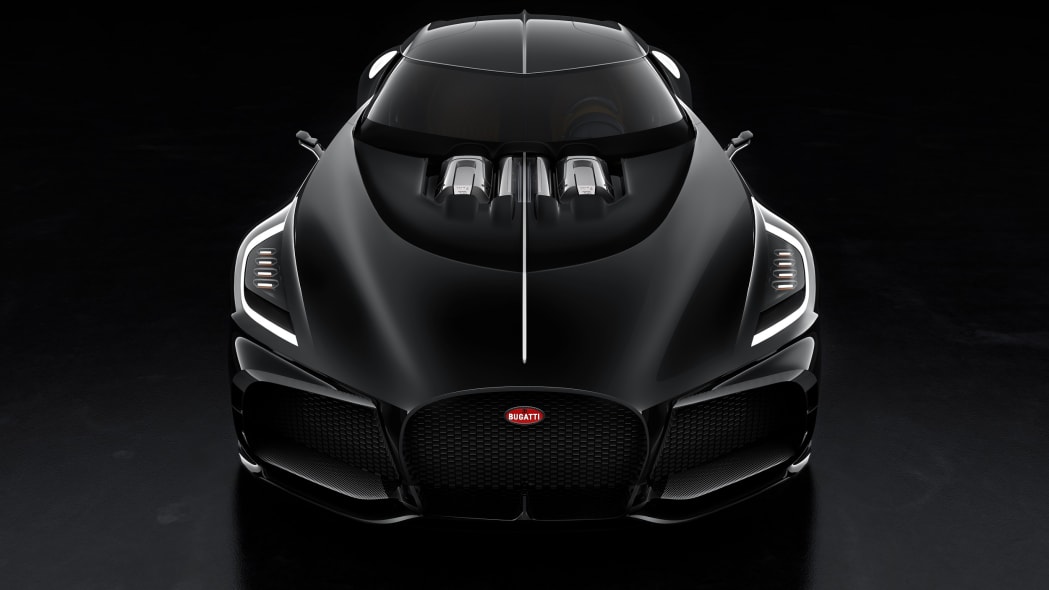 "It's quite a bit bigger; it has the same proportions [as the Atlantic] but it's as exclusive as it gets. Nothing here is off the shelf, nothing here has anything to do with the group. This is almost like developing a race car," he explained, adding total production would have been limited to a handful of units likely priced above $15 million, and possibly north of the $20-million mark; Bugatti never made a final business case for it.

Anscheidt remembered the Atlantic, though not fully approved for production yet, was tentatively scheduled to make its public debut at the 2015 edition of the Pebble Beach Concours d'Elegance. The various posters decorating the design studio's walls all reference that date, but the launch was pushed back and the delay proved fatal. The far-reaching Dieselgate scandal fulminated less than a month after the world's wealthiest enthusiasts convened on California's picturesque Pacific coast and sent all of Volkswagen's brands into panic mode. Bugatti worried about its future more than others because it's the smallest and most fragile part of the automaker.

"Our president at the time, Wolfgang Dürheimer, pulled all the strings just to get Bugatti to a black zero so we were at least not costing the group money. We needed to be on the safe side to avoid being sold off from one day to another, because, in the first year, nobody could really judge the dimensions of the coming financial catastrophe. Everything was play it safe. It stayed that way for us for nearly two years," Anscheidt explained.

The Chiron was at a much more advanced stage in the development process so it was too late to cancel it. "We were five months away from the 2016 Geneva Auto Show where we planned to unveil it," Anscheidt explained. He candidly told me executives would have otherwise pulled the plug on the project to save as much money as possible, and they would have put Bugatti in a "freeze frame" while they riddled out what to do with the brand.

It goes without saying that the bigger, W16-powered model wasn't built, either. Its spirit lived on, however.

"We showed it to [company president Stephan] Winkelmann. He said 'I really, really like it, it's super exotic, we would find customers that would be interested in that. But, there's no chance in technical development we can make this fly, we have so many things do to. Can we not create this story, La Voiture Noire, on the base of the Chiron?' That's where it all started," he revealed, referencing the one-off, $19-million coupe unveiled in 2019. The former Lamborghini executive gave Anscheidt the freedom he needed to make the La Voiture Noire a reality, and he played a key role in fast-tracking other projects (like the Divo and the Centodieci) to production.

What's next? It's too early to tell, though Winkelmann has hinted at a second model in recent months, and he indicated it would be positioned as a more daily-drivable (and cheaper) alternative to the Chiron. While the Atlantic was obviously never made, it's significant because it illustrates Bugatti's vision of an entry-level car. Rest assured; the French company won't pull an Aston Martin by putting its name on one of Toyota's economy cars.

On a secondary but more lasting level, the Atlantic confirms Bugatti doesn't see itself as a single-model, hypercar-only brand. It's well aware of the luxurious, touring-oriented cars in its past and it's open to the idea of again exploring that side of its identity. Whatever it releases next won't look like the Atlantic concept, though.

Its 15 minutes of fame are over, and it's back in Bugatti's top-secret warehouse as you read this. Looking ahead, its best-case scenario is one day ending up in a museum. Alternatively, it might never be seen in public again. Regardless, Anscheidt was delighted to finally have the opportunity to reveal the Atlantic — though not in sunny California, triumphantly surrounded by its champagne-sipping target audience — and tell the world it.

"It makes me quite happy that these kind of things are not ending up in the cellar forever for nobody to see them."