Bugatti Divo revealed, all 40 are already spoken for

After numerous teasers, the Bugatti Divo has finally been revealed. I will thus take this opportunity to type "whip it good," mention funny red conical hats and move onto something only slightly less ridiculous. The Divo cost €5 million each for the 40 people who have already purchased the limited production run. So sorry, you missed your chance.

The Bugatti Divo is quite obviously based on the Chiron. Though it shares that car's 8.0-liter W16 engine, it is 77 pounds lighter and is capable of producing 198 extra pounds of downforce. Basically, while the Chiron is all about top speed, the Divo is more about taking corners. To that end, its lateral g is said to be 1.6 g, which is a staggering number, and its maximum speed is limited to only 236 mph.

"To date, a modern Bugatti has represented a perfect balance between high performance, straight-line dynamics and luxurious comfort," said Bugatti president Stephan Winkelmann. "Within our possibilities, we have shifted the balance in the case of the Divo further towards lateral acceleration, agility and cornering. The Divo is made for bends." 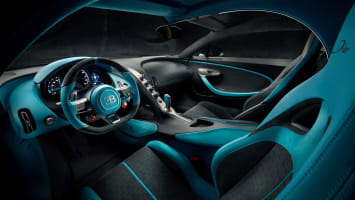 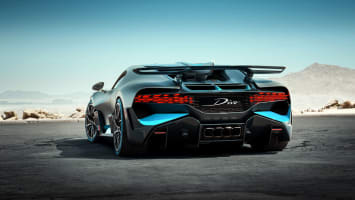 The newer, wider front spoiler contributes to that extra downforce, along with a new rear diffuser and a 23-percent wider rear spoiler that remains automatically height adjustable and still functions as an airbrake. It's a whopping 6 feet wide. Tweaks up front also create an "air curtain" that optimizes air flow along the Divo's sides. Besides creating extra downforce, aerodynamic changes also increase cooling to the engine and brakes.

The Divo also gets special suspension and steering settings to maximize handling. That includes increasing camber. Weight was reduced by using lighter wheels and a carbon fiber intercooler cover, along with a reduction in sound insulation, a lighter sound system and fixing the otherwise adjustable front diffuser flaps.

According to Bugatti, the resulting changes result in the Divo lapping the Nardo handling circuit 8 seconds faster than the Chiron can. Its 40 owners are sure to be super impressed by that.

Like the Veyron and Chiron, the Divo is named after a driver from the early years of car racing. Specifically, Albert Divo, the two-time winner of the Targa Florio in the 1920s. He did not look like this.