Long after the heat of the moment, I pull off the highway in rural Portugal and glance at the Bugatti Chiron's center console. As the engine cools and the carbon silicon carbide brake rotors start to dissipate heat, the onboard computer's telemetry reveals some staggering figures: A peak speed of 377 km/h (do the math, and that's 234 mph), with the quad-turbocharged W16 squeezing a max of 1,466 horsepower at 6,691 rpm.

Did I just drive a car or fly a plane?

The mind-boggling brain shuffle of Bugatti's latest land rocket cannot be understated, even when placed in context against the now-defunct Veyron. In ultimate Super Sport trim, the Veyron produced a stunning 1,200 (metric) horsepower. The Chiron's leap to 1,500 ponies required considerable development, testing, and re-engineering. That exhaustive process saw significant challenges, even late in the game. Consider the high-speed testing incident in South Africa: despite extensive test-bench work, real-world driving revealed that the immense exhaust heat was melting the rear bumper and nearly igniting the car. The solution, it turns out, was to add a duct so airflow from the underbody could channel through and diffuse the heat. Hashtag: #1500HorsepowerProblems. 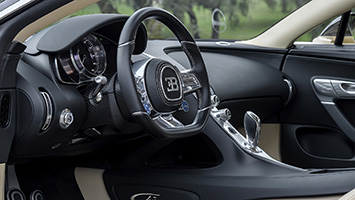 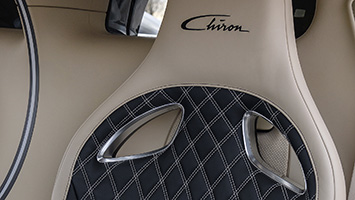 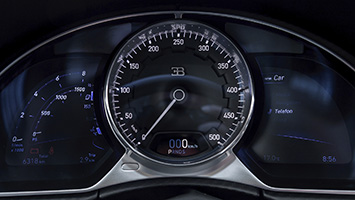 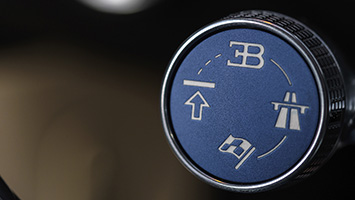 For the 500 wealthy souls who will take delivery, the $2,998,000 Chiron is most certainly an emotional purchase. But it's backed by a battery of left-brain thinking aimed at making it a quicker, smoother, more involving car than its famously controversial predecessor. For starters, only five percent of the engine's parts are retained from the Veyron, the bulk of the new parts getting strengthened, lightened, and re-engineered to better cope with the thermal demands of the heightened output. The four turbochargers are 68 percent larger and now work sequentially so the first set can facilitate a torque plateau between 2,000 and 4,000 rpm. The larger, second set of turbos extend the flat line to 6,600 rpm. The seven-speed gearbox manufactured by Ricardo, which is essentially the only dry-sump dual-clutch on the production car market, has been strengthened and reinforced to withstand the engine's thumping 1,180 pound-feet of torque. The immense drivetrain is housed by a carbon-fiber chassis by Dallara that requires 1,500 hours to build.

The Chiron also gains an adaptive chassis that uses five drive modes to set ride height, steering effort, damping, and power distribution. New 20- and 21-inch wheels are not only lighter, they run up to 50 percent cooler thanks to reworked brake caliper ventilation. The new hoops promise considerably longer wear than the Veyron's famously insatiable appetite for front tires (which ran $20,000 a pair unless you were changing them for the fourth time, in which case you'd be set back an additional $34,500 for two replacement wheels). 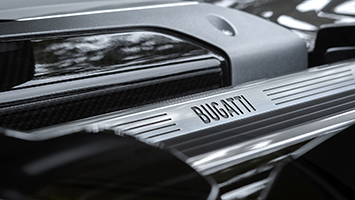 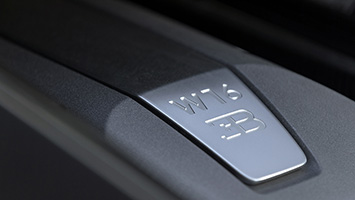 From the driver's seat, the initial impression is entirely digestible: A press of the blue, steering-wheel-mounted Engine button summons all sixteen cylinders and the sound, at least within the cabin, is not as daunting as you might expect. Those on the outside, however, are hit by a deep, hearty bellow from the Chiron's six exhaust pipes. Compared to the Veyron, this cockpit has been cleaned up and streamlined, trading numerous analog gauges on the instrument cluster for one big speedometer needle that sweeps all the way to 300 mph (or 500 km/h, depending on the country it's built for). Three configurable TFTs offer additional information, including a tachometer, a trip computer, and vehicle settings.

Low-speed driving reveals that, well, low-speed driving is all but impossible. That's not because the Chiron isn't tractable or well behaved – it's actually remarkably controllable and docile at legal speeds. Rather, when you graze the tip of the turbocharger's immense boost, you get an irresistible taste of that aircraft-like power. The torque piles on as the first set of turbos spool, tempting you to keep burying the pedal as it tugs your head closer to the headrest. The Chiron's interior is an elegantly understated place where the only distraction from the flawless leather is the subtle glint of anodized aluminum, but those finely modulated details fly out the window as the speed accumulates, diverting your attention towards the rapidly approaching road ahead. 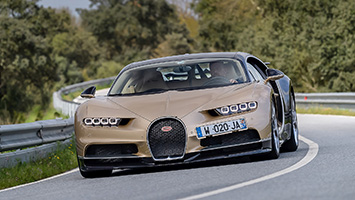 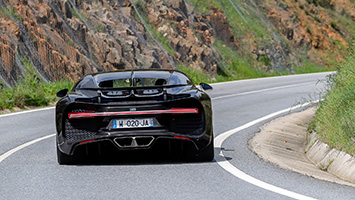 The transmission downshifts somewhat jerkily at low speeds (which Bugatti Chief Test Driver Loris Bicocci attributes to my tester's pre-production status), but above parking-lot speeds the cog swaps are smooth and quite quick, especially considering the heft of the gearbox's moving parts and the massive amounts of torque they must handle. The Chiron delivers palpably more responsiveness and visceral reward compared to the Veyron, and in Handling mode it tackles corners with a taut, glued-down sense of focus. The trick in the bends is to resist the temptation to get back into the throttle too early, which is exactly the same principle you were taught when learning to drive shifter karts (except this time, you're playing with thermonuclear levels of power). The ante is further upped because, at least according to Bugatti brass, the Chiron is capable of drifting in Handling mode. Yikes.

Onto straighter sections of road, the Chiron charges forward motivated by what feels like an endlessly escalating supply of power. Even in manual mode, the transmission will automatically upshift at redline. Considering the tachometer is buried relatively out of sight, it's certainly a good thing to avoid bouncing this very expensive engine off the rev limiter. Perhaps the only things more impressive than the face-flattening acceleration (which can launch the car to 62 mph in under 2.5 seconds and onto a top speed of 261 mph) are the brakes. Just lifting off the gas at high speeds will turn the rear spoiler into an airbrake, flapping it so high in the air that it completely blocks the view out of the rear window. Stabbing the left pedal triggers up to 2 Gs of decelerative force, capable of bringing the Chiron to a full and complete stop from 124 mph in a mere 410 feet. 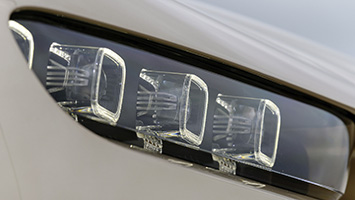 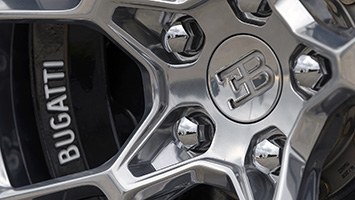 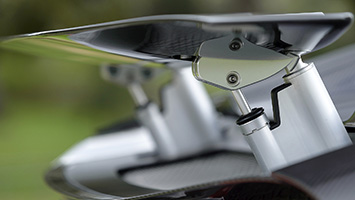 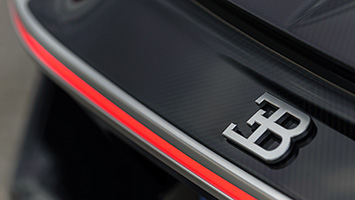 And then there's that speed run, the shockingly brief but immensely intense burst of acceleration that sends my steed hurtling towards the horizon on a seemingly unstoppable tear. Thanks to the automatically lowered ride height and aggressive downforce, the car stays firmly planted on the road. I (predictably) run out of room all too soon and have to punch the brakes, returning to sane(r) speeds. But when I later learn of the 377 km/h speed, the figure becomes seared into my brain. The Chiron was still pulling hard at that speed, suggesting it has far greater reserves than the published top speed of 420 km/h (or 261 mph) – and in fact, it does. As Bugatti President Wolfgang Dürheimer emphasizes, the car is electronically limited to 420 km/h to save room for a faster variant that will leave this landmark in the dust, which will turn yet another groundbreaker into a late, great legend.

Look out for the future; it comes quicker than you think. 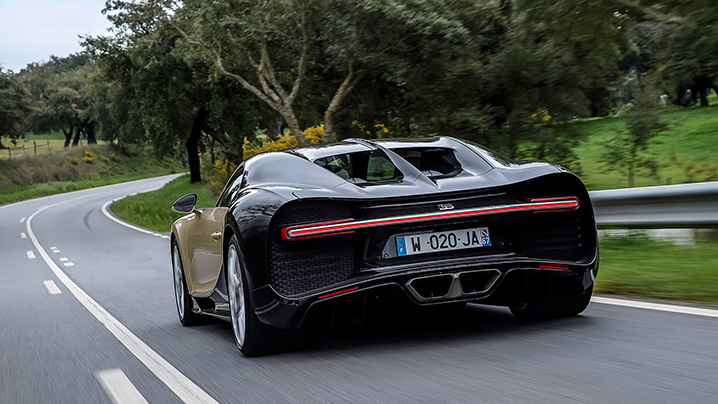