GMC isn't a hip, young startup, but its engineers are out to prove it's possible to teach an old dog new tricks. The next-generation Yukon will offer adventurers seeking a quick turn-around a "Hurricane Turn" feature that functions a lot like Rivian's Tank Turn technology. The two systems use different hardware to perform a similar action.

We didn't hear anything about the Hurricane Turn feature during the Yukon's unveiling because GMC planned to keep it under wraps until later, but an eagle-eyed report at Motor Trend uncovered it and quizzed the firm. It's real, and it's engaged when the driver switches the stability control system off, energetically turns the steering wheel in either direction, and mashes the accelerator pedal to the floor. The Yukon needs to be on a loose surface, too.

If you're turning right, the on-board computer applies braking power to the passenger-side wheels to prevent them from spinning, while the engine continues to turn the driver-side wheels to rotate the Yukon on its own axis. The exact opposite happens if you're turning left. It's clever and relatively simple; there's no extra hardware required to enable the feature, though it shows the next Yukon is far more advanced than its predecessor.

It goes without saying that only four-wheel drive models will receive the Hurricane Turn feature. There's no word yet on whether it will be compatible with all three engine options, or if it will be limited to a certain trim level. GMC will publish additional details about the system, and hopefully a video of it in action, in the coming months.

Rivian, on the other hand, leveraged its four-motor electric powertrain to teach the R1T (and presumably the R1S) how to pull a 180. The right wheels turn in the opposite directions as the left wheels – hence the name Tank Turn – to spin the truck around like a CD in a Walkman. Its system doesn't use the brakes.

The 2021 Yukon is due in showrooms in the summer of 2020, and Amazon-funded Rivian won't start making the R1S until the end of 2020 at the earliest, so GMC will beat its younger rival to the punch. What remains to be seen is how often motorists use either function. We're betting not very once the initial novelty wears off. 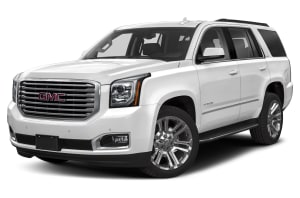