Kia Telluride could head into luxury territory with flagship trim

It would be one of the company's most expensive models Kia will expand the Telluride lineup with a range-topping trim level that will catapult the SUV into luxury-car territory, according to a recent report. The variant will arrive as one of the firm's most expensive models.

Without citing sources, website AutoSpies wrote the yet-unnamed flagship Telluride will stand out from less expensive models with a two-tone paint job split below the roof line and additional interior colors, among other posh tweaks. And, somewhat surprisingly, Kia will allegedly offer buyers an off-road package that will bundle skid plates, beefier tires, and a bull bar. The off-roader described by the publication sounds a lot like the concepts Kia brought to SEMA 2018, and it could surf the ruggedization wave sweeping across the industry.

There's no word yet on whether the deluxe treatment will continue in the engine bay. As of writing, the Telluride is only offered with a 3.8-liter V6 rated at 291 horsepower and 262 pound-feet of torque. An eight-speed automatic transmission and front-wheel drive come standard, and all-wheel drive is offered at an extra cost.

Kia hasn't commented on the rumor, and it hasn't announced plans to expand the Telluride's trim hierarchy. If it's accurate, the flagship version could make its debut in 2020 and arrive in showrooms during the 2021 model year. Its upmarket ambitious would push its base price toward the $50,000 mark, about $20,000 more than the entry-level model and a $10,000 premium compared to the SX currently positioned at the top of the line.

While the idea of paying $50,000 for a Kia will certainly startle more than a few buyers, it's not as far-fetched as it sounds. The Stinger is already there, the most expensive GT2 trim is pegged right at that price point, so the South Korean firm has already proved it has the credibility to compete in this space. The Telluride lends itself well to an extra dose of opulence, especially considering demand for luxury SUVs continues to grow in America. 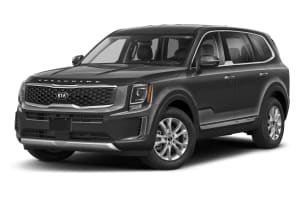