On the same day BMW opened order books for the X1 xDrive25e plug-in hybrid, the Munich automaker has announced that an X2 xDrive25e will join the party soon; deliveries for the X1 PHEV begin in March, Auto Express says the X2 PHEV arrives this summer. Both crossovers utilize the same fourth-generation powertrain already installed in the Mini Cooper S E Countryman PHEV, a 1.5-liter three-cylinder with 125 horsepower and 162 pound-feet of torque driving the front wheels, an electric motor with 95 hp and 122 lb-ft turning the rear axle. System output comes to 217 hp and 284 lb-ft. Depending on the mode chosen, either Auto eDrive, Max eDrive, or Save Battery, the crossovers operate in front-, rear-, or all-wheel drive. Comfort, Sport, and Eco Pro modes allow further fine tuning of the drive experience.

A 9.7-kWh lithium-ion battery stored under the rear seat maintains the same cargo capacity as the non-hybrid versions. Plugged into a European 220-volt household socket, an empty battery regains 80% of its charge in 3.8 hours, and is fully charged in roughly five hours. Plugged into the 7.4-kW BMW i Wallbox, an 80% top-up comes in 2.4 hours, a full charge in under 3.2 hours. All-electric driving delivers a 31-mile range on the WLTP cycle, at a top all-electric speed of 84 miles per hour. Put the whole powertrain to work, and 0-62 mph takes 6.9 seconds in the X1 PHEV, 6.8 seconds in the X2 PHEV. The X1 maxxes out at 119 mph, the X2 can reach 121 mph.

The X1 plug-in will be available in xLine, Sport Line, and M Sport guises; the X2 puts up more choice with Advantage, Advantage Plus, M Sport, and M Sport X trims. Both come standard with features like dual-zone climate control, BMW ConnectedDrive with Concierge Service, and 17-inch wheels, plus a choice of 13 interior upholsteries.

The X1 and X2 PHEVs are the next steps in BMW's push to get 1 million electrified models on the road by 2021, and will compete against luxury rivals like the Volvo XC40 T5 Twin Engine. The automaker still hasn't said anything about the X1 xDrive25e coming to the U.S., probably choosing to focus the new regulatory issues in Europe first. Since we get the same powertrain with a Mini body, however, it's reasonable to think BMW could announce the X1 PHEV for our market in time. 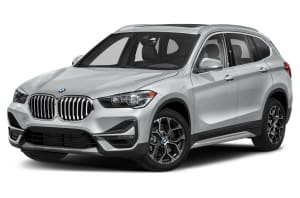