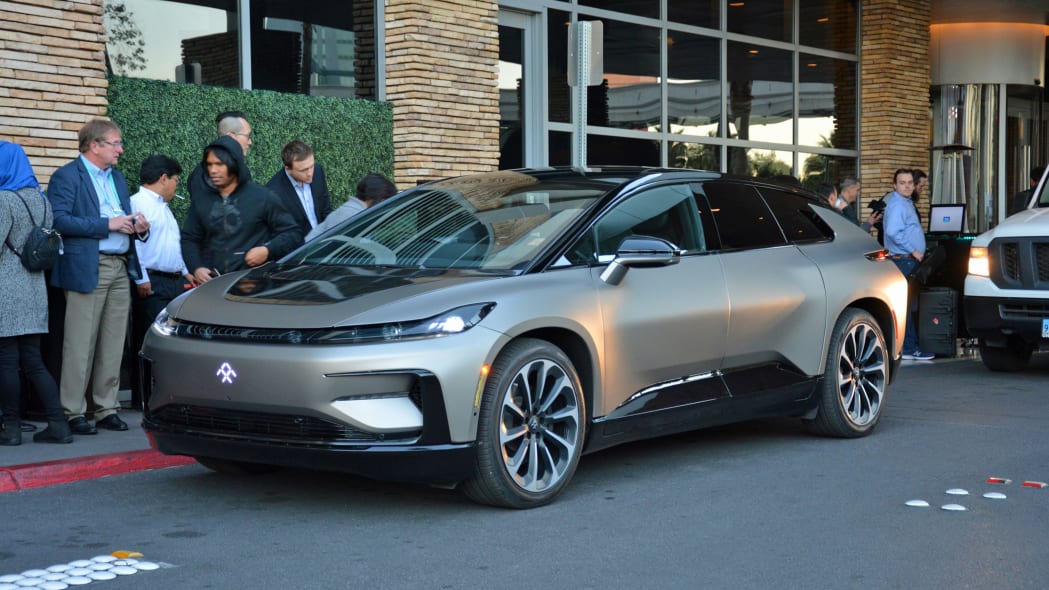 LAS VEGAS — Faraday Future CEO Carsten Breitfeld skipped the business class boarding line and instead reached CES 2020 in Las Vegas via I-15's northbound lanes. It wasn't a cost-cutting measure; he chose to drive to put a pair of close-to-production FF91 prototypes through their paces. The on-again, off-again electric luxury sedan is still on its way to production, and Autoblog got the opportunity to take it for a spin on the sidelines of the tech show.

While a lot has happened since the FF91 made its global debut at CES 2017, the car's basic specifications haven't significantly changed. It's still powered by a 130-kilowatt-hour lithium-ion battery pack that channels electricity to three electric motors, each rated at 350 horsepower. Two are mounted over the rear axle (one for each wheel), and one spins the front wheels. The powertrain's total output checks in at 1,050 horsepower, and Breitfeld told me he had 110 miles of range left after making the roughly 250-mile trip from Los Angeles to Las Vegas. A range of 360-plus miles would put the FF91 near the top of the pack in the segment's range race.

From the driver's seat, the FF91 feels like no other car I've ever been in. The seats are wide and plush, almost like a Lincoln Continental's, but the steering wheel is oval and its rim is surprisingly thick. The instrument cluster is further away than I'm used to, and it stands out with a relatively minimalist design. There's no dashboard in the traditional sense of the term; it's discreet and concave, rather than bulbous and in your face. There is a head-up display, a 15.4-inch vertical touchscreen for the Android-based infotainment system, an entertainment screen right ahead of the front passenger, screens in all of the door panels, a digital rear-view mirror, and a massive screen that flips down from the roof in order to keep the passengers entertained. Shuai Yang, one of Faraday's interface engineers, beamed with pride as he pointed out the FF91's total screen space exceeds 100 inches.

And yet, Faraday retained a column-mounted stalk as a gear selector. Once in drive, the car creeps forward in complete silence, and eagerly bounces forward the second I give the pedal more than feather-light inputs. This is the 1,050-horsepower version. It's also a prototype, so chassis tuning is an ongoing process, and the decidedly light steering feel I experienced isn't necessarily what Faraday will bring to the market. Darting down side streets in Las Vegas reveals the powertrain has potential, it builds speed quickly and in a linear manner; I'd expect nothing less from an electric car with Bugatti Veyron-rivaling power. When I hit traffic, releasing the accelerator brings the FF91 to a stop by summoning a noticeable amount of brake energy recuperation. It's almost BMW i3-like, it's possible to one-pedal drive it around town, but motorists have the option of turning the system off.

The engineer riding shotgun tells me the FF91 feels "buttoned-down" when going around a turn, a claim I couldn't easily put to the test in downtown Las Vegas, but whether it takes a turn like the Monorail might not matter to the average buyer. Faraday Future is targeting chauffeur-driven buyers on the ever-important Chinese market with a pair of business class-like seats, and it's planning on integrating semi-autonomous technology into its range as quickly as possible. The FF91 won't be fully autonomous, though, at least not in the foreseeable future.

"When we go to the market, we will have level three technology," Breitfeld announced. "We'll move on to level four, but, you know, in this whole autonomous driving discussion, the expectations are sometimes a bit too high. Some people are saying we'll have level four everywhere five years from now, and I just don't think it's going to happen," he added. He cited cost concerns, and anyone hoping to roll out level four or level five technology globally needs to solve a regulatory Rubik's cube that might represent more trouble than it's worth.

Faraday Future will begin building the FF91 in Hanford, California, by the end of 2020 if it receives its final round of funding. The plant has an annual capacity of 30,000 units, though the ramp-up will take time, and Breitfeld underlined the need to build a second factory in China to make cars for the local market. The first models sold to Chinese buyers will be imported from California, and Hanford will remain a key part of its global supply chain.

There's a French saying that points out "with enough ifs you can stuff Paris in a wine bottle." It applies here. Building cars is hard; even century-old automakers don't always get it right. Faraday Future has often missed the mark completely, and its reputation has suffered accordingly, but Breitfeld is confident the worst has passed.

His eyes lit up when I asked where he sees the company in 2025. "We will have the FF91 out, and we will be building it in the United States as well as in China. We will sell more than 30,000 cars annually, and our second product, the FF81, will be on the market. It will be a smaller and much more affordable version of it. We will be profitable by selling cars, and we will have started to implement our second business platform, which is basically using the car as a platform and making money out of selling digital content in our car." This approach to generating revenue falls in line with the growing industry trend of monetizing software, app store-style.

First things first, though. Breitfeld and his team have a list of obstacles to clear, including erasing several years' worth of bad publicity from the industry's collective memory, and figuring out how to stand on stable financial footing. "One of the most dangerous things you can do as a startup is trying to do too much," the CEO conceded.

Faraday Future is closer to its goal than ever. And, for the first time in its short existence, it's in good hands.