It has 11 display screens 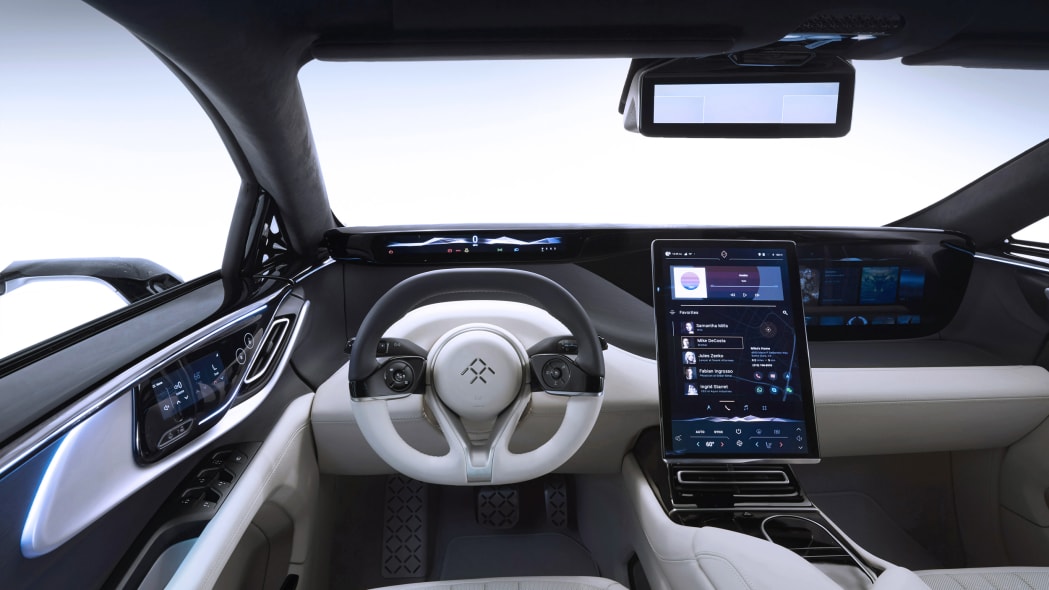 Faraday Future showed near-superhuman resilience by confirming it's still working on turning the FF91 concept unveiled in 2017 into a production car. The company released images illustrating what the final version of the sedan will look like inside, and some of the technology features it will offer.

The photos suggest sitting behind the FF91's steering wheel will feel a lot like walking through the television aisle at Best Buy. Screens are everywhere. There is a thin, horizontal screen positioned right behind the steering wheel that replaces the instrument cluster, a huge head-up display, and an additional screen where you'd normally find the rear-view mirror. The giant, portrait-oriented touchscreen propped up on the dashboard runs the infotainment system, which looks like it was designed in-house, while the front passenger can use yet another screen to access different menus. This setup lets the driver keep an eye on navigation directions while the passenger watches a movie.

The fifth, sixth, seventh, and eighth screens are integrated into the door panels. They're used to adjust the climate control and the seating position, among other parameters. Speaking of, the cabin is big enough that the individual, 14-way adjustable rear seats recline into a bed, and designers had room to integrate a storage compartment for champagne glasses into the rear center console.

Faraday has you covered if you need to get a little bit of work done before you start drinking. The company pledged to offer office-like connectivity on the go, including the ability to make conference calls at highway speeds, thanks in part to multiple 4G LTE modems scattered throughout the car.

Alternatively, the rear passengers can relax and watch a movie on a 27-inch screen that's housed in the headliner. All told, the FF91 can be configured with no less than 11 screens if we count the head-up display as one. Faraday Future also integrated multiple cameras into the cabin that rely on facial recognition technology to identify the passengers via what the company calls an FFID. Once it knows who is on board, the car adjusts the music, the temperatures, the massage function, and the ambient lighting settings accordingly. It even knows which scent you like to smell. And, alternatively, if it can't see your face, it knows who you are by memorizing your voice and your weight. Let's hope the standard voice recognition technology never learns how to gossip.

Powertrain specifications haven't changed significantly. Faraday Future still plans to release the car with a 1,050-horsepower electric powertrain that uses a 130-kilowatt-hour lithium-ion battery pack to deliver 378 miles of range. It promises a 0-to-60-mph time of under 3 seconds.

The FF91 can do a lot of things, by the sound of it, but it can't build itself. That's up to Faraday Future. The company has experienced a nearly endless series of setbacks that are unusual even for a start-up, but it's still planning to begin building the FF91 by the end of 2020 in a million-square-foot factory it's leasing in Hanford, California. Pricing will start in the vicinity of $175,000.