Remember that teaser image from last week indicating the Lincoln Continental would get suicide doors? Well, it's happening, and we got to check out a prototype late last week. As you can see from the photos, the vehicle is essentially a stretched Continental with rear doors that latch forward. Lincoln doesn't call it the suicide door edition, of course. No, the proper name is 80th Anniversary Coach Door Edition. Semantics aside, the car is here to pay homage to the suicide doors of the 1960s Continental and celebrate 80 years since the original Continental was introduced.

That's the why; now here is the how. To build this special edition, a Continental begins life as a normal Black Label model, and leaves the factory with normal doors intact. From there, Lincoln ships the car to Cabot Coach Builders in Massachusetts for the stretch and other modifications we'll get into later. Before you start cursing Lincoln for not really screwing together a suicide door Continental, know this: Lincoln engineered all the components, metalwork and everything else that goes with the build. It then gives the car and components to Cabot for the fabrication work. So yes, somebody else is doing the conversion, but you're still getting a Lincoln-engineered vehicle. Make of that what you will. Cabot has done work for Ford before with the MKT and Transit Van, but Lincoln says it's much more involved in this build than it ever was before.

To begin, the Continental gets a six-inch stretch. It was a relatively long car before, but boy does this thing look like it's lounging now. That's exactly what you'll be doing once inside those suicide doors. Lincoln claims best-in-class legroom, and yes, to our eye that is surely accurate. Someone well over 6 feet tall could easily stretch all the way out and still have room to spare back there. The only problem we noticed? Headroom. A sloping roofline combined with seats that are well pushed back doesn't leave a whole lot of space up there. It looks like Lincoln noticed this and carved out little spaces in the headliner, but it might not be enough for those who are closer to the sky than most. 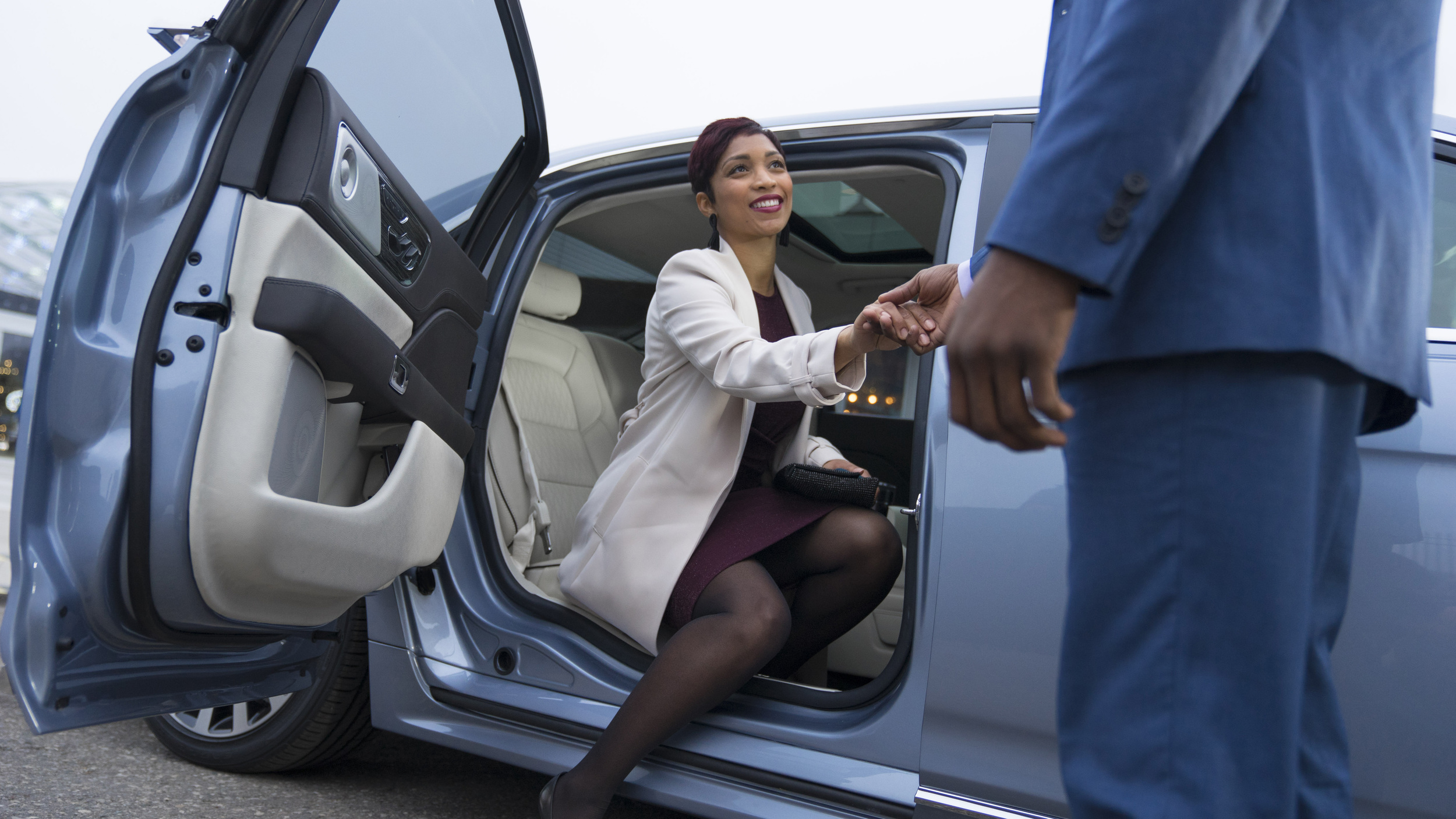 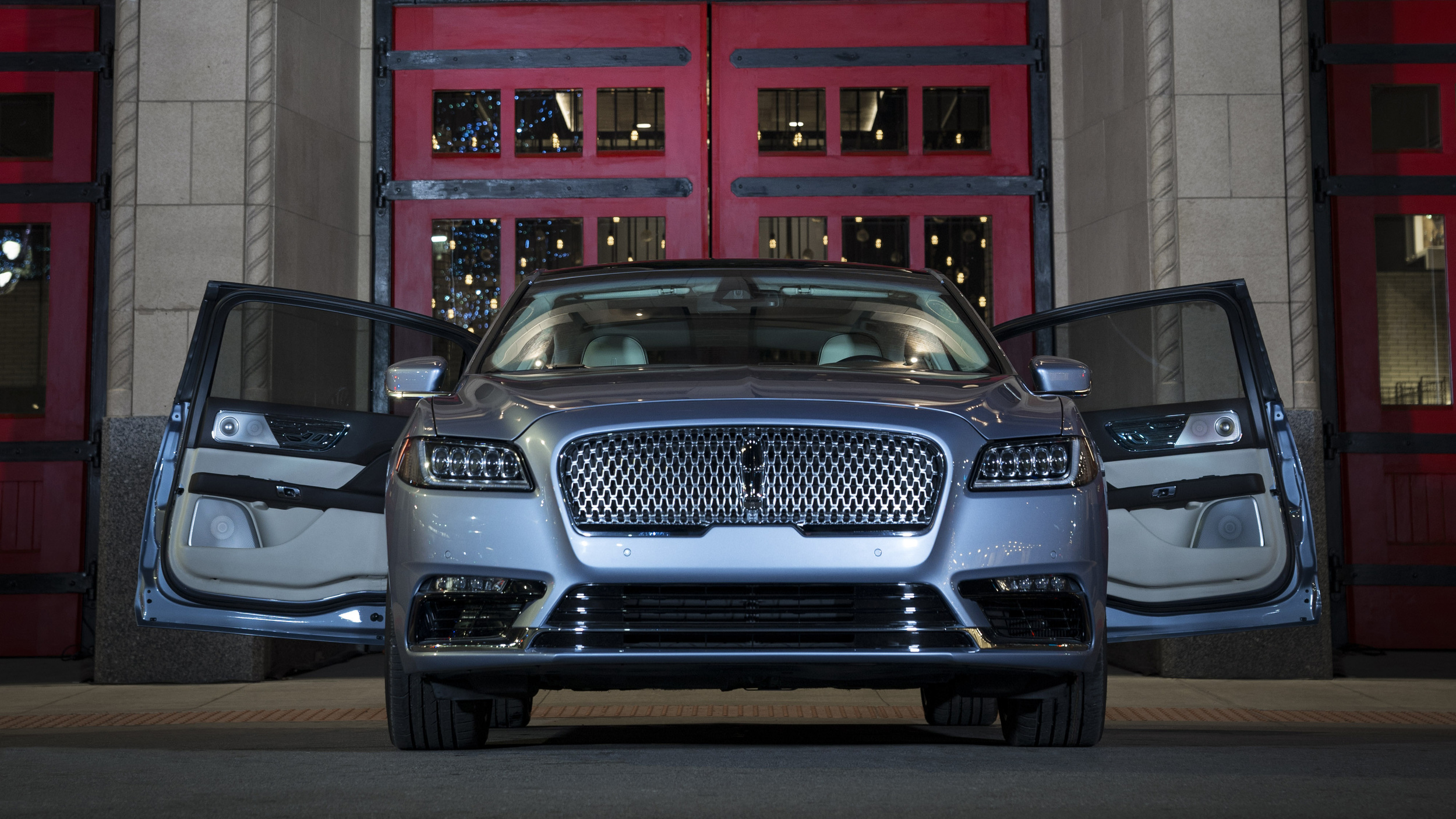 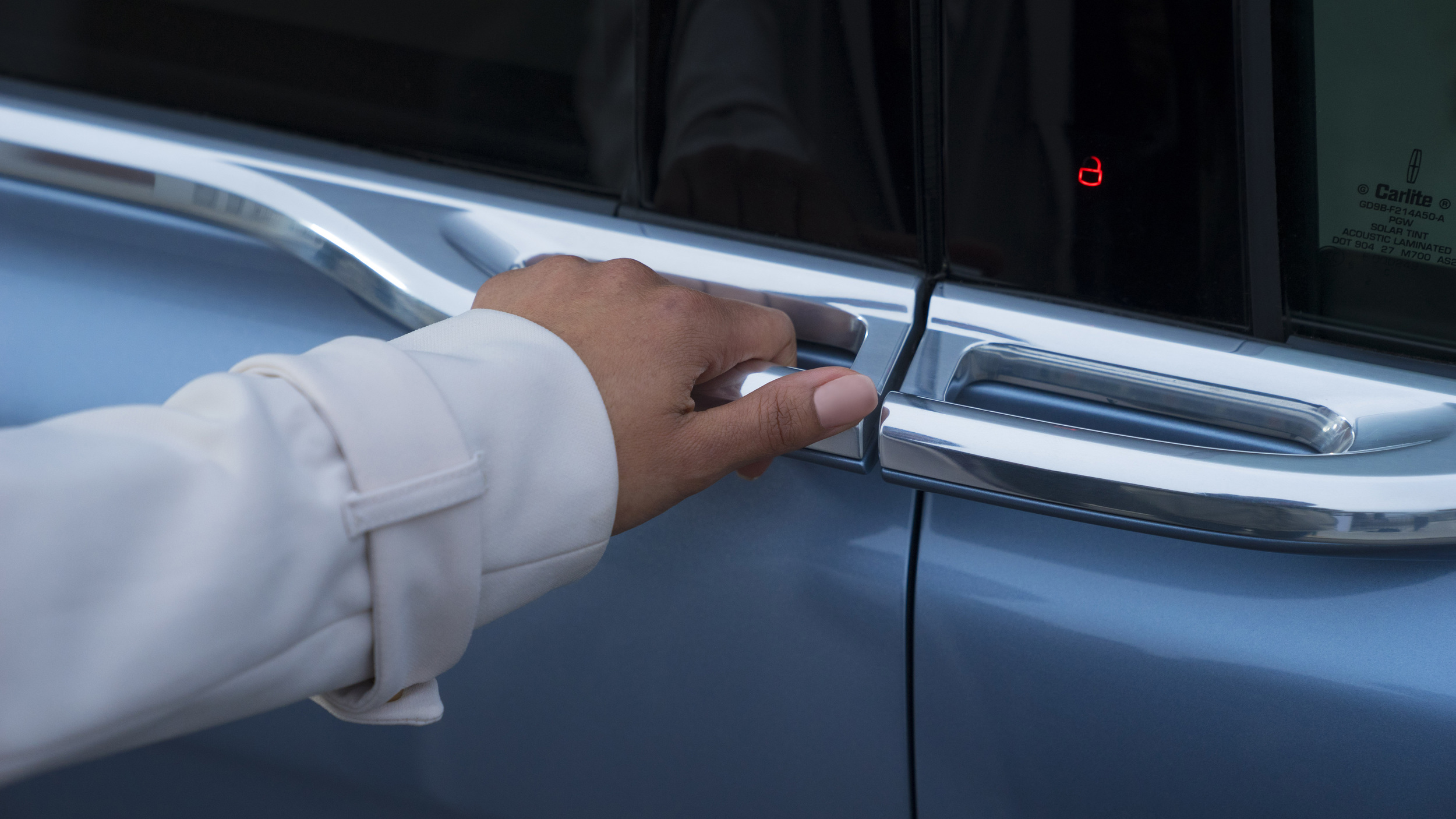 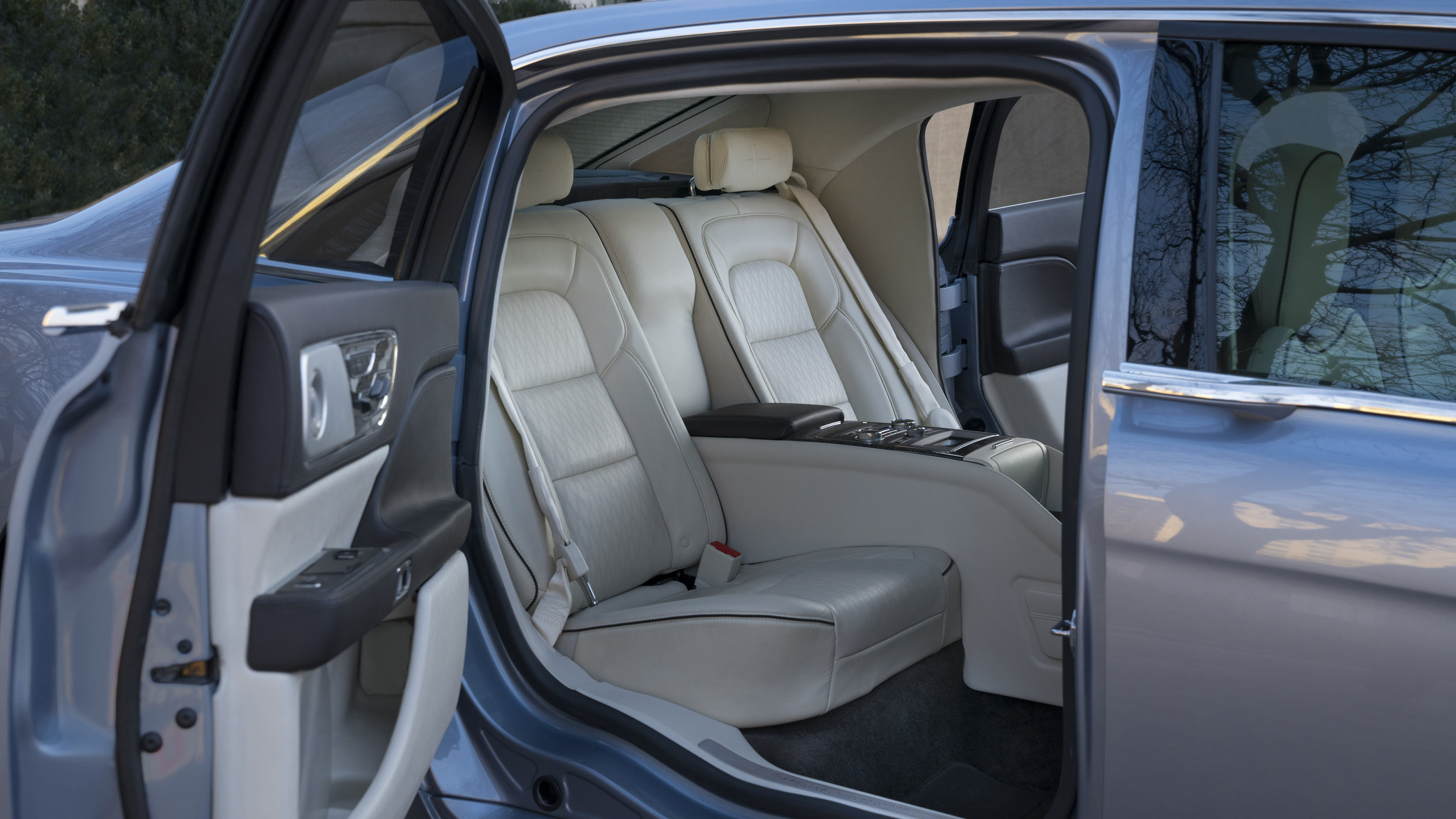 A flow-through center console occupies space where the middle seat would typically be. This has all sorts of controls for things like audio and climate control. Lincoln said the one we sat in wasn't entirely finished with all the features and electronics that will be included. However, it was integrated into the Continental's interior nicely and looked like it belonged there. There's a stowable tray table and tablet holder for those looking to get work done or watch a movie on the road.

We should really get to the doors, though. They're larger than before, but they still open with the same type of button on the inside of the handle as before. Apparently the production doors will be lighter and open to a full 90-degree angle. As it was, the doors were heavy and difficult to close for an occupant. One has to lean a great deal outside the car to grab the interior handle once seated. Basically, get yourself a chauffeur and don't worry about it.

And in case you were wondering, you absolutely feel cool as hell when opening the doors to crawl inside. It's not the pillarless look of yesteryear, but hey, we have crash standards nowadays. Speaking of crashing, Lincoln is running this vehicle through its whole crash-test program like any other car it makes. We've been assured it's every bit as safe as the Continental with standard doors. 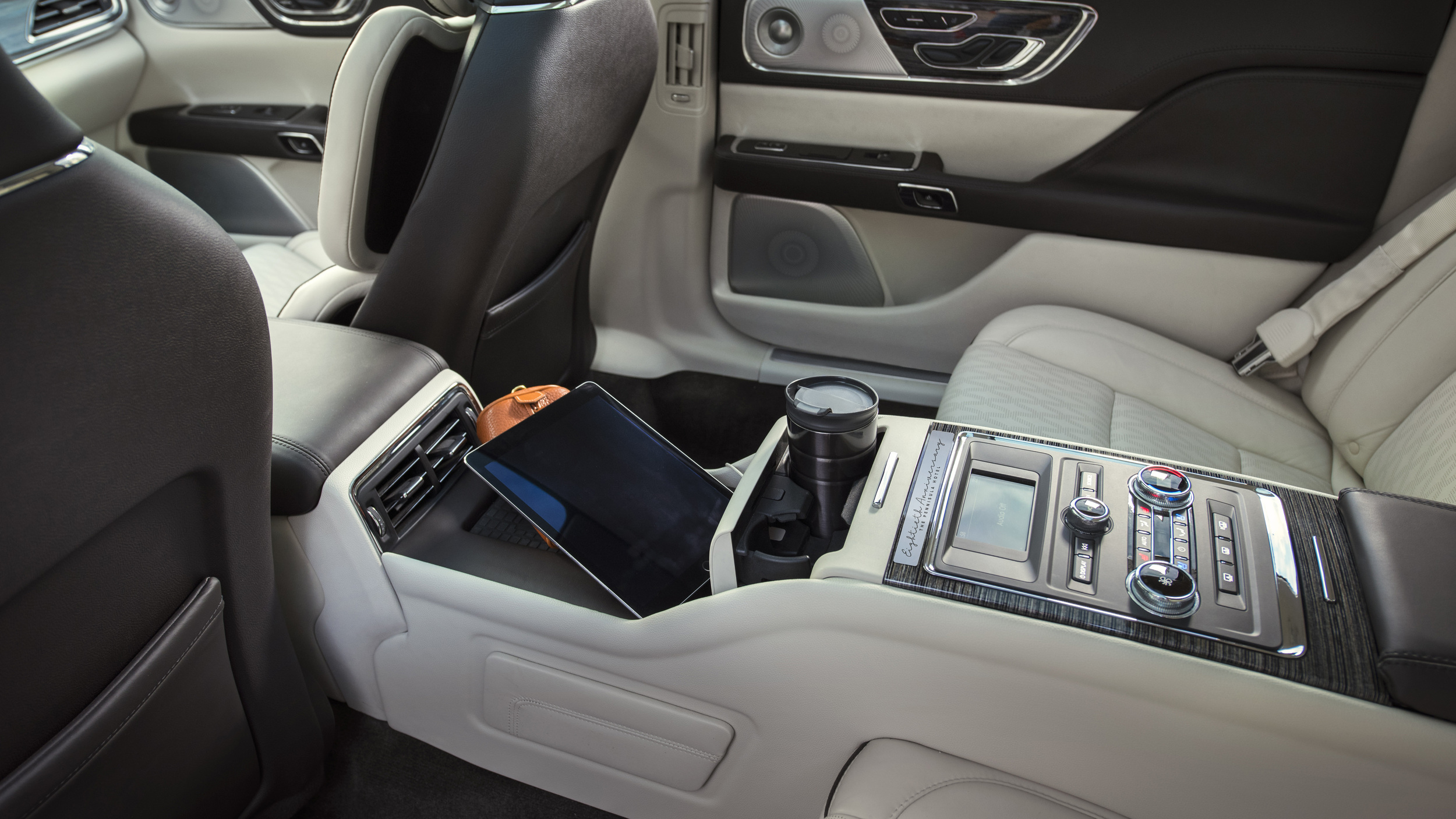 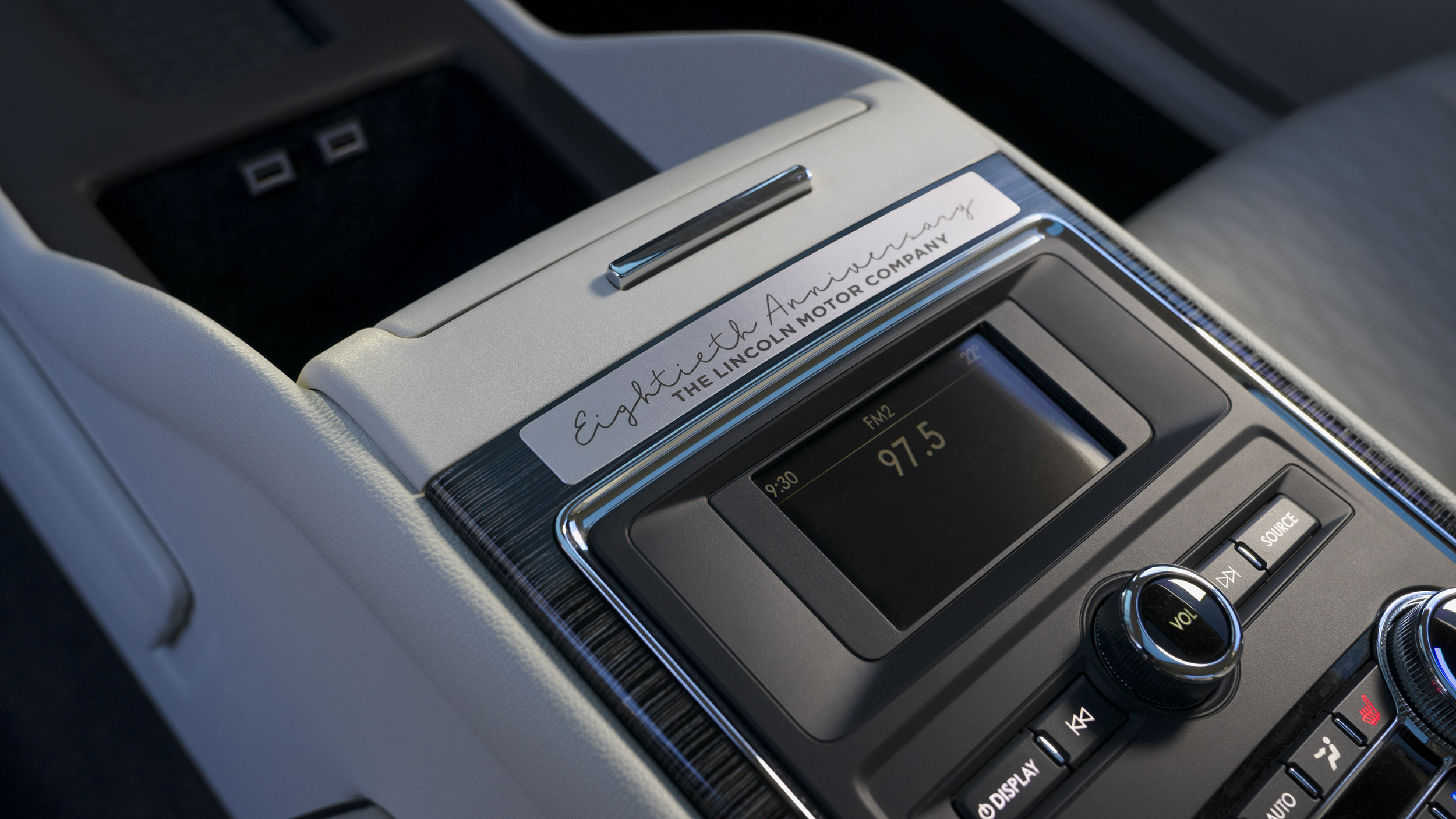 The work done by Cabot makes up the only actual modifications to the vehicle. Lincoln says it's only about 100-150 pounds heavier than a normal Continental, which keeps it in the same weight class. This allows the vehicle to use all the same underpinnings and braking systems that the car came with from the factory. Under the hood is the optional 3.0-liter twin-turbo V6, which makes 400 horsepower and 400 pound-feet of torque.

All of that is exciting and wonderful, but let's get to the part you may be less enthused about. Lincoln will be producing exactly 80 Coach Door Continentals for the 2019 model year. It left the door open for extremely limited production of the car in the 2020 model year, too, but that runs us up against a whole suite of looming issues. We've seen reports of the Continental being phased out after the 2020 model year. Regardless, the car is undeniably cool in-person. It's easy to call it a gimmick, but Lincoln has true suicide door heritage in the Continental going back to 1961.

Pricing for this special-edition Lincoln will be somewhere just north of $100,000, we're told — the Black Label it's based on is a bit over $70,000 depending on how you equip it. And all of these will come with every option in the book. The 80th Anniversary Coach Door Edition is available to order at your local Lincoln Black Label dealer today, and the cars will reportedly ship next summer.