BMW has issued a stop-sale on certain M models in its lineup due to a transmission wiring harness problem. These cars include the M5, M8 (Coupe, Convertible and Gran Coupe), X5 M and X6 M. The issue was originally seen posted on Bimmerpost forums and initially reported by Motor1.

All the models being recalled are M cars fitted with their respective versions of BMW’s 4.4-liter twin-turbo V8 and eight-speed automatic transmission. According to documents posted on Bimmerpost (below), the transmission wiring harness could become damaged due to its location and routing. This could lead to a short circuit and cause a transmission problem. The document continues by saying that it could cause the vehicle to lose propulsion and shift into neutral while driving. 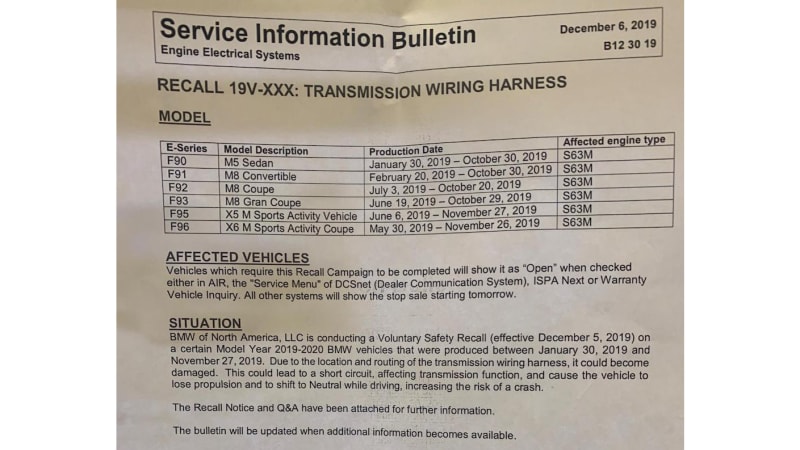 The vehicles affected were all built in 2019 between January 30 and November 27. That encompasses nearly every M car built this year, so you’ll be hard pressed to find one available for sale at BMW dealers today. In all likelihood, it will be completely impossible to drive one of these home right now unless you get extremely lucky.

We’ve reached out to BMW to see if it could provide any more details about the stop-sale. As of now, there’s no official recall posting on the National Highway Traffic Safety Administration’s website, but that will likely change soon. For those who own one of these M cars already built in that timeframe, expect a recall notice in the mail soon. BMW will replace the transmission wiring harness on all the cars being recalled.

If you were looking to buy one of these super-fast M cars, you’re going to have to wait until BMW is able to fix all the vehicles on dealer lots. We’ll update this story with any dates or information BMW is able to provide us when we hear back.

Update: BMW has informed us that the affected vehicles in dealer inventory will be fixed in early 2020. Additionally, those who already own one of these cars will receive a letter about the situation in February next year. It will inform folks to schedule an appointment to have their car fixed. BMW approximates the repair will take one hour.