2021 Aston Martin DBX looks the part, likely drives it, too

It's everything you'd want in an Aston Martin for the family 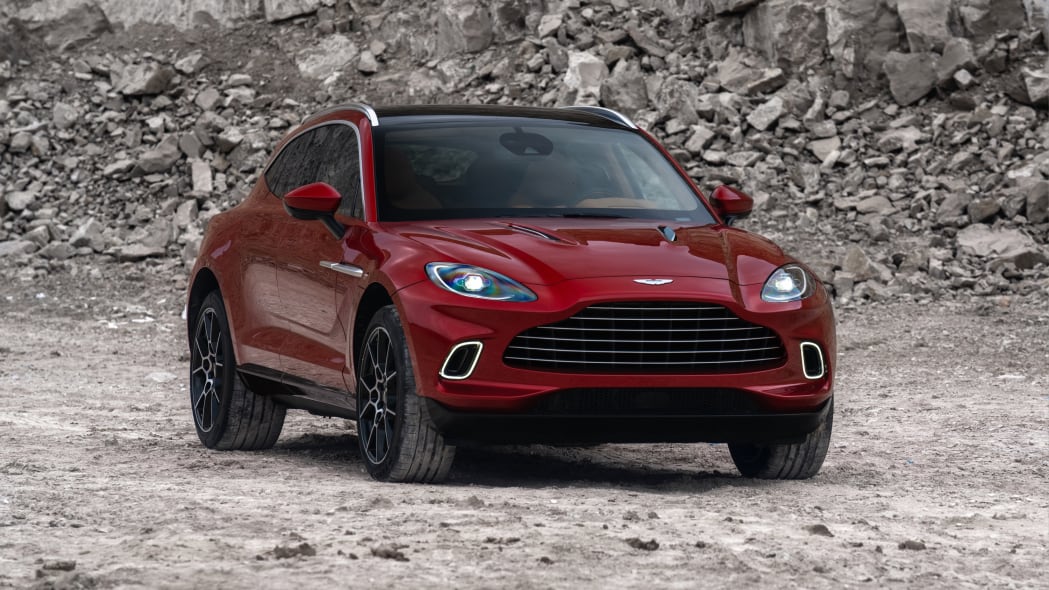 After 106 years in business and after five years working on development, Aston Martin presents its first-ever SUV, the DBX. Having seen spy shots and teasers of the vehicle's progress over the past year, it's everything we'd expect, and on first glance it holds up as an Aston Martin. The company's already told us there's an AMG-sourced, 4.0-liter twin-turbo V8 making 542 horsepower and 516 pound-feet of torque, making this the most powerful version of that motor in the English automaker's lineup. Shifting through a nine-speed torque converter automatic, zero to 60 miles per hour takes 4.3 seconds, top speed is 181 mph. We've heard the exhaust note. And we've seen the leather-filled interior and the $189,000 USD price, which comes to $192,086 after destination. What we now know are 24 pages worth of press release detail that make this a true Aston Martin. We'll share just a few of those details here.

The exterior has all the rake and swoop one would expect. Astride the trademark grille shape are LED headlights, below those, DRLs ring two aerodynamic ducts that reduce lift and drag and cool the brakes. Frameless doors hide their window seals for a super clean look, and the B-pillars are fronted with glass to help the illusion of an unbroken expanse. The rakish rear glass slides down to a pronounced, fixed spoiler lip reminiscent of the Vantage. Two wheel sizes are offered, both 22 inches — the V-spoke design shown, and an optional Ribbon design that gives the "appearance of interwoven strands of contrasting color metal" that's inspired by "the interlocking antlers of stags in battle."

The DBX comes on a new bonded aluminum platform specifically developed to support an SUV. Years of experience with the construction method helped engineers keep weight of the five-seater down to 4,940 pounds for the vehicle overall. The weight is dynamically managed by an adaptive air suspension bolstered by a 48-volt anti-roll system. The standard 7.8-inch ground clearance can be raised by 1.8 inches to clear a 19.7-inch wading depth, or lowered by a hair under two inches when easy access is needed to the 22.3 cubic-feet of trunk space behind the second row. The new AWD system uses an electronically controlled center diff and a rear differential to apportion torque, going from a 47/53 torque split to sending almost 100 percent of twist to the rear. The rear diff and brake-based torque vectoring help out when it's time to hustle through esses, hill descent control helps get down hills, and 16-inch, six-piston brakes up front do the stopping.

As we saw in the teaser image, the interior's a glut of Bridge of Weir leather that takes 200 hours to stitch and inlay. Up top, a panoramic glass roof keeps the cabin airy. For shade, an Alcantara blind rolls up to match the Alcantara headliner. The front seats — with separate armrests — are inspired by the thrones in the DB11 and include cutouts in their backs to make more knee room for second-row occupants. Instead of full leather on the seating surfaces, buyers can choose a contrasting fabric material that's 80 percent Australian lambswool mixed with synthetic fibers. We're told the result is a "luxurious felt-like fabric." The center console forms a bridge between the front seats, the space below ideal for storing large, handheld items. Unsurprisingly, the standard options list includes all manner of broguing, quilting, perforartions, colot splits, and veneers — even a new one derived from flax — before one needs to tap the customizers at Q by Aston Martin.

Easy customizing comes in the form of 11 accessory packs available at launch, such as the aforementioned Pet Pack; plus a Snow Pack for skiing that adds a roof rack, a set of chains, and boot warmers; a Touring Pack with luggage; an Essentials Pack for hardcore organizers; and an Event Pack with a picnic hamper,

Driver information is displayed on a 12.3-inch TFT screen, infotainment pops up on the 10.25-inch TFT screen set into the dash — no iPad-looking fixtures here. Apple CarPlay is standard, Android users get left out. Six driving modes count Sport and Sport+ for the road, plus Terrain and Terrain+ for the dirt. Pirelli P Zeros come stock, but drivers who plan to use the DBX capabilities can opt for Pirelli Scorpion Zeros or Scorpion Winter rubber. Convenience and safety tech built in will include a 360-degree camera system, adaptive cruise control, lane keep assist, land departure warning, and automatic emergency braking.

Aston Martin will begin building the DBX at the carmaker's new facility in St Athan, Wales, next year, with deliveries to begin in the latter half of 2020. The first 500 buyers have their DBXs bestowed with the "1913 Package," which appends special badging outside and in, comes with a build book signed by the carmaker CEO and chief designer, and an invitation to a gathering at a nearby Waldorf Astoria.