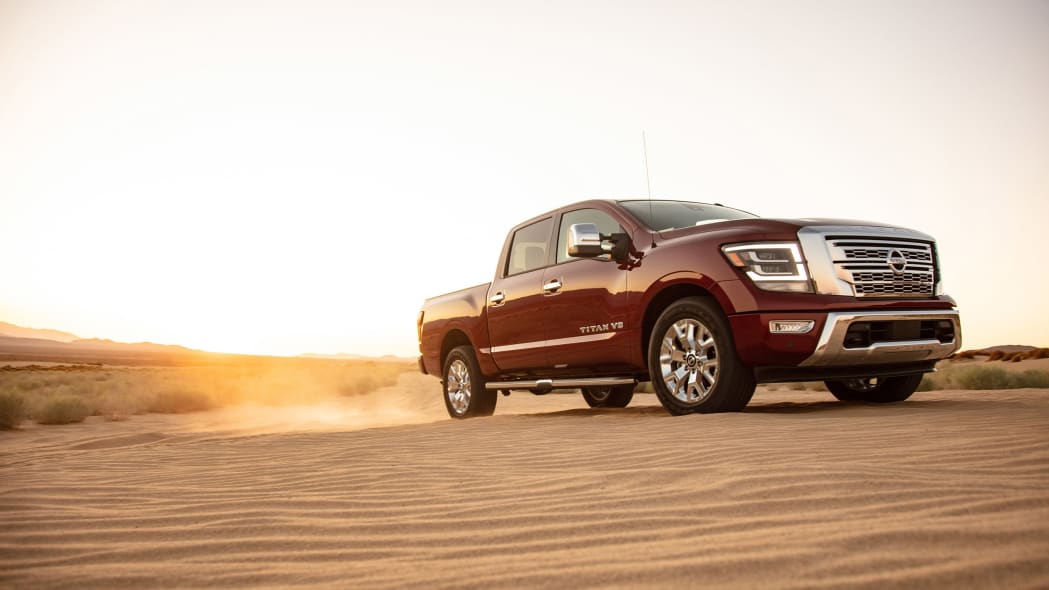 With sales of about 25,000 so far this year, the second-generation Nissan Titan is the worst-selling full-size pickup in America. And it’s in last place by a large margin. How large? Well, lets put it this way, Nissan sells fewer Titans than Ford F-150s fall off the proverbial truck. Even the Toyota Tundra, the country’s second-worst-selling full-size pickup, outsells it by a factor of about 5 to 1. But Nissan isn’t giving up on America’s big-truck buyers. Quite the opposite, actually. Call it resilience, tenacity or just plain insanity, but the automaker has just spent $230 million giving the 2020 Nissan Titan a substantial refresh.

Nissan will probably like you to believe that the largest improvement to the 2020 Titan is its new nine-speed automatic transmission or its revamped interior that now features an available 9-inch touchscreen. And both are significant upgrades. But it’s the changes to the Titan’s exterior styling that the market will appreciate the most. It’s no longer the ugliest full-size pickup truck you can buy, an honor now falling to the Chevy Silverado.

There’s an all-new grille that features a sizable integration of the truck’s new Titan T logo. Look closely. There are also new headlights, which Nissan says double the low-beam output, new taillights and, most important, new front fenders with less upward swoosh and without the awkward badging, both of which still plague the heavy-duty-adjacent XD (its ugliness has largely been maintained). The hood is unchanged, and it remains the truck's only aluminum panel.

Body style offerings have been shaved down to just two: King Cab, which still features clumsy clamshell back doors, and Crew Cab. Trims are S, SV, SL and Platinum Reserve, all of which are available with two- or four-wheel drive, and the off-road-tuned Pro-4X (pictured above), which is 4x4 only. It also gets 31-inch-tall General Grabber tires for about an inch of additional ground clearance over some 4x2 models, Bilstein shocks, and skid plates to protect the underside of the radiator and transfer case. It’s also the only trim with a locking rear differential, which is annoyingly only able to be engaged in 4WD Low.

According to Keith St. Clair, Nissan’s director of product planning, “If you’re into chrome, the Titan SL is your truck.” You'd assume so considering its shiny grille, wheels and other trim (it's pictured at the top of this page). S and SV models are monochromatic, while the Platinum Reserve truck pictured below, which also get the Bilstein shocks, get dark chrome trim and two-tone paint. All Titans are assembled in Canton, Miss.

The XD’s available Cummins diesel is dead. Now, the same 5.6-liter V8, which Nissan has been using since the Big Bang, solely powers both Titans, and it remains essentially the same as it was last year, but its specs have been tweaked. For 2020, Nissan has recalibrated the engine to optimize spark at fuel delivery on 91 octane premium fuel. This has increased its peak output numbers to 400 horsepower at 5,800 rpm and 413 pound-feet of torque at 4,000 rpm. However, if you fill the tank with 87 octane gasoline, the power numbers revert back to last year's ratings of 390 hp and 394 lb-ft of torque. And no, running your 2019-or-older Titan on 91 octane does not get you the new power levels.

Titans have never been slow, but in Nissan’s search for more acceleration and improved towing ability up grades, it has replaced the truck’s seven-speed automatic with a snappy nine-speed and it has radically lowered its rear axle gear ratio from 2.93 to 3.69:1. The result is more jump off the line and harder acceleration through the new transmission's tightly spaced first few gears. Unfortunately, Nissan would not get specific about 0-to-60-mph times. However, it does say that the truck is about a full second quicker from 50-70 mph.

The direct-injected engine retains its throaty V8 rumble, and it pulls strong to 6,000 rpm, where all wide-open-throttle upshifts are performed despite a 6,300 rpm redline on the Titan’s tachometer. The new transmission is well-geared, dropping the engine speed down to just 4,500 rpm on most full-throttle upshifts. Gear changes are smooth and quick, and the nine-speed doesn’t make you beg for a downshift on the highway when you need a bit more power for passing. It also chooses the right ratio around town, however, if you nail the throttle to the carpet quickly at about 40 mph, it does take a beat to decide how many gears to downshift. You can manually shift it with a toggle on its column-mounted shifter, but it upshifts for you at 6,000 rpm even in manual mode. There’s also a Tow/Haul mode, which recalibrates the transmission for towing.

The hardware and tuning of the suspension, steering, brakes, and chassis are the same as before, and the Titan’s ride quality and dynamics fall mid-pack in the full-size pickup sphere. It doesn’t ride as well as the Ram 1500 or the Ford F-150, but it’s smoother than the Chevy Silverado, GMC Sierra or the Toyota Tundra. Body motions and body roll are well controlled.

Towing capacity, curiously, has actually inched downward on 4x2 trucks (9,370 versus 9,450 last year), but the 4x4 stays steady at 9,250. Fuel economy numbers aren’t released yet, but for context, the 2019 Titan was rated 15 mpg city, 21 mpg highway and 18 mpg combined regardless of drivetrain. Nissan says these ratings may not improve, but owners will nevertheless experience a slight fuel efficiency increase in the real world. 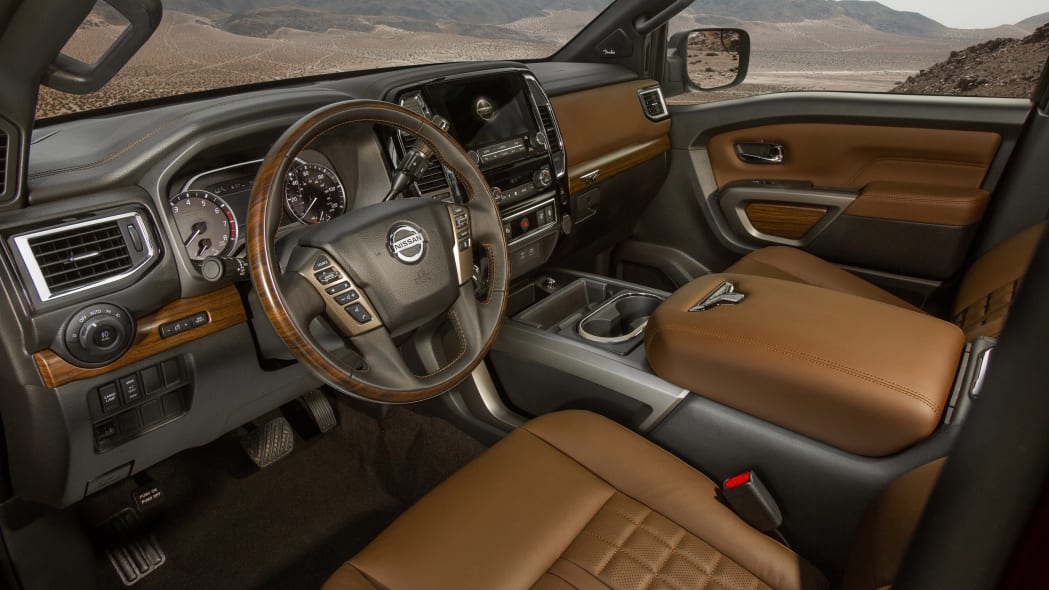 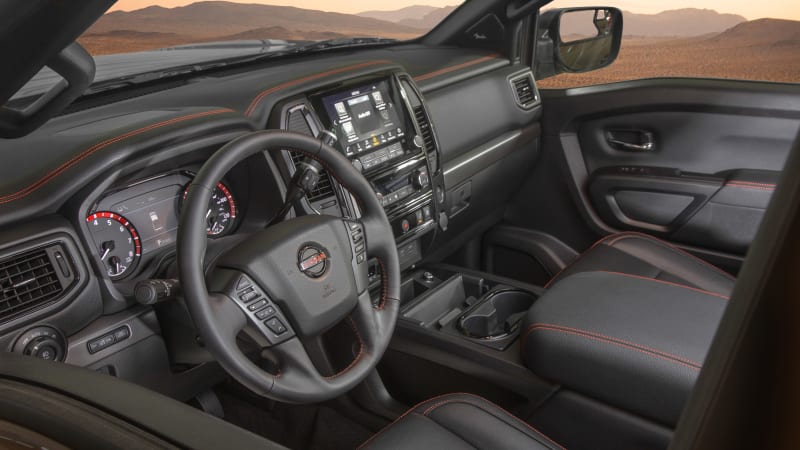 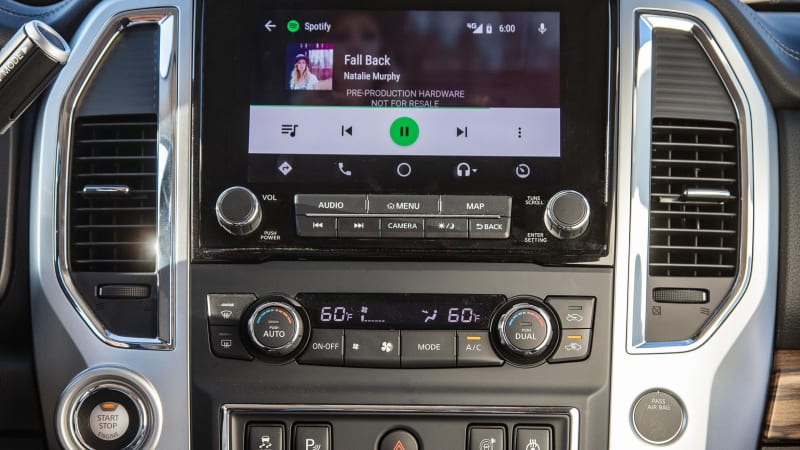 Nissan’s improvements to the Titan’s cabin aren’t radical either, but they too will have real-world implications. There’s a new acoustic windshield so the interior is a bit quieter on the highway, with very little wind noise. The new standard infotainment screen size has jumped from a laughable 7 inches to 8 and Nissan says it’s now the largest standard screen in the class. Even better is the new 9-inch unit that’s standard on Pro-4X, SL and Platinum Reserve. Its graphics are improved as well and the entire center stack is cleaner, reorganized and more attractive. There’s also a newly available Dual Panel Panoramic Moonroof, which Nissan said buyers were clamoring for.

We also like the clever smartphone holders integrated into the console and the new camo-style seat fabric offered on the Pro-4X. Although we still prefer the Ram's exquisitely detailed cabin, the Titan’s interior is very comfortable and its design is preferable to the offerings from Chevy, GMC and Toyota. It’s also no longer far behind the Ford’s.

Over the last few years, the Nissan Titan has been the best full-size truck few have ever heard of and even fewer chose to purchase. Although this is undoubtedly the best Titan ever, sales will probably remain hard to come by in a segment that’s not getting any less competitive. We’ll see. Pricing won’t be released until next month and sales of the improved 2020 Titan will begin early next year.