LAS VEGAS — The 2020 Ford Mustang Shelby GT500 has a lot riding on it, literally and figuratively. In the literal sense, it’s got nearly 4,200 hulking pounds of mass on its tires, the majority of which is over its front wheels. This is hardly a recipe for either handling or rear-wheel traction, the latter of which plays into the figurative pressure on this car.

In that regard, all attention is currently focused on the C8 Corvette, which just switched to a mid-engine layout to help it put power to the ground. The GT500’s supercharged V8 makes 265 hp more than the Stingray.

The other issue is that the other Shelbys, the far less powerful GT350 and GT350R, are already among the most engaging, capable, and rewarding sports cars you can buy — and don’t ever need more power. Plus, they’re equipped only with a manual transmission. So the first question from behind the wheel of the GT500 is: Can this thing be anywhere nearly as good?

If you’re on a race track, your mind will be blown. 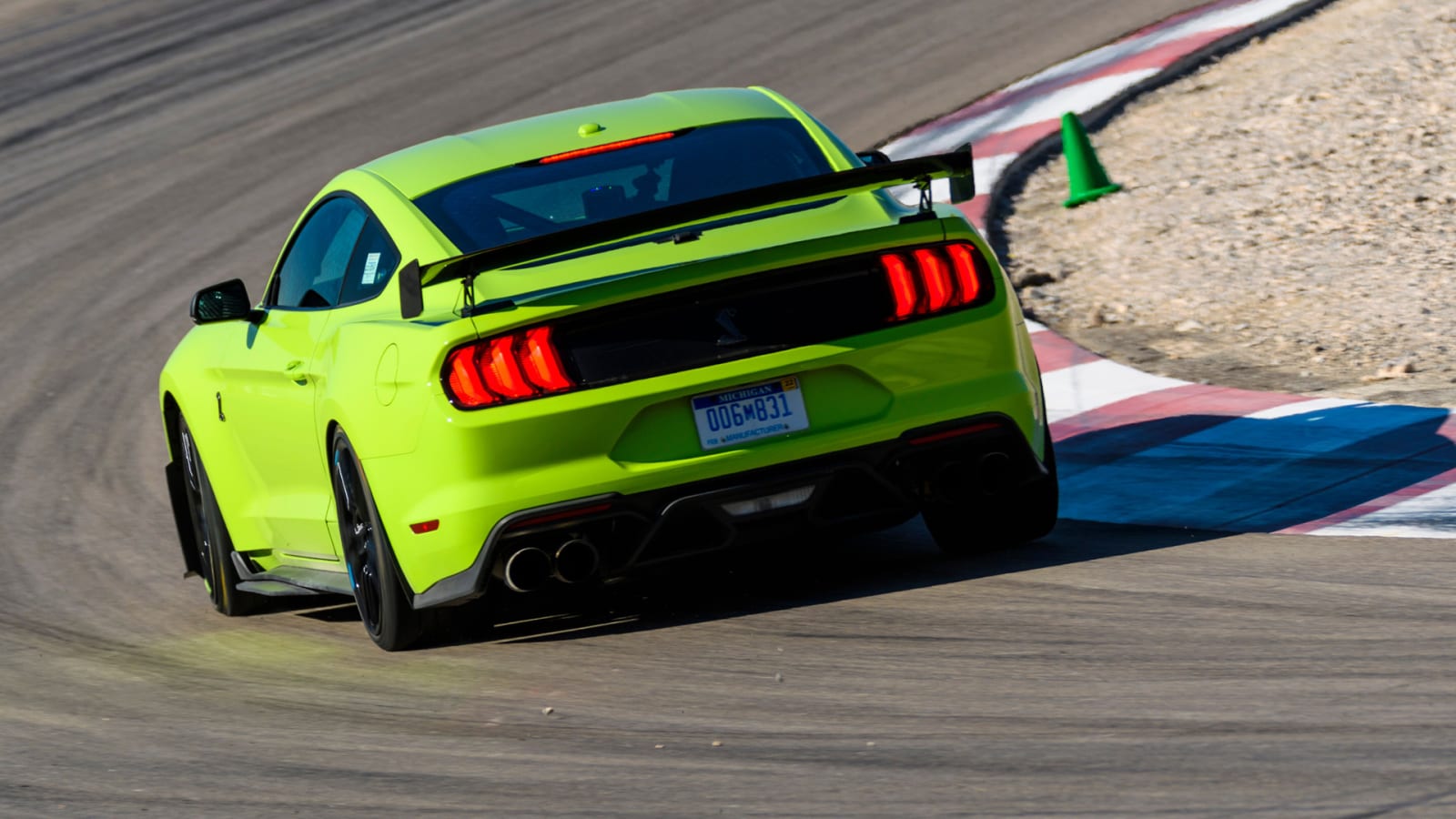 On the very technical Outfield Road Course at Las Vegas Motor Speedway, the GT500 shrugged off both its massive heft and outrageous power, lapping at race-car speeds while being as easy to control as a Miata.

Easier, in fact — with help from its meaty, optional Michelin Pilot Cup 2 tires, the GT500 puts its 760 horsepower to the ground more easily than the Mazda manages its 181. Its chassis is just as neutral, too — a slight whiff of understeer at the limit is easily nixed with any number of tricks from the racer’s toolbox. Infinitely adjustable with the throttle, steering or brake, the GT500 faithfully executes its driver’s commands without ever seeming spooky or twitchy. That’s a hell of an accomplishment for a front-engine, rear-drive car that makes nearly 150 more horsepower than a McLaren F1.

The 5.2-liter is a supercharged version of the GT350’s 5.2-liter 526-hp V8, albeit fitted with a conventional, crossplane crankshaft. The engine note is 100% Mustang once again, filled to its screaming 7,500-rpm redline with violence and orchestra in equal measures. There’s barely a hint of supercharger whine inside the car, just brute engine noises. Standing alongside the track as a GT500 approaches you at full throttle, there’s a barely discernable overlay of high-pitched supercharger noise adding to the V8's drama — just enough to make you realize something very powerful is happening here. 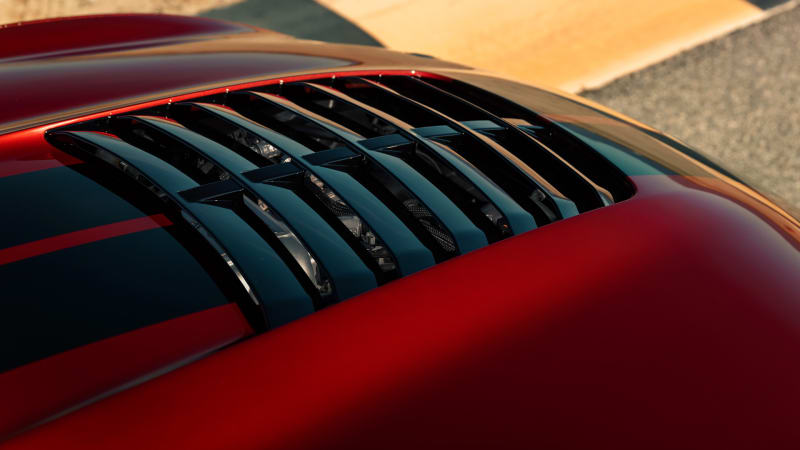 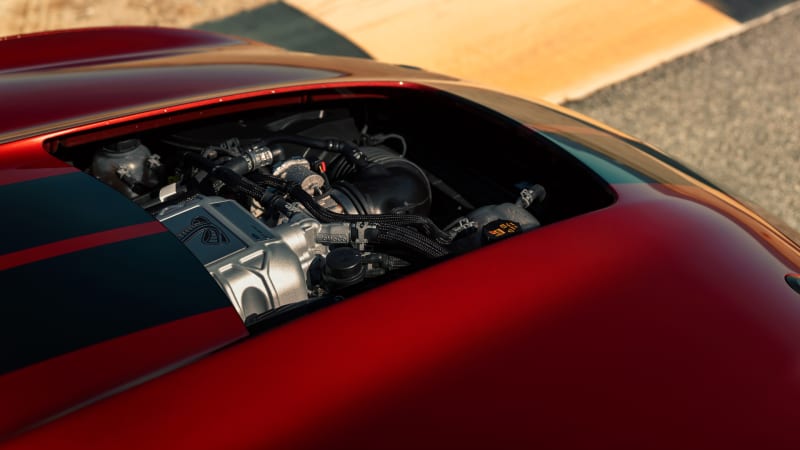 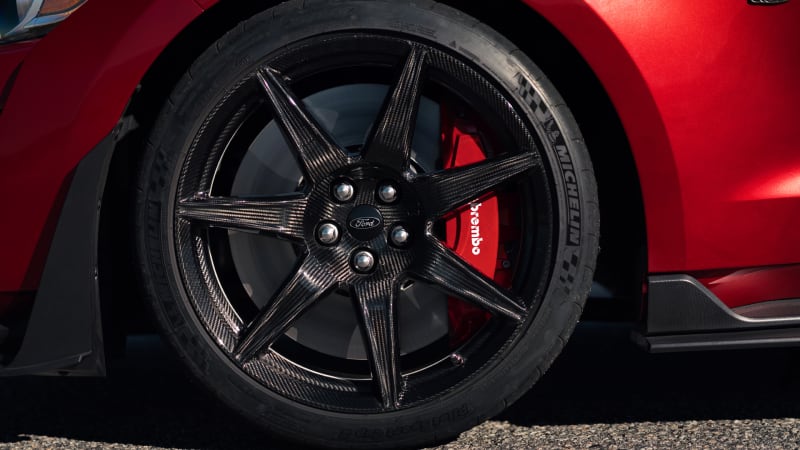 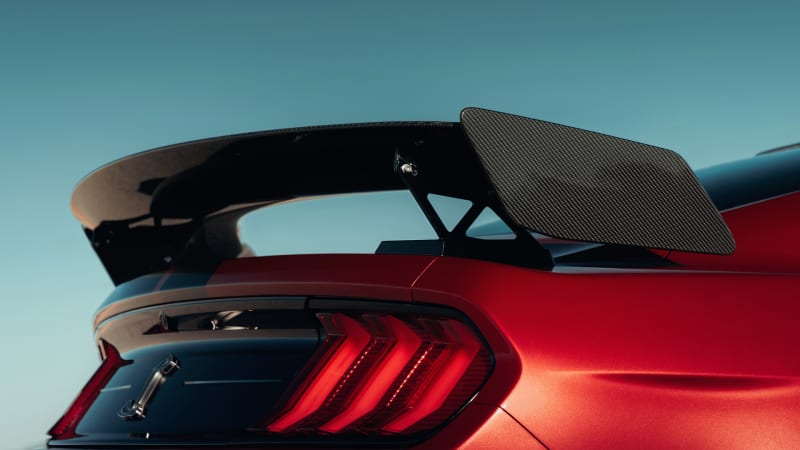 The newly developed Tremec seven-speed dual-clutch automatic is programmed to perfection. Left to choose the gears itself, it picks the correct cog at every single point around a racetrack. Shifts on the straight-ahead are executed quickly and with a quick nudge — but if ever the transmission needs to shift under power in a corner, it’s performed so smoothly that it won’t upset the balance of the car. Using the steering-wheel-mounted shift paddles results in near-instantaneous shifts.

The steering is well-weighted, perfectly accurate, and talkative enough to let you know what both the front and rear ends of the car are doing. Brake modulation is, in a word, perfect, with strong Brembos that survived three hard laps at a time without a whiff of fade. Ford has hinted that the GT500 would be trading in its straight-line reputation for a newfound love of curves, and it wasn’t kidding. This Mustang is the kind of playmate you’d want to lap for the rest of your life.

On the dragstrip, where many previous GT500s have found homes, this Mustang is far less successful. Though it includes functions like line-lock (for ease of performing a tire-warming burnout), the interface to use any of its dragstrip controls is needlessly complicated and time-consuming. And while traction control works quickly and effectively to keep the rear tires from incinerating themselves, it’s all moot because launch control works so slowly. There is a near-second-long delay between the driver lifting his foot off the brake pedal and the transmission dumping the clutch. In bracket-style drag racing, where a few thousands of a second can be the difference between a win and a loss, hundreds of thousandths just isn’t going to fly. 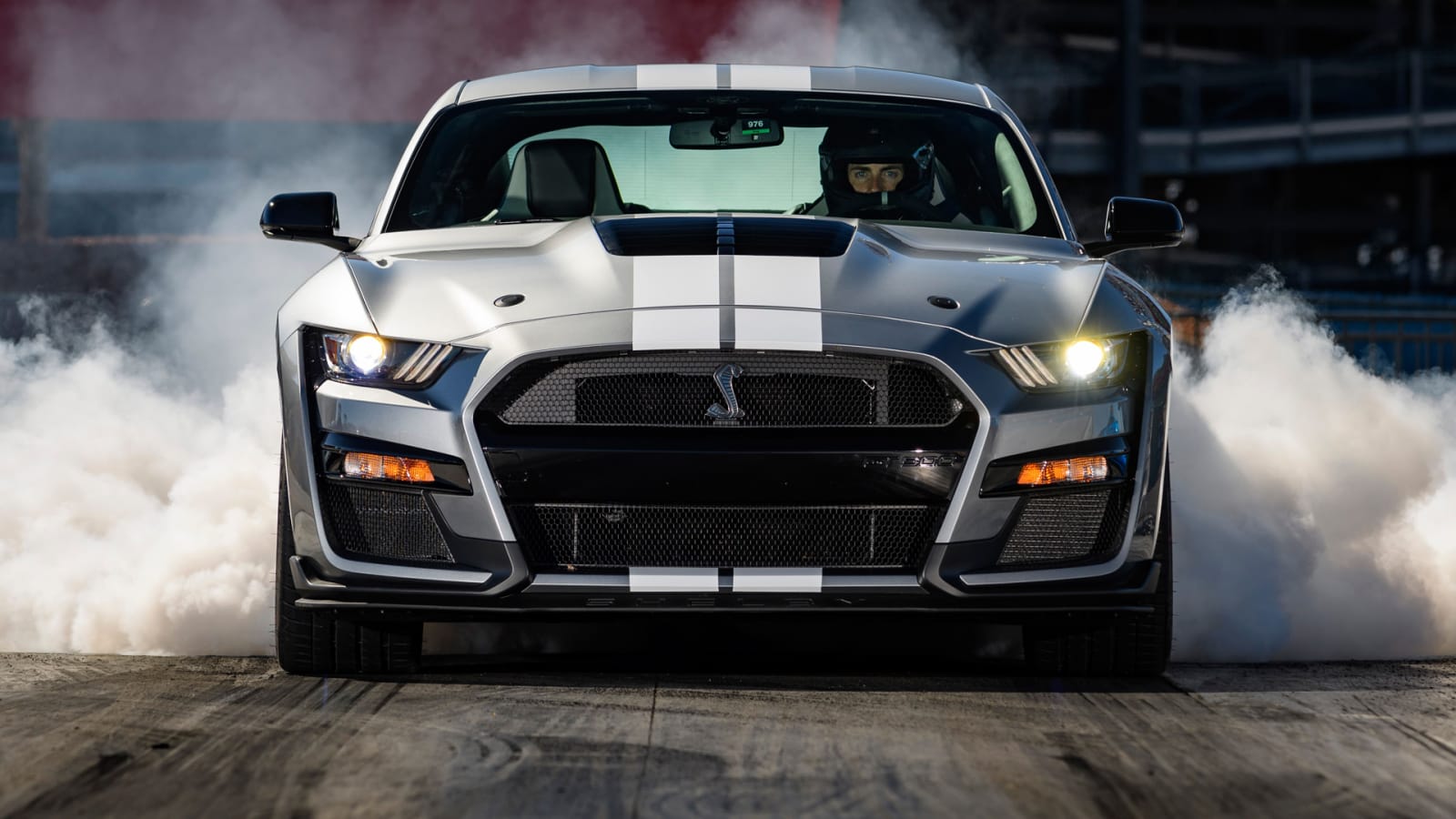 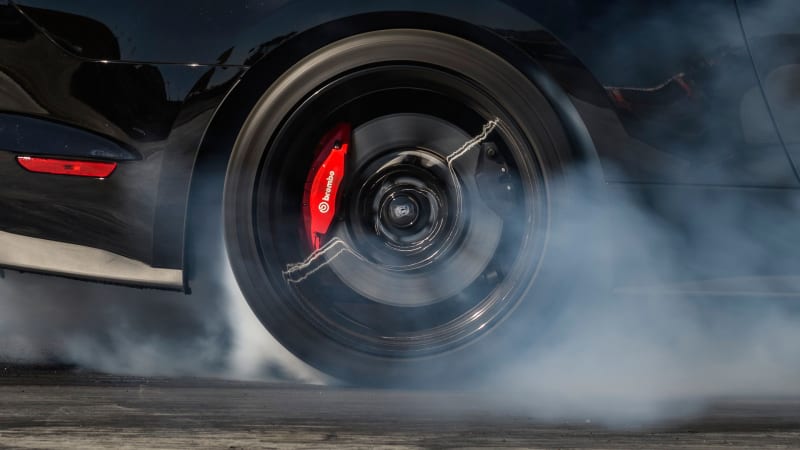 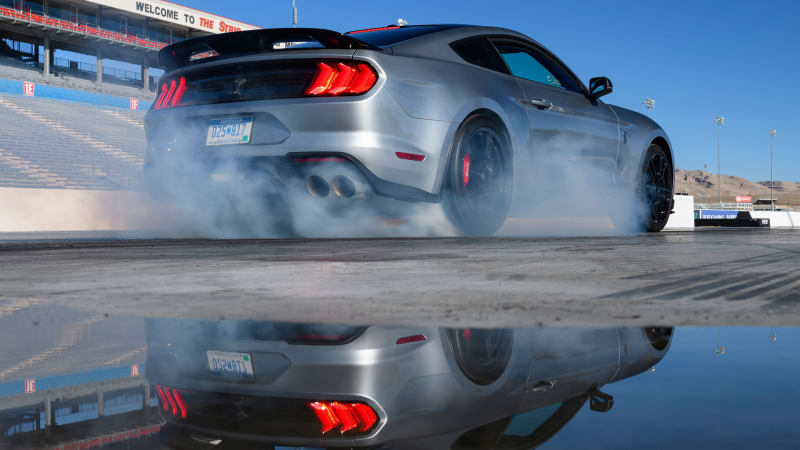 So drag racing might not be common practice for the new GT500, but at least it improves on the old car's on-road manners. In normal driving, you’re completely unaware of the car’s accelerative potential – the Mustang’s cabin is quiet, its ride is smooth (thanks to Jekyll-and-Hyde magnetorheological dampers), and in normal mode, the transmission slurs low-load upshifts like an old torque-converter automatic.

The steering is far less talkative on-center than any other Mustang — Ford had to install a larger, more powerful assist motor in the GT500 because of its additional weight and grip — so normal driving borders on civilized. With the base Michelin Pilot Sport 4S tires, wheelspin can be yours at almost any time you like under, say, 70 mph, but the big, brutish engine note fades into the distance when you’re driving normally.

It’s here where we missed the GT350. The naturally aspirated Shelby Mustangs never let you forget you’re in something truly special. Their much-more-talkative steering and far lighter front end results in something more sports car than cruiser; their engine more charismatic, fizzy and alive. And the bolt-action manual transmission keeps you far more involved in the process of driving. 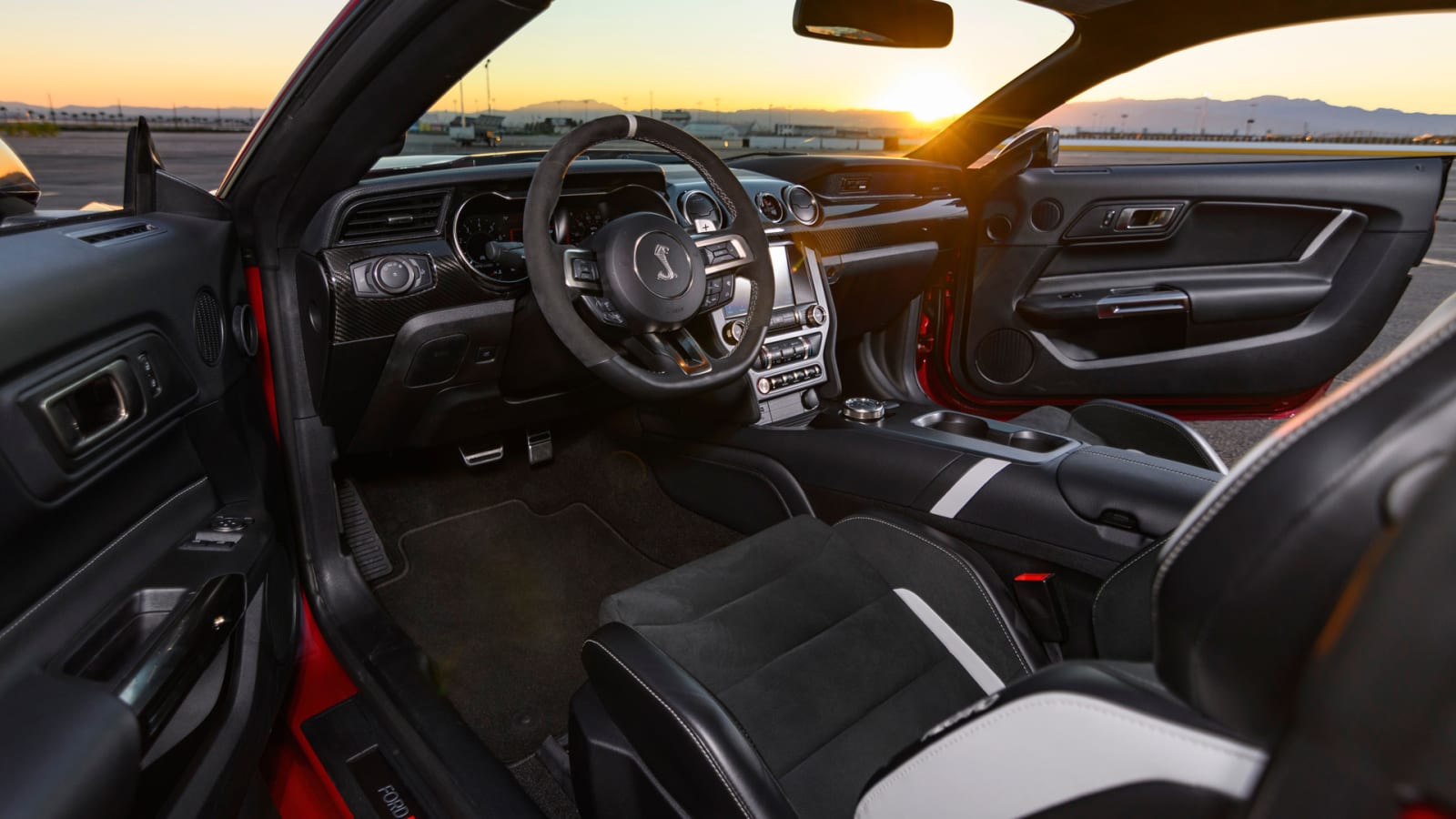 The GT500 is, then, a better everyday car for someone who likes to cruise in comfort. And it’s also the better car for turning laps on a racetrack — if it’s quick lap times you’re after. It doesn’t have the GT350’s instant turn-in, but it has the same all-day approachable demeanor with a GTI’s worth of extra thrust.

Perhaps the better comparison than putting a GT350 up against a GT500 would be to match it against the also brand-new 2020 C8 Corvette Stingray. The two cars' prices are far more similar than their power ratings — the GT500 starts at $71,395. Fully equipped with the $18,500 Carbon Fiber Track Pack (which includes carbon-fiber wheels and those ultra-sticky Cup 2 tires), the ultimate performance Mustang is just more than $90,000 — similarly priced to a Z51-equipped loaded Corvette.

And around a racetrack, the Corvette wouldn’t have a chance. Not in speeds, laptimes, or handling behavior. I know, I've driven one. But that’s still a comparison test that needs to be done — because if initial impressions are to be trusted, the real performance bargain for 2020 isn’t the C8 Corvette, it’s the new Ford Mustang Shelby GT500.

$189 - $2,398 Nat'l avg. savings off MSRP
See Local Pricing
I'm not in the market for a vehicle at this time. Please move this suggestion to the side for 30 days.
Huge Savings