The big luxury sedan is dead, but we know how we'd like to replace it The Infiniti Q70 won’t be returning for the 2020 model year, effectively killing Infiniti’s large luxury sedan. This news comes to us via a report from Motor Authority, citing “the automaker” and Infiniti spokesperson Kyle Bazemore. We’ve reached out to Infiniti to confirm the news, but it doesn’t strike us as a surprising move whatsoever. Update: Infiniti confirmed the Q70 won't be sold in the U.S. or Canada for the 2020 model year.

Back in July of this year, Nissan made it clear that we should expect 10 percent of its models to be cut from its global product lineup. We speculated then that the Q70 and Q70L would be part of these cuts, as it’s the manufacturer’s worst-selling model. To no one’s surprise, that eventuality came true. Infiniti moved 4,479 Q70s and Q70Ls in 2018, making it a super low-volume vehicle in a tough segment. Back in the mid-2000s, Infiniti topped 20,000 sales of its largest luxury sedan (not named the Q70 at the time). Cars like the Mercedes E-Class, BMW 5 Series and Audi A6 are all more enticing buys next to the aged Q70 — a slightly cheaper base price was the last stand for this vehicle, but it looks like a good deal wasn’t enough to save it from our crossover apocalypse.

Infiniti SUV sales are up, as the QX80 continues to gain more ground in 2019. More folks are opting for the raised and rugged options than smooth and comfortable sedans across the industry, which is why we continue to see news like this.

Unfortunately, the Q70 isn’t riding off into the sunset in any sort of glory. We can trace the Q70’s lineage back through a few name changes (Q45 into a series of M cars like the M45 and M56). Its oldest ancestor would be the Infiniti Q45, which was a revolutionary car back in the early 1990s. It featured an active hydraulic suspension system that aimed to provide a supremely comfortable ride and flat cornering at the same time. When equipped with the suspension system, hydraulic actuators on each wheel were able to counter the forces exerted on it from cornering, braking and acceleration. And remember, this was 1991!

Transitioning back to today, Nissan and Infiniti have made it clear that EVs will be the future. We know that we’d love to see another industry-changing flagship sedan from Infiniti, and a fully electric vehicle might just be the way to go about it. Anybody wanting for a production version of the Q Inspiration Concept? 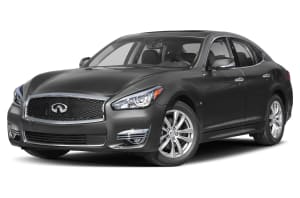