The shape seems perfect for a hatchback

Joel Stocksdale
Update: Infiniti released a second image of its Q Inspiration Concept with a press release about sales. We're not sure why, but we're not complaining and have added it above. The original rear three-quarter image is below in the text.

Following a teaser image and some cryptic hints from designers, Infiniti has mostly revealed its concept for the Detroit Auto Show. It's called the Q Inspiration Concept, which for having "inspiration" in the name, is actually a rather uninspired name. But that's OK, because what it lacks in clever naming it makes up for in a beautiful fastback body.

When the teaser was released, one of the designers mentioned the car would have a "long cabin," and that's no exaggeration, as the greenhouse reaches nearly to the tail edge of the car. It's a roofline that is highly reminiscent of the Audi A7. And as such, it would make a lot of sense for this Infiniti to be a hatchback, too, especially if it reaches production. We can't say for sure if this concept has a hatch, though, since there are some panel gaps at the base of the D-pillar and the Tesla Model 3-style rear pane of glass suggests this concept is technically a sedan. 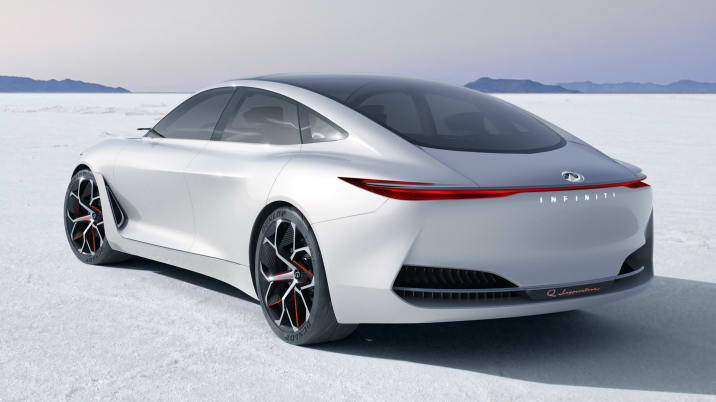 Unlike the Audi A7, the rest of the Infiniti is as curvy as the roof. There's hardly a crease anywhere, and it looks muscular with the big bulging front and rear fenders that flow effortlessly into each other. The clean exterior is accented by a lack of exterior door handles and what look to be cameras for side mirrors.

The contrast to the organic curves comes from the nose and the wheels. The area where the grille would be is more chiselled and aggressive than the rest of the body. The wheels also have hard edges and lots of complicated elements that don't quite fit the organic theme of the rest of the car. Still the car overall is very striking and graceful.

The press release continues to emphasize new powertrains, proportions, and the future design direction of Infiniti. As such, we suspect that this car uses, at minimum, a version of Infiniti's variable-compression engine, and more likely features extensive electrification, if not a pure EV powertrain. The lack of a large opening at the front would seem like further evidence the car utilizes electricity at some level. The car will make its full debut on Jan. 15.