2019 Porsche GT3 meets its family on a California road trip OJAI, Calif. — California State Route 33 north of Ojai is a truly wonderful stretch of asphalt that crests a mountain range in Los Padres National Forest in Ventura County north of Los Angeles. Its miles of curving canyon roads contain plenty of sharp, tight turns that require something nimble, but there are also stretches that warrant a car with some real muscle. A small group of us were driving north from Ojai for Monterey Car Week, and I had the keys to a 2019 Porsche 911 GT3 – the perfect car for just this occasion.

It’s been 20 years since the original race-bred Porsche 911 GT3 debuted. That 996.1-generation car was never sold in the United States (although we did get the refreshed model in 2004), but Porsche brought one over from its museum in Germany just for this occasion. But that wasn’t enough. Porsche also brought a PDK-equipped 2019 911 GT3, a 2019 911 GT3 RS, and the first 718 Spyder to hit American pavement. All three GT3s are the outgoing 991.2 generation. Meredith came, too. That's the name given to a blue 2013 918 Spyder that Porsche occasionally pulls out for shenanigans like this, with Hurley Haywood in tow. You might recognize the name; he’s a man with just a bit of experience behind the wheel of Porsche racing cars.

Our pace up the coast was brisk, six cars playing lead-follow with a Porsche Panamera Turbo S Sport Turismo. Like a game of gasoline-powered musical chairs, I got seat time in everything to see just how far things have come in 20 years. With any 911, there’s a sense of familiarity from behind the wheel. There are far more buttons and knobs in the new car, and the materials are an order of magnitude nicer, but the wheel, pedals and shifter are all placed in roughly the same spot. The five-dial instrument cluster is essentially the same, too, even down to the font. I do wish the steering wheel in the 996 tilted in addition to telescoping. A long torso and fixed-back seats meant I couldn’t see the top of the tachometer. 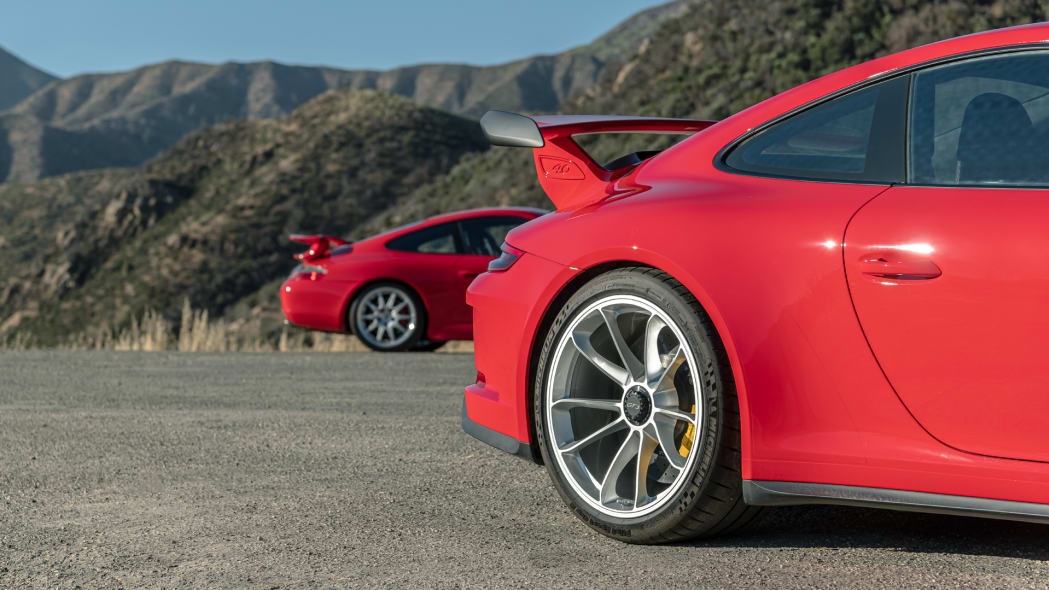 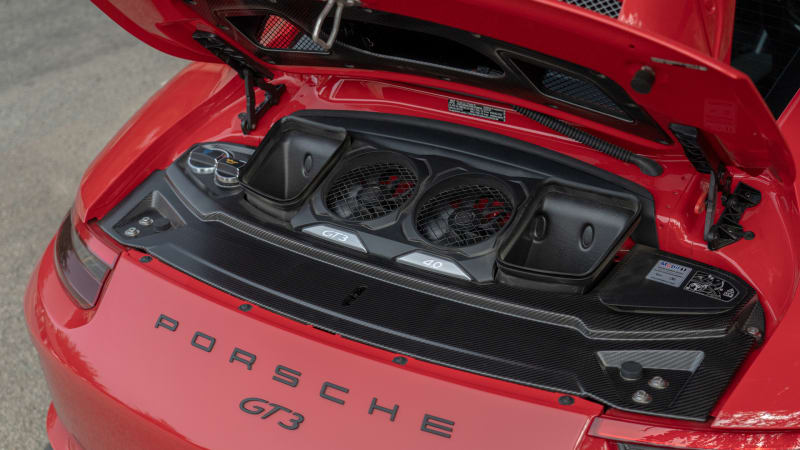 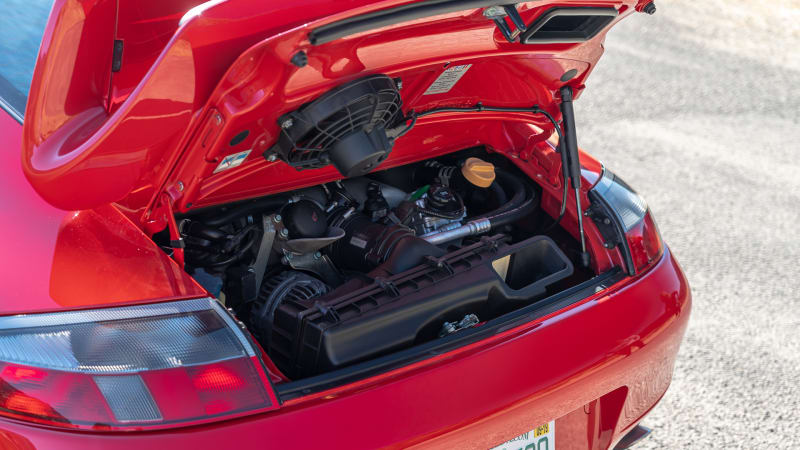 It’s more than just the seating position that feels familiar. Both cars are powered by rear-mounted naturally-aspirated flat-six engines. The 996 makes do with a 3.6-liter unit making 355 horsepower and 295 pound-feet of torque with a 7,800-rpm redline. Named after its designer, Hans Mezger, this legendary engine is partly descended from the water-cooled engine in the 911 GT1 race car. Over the years, the engine has grown larger and more powerful. The new GT3 uses a 4.0-liter flat-six derived from more modern Porsche engines, unrelated to the earlier Mezger design, making 500 horsepower and 339 pound-feet of torque. Redline is up to an eye-watering 9,000 rpm. Power in both cars is sent solely to the rear wheels, and while the 996 makes do with a six-speed manual, the current GT3 is available with a slick shifting seven-speed PDK transmission in addition to a six-speed.

The near instantaneous hit of torque supplied by turbochargers is intoxicating, but there’s nothing like the direct response of a naturally-aspirated powertrain. That seems especially true of the GT3. All that said, there’s nobody home below 4,000 rpm in either the 996 or 991 GT3. A new turbocharged 911 Carrera S can feel quicker than a GT3 running around town thanks to the low-end torque, but it can’t match the GT3’s responsiveness at speed – nor the pure joy you get from wringing the Mezger engine out. It felt light and revved quickly and eagerly, and the mechanical chorus at full song provided one hell of a soundtrack. The 4.0-liter, too, was a real sweetheart and makes the 991 one hell of a rocket on the road.

There’s a heft and weight to the steering, gas, brakes and clutch in the elder 996. It’s heavier than the controls in the newer 991, even if they don’t feel quite as precise. That said, there’s a wonderful directness to the 996. Everything feels analog. Each turn of the wheel or dip into the gas is met with a little bit of feedback in return. There are no electronic aids, so the onus is totally on you to keep the ass from stepping out, but the car tells you exactly what it’s doing and when it’s going to do it. 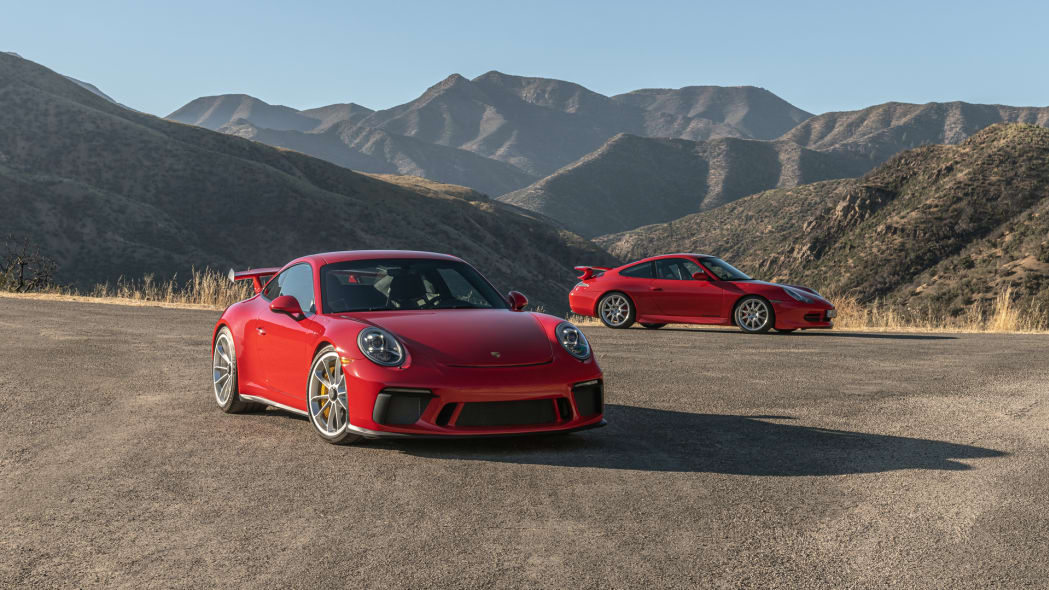 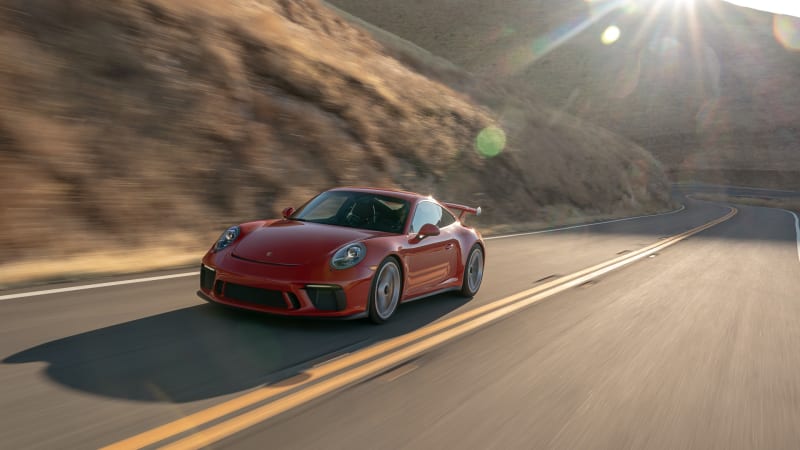 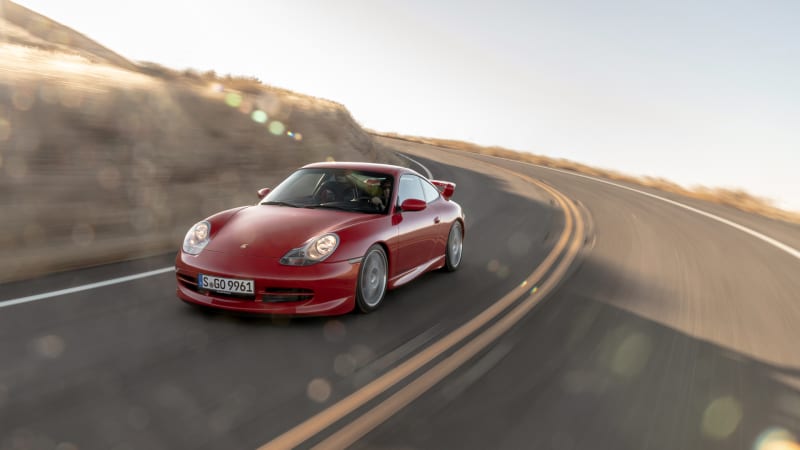 The 996’s steering, though, is magic despite a little dead spot on center. The feedback through your palms is electric, telegraphing every minute imperfection in the road, each little crack in the pavement relaying a small tug or push, fast and direct without feeling twitchy. By comparison, the 991’s steering feels muted. It’s quick and weighted well, but less information comes through, something I noticed after rotating back and forth between the 996 and the three 991 GT3s. It’s like the difference between a good and great set of headphones. It’s delivering all the same notes, but there’s a richness you don’t get in the newer model.

I left the modern car in the softer suspension setting, a tip from Porsche GT division head Andreas Preuninger. On imperfect pavement, a firmer suspension doesn’t always yield better handling. The softer setup gives the car a little more compliance and stability. The 996, meanwhile, had no settings to fiddle with.

Both cars move with a joyful fervor through a corner, with four-wheel steering helping to make the 991 feel a little more nimble. Traction and stability control can be completely shut off on the 991, but there so much grip that it never feels like it might break loose, at least on public roads.

Both cars move through corners with a fervor. It’s thrilling to feel the chassis and suspension working, squatting and powering out of a corner as the weight transfers to the rear. Grip is plentiful in the 991, and four-wheel steering makes it feel as nimble as the 996, despite being notably larger. It’s both faster and easier to drive than the 996, too, which requires a bit of patience and a lot of concentration to maneuver up the coast. The 996 is supremely rewarding, though. Once I got into a rhythm — figuring out where to brake and how early to nail the gas — it was intoxicating. 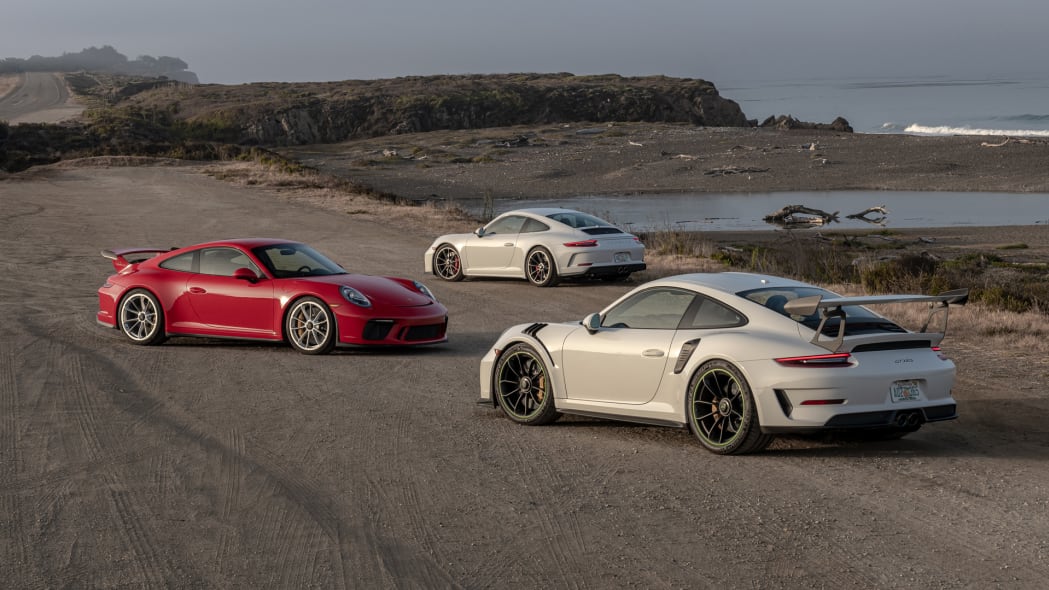 The other cars on this trip were fantastic, too, in their own way. The GT3 RS looks mean, but I couldn’t really exploit the upgrades over the standard GT3 (aero, suspension, less weight, 20 more horsepower) on the street. The 718 Spyder – open-top sibling to the second-generation Cayman GT4 – was a delight, especially top down on the Pacific Coast Highway. That car’s 414 horsepower 4.0-liter flat-six (a different 4.0-liter than the current GT3) shames each and every turbocharged flat-four in lesser 718s. And the 918 Spyder is still as amazing as it was when it came out. It’s unbelievably quick, and the race-derived 4.6-liter V8 is a real monster of an engine.

Still, I kept coming back to the GT3 Touring. It’s such a phenomenal car, and just about as unfettered and direct as you can get with a new vehicle these days. Other performance cars – cough, BMW M5, cough – have five different drive modes with six settings for the transmission, two for the traction control, three for the steering and three for the suspension. Some people may prefer this flexibility, but I feel it muddies the whole thing. I miss being able to get in a car that’s set up to perform at its peak without any fussing about. The Touring looks killer, too, ditching the wing for a clean profile.

I fell in love over and over again that week. Porsche’s GT division keeps turning out hits, and, aside from the slightly muted steering, the cars are as fast and as sharp and as entertaining as they’ve ever been. And they’ve been fast and sharp before. The team seems to have a fundamental understanding of what makes a sports car so enjoyable, and it shines through in everything they built. All modern Porsches are good, but some are just a little better than others.