We follow Hurley Haywood around Road Atlanta in record-setting 911s

ATLANTA — The Porsche 911 GT2 RS is shocking. Other stupid-quick cars can be giggle-enducing, the sheer ferocity of their thrust speaking of lunacy to the point of humor. I laughed when launching a Mustang Bullitt or BMW M5. Not the GT2 RS. It's something different. It's scary.

The 3.8-liter twin-turbo flat-six generates 690 horsepower and is tasked with moving only 3,241 pounds. It's good for a zero-to-60 run of 2.7 seconds. Yet, numbers can't quite do it justice. It's the way it lays down that power: silky, a bit quiet and absolutely effortless. It's not just the speed that it achieves that's shocking; it's that there's always more to dole out.

I'm driving the GT2 RS on Michelin Raceway Road Atlanta where, two days prior, Randy Pobst set a track record for production cars in the very car I'm driving, with a lap of 1:24.88. The car that's now number 2 on the Road Atlanta leader board is the 2019 Porsche 911 GT3 RS, which achieved a time of 1:26.24. The difference can largely be attributed to the power deficit ­— not that a 520-horsepower naturally aspirated 4.0-liter flat-six can be considered deficient. 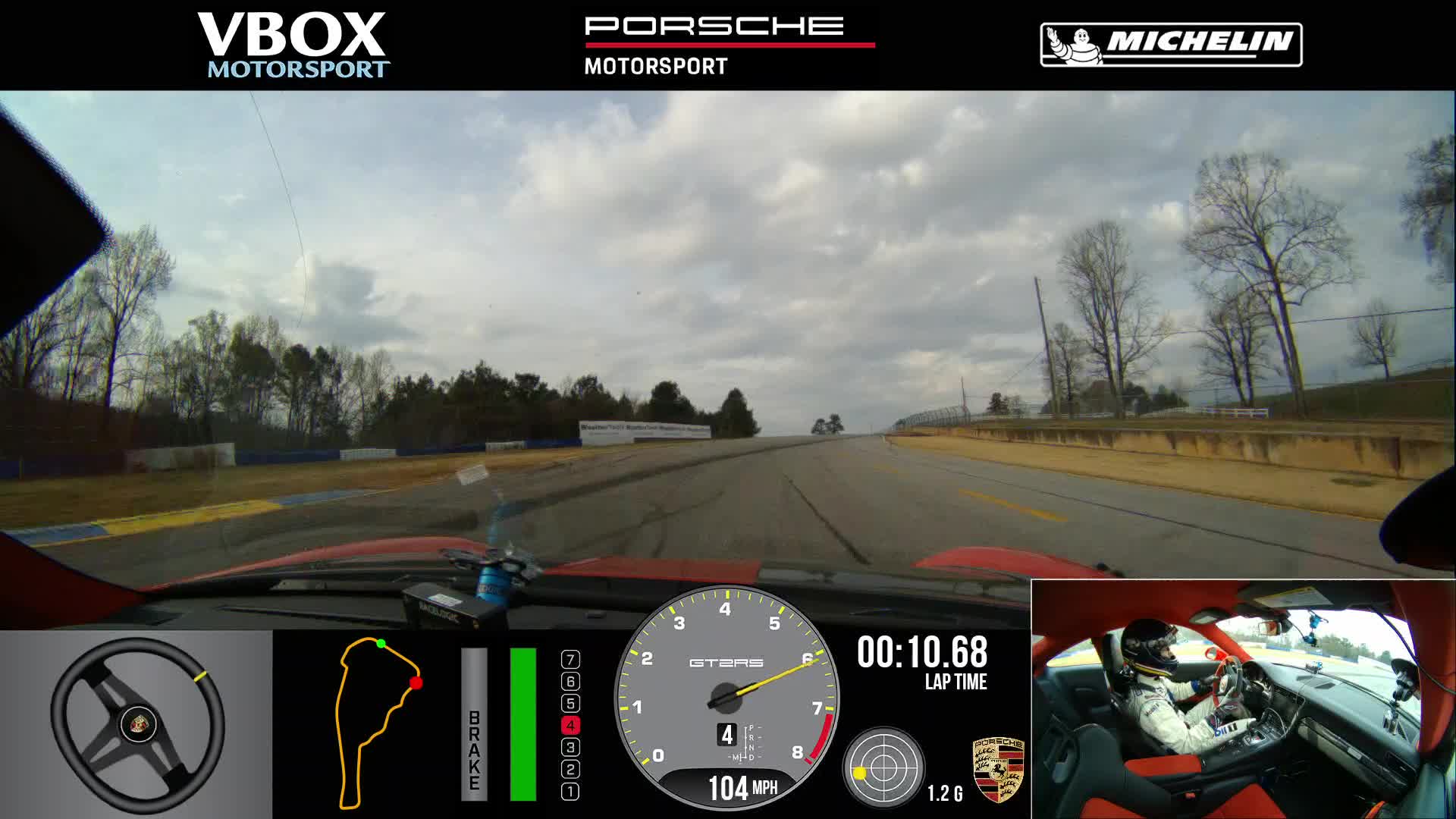 That GT3 RS is now being driven by racing legend Hurley Haywood. At 71 years old, Haywood moves by foot in slow, short steps. By car, he hauls ass. He's showing me, a mere mortal, the line in this two-car lead-follow and setting the pace based on how he perceives my ability to keep up without soiling myself and/or driving into the big, scary wall at the bottom of a blind hill past turn 11. Eventually, he gets us up to a 150-mph max on the back straight, the GT3 RS pinned repeatedly to its 9,000-rpm redline. I know he's maxing out because I'd be following him in a second GT3 RS later.

In this moment, however, the twin-turbo GT2 RS never comes close to full throttle. There was indeed more to dole out. I could've gone at least 170 mph. I could've passed Hurley Haywood. That would've been nuts. The GT2 RS is nuts.

A big part of that, however, is just how obviously light this 911 is and how easy it is to drive. The very first impression of the GT2 RS was the steering. The night before at dinner, and please forgive the continued name dropping, Randy Pobst noted that he loved how he could just delicately control the car during his record-breaking lap, emulating his action with thumbs and middle fingers, gently moving up and down, almost as if operating a marionette. Thirteen hours later, I knew exactly what he meant. It's so beautifully light in effort, indeed delicate, and subsequently spectacular in its precision. This is not a car you fight. It's a part of you.

The GT3 RS steering is similarly sublime, but it requires a bit more muscle. Though the systems are virtually the same between the two RS cars, possible explanations for the weighting difference are the GT2's turbo engine that adds about 100 pounds hanging off the rear, and the 25 fewer pounds of unsprung mass due to the optional magnesium wheels. They're so light, the tires weigh more. Now seems like a good opportunity to reacquaint you with what you get with the GT3 RS ($187,500) and GT2 RS ($292,200). These would be the grand finale of sorts for the 991 generation, living for a short while alongside the all-new but less extreme 992 Carrera siblings. Compared to the regular, more road-going GT3, also still on sale, the track-focused 2019 GT3 RS coaxes more power from its glorious naturally aspirated flat-six (520 hp versus 500) and like the GT2, comes only with the seven-speed PDK automated manual gearbox.

I'm firmly in the Save the Manuals camp, but on track, I concur with our GT3 first drive conclusion that the phenomenal PDK is the right tool for the job. Pobst left it in automatic mode during his record-breaking laps and it's easy to see why. Never did I question PDK's gear-changing wisdom nor even think about pulling one of the carbon fiber shift paddles. Off the track is a different story, which is why it's nice the GT3 and GT3 Touring maintain the three-pedal option. The GT3 RS, by contrast, is meant to live on a track. The GT2 RS is meant to destroy it.

To those goals, the RS models go on an extensive diet achieved by exotic materials that sound like they should belong to something built by NASA. The structure is an aluminum-steel composite, the roof and optional wheels are magnesium, various other body panels are carbon-fiber reinforced plastic (CFRP), the rear windows are lightweight glass, and the front and rear fascia consist of a polyurethane that features hollow glass spheres and carbon fiber elements. The interior ditches plenty of sound deadening and adds standard fixed-back racing seats made of CFRP and covered in lighter-weight Alcantara. In the GT2 RS, the as-equipped optional Weissach package chops out an additional 40 pounds with multiple other components made of carbon fiber and titanium. 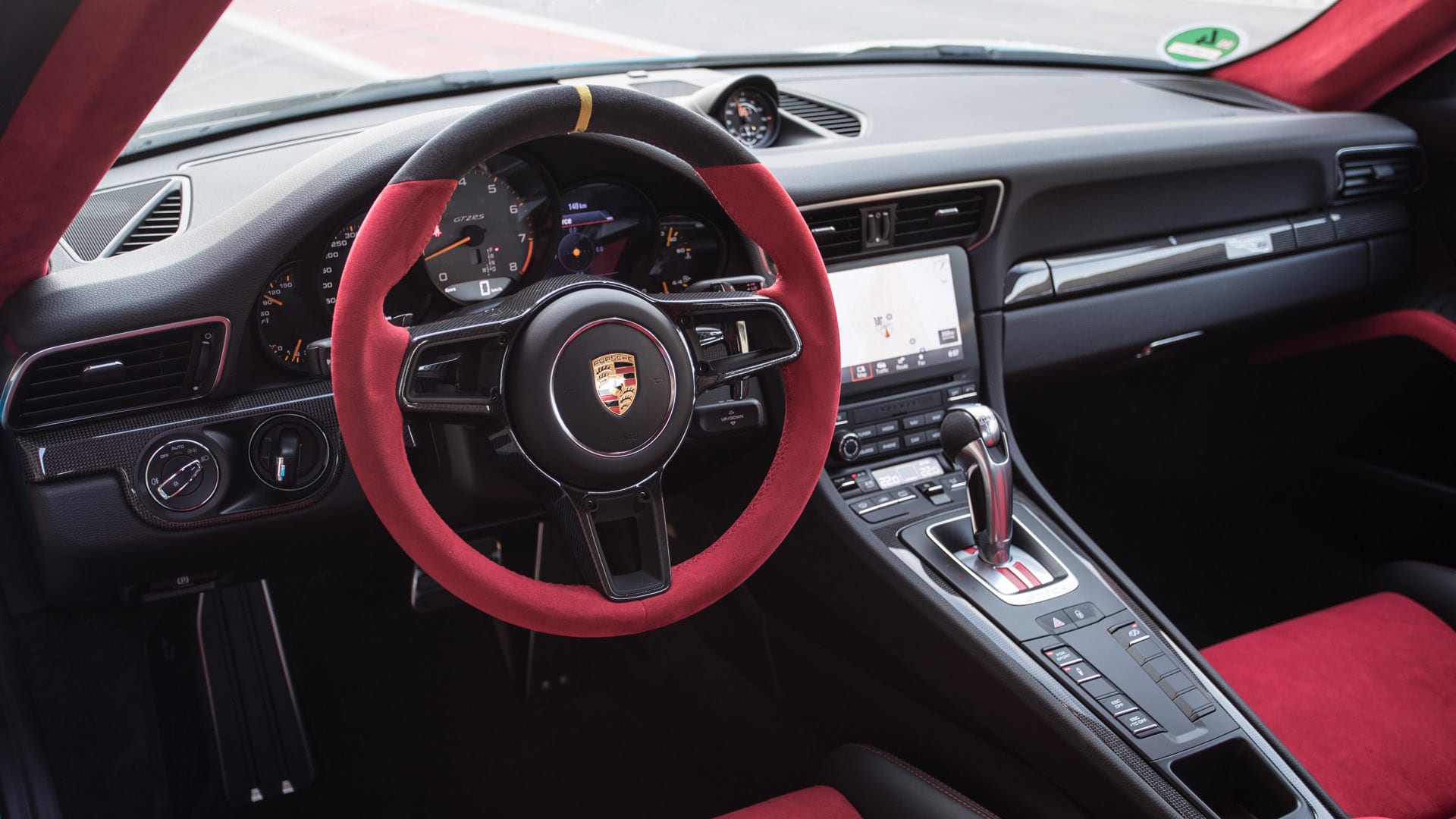 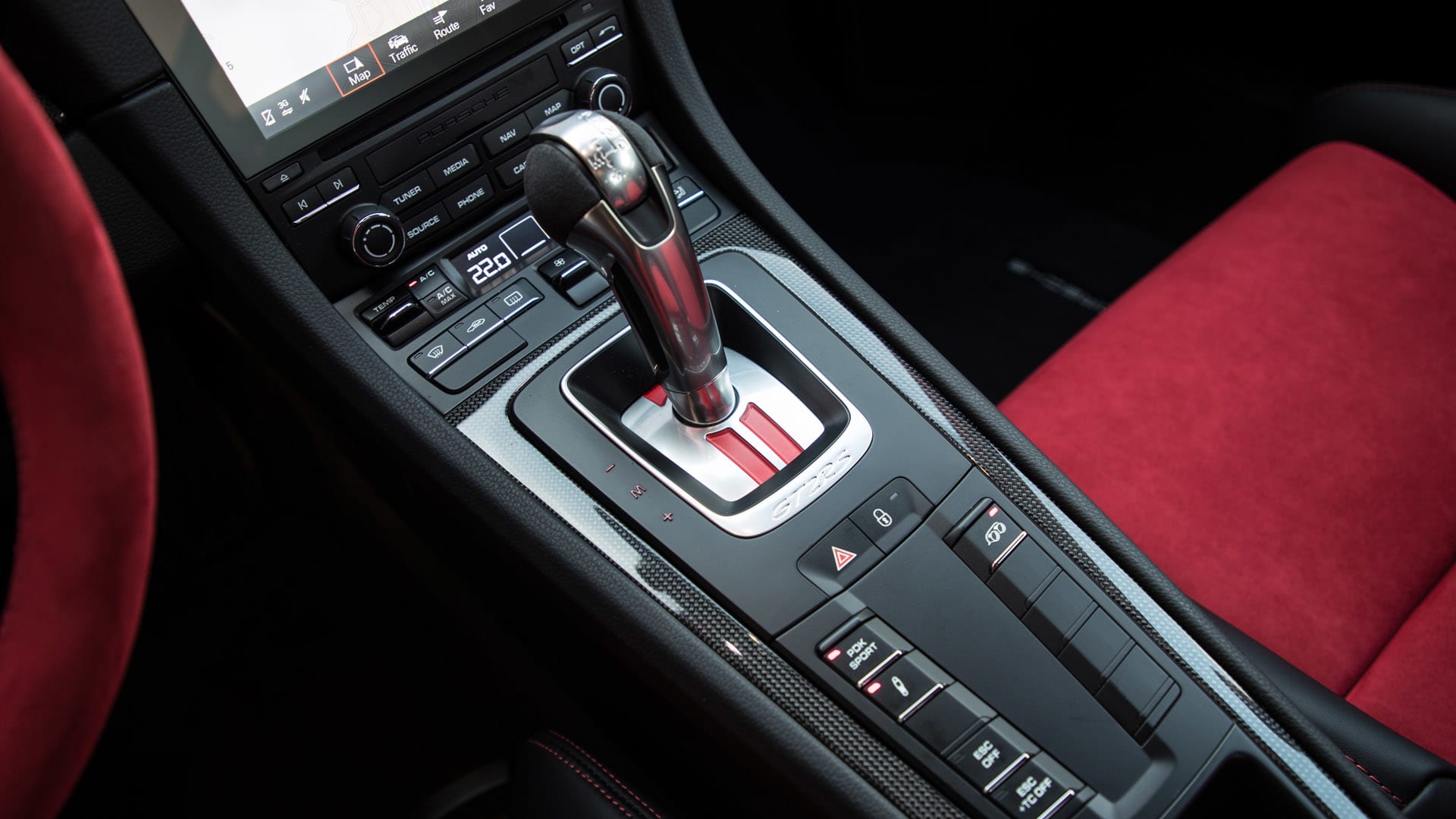 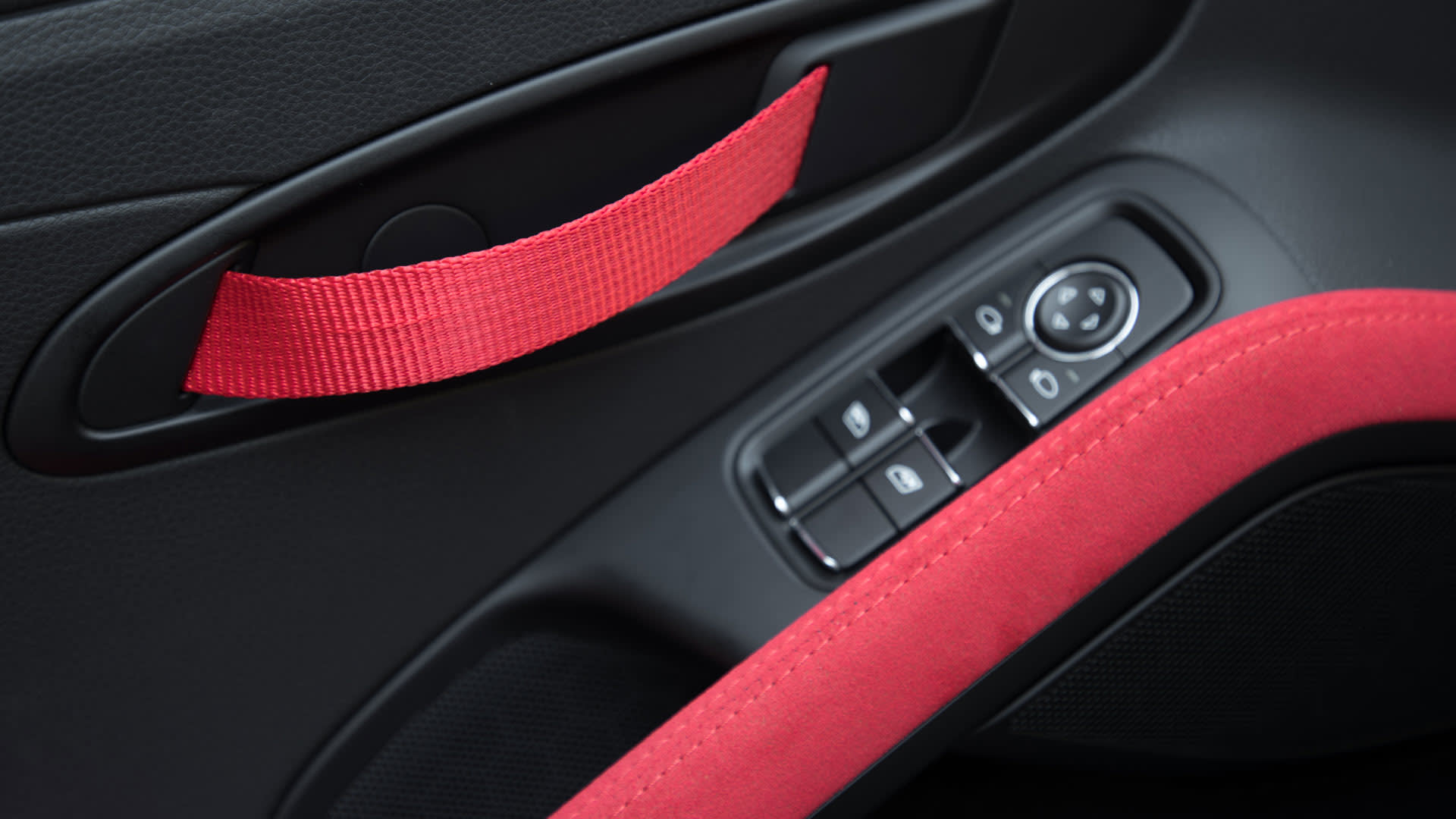 Then there are the aerodynamic improvements. The two air intakes in the frunk lid for brake cooling feature a shape originally developed by the National Advisory Committee for Aeronautics, the predecessor of NASA. The front spoiler and side skirts are widened (for 2019, those on the GT3 RS now match those on the GT2), the black wheel slats in the front fenders channel air away from the turning wheels, and the rear wing is manually adjustable. It can achieve a maximum downforce of more than 1,000 pounds.

As for the massive composite brakes, they really can't be praised enough. The trio of RS cars on hand ran almost continuously for nearly two hours at full attack – I drove it in the middle of that session and at the very end. The wonderfully feelsome and easily modulated pedal felt exactly the same in both sessions. When you're raging full throttle at 150 mph downhill toward a 40-mph chicane (or part throttle in the GT2 RS), knowing the brakes are there in full force is quite reassuring.

Now, there's quite obviously an immense amount of grip given all that downforce, the colossal Michelin Pilot Sport Cup 2 R N0 track tires (co-developed by Porsche), the wider body and track borrowed from the 911 Turbo, dynamic engine and transmission mounts, the adaptive suspension, the rear wheel steering, Porsche's whip-smart stability control, and the Torque Vectoring Plus fully variable rear differential lock. The thing is, though, you don't really notice it. Much as the RS cars don't seem to fight you, they also don't seem to fight the laws of physics. They seem to bypass them altogether, effortlessly dancing between corners.

While Pobst and Haywood confirmed the previous GT2 RS could be a scary beast that could overwhelm its available grip, that's not this current version. With a prudent right foot, it's actually shockingly controllable. As Basem Wasef noted in our GT2 first drive, it's not a widowmaker. Never once was there a puckering moment in 40 minutes behind its Alcantara-wrapped wheel where my hands mostly maintained the marionette-like grip described by Pobst. 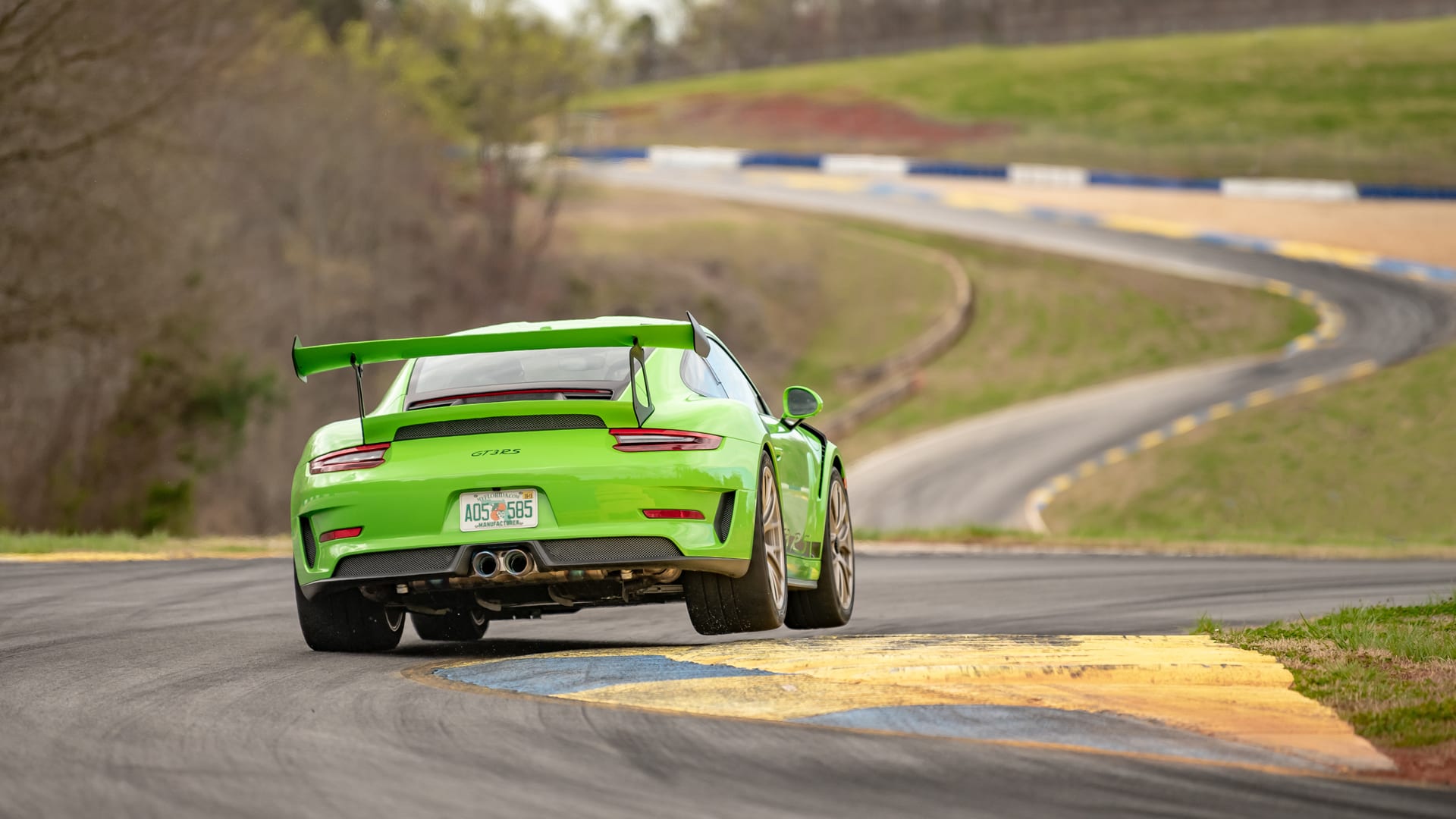 That said, the GT3 RS is the less intimidating, more approachable and ultimately more visceral car despite giving up 0.3 second of 0-60 time and nearly 2 seconds around Road Atlanta. While its twin-turbo sibling initially shocked with its thrust and speed, the first blast in the GT3 RS made me want to spike a football and exclaim a four-letter word followed by "yeah." The gloriously mechanical whine it produces builds to a sonorous climax at the 9,000 rpm redline. The turbocharged GT2 tops out at 7,200. The fact that Porsche ripped out much of the sound deadening makes it even easier to hear all this sonorous glory.

The GT3 RS needs to be pushed harder to achieve the same speeds that the GT2 sort of sashays to. Harder means more revs, more sound, more excitement. It's also not scary, and although a different track might put the GT2's power advantage to greater use, I think I'd still get the saner, supposedly lesser version. Then again, it sure is easier keeping up with a racing legend when you have a 170-horsepower advantage.