2021 Genesis GV70 spied for the first time at the Nurburgring

It's the smaller sibling to the GV80 crossover 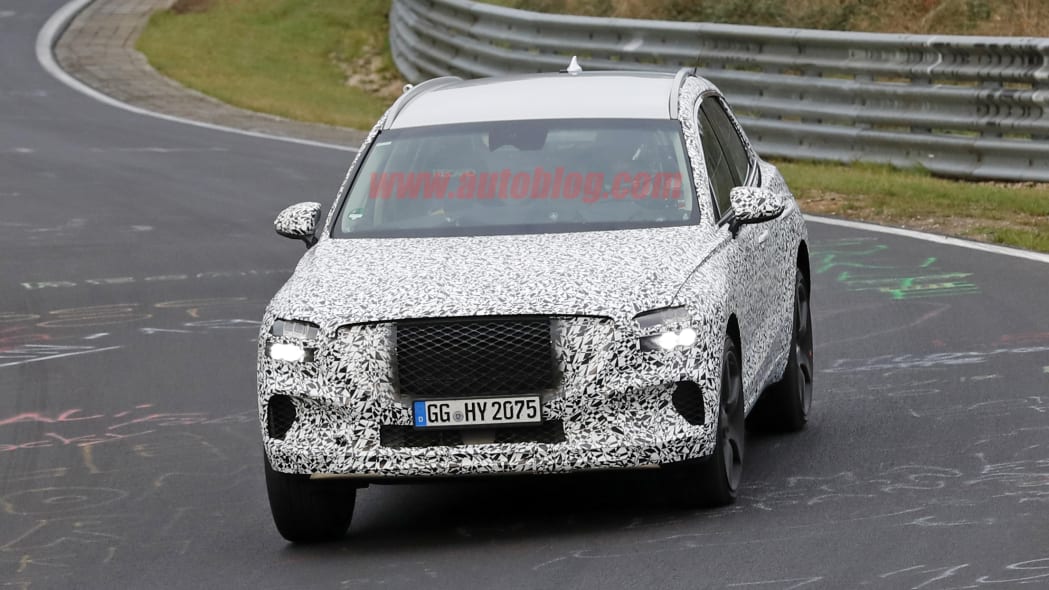 The first Genesis crossover, the GV80, has been seen a few times, both as a prototype in spy shots, and as a concept a few years ago. Now we get our first look at its smaller, upcoming sibling, the 2021 Genesis GV70. It shares a number of design cues, but features some unique touches of its own.

The nose of the GV70 clearly identifies it as a Genesis. It has the large, likely pentagonal grille with a metallic mesh insert and the horizontally divided headlights seen on the GV80 and the new G90 sedan. The hood also sits higher than the fenders, and the fenders blend into a strong shoulder line.

Unlike the GV80's shoulder line that extends all the way back, the GV70's line seems to dip down earlier, and there's a lower crease in the doors that seems to rise to meet it. The GV70 has a unique profile and window treatment, too. The D-pillars lean forward more than those on the upright GV80. There's also a piece of chrome trim that snakes up the A-pillar around the windows, and then follows the C-pillar back down. It's somewhat similar to the chrome on the Hyundai Palisade.

The back of the GV70 again echoes the GV80 and G90 with its wide, split taillights. It does have some unique touches of its own here, too. Most notable are the upright exhaust tips poking through the rear bumper. They're framed by a diffuser-esque indentation.

Genesis reportedly will introduce the GV70 in 2021, following the GV80's launch either this year or next. We would expect it to use a version of the rear-drive chassis underpinning most current Genesis cars. It will likely also offer both the turbocharged 2.0-liter inline-four and twin-turbocharged 3.3-liter V6 found in the Genesis G70. Don't expect the G70's manual transmission to be available, though.