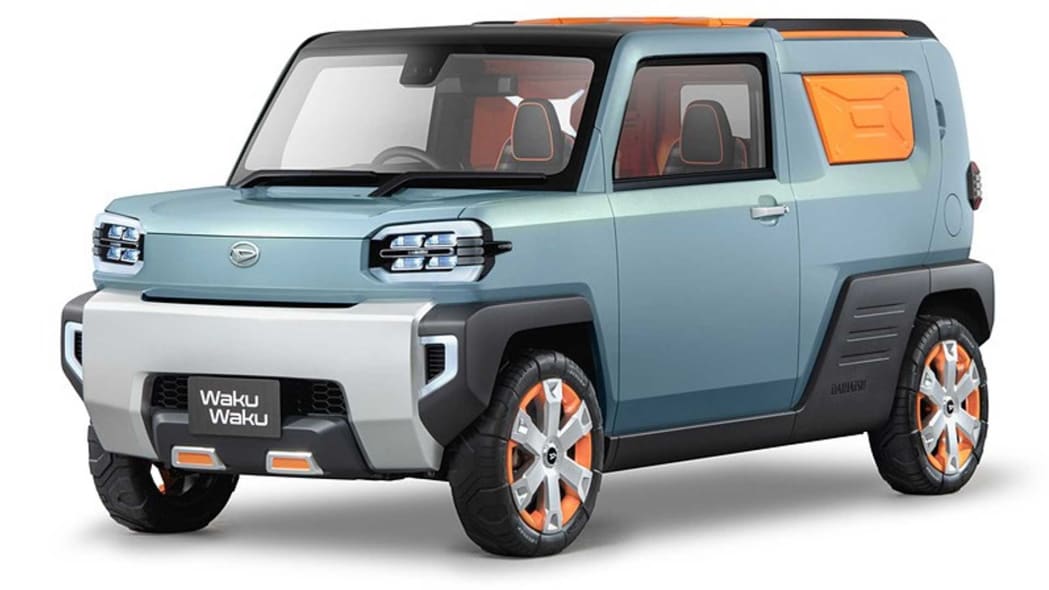 When Suzuki showed off two of its concept reveals for the Tokyo Motor Show, one was a kei car called the Waku Spo. As far as we can tell with Internet translators, that renders the words "box" and "ish," which we'll resolve into the entirely apt descriptive "boxy." Turns out when you double up on the waku, however, you get excitement, which could be how Daihatsu came to name one of its four Tokyo concepts the Waku Waku. The cerulean blue box with the searing orange highlights looks like the result of a kei car mixed with an overlander. Black cladding hunkers over tiny wheels shod in aggressive rubber. The rear windows are replaced by full-length interior panels with a jerry can motif above and attachment points below. The back half of the roof opens onto an additional storage area, and the bumper triples as a step and a platform. What's not to like?

Sticking with the two-up names throughout, next comes the Ico Ico, an autonomous shuttle with its own robot assistant named Nippote. At just 58 inches wide, the four seater's designed to navigate especially cramped urban centers. Slide doors, a retractable ramp, and modular seating that can be moved around the cabin make easier access for the disabled.

The Tsumu Tsumu is a kei-class goods carrier with a removable cargo box. The renderings show an industrial-strength drone that sits behind glass panels when not in use, and launches from the roof when operational. The artwork shows the foodservice box, the Tsumu Tsumu turned into a tiny food truck.

The Wai Wai minivan makes room for two more passengers than the Ico Ico, swallowing six people in three rows of two. Front doors open to nearly 90 degrees, and rear sliding doors run to the back of the second row for better ingress and egress. Twin fabric sunroofs keep prevent a gloomy interior, and all of the seats fold down for when cargo instead of people needs hauling.

We don't know what powers the concepts and what other neato tricks they might hide, but we looking forward to finding out when the Tokyo Motor Show opens later this month.