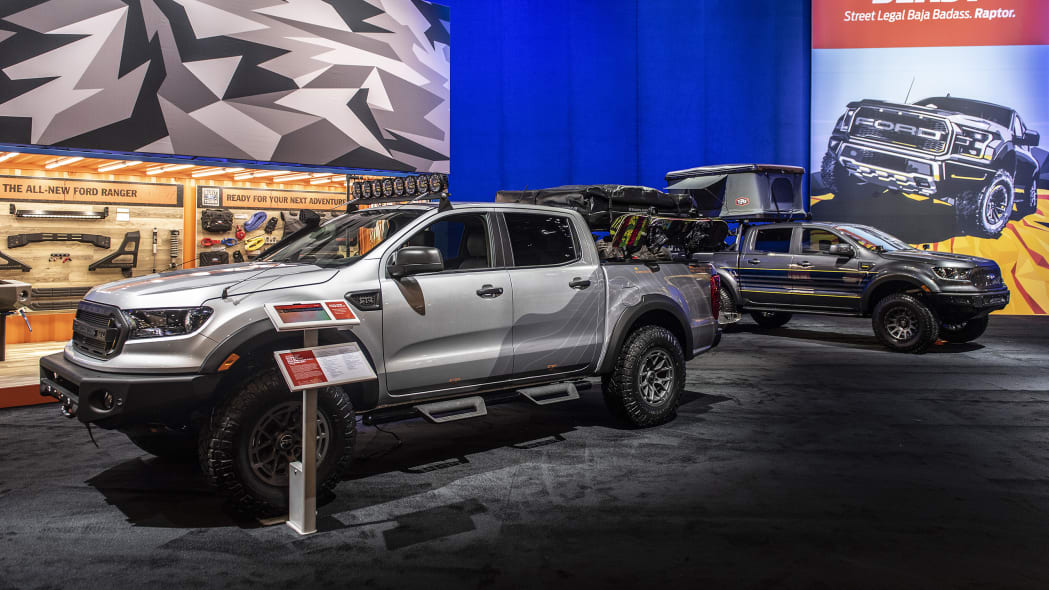 The Ford Ranger is the Blue Oval’s golden boy for 2019, so it only makes sense that there are six Rangers coming to SEMA. Most of them are off-road builds with light-to-heavy modifications, but one of the tuners went the other way with a Ranger.

Two Ford Transit Van builds were also revealed today. Both are intriguing, but one of them swapped wheels and tires for tracks. We’ll get to those in due time, but let’s start with the trucks. 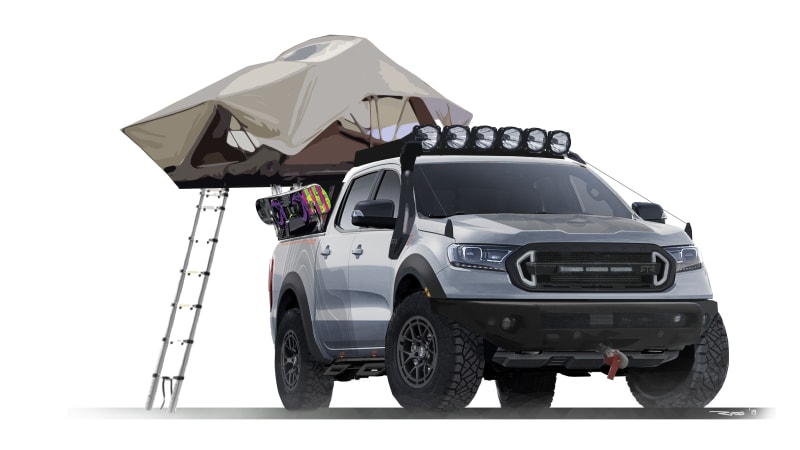 This truck was taken in by Vaughn Gittin Jr.’s RTR company, known for producing some extra-special Mustangs. However, the company has done trucks before, and they’re at it again with this off-road overlanding build. The suspension is modified with a Fox-tuned Ford Performance off-road suspension leveling kit that gives it a 2-inch lift. Further modifications include RTR Tech 6 wheels, 33-inch Nitto off-road tires and underbody rock protection. Custom RTR fenders, a full suite of lights along the top and the tent in the bed add to the air of off-road capability even further. 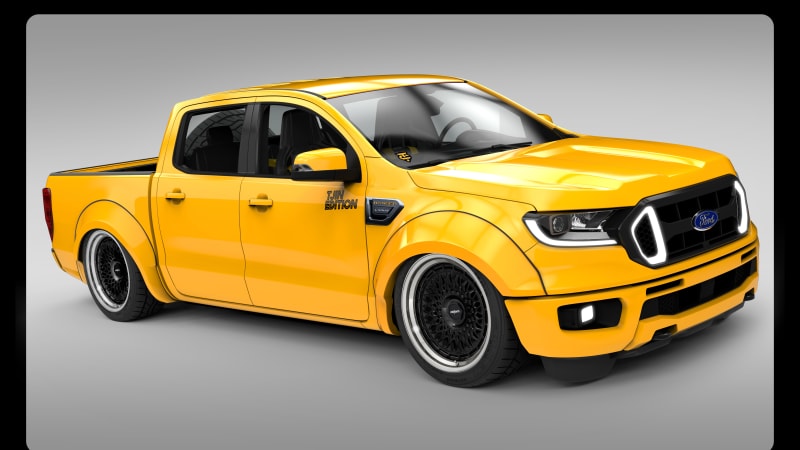 The Tjin Edition Ranger quite literally brings things back down to earth. A full air suspension is fitted, lowering the Ranger a full 8 inches in front and 9 inches in rear. Performance Falken tires and custom 20-inch Rotiform wheels give it the stance required for a lowered truck. Performance modifications include a Ford Performance cat-back exhaust, Roush Performance intake, RPG front-mounted intercooler and a Baer big brake kit. You’ll notice the Ranger’s appearance is pretty heavily modified with RTR fender flares, an RTR grille and a one-off wooden bed. 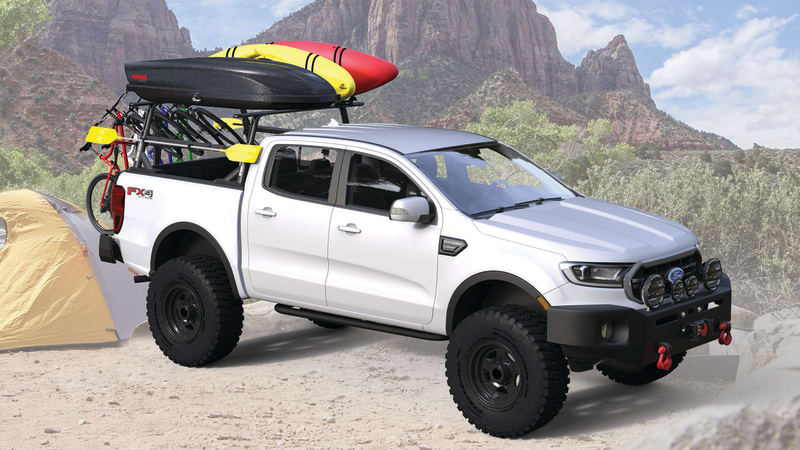 Do you like carrying things? Yakima hopes you do, as Ford and the car accessory company have combined for a Ranger build. It gets a bunch of Ford Performance parts, including the 2-inch lift, cat-back exhaust and rear differential cover. Big 33-inch BF Goodrich KO2 tires are fitted to off-road wheels. The Yakima part comes in when you take a peek at the bed. Yakima’s bed rack and bike carrier system are fitted with a whole bunch of outdoor gear fitted to the pieces. 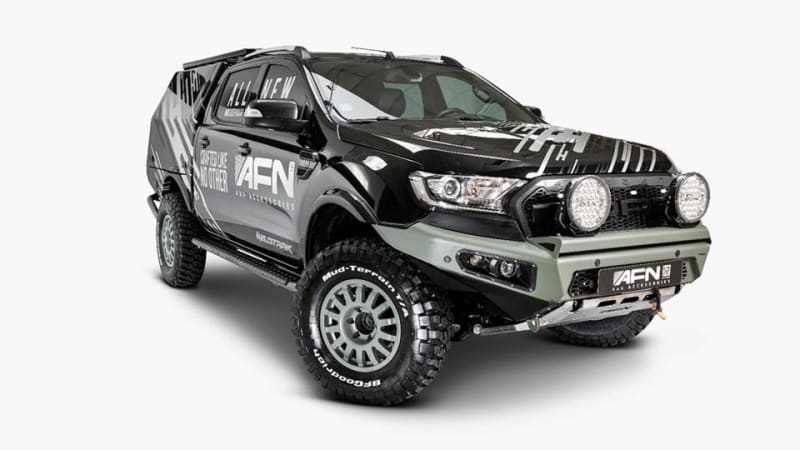 Maybe you aren’t entirely familiar with Advanced Accessory Concepts, but they’re the ones who completed this SEMA build. It has a whole lot of accessories on it. The truck gets an AFN skid plate, rock sliders and bumpers. AFN also did the conversion to an aluminum tray bed and added a canopy. This truck gets lifted more than the others, featuring a 3.5-inch Icon lift kit and a Warn winch to pull you out of whatever you stick it in. To top it off, there’s a 50-quart refrigerator by ARB to keep those drinks cold while you off-road. 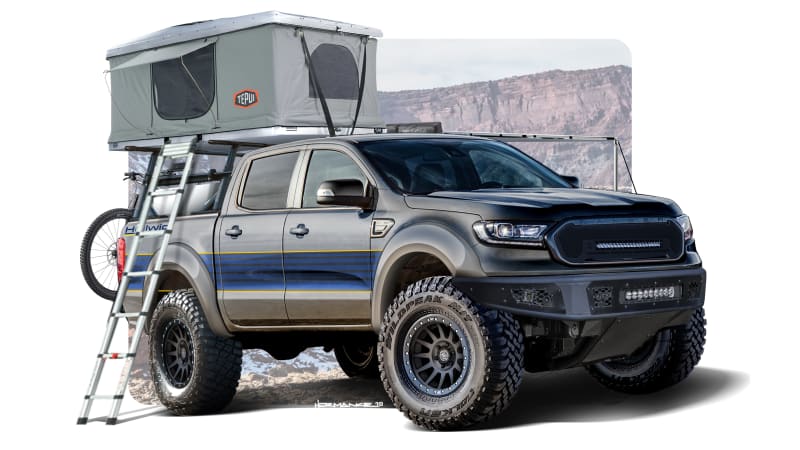 The Hellwig build (sweet name) is another off-road- and overlanding-focused Ranger. The same 3.5-inch Icon lift kit is applied here, but we also get 17-inch Icon wheels and Falken off-road tires. Hellwig sway bars, a Ford Performance cat-back exhaust and rear differential cover should all help this truck when off the beaten path. The most unique modification done here happens to be its ability to harness power using solar panels. You can run all your camping equipment using the Goal Zero solar tech that’s included on the top of the truck. 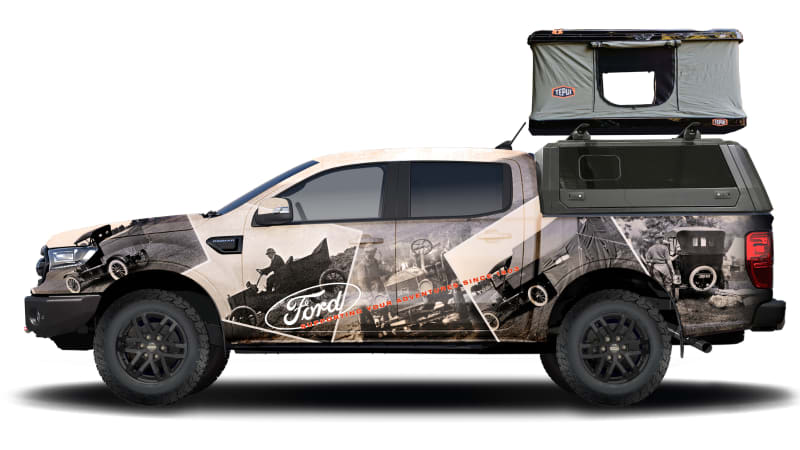 The Ranger features a pretty intense Ford wrap job, but is also chockfull of performance parts. The two-inch lift kit, KO2 tires wrapping Ranger Raptor wheels, Rigid lighting kit and Warn winch will all improve your off-roading experience. Just like many other builds this year, the Ford Performance Parts Ranger has a tent atop the bed. 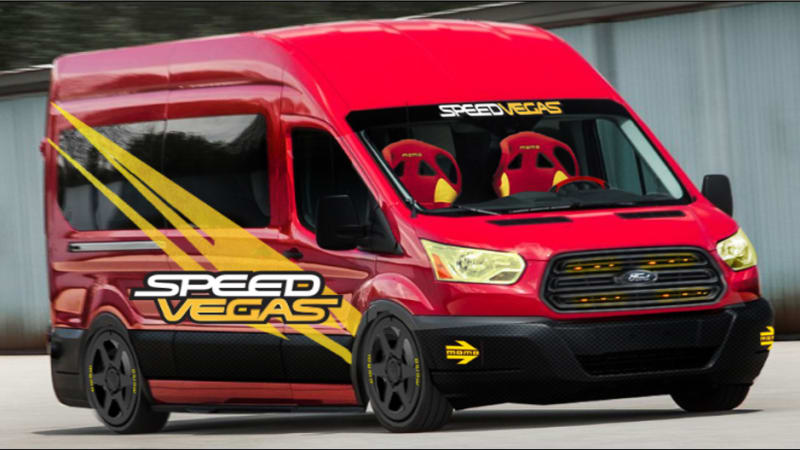 Now we enter into Transit Van land, and we do so at speed. Not many folks are asking for a high-roof, high-performance Transit Van, but SpeedVegas built one. Their van is lowered by 5 inches in front and rear. It has Momo summer performance tires, upgraded Brembo brakes and high-bolstered Momo seats for all the folks holding on around the Las Vegas racetrack this Transit Van drives on. 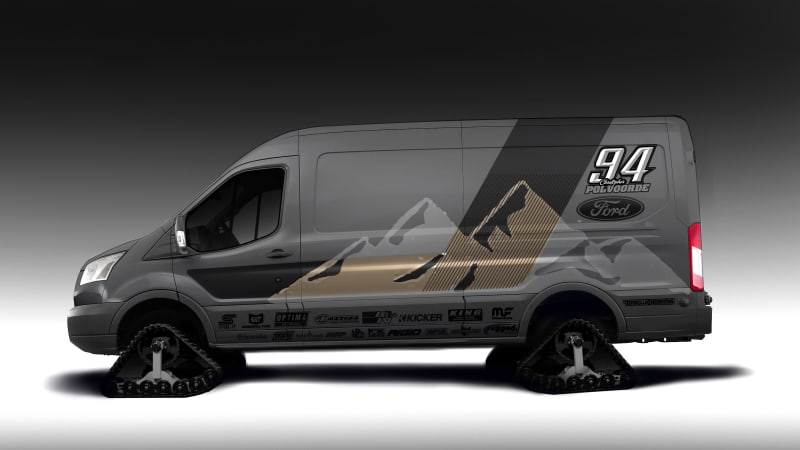 The last Ford SEMA build we have for you today is this Transit Van on tracks. It functions as a motorhome, garage and hangout area when it’s not crawling over some nutty terrain. Up to four people can feasibly live in the van. It has a special solar-powered heating and air conditioning system to accommodate that — hook it up to a water source, and you have running water, as well.