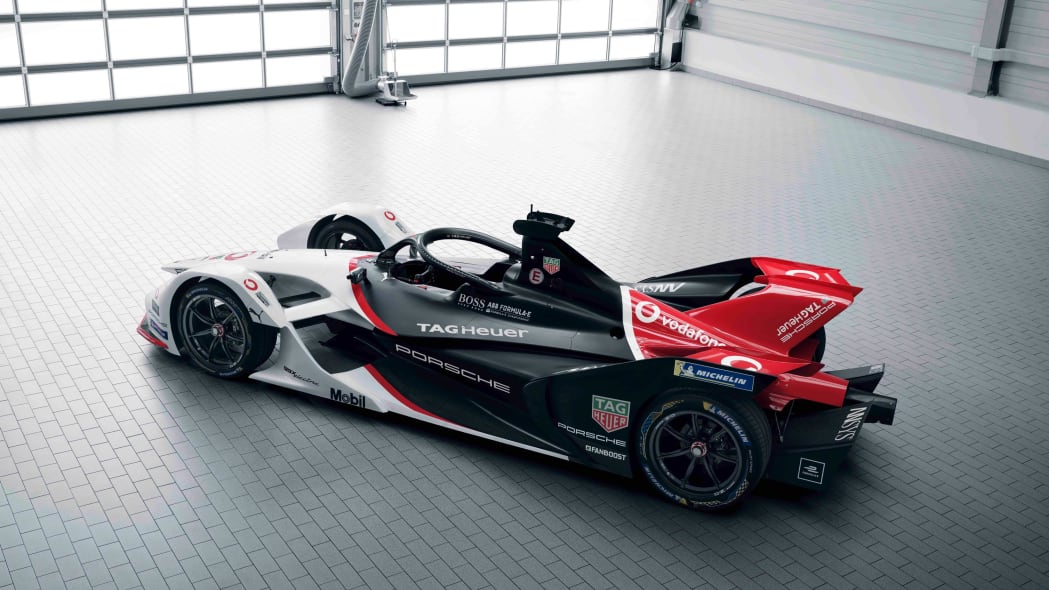 Two years after Porsche left Le Mans racing to focus on Formula E, the carmaker's first race car has arrived. The official team name is Tag Heuer Porsche Formula E, the car it will run called the 99X Electric, following Porsche's usual three-number system for competition entries. Explaining the racer's name, the press release said, "The highest number, nine, was used twice, to re-emphasize the importance of the Formula E project for Porsche, while the X stands for the forward-looking approach and prototype racing." Just as lessons learned on the 918 Spyder helped create the 919 Hybrid, and that LMP1 entry helped create the 99X, the 99X will help shape the future of Porsche's hybrid and electric road cars. To make sure Porsche fans don't lose track of the Stuttgart carmaker's first factory open-wheeler since the Porsche IndyCar in the late 1980s, the 99X gets the motorsport division's traditional red, black, and white colors.

With an eye on restraining costs, every Formula E team uses the same Gen II chassis, standardized battery pack, wheels, brakes, tires, and suspension. Regulations limit power output to 335 horsepower in qualifying trim, 278 hp in race trim. Each outfit builds its own powertrain and software, and Porsche says the series' use of 800-volt technology meant the carmaker could pull parts from the production Taycan. Since March, the company has tested its Porsche E-Performance Powertrain reliability at two tracks in Spain, and will carry out one more test focusing on performance and efficiency. The car's public debut will happen when Formula E series group testing opens at Valencia in October.

Porsche hired two ex-factory pilots in Neel Jani and Andre Lotterer, the latter of whom had been driving for Formula E team DS Techeetah the past two years. The sixth season of the championship begins November 22 with a double-header in Riyadh, Saudi Arabia. Audi, BMW, Jaguar, Mahindra, Mercedes-Benz, and Nissan will all be challenging the 99X this season.