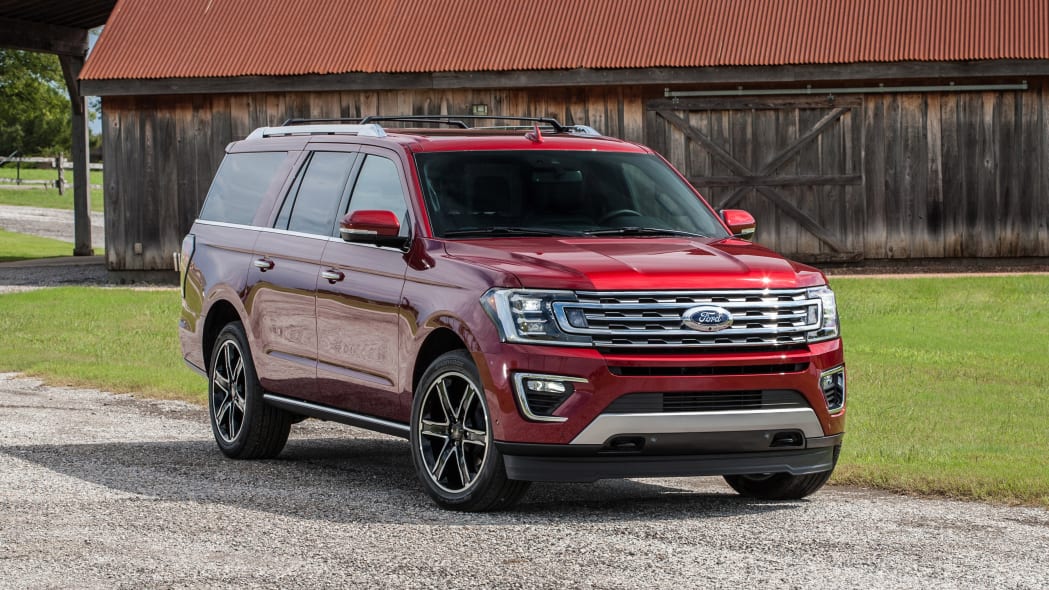 The 2020 Ford Expedition is quite the beast, boasting much of the capability of an F-150 pickup truck but the family-hauling utility expected of a large SUV. In fact, it’s based on the F-150, and also serves as the basis for the Lincoln Navigator. The Expedition was recently updated for the 2018 model year, and is currently in its fourth generation. It comes in two sizes: the standard Expedition as well as the larger, longer-wheelbase Expedition Max, adding even more room to this already capacious ute.

Its size is its biggest strength, and its most obvious compromise. While being the most spacious SUV you can buy means the Expedition is great at hauling cargo or three rows of passengers comfortably, you’re giving up a lot in terms of efficiency and maneuverability. But if you’re shopping this segment, you’ve probably already come to terms with that, and this Ford is the segment's strongest entry.

Beyond its interior space advantage, its turbocharged V6 is the right engine for the job, whether you choose rear- or four-wheel drive configuration. The Expedition is actually not bad to drive — good, even, for the segment — and it won’t punish your passengers, either. The Tahoe and Suburban from Chevy are its fiercest competitors, but have serious interior and ride compromises due to their truck-like rear suspensions. As such, we feel confident in declaring the Expedition the king of the segment.

For 2020, every Expedition now comes standard with the Ford Co-Pilot360 suite of accident avoidance tech. The base price has, accordingly, gone up by $680. There's also a new King Ranch trim level that mirrors the version available on the F-150. Special ranch-inspired design elements includes gray bumper trim outside and "Del Rio" leather inside with King Ranch emblems. For a different aesthetic at a lower price point, there's a new Black Accent package available on the lower XLT trim level.

The interior depends, of course, on trim level, but overall we like what Ford has done here. There are hard plastics in a lot of places, but they don’t dominate the interior landscape, and there are nice materials available. The design is shared with the F-150, meaning its blocky and truck-ish, but there are enough differing surfaces and shapes to keep things interesting (especially on luxurious upper trim levels like the new King Ranch). The seating is spacious and comfortable for long drives.

The Expedition comes standard with Ford’s SYNC 3 infotainment system, which is one of the easier systems to use. It comes with a standard 8-inch touchscreen, which responds well to inputs and swipe gestures. Navigation is available, but annoyingly gets locked out when you're utilizing the standard Apple CarPlay or Android Auto. Besides that, both systems work well with Sync. The Expedition comes standard with four USB ports, which actually isn't that many for a three-row vehicle. Also available are wireless phone charging and a 4G LTE wi-fi hotspot that can connect up to 10 devices. Rear passengers can enjoy an optional dual-headrest rear-seat entertainment system that includes the ability to stream from a device or a home cable account. 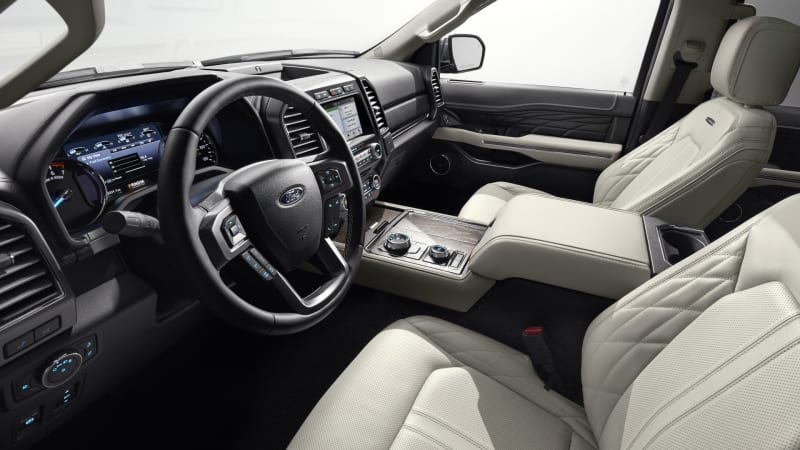 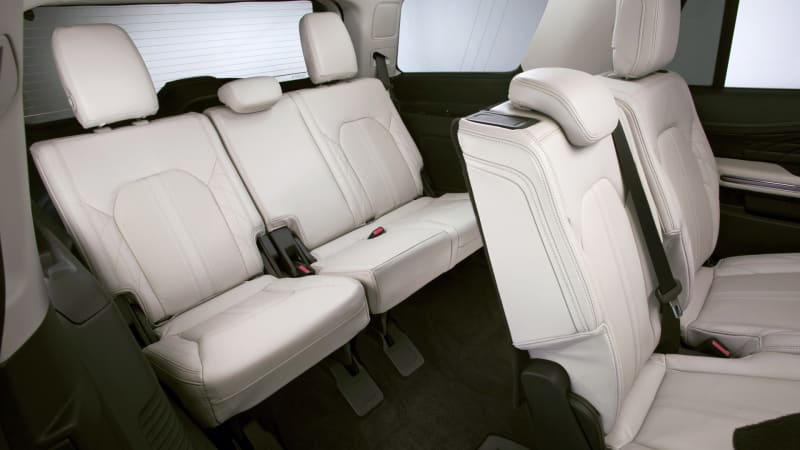 Inside, the Expedition's passenger space and comfort approach minivan territory. Even tall adults will fit perfectly well in the third row, whereas kids will struggle to squeeze into the surprisingly cramped Chevy Tahoe's third row. The Suburban is only slightly better since it gains a few extra inches of legroom. The Chevy siblings do win more cargo comparisons apart from space behind the third row, where the regular Expedition aces the Tahoe. It's important to note that the Expedition has a lower lift-in height (even if it's still quite high), and in general is the more versatile vehicle. As just one example of the Expedition's usability, we were able to fit a small chicken coop in the back of the standard Expedition while leaving one of the second-row seats up for a child in a car seat.

Besides being super useful for moving large items, the Expedition's size gives it a commanding view of the road. However, it also makes it cumbersome to navigate narrow city streets. We found ourselves parking further away from our destination in parking lots, or trying to park next to smaller vehicles. To be fair to the rest of the segment, anything this large is going to sacrifice maneuverability. That’s simply the price you pay for having an SUV bigger than some college dorm rooms.

What are the Expedition's performance and fuel economy?

There’s only one powertrain option in the Expedition, but it’s a good one. Ford’s EcoBoost 3.5-liter turbocharged V6 provides a useful 375 horsepower and 470 pound-feet of torque, except in the Platinum trim, where it makes 400 horsepower and 480 pound-feet. In both the Expedition and Expedition Max, it’s mated to a 10-speed automatic transmission. It can be had in either rear- or four-wheel drive. 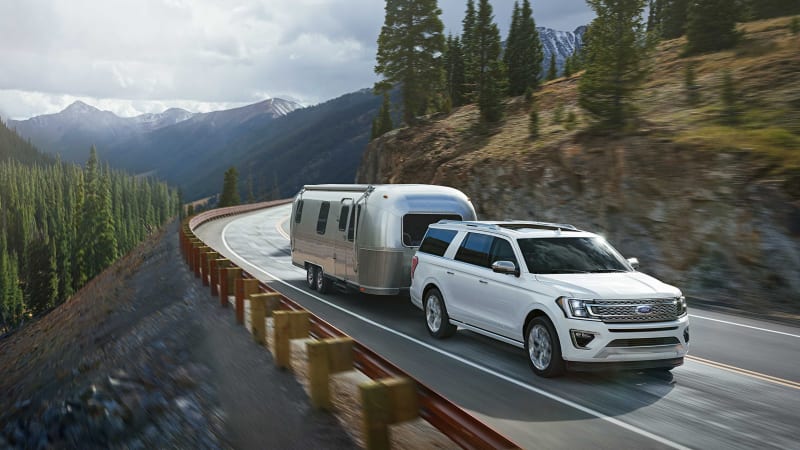 The highest praise we can give the Expedition is that it drives smaller than it is. Which is amazing, because it's immense. The latest generation's lighter aluminum body means there's less mass knocking the suspension around. On canyon roads, the Expedition hustles without falling on its face. It's almost fun, even, to find a rhythm in a beast like this, slowly increasing the pace to just beyond the point of incredulity without breaking the spell. You can definitely corner faster than your passengers or cargo will appreciate. Bottom line: the Expedition is less overtly truck-like than its competitors.

The turbocharged engine is also a real peach. There's torque everywhere, very little lag, and doesn't possess the uncouth truckish roar of its competitors' V8 engines. The 400-hp Platinum version is even stronger. In total, the Expedition's engine represents a key reason to consider it, especially if you're comparing the Max to the Chevy Suburban, which produces only 355 hp and 383 lb-ft of torque from its 5.3-liter V8. We also like the Expedition's 10-speed automatic, which always seems to know the right gear to choose for the situation.

What more can I read about the Expedition?

This is our first drive for the current-generation Expedition. The 2020 model has changed little from the 2018 version in this review and our impressions remain broadly similar. This is an editors’ roundtable review of the new Expedition when we had it at our office for a week. 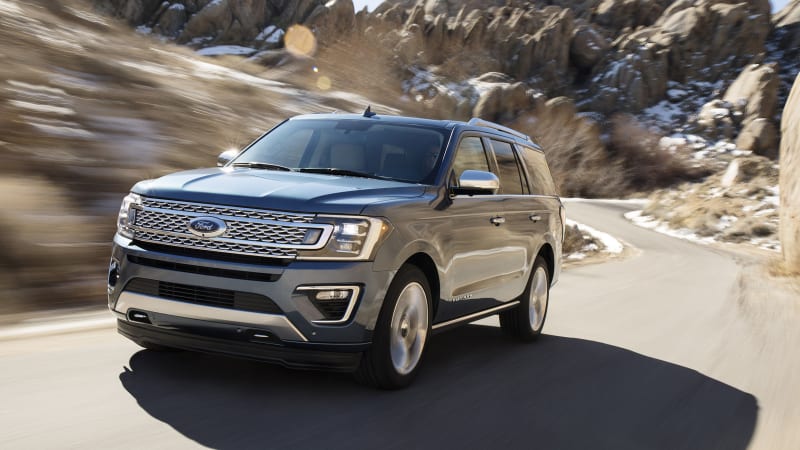 2018 Ford Expedition vs other big SUVs: How it compares on paper

This is a spec comparison between the Ford Expedition, Chevy Tahoe, Toyota Sequoia and Nissan Armada. 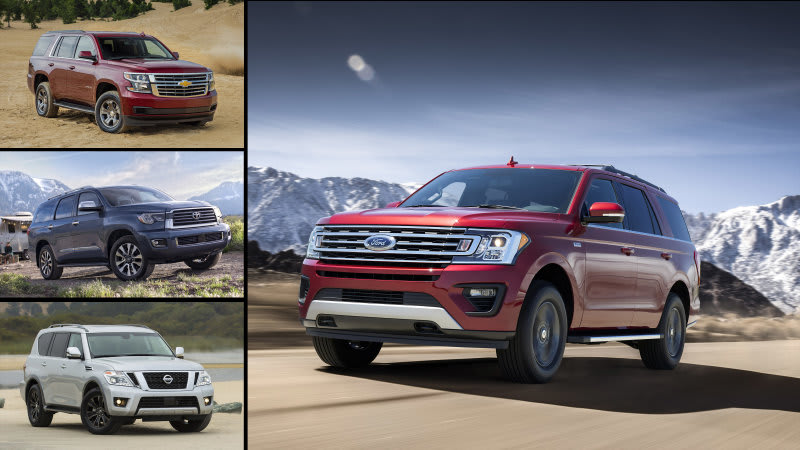 What features are available on the Expedition and what's the price?

To see what extra features come on the Limited, King Ranch and Platinum trim levels, check out this breakdown of features, pricing and specs here on Autoblog.

All prices below are with rear-wheel drive and include the $1,395 destination charge. The 4x4 versions add $3,010.

What are the Expedition's safety equipment and crash ratings? 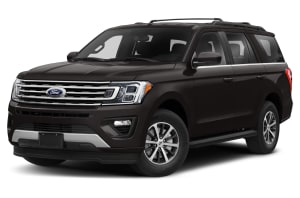