NASHVILLE, Tenn. — It’s been said that you only get one chance to make a good first impression. That’s just as true in the automotive world, and it’s especially applicable to entry-level luxury vehicles like the 2019 Audi Q3. The automaker’s internal data says that more than two-thirds of all customers who drive a Q3 off the lot will be making their first purchase from a premium brand like Audi. So if Audi has any hope of retaining that customer and hopefully moving them upward in its hierarchy of vehicular offerings, the Q3’s first impression had better be a good one.

We’re happy to report that the new Q3 is a vast improvement over the model it replaces. As we found out when we got an early chance to test out the European version of the new Q3, for 2019 Audi’s entry-level crossover gets bigger, more attractive, more powerful, and boasts more standard features than before. On paper it’s a major upgrade, and the good news is that most of those spec-sheet upgrades translate into real benefits in the real world.

The 2019 Q3 now rides atop the Volkswagen Group’s ubiquitous MQB platform, but that doesn’t mean it rides and drives like a pumped-up VW Golf. The Q3 gets specific tuning for the United States, but still boasts the kind of firm-but-comfortable ride, quiet composure and responsive handling that suits the four-ringed badge it wears inside its oversize eight-sided "Singleframe" grille. Its bodyside bulges with blistered fenders that ape the look of the much larger and more expensive Q8 and are meant to pay homage to the world-conquering Quattro racing cars of the 1980s. 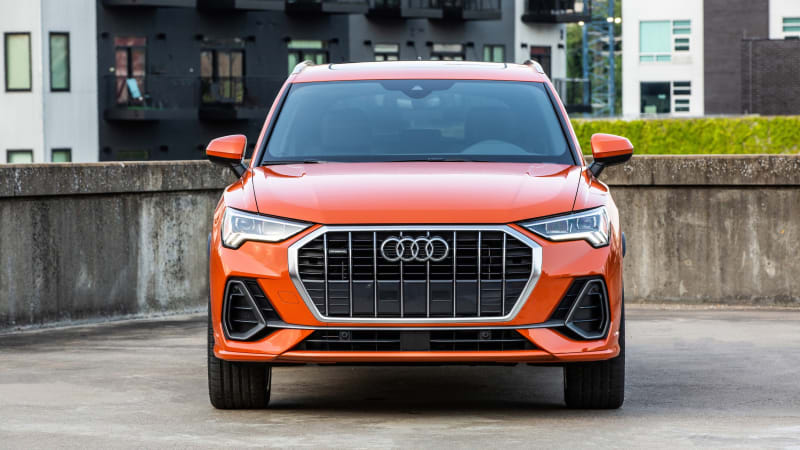 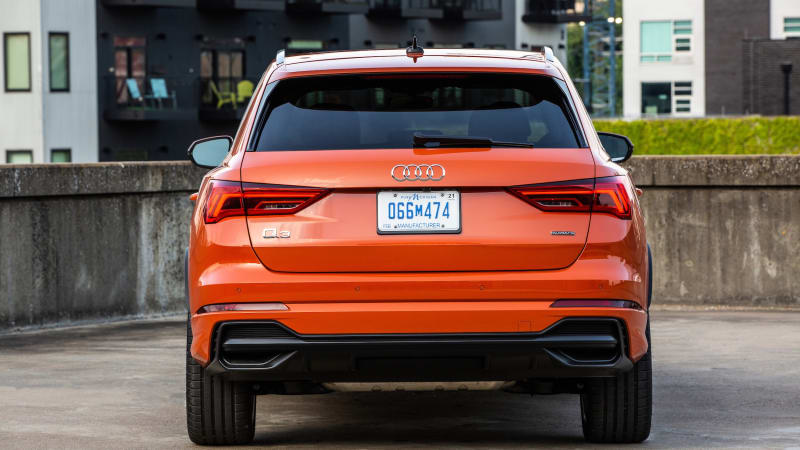 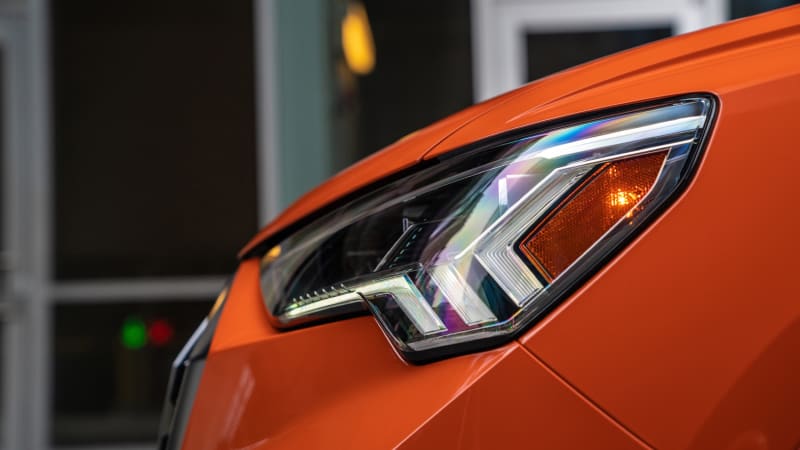 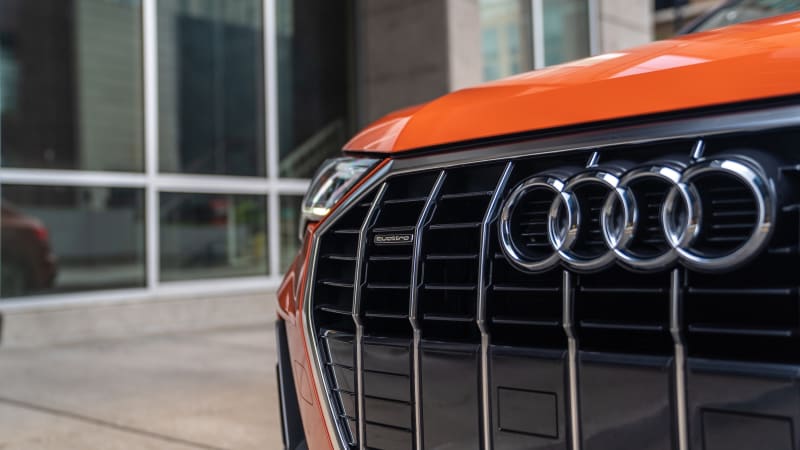 Our test car wore optional S line exterior upgrades that improve the Q3's appearance, especially the geometrical elements in the lower fascia that bracket the Q3’s grille. The S line also gets 19-inch wheels that replace the base car’s 18-inch package. A 20-inch wheel package is optional.

Also optional on the S line is a Sport interior package, another desirable upgrade. Sport seats and shift paddles on the steering wheel are worthwhile additions, and matte aluminum trim fits the car’s sense of style. An optional Alcantara Orange package adds — you guessed it — orange Alcantara surfaces to the dash and door panels for $150. We think maybe that package should be offered in a few more palettes, but again, the bright hue suits the Q3’s youthful target demographic.

Power is up 28 horsepower and 51 pound-feet of torque for 2019, to a total of 228 hp and 258 lb-ft. Coupled to an eight-speed automatic transmission — European Q3s are equipped with a seven-speed dual-clutch gearbox that won’t be offered in the States — the 2019 Q3 accelerates from 0-60 in 7.0 seconds. That represents a marked improvement over the previous car, which was 1.2 seconds slower to 60. But it’s still a few tenths behind the 6.3-second run of the BMW X1 and X2 xDrive28i siblings, which exactly match the Q3's power and torque figures but weigh about 200 lbs less similarly equipped. All-wheel drive comes standard on the 2019 Q3 — a nice touch that is a $2,000 option on the BMW X1 and Mercedes-Benz GLA.

The EPA says the 2019 Q3 will return 19 miles per gallon in the city, 27 on the highway and 22 combined. That’s actually down by one mpg across the board compared to the 2018 Q3. It’s also well below the 22/31/25 of the all-wheel-drive BMW X1 and the 23/31/26 of the Mercedes-Benz GLA250 4Matic and Volvo XC40 AWD. On the positive side, the Audi only requires regular gasoline while its European competitors require premium. 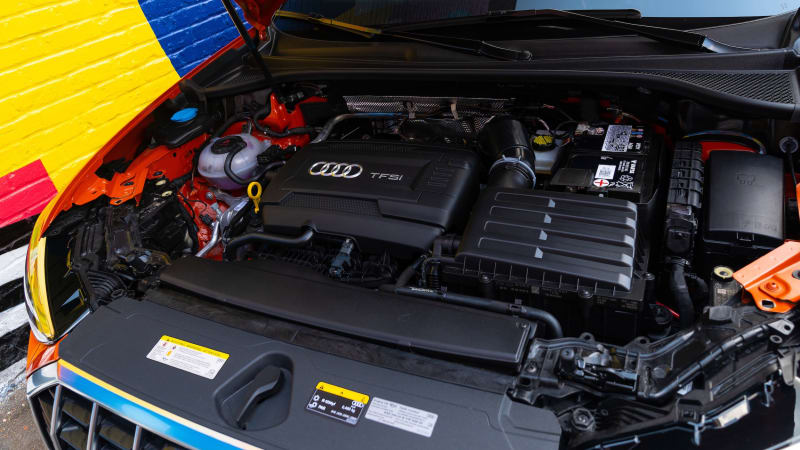 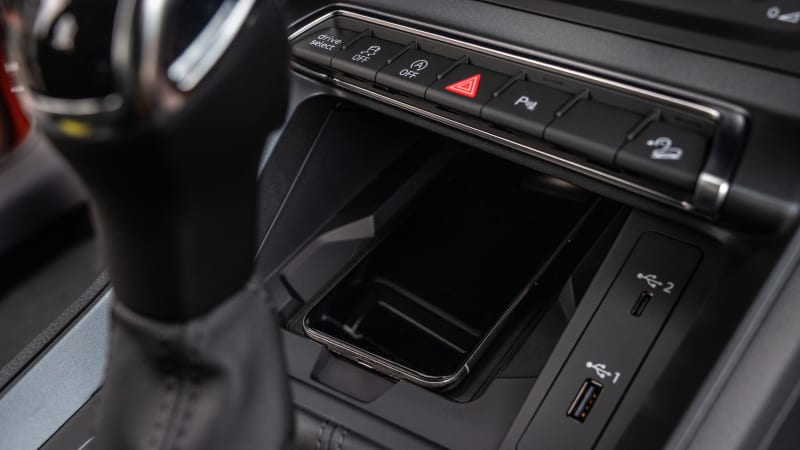 Like a lot of the current crop of downsized turbocharged four-cylinder engines, the 2019 Q3’s four-pot feels refined from inside the cabin at idle and at steady speeds, but a bit agricultural from the outside. At full throttle, the Q3 happily fires through its eight gears and feels good as it builds power after a reasonably short period of lag. In less aggressive commuting, though, we struggled to drive smoothly.

It’s hard to know exactly where to place blame — a transmission that’s too eager to find the next gear and a gas pedal that’s difficult to modulate as the engine builds boost are likely culprits — but we found ourselves concentrating harder than normal to keep heads from bobbing inside the cabin as we accelerated under typical part-throttle driving situations, especially in Dynamic mode. In our first drive of the European Q3 we commented on its “negligible turbo lag,” so perhaps the traditional torque converter-equipped eight-speed automatic’s tuning is mainly to blame for the slight off-idle sluggishness. We found the herky jerky effect was less pronounced in Comfort mode, so we left it there most of the time.

Switching between Dynamic and Comfort has no bearing on the suspension. There are steel springs at all four corners, no optional sport suspension packages. There are no adaptive dampers – something we bemoan, and yet, we acknowledge that Audi’s probably right that the car’s target audience won’t miss them. The Q3 isn’t pretending to be something it isn’t (a sports car), and the standard setup is appropriately tuned. It doesn't wallow and never feels floaty. We wish Audi would change its mind about bringing over a hotter RS-badged Q3, but company officials tells us it’s not going to happen. We’re also not getting the more rakish Q3 Sportback in the States.

Even if it’s not particularly sporty, the 2019 Q3 is at least practical. There’s a lot more space inside the new version than the old, made possible by a wheelbase that’s been stretched an additional 3.0 inches. The new Q3 is also 0.7 inches wider than before, half an inch taller, and 3.8 inches longer. Add it all up and there’s an extra two cubic feet of space inside to play with for a total of 23.7 with the seatbacks up and 48.0 with them down. A split 40/20/40 rear seat that slides 5.9 inches fore and aft plus a two-level adjustable load floor in the cargo area adds even more newfound utility. 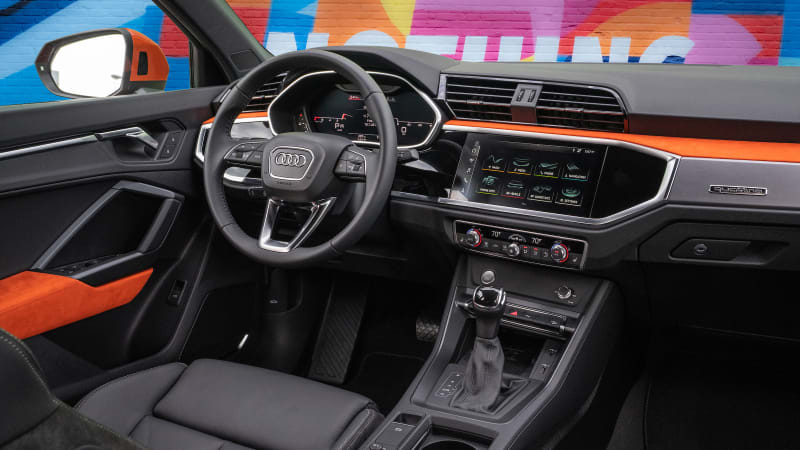 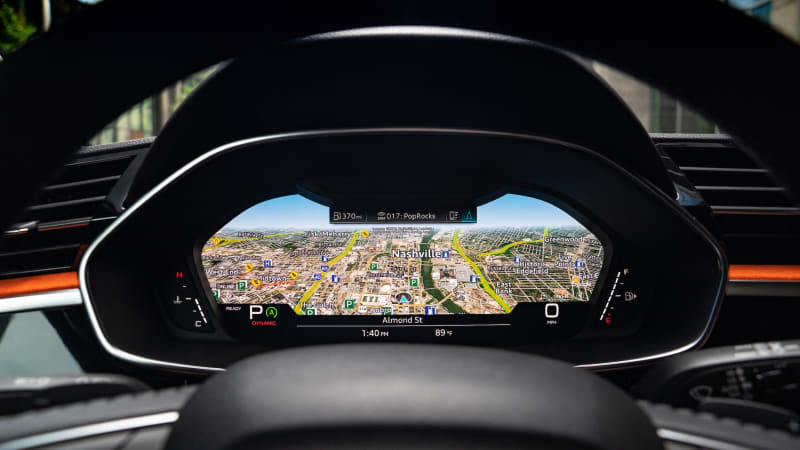 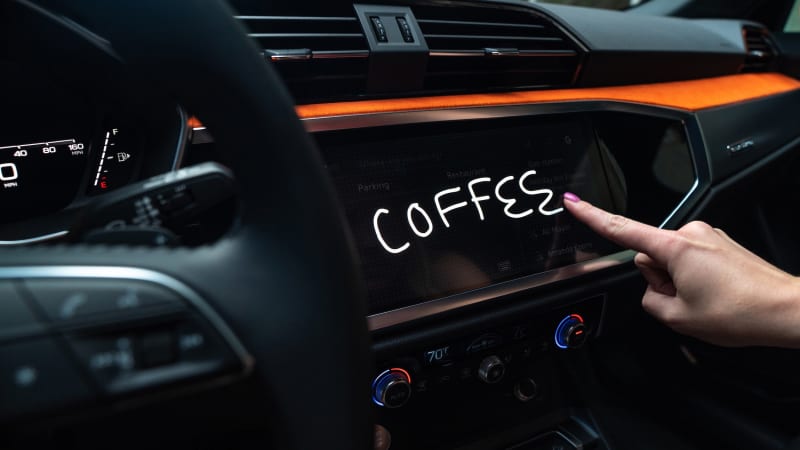 The boost in interior space is welcome. The Q3 is now about on par with stylish rivals like the BMW X2 and Volvo XC40, coming within fractions of an inch in legroom (40 inches in the front and 36.1 in the rear), headroom (39.6 front, 36.3 rear) and shoulder room (56.7 front, 55.1 rear) to the BMW. It’s a bit smaller, though, than the more practical though admittedly more plainly styled BMW X1 — that little ‘ute boasts greater leg, shoulder and headroom than both the slinkier Q3 and its more expensive X2 sibling, and it offers an impressive 10.7 extra cubic feet of maximum cargo capacity.

Audi has packed the interior of the Q3 with loads of technology, including a standard digital instrument cluster measuring 10.25 inches. A secondary 8.8-inch touchscreen featuring Audi’s MMI touch response system is also standard. The optional 12.3-inch virtual cockpit adds a lot more wow factor, as does the optional 10.1-inch upgrade for the screen in the center of the dash that includes handwriting recognition and navigation. Either way, Apple CarPlay and Android Auto come standard. For greater smartphone utility, a phone box package that provides wireless charging and a signal boost through the car’s integrated antenna is optional.

In addition to the dual interior screens mentioned above, the $35,695 2019 Audi Q3 Quattro Premium (that’s the base trim level, and all prices include $995 for destination) includes such features as leather upholstery, heated front seats, and a panoramic sunroof. A fully loaded 2019 Q3 nets out at $43,895. In an odd safety omission, rear side airbags are a standalone $350 option across the board; they should be standard equipment. Lane departure warning and rear cross traffic alert are also optional on the base Premium trim and standard on the Premium Plus and Prestige.

To put those prices in perspective, the 2019 BMW X1 xDrive28i, which as we’ve seen throughout this review is an obvious bogey for the Q3, starts at $37,945. The all-wheel-drive X2, which is more similarly sized to the Q3, starts at $39,395. Even the BMW X2’s starting price with front-wheel drive of $37,395 is higher than the base Q3 Quattro. At the top end and even without adding BMW’s M Sport package, both the X1 and X2 are several thousand dollars spendier when loaded up with options than the Q3 Prestige. 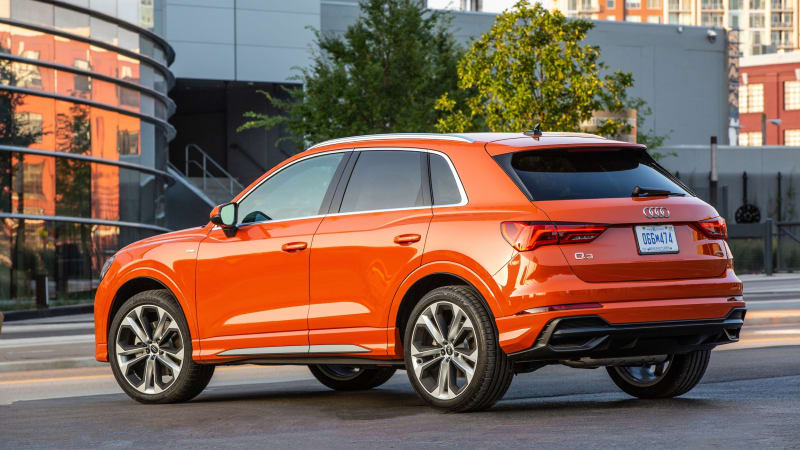 The 2019 Audi Q3 offers a blend of stylish good looks, lots of fancy technology, and a reasonable asking price. That’s a combination of factors that are destined to draw in lots of buyers. We didn’t really get along with its powertrain tuning and wish it was just a tad bit larger to compete head-on with the BMW X1 instead of the X2, but those niggles aren’t likely to dissuade too many buyers from giving the redesigned Audi Q3 a close look.

Perhaps most importantly, the Q3 is a whole heck of a lot better than the dated model it replaces. It makes a very good first impression and isn’t likely to disappoint even after a few years, and that means buyers who have outgrown the Q3 will be more likely to upgrade to a Q5 and stay in the Audi family. 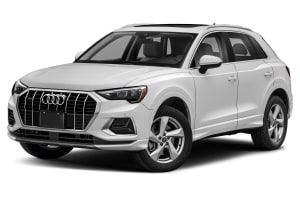