Redesigned for 2019, the Acura RDX drives well, has stylish good looks, and is packed full of technology — though opinions are divided on its infotainment system. Above all else, it's an excellent value. A fully loaded RDX costs as much as $10,000 less than its German peers.

The 2020 Acura RDX is a bold compact luxury crossover that represents a return to its roots – providing some athleticism and adrenaline to a segment not known for either. We think this is a positive development, as the previous RDX lost its way a bit.

However, that last RDX’s biggest strength was its very spacious interior for its overall size, which carries over to the new version despite the increased athleticism. These aren’t usually attributes that go together; sporty vehicles can be smaller, with poor space utilization. That isn’t the case here. The turbocharged engine and advanced all-wheel drive system mean the RDX is as lively as any crossover buyer could want. The bottom line is that it has more character and a superior combination of attributes than many of its sport-luxury competitors.

The RDX carries over mostly unchanged for 2020 after receiving a complete redesign last year.

There’s a turbocharged engine under the hood again, instead of the V6 in the last-generation model, and the technologically-advanced Super-Handling All-Wheel Drive system also makes a return. On the outside, the chrome grille “beak” has thankfully vanished, and there’s some nifty tech in the slick interior – although its signature touchpad infotainment controller is a mixed bag. More on that below.

You can read about last year's changes more fully in our 2019 Acura RDX First Drive, but in short, it's sportier, more distinctive and more luxurious than its predecessor. Part of that is the fact it's no longer based on the same vehicle platform as Honda's CR-V.

The RDX’s interior is a nice place to be. In the upscale A-Spec trim we tested, most surfaces are covered with soft, premium-looking materials, including perforated leather, soft-touch plastics, and classy-looking vinyl.

The RDX introduces Acura’s True Touchpad Interface, which controls the infotainment system and its 10.2-inch screen with a center-console-mounted touchpad rather than a touchscreen interface. While it’s certainly a step in the right direction, the system has a relatively steep learning curve and lacks any haptic feedback. It’s ultimately not as intuitive as we’d like, and that is important because it’s an interface you’ll be using all the time in an RDX – including to interface with the standard Apple CarPlay functionality. Note that, as of this writing, Android Auto is not supported. Acura promises to roll this feature out in an update for all TTI-equipped RDXs soon. You can read our full impressions of the system here.

Other than the TTI system, the RDX has an excellent sound system courtesy of the ELS Studio-branded system offered with the $3,200 Technology Package (or bundled in the A-Spec package). A head-up display, heated and ventilated seats, and fancy trim (“Natural Olive Ash Burl Wood”) is available on the $4,900 Advance Package, which requires the Technology Package. The bottom line here is that if you want the fancier stuff inside, it’s not going to be cheap.

If you're looking for the most spacious "compact" luxury SUV for either passengers or cargo, the 2020 RDX is pretty great place to start. On paper, the RDX has the most rear legroom in the segment, and when we compared it back-to-back with a variety of competitors, that proved to be absolutely correct. Unless you're pushing for playing time on an NBA team, your knees won't be touching the front seats. Importantly, a rear-facing child seat is also more likely to fit back there.

Cargo space is similarly excellent with 29.5 cubic-feet of space behind its raised back seat. That's better than everything in the segment except the Volvo XC60, which is basically equal. It also provides something most others don’t: a sizeable and genuinely useful under-floor storage area. Better still, it was achieved without losing the spare tire – no run flats or cans of tire goo here. Maximum cargo space numbers also best-in-class.

All of that said, the RDX's exterior dimensions don’t dwarf those of its competitors. Yes, they're typically bigger, but only by 1 to 3 inches – nothing that would make parking or fitting in your garage extra-difficult. 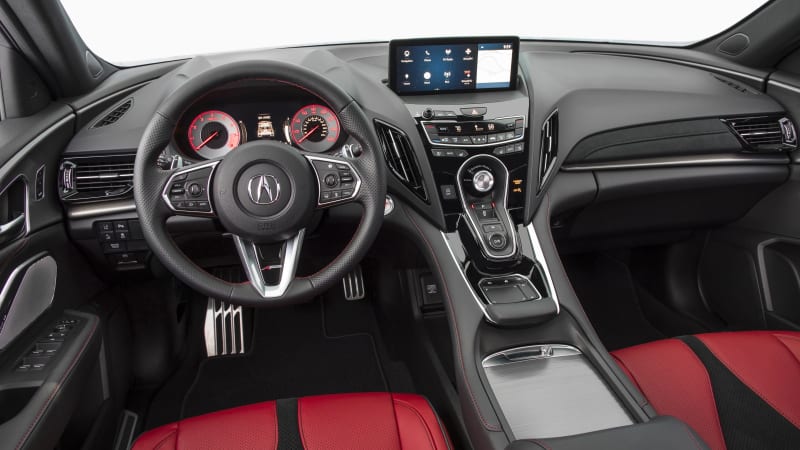 The RDX’s only engine is a 2.0-liter, turbocharged inline-four that makes 272 horsepower and 280 pound-feet of torque – that’s a healthy bump in torque from the previous V6, and it offers more of that power lower in the RPM range.

The front-drive RDX is rated at 22 mpg city, 28 mpg highway, and 24 mpg combined MPG. Adding all-wheel drive drops those figures by 1 mpg across the board. The A-Spec is rated at 1 mpg less on the highway, probably due to its larger wheels, but the city and combined ratings are the same. Overall, the economy is similar to the Audi Q5 but slightly less than the BMW X3 sDrive30i.

The RDX manages a happy balance between reasonable sportiness for the segment and overall comfort. There’s a bit of adrenaline in the thing – a growl from the engine as it thrusts the RDX forward on a wave of torque. Acura’s parent company, Honda, knows how to make an entertaining engine. The RDX exudes an air of sportiness, but also backs it up with real athleticism. The optional SH-AWD system’s advanced torque vectoring is also a boon on dry pavement, making the RDX turn crisply – and it’ll also help, to some degree, with traction in poor weather. We think it’s a return to form for a vehicle that built its reputation on providing a sharper driving experience than your average crossover.

The engine’s extensive low-end torque means that it’s zippier around town. It channels power through a 10-speed automatic transmission, which is mostly competent but occasionally gets confused. On several occasions during a drive in our A-Spec tester, a swift stab of the accelerator to pass another vehicle led to a distressing delay before the RDX figured out what gear to be in. We’ve had similar issues with nine- and 10-speed automatics in the past, but it’s disconcerting. Other than that, the engine and transmission work together fairly well – and the RDX feels awfully quick, especially in sportier drive modes.

There are two suspension options for the RDX. The Advance trim receives an Adaptive Damper System, but everything else is relegated to a passive Amplitude Reactive Damper system. The non-electronic dampers work well – the ride is firm but not uncomfortable, and the RDX corners with precision. It’s helped by decent steering feel from the variable-ratio rack, although it’s on the light side at low speeds.

Note that the A-Spec package sounds like it might be a performance upgrade, but it is (disappointingly) a purely cosmetic package.

Where can I read more about the Acura RDX?

We get back-to-back driving impressions of the RDX versus the Audi Q5, BMW X3, Mercedes GLC300 and Volvo XC60. 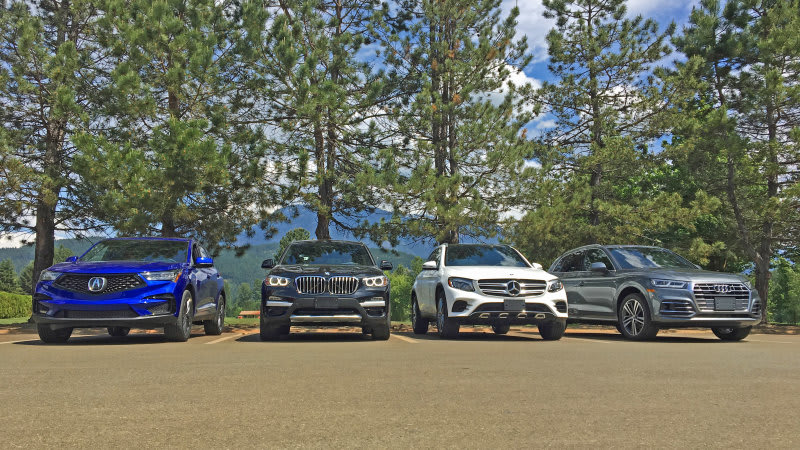 In our first drive of the new 2019 Acura RDX, Consumer Editor Jeremy Korzeniewski finds it to be more like a rebirth of the original, sporty RDX than its more mainstream successor. This article features a more in-depth look at its engineering, design and how it differs from its predecessor. 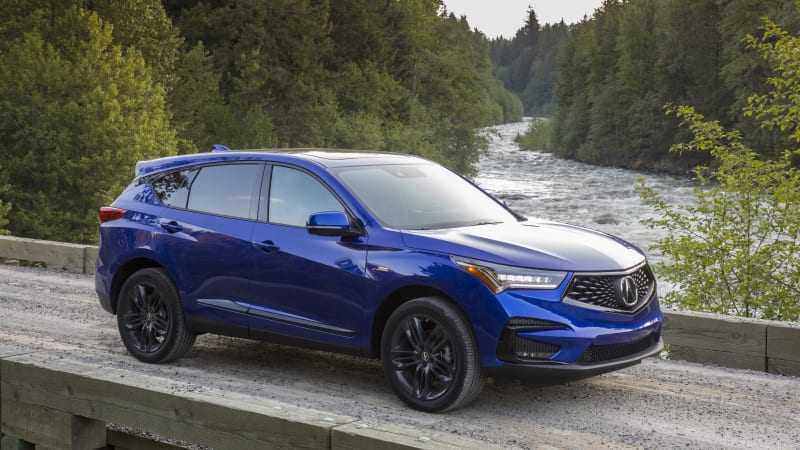 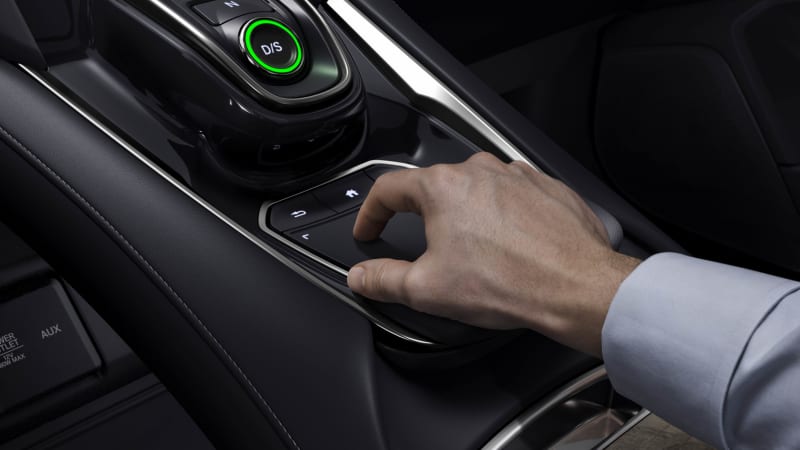 The RDX comes in several different flavors – we treat them like trim levels, but Acura calls them packages since you can stack the Technology Package with the A-Spec or Advance Packages. Or you can select the Technology Package by itself. It’s a little bit confusing, but each package adds more equipment, just like a higher trim level, so in the end it’s all just semantics.

The base price of a front-wheel drive RDX is $38,595, and it comes reasonable well-equipped, with LED headlights, power heated front seats, and the True Touchpad Interface, and more. SH-AWD adds $2,000 to the price.

The pricing for the various packages is as follows:

While it’s a bit subjective, we think the appearance-only A-Spec package is a poor value. It offers some nicer interior materials, but the “dark chrome” exterior details aren’t terribly special. The red-on-silver gauge cluster is, however, really neat. That said, for a “sporty” trim level, we think the lack of available adaptive dampers on the A-Spec (they're exclusive to the Advance Package) is a bit of an oversight. The Advance Package, despite being more expensive, may be a better value in that in provides both nicer interior materials and a functional upgrade. It also has 19-inch rather than 20-inch wheels, which improves the ride over rough pavement that much more.

You can see a complete breakdown of 2020 Acura RDX features, specs and local pricing here on Autoblog.

What are the safety features and crash ratings?

The RDX is an IIHS Top Safety Pick+, the organization’s highest rating, meaning it got the best-possible crash ratings plus top marks for its standard AcuraWatch safety tech and the Advance Package's optional curve-adaptive headlights.

NHTSA gave the 2019 RDX an overall rating of five stars, its highest rating. It received only four stars in frontal crash and rollover tests, but full marks in side impact. As the 2020 model is identical, the 2019 safety ratings apply. 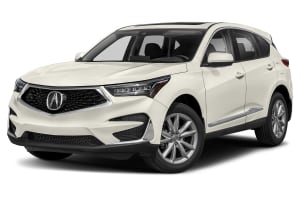 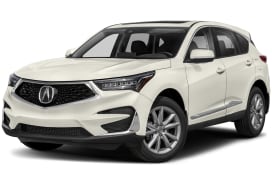 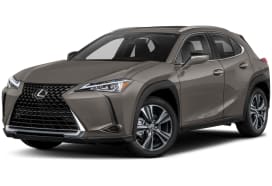 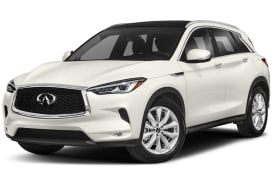