Dennis House, self-proclaimed car buff and Connecticut news anchor, thinks that with the impending launch of the Jeep Grand Wagoneer, woodies will make their grand return to the car scene in modern fashion. House wanted to get ahead of the potential trend and decided to create a one-of-one woody wrap for his Buick Enclave.

On the rear quarter panel of the custom SUV, an aftermarket badge reads "Enclave Estate Wagon." It's a direct call back to one of the vehicles that has inspired House's love of wood-paneled family haulers, the Buick Roadmaster Estate Wagon. House owns two Roadmasters, a black 1996 model and a 1995 woody. In making room for the Enclave, House has decided to sell the '96, which looks spotless and only has a bit more than 71,000 miles on the clock.

According to GM Authority, who spotted House's Enclave, the look was achieved with a vinyl wrap. After exploring the idea of a first-gen Enclave woody or a Regal TourX woody, House decided the application worked best on a current Enclave. The mock-ups were done on the computer, and Scranton Cadillac Buick GMC completed the work. The wrap starts just beneath the headlights and wraps around the entire vehicle. Furthering the theme, House took a photo of the woody with a surfboard.

For now, the woody look is not a factory option, but House hopes General Motors takes notice and considers offering the choice on future models. If not, just take your ride to Scranton Motors, and they could probably help you out.

A post shared by Scranton Cadillac/Buick/GMC (@scranton_cadillacbuickgmc) on Apr 19, 2019 at 10:18am PDT 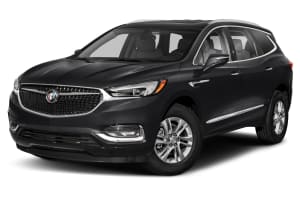