And in that silence, this car spoke to us.

ATLANTA, Ga. — The 2018 Enclave is part of Buick's effort to reinvigorate its brand, positioning itself as a maker of "attainable luxury" vehicles. That means a total redesign, a number of safety and technology upgrades, and the introduction of the Avenir sub-brand (think of that last one as sort of the Denali of Buick). It also means more space and more luxury. With this in mind, we traveled to Atlanta to get to know the new Enclave, both in the city and on a long drive through the Blue Ridge Mountains into North Carolina.

Our first impressions of the new Enclave came not from the driver's seat, but from a captain's chair in the second row (which is the traditional seating arrangement for a true captain, of course). We were riding from the Atlanta airport to a studio to learn more about the vehicle. That very first impression was, "Wow, this interior is really nice." The leather upon which we sat was soft, smooth to the touch, and interesting in its shapeliness. Looking around the cabin, we saw a lot of gentle curves and thoughtful accents that made the inside of the Enclave feel downright premium. It was a fresh and airy sense of taste though, and definitely not the seasoned wood-and-whiskey stodginess one might expect from the Buick name.

Our second impression: "Boy, it's quiet in here." Heading toward downtown Atlanta on the freeway, we were unable to pick up wind noise, and only just a smidge of road noise as the Enclave trundled over the occasional rough patch of pavement. This is, of course, completely intentional on the part of Buick. The windshield and front windows use acoustic glass. The doors are triple sealed for a tighter, quieter fit when closed. Buick has insulated the Enclave with more sound deadening and included active noise cancellation. "Our goal is to make it as social as possible," said Dean Perelli, chief engineer for the Enclave. And social it is. It is easy to carry on conversation across the Enclave's three roomy rows. 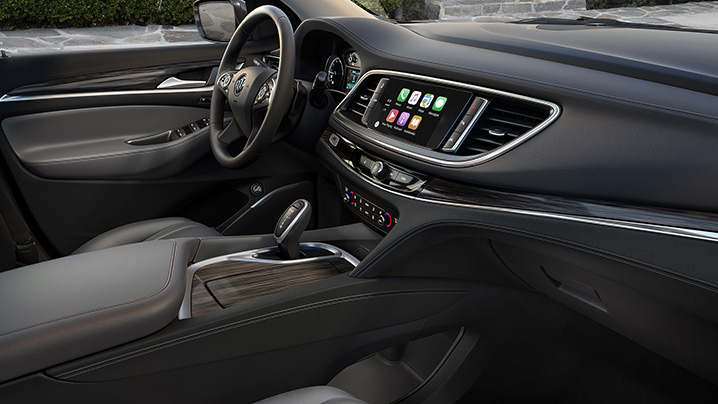 When we got out of the Enclave, we had a chance to take it in from the outside. It features attractive, wing-like lighting front and rear. The front signature lighting uses technology called "Evonik Acrylite," (a mouthful, even for the engineers) which is a polycarbonate material arranged in a dazzling, faceted and delicate array. The paint finishes we saw were attractive, with depth. The Enclave features a floating-style roof that extends into a rear spoiler, and it makes the rear three-quarter view our favorite angle from which to view the car. We really enjoyed the contrast of the painted rear bumper, a classier look than plastic cladding, which would have looked too rough for this refined Enclave. Its large aluminum alloy wheels look sporty, and offer nice finishes as well, our favorite being a just slightly less-than-glossy almost-chrome.

The new Enclave has a wheelbase two inches longer than the previous generation, which translates to more room for third-row passengers. The packaging of the suspension – MacPehrson front and five-link rear – is more compact than previous generations, allowing Buick to take advantage of the added space. The "Magic Slide" second-row captain's chair on the passenger side can kneel forward to allow rear egress even with a child seat strapped on. There's a good amount of room for stuff, too. The floor of the rear cargo area lifts up to reveal a deep well with hooks to keep your groceries in place. The spare tire is located even further below that, thanks to some spatial miracle on the part of Buick.

Before we got behind the wheel, we learned a bit about the air quality system. Not only does the Enclave feature tri-zone automatic climate control, it also has an ionizer for air purification. Located in the ductwork, it produces negative ions that capture finer pollutants and allergens like dust, pollen, smoke, bacteria, viruses and odors, and clumps them together to make them either fall out of the air or become more easily caught in the air filter. If you're someone who suffers from seasonal allergies or lives in a smoggy city, you might appreciate this technology. 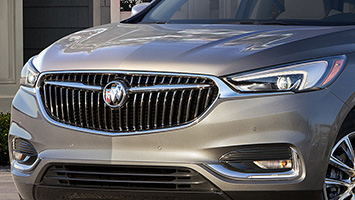 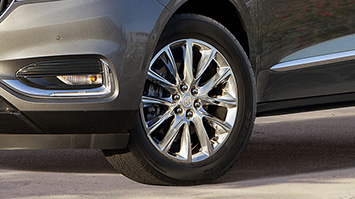 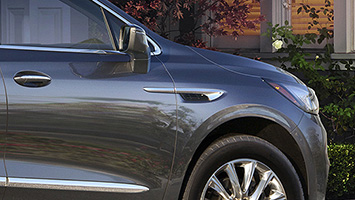 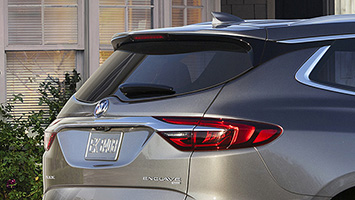 The Enclave is powered by a 3.6-liter V6 producing 310 horsepower and 266 pound feet of torque. That power goes to the wheels via a nine-speed automatic transmission. While it's not underpowered, it's not exactly what we'd call quick, either – 0-60 miles per hour comes in 6.4 seconds in the front-wheel drive version, while the all-wheel drive Enclave makes the same sprint in 7.1 seconds. There's enough get-up to merge at highway speeds on a short onramp. The V6 mostly makes itself unheard, but on the occasions it does pipe up, it produces a pleasant note.

The really impressive thing about this powertrain is its smoothness, and the transmission is truly the highlight of the new Enclave's refined drive experience. This CUV is already quiet, but its buttery shifts make acceleration a completely drama-free activity, and almost CVT-like in its linearity (without the awful droning that often accompanies continuously variable transmissions). While we could hear the shifts happening under full throttle, we couldn't really feel them. We didn't find much value or engagement using the paddles on the back of the steering wheel, and preferred to let this exceptional transmission sort the gears on its own.

The Enclave's ride is just as isolating as the rest of the driving experience. Our car also had the upgraded suspension with continuous damping control. "We tied it down more than other vehicles," Perelli told us ahead of our drive. This all translated to a calm ride up front, with the bumps largely unfelt and body roll quite well managed, even in the hairpin corners on the rural highways of the Blue Ridge Mountains. Sitting in the third row, though, we felt more motion through the suspension, but it was still comfortable through the corners.

Make no mistake about it, though: This is a big vehicle. On Atlanta's city streets, it was difficult to be confident about placing the Enclave in its lane, mostly because the corners of the vehicle are hidden from view. While it might be a little tricky on a tight city street, the Enclave offers a number of features to help ensure safety and make the drive easier. It has a rear-view camera (with a spray nozzle), which displays in the mirror to provide a wider view à la the Cadillac CT6. A 360-degree camera view is extremely helpful when parking. Lane-keep assist is subtle, and helps keep it steady on the highway, where the lines are generally more defined. The adaptive cruise control works well, bringing the car to a full stop. 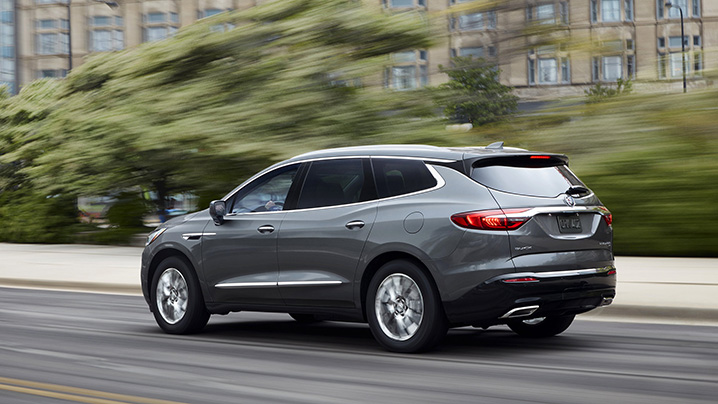 The Enclave is also a connected vehicle. In addition to OnStar, Apple CarPlay and Android Auto, it offers 4G LTE Wi-Fi running on AT&T's cellular service. In all but the most remote parts of our trip through the Blue Ridge Mountains, it worked quite well with a number of people using it simultaneously. There's enough room, even in the third row, to whip out a laptop and work online, assuming you're not prone to motion sickness. Our vehicle also had a couple of USB ports in every row, allowing us to charge a phone from any seat in the vehicle.

For years, Buick was a bit of a punching bag, and while some of the shade tossed its way has been unfair or cliché, much of it was deserved. It's rare for a product from the brand to stir up much emotion either way. Frankly, we were caught off guard by the way the 2018 Enclave — not just a Buick, but a crossover — made us feel, and it has us rethinking the brand. The price tag might still be a deterrent for some buyers, but if you're looking at an Acura MDX or an Infiniti QX60, you ought to take a look at the Enclave, too. You might be just as surprised by it as we were. Furthermore, you might find some GM dealer incentives to sweeten the deal.

Unless it's a fluke, the 2018 Enclave demonstrates a renewed savviness on the part of the brand in terms of technology, design, attention to detail, and that hard-to-quantify but perhaps most important quality, charisma. If this CUV is evidence of the brand's new tack, (and Buick has basically said as much) we won't be as surprised with Buick's success as we were about how much this new Enclave resonates with us. In fact, this new Buick is something we could really get used to. 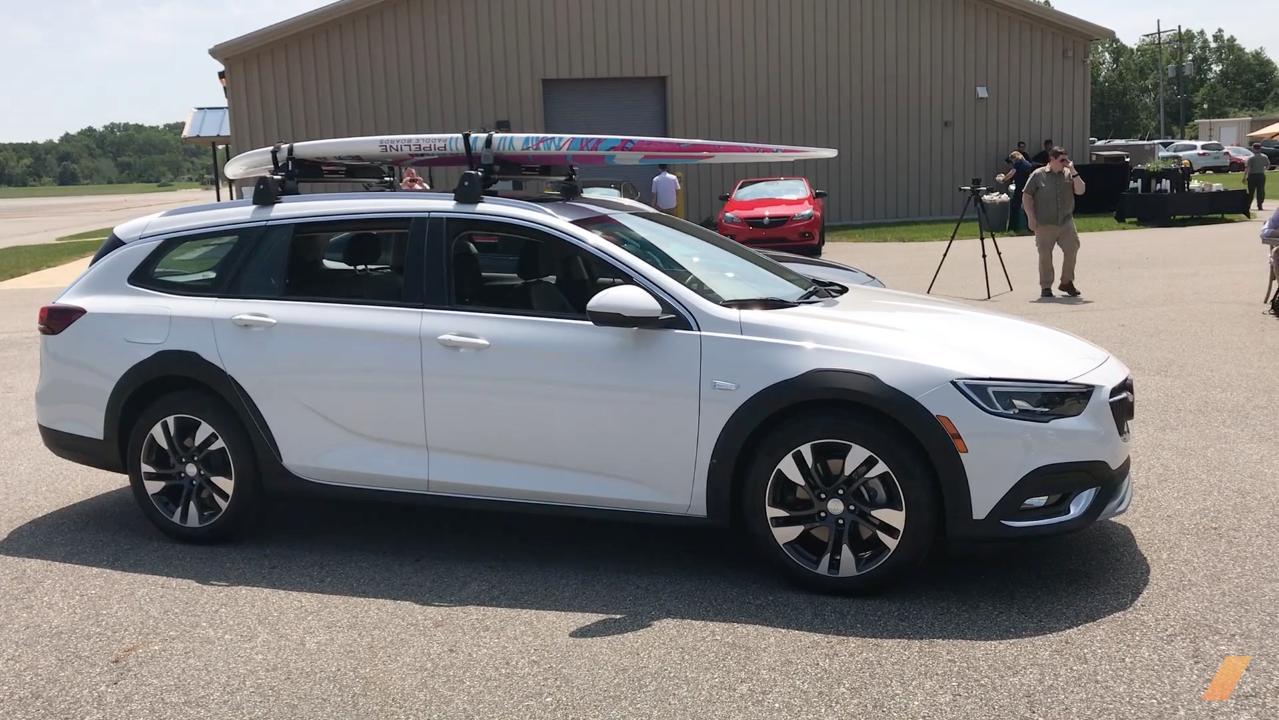