And find that it's a must-drive three-row family crossover

COUER d'ALENE, Idaho — You're going to hear the name 2020 Hyundai Palisade a lot in future three-row family crossover reviews. As in, "This interior just doesn't have the premium feel of the Hyundai Palisade" or, "This is more expensive than the Palisade, but you get less equipment." That's what comes from creating such a well-rounded entry that checks just about every box for would-be buyers of three-row crossovers.

Now, the Palisade may be new, but it's not like Hyundai has hit a home run in its first at-bat. The forgettable but reasonably competitive Veracruz hit the scene back in 2007, and was then replaced by the three-row Santa Fe (known as the XL for 2019). Both of those had common flaws: They were less spacious than their competitors, they weren't as good to drive, and their styling hardly made them stand out from the crowd.

All of that is corrected with the Palisade, but surpassing the bar set by Hyundais past was rightfully not the goal. Hyundai's newest three-row crossover is considerably bigger than the Santa Fe XL (3 inches longer, 3.6 inches wider, and there's 4.5 extra cubic feet behind the third row), but the more relevant feat is that it's now more spacious than many three-row competitors. It was something we noted when we compared its dimensions to the Subaru Ascent, Honda Pilot, Toyota Highlander and Mazda CX-9, but it's readily obvious when experiencing it in person. You can fit someone taller than 6 feet in each row simultaneously (your kids will therefore be that much more comfortable), including in the third row. The rearmost row of seating provides plenty of headroom and under-leg support (unlike the new Ford Explorer) thanks to a seat bottom that was raised considerably from where it was in the Santa Fe XL.

That was one of that SUV's key flaws, but so was its six-person capacity when equipped with the popular second-row captain's chairs. Adding an extra seat belt to the third row (along with extra width) allows for seven — that the standard second-row bench seat results in an eight-person capacity was of secondary importance, according to product planning manager Trevor Lai. Another goal was to provide an enlarged cargo area, especially behind the third row. Lai says he and other product planners distinctly remember seeing Honda advertise that its previous-generation Pilot could fit a 75-quart cooler behind its third row. As such, they requested that engineers provided enough space for an 80-quart one. They got 100 quarts instead. That equates to two jumbo golf bags and multiple carry-on roll-aboard suitcases. A removable floor panel opens up additional space, which can also be used to stow the rolling cargo cover.

It's also not just a matter of space in the Palisade's two rear rows. There are two cupholders beside each outboard seat, air vents in the ceiling, and two USB ports in each rear row (SEL and Limited). The second-row seats slide forward by pushing one of two redundant buttons on the seat shoulder and at the base of the seat cushion. The resulting gap to the third row could be bigger, but there's a unique grab handle integrated into the C pillar that helps climbing inside. The third row's square-ish cupholders were also purposely shaped that way to serve double duty as a second grab handle to be used when climbing out. Thoughtful.

Admittedly, much of this packaging and rear-seat feature content is shared with the 2020 Kia Telluride, which utilizes the same platform. Indeed, if you look at their specs, it's pretty obvious they're fraternal twins. The Kia is just a wee bit more spacious due to its boxier rear shape. Feature content is awfully similar too, and if one's better to drive than the other, it would take a back-to-back drive to notice. Nevertheless, there are a handful of things the Palisade gets that the Kia does not. One is an available power-folding third row and the Limited's standard all-digital instrument panel that changes its design depending on drive mode. You also get a push-button electronic shifter that's refreshingly not gimmicky and genuinely serves a purpose by saving space on the center console, which provides Honda-like levels of clever small-item storage solutions. 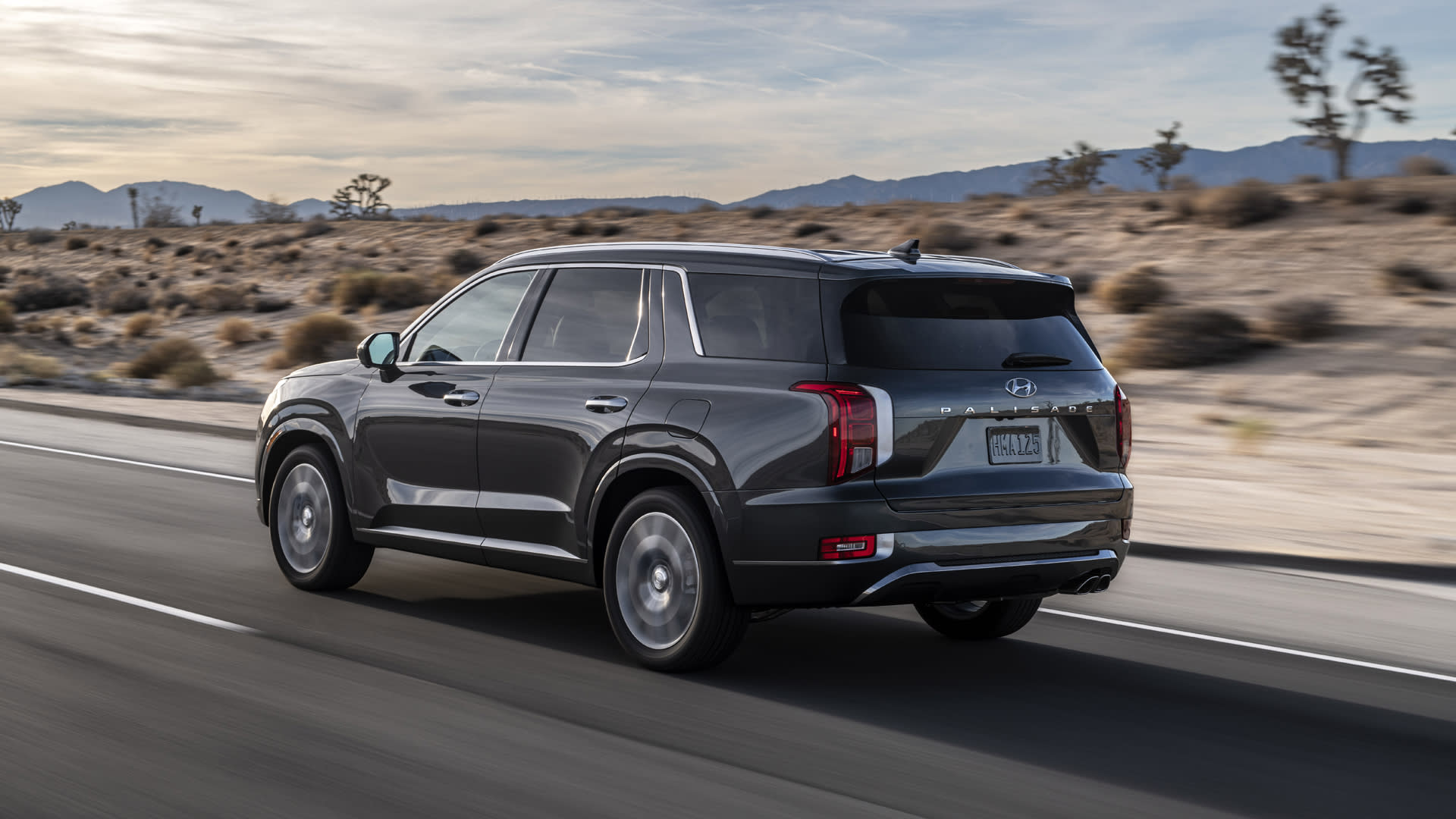 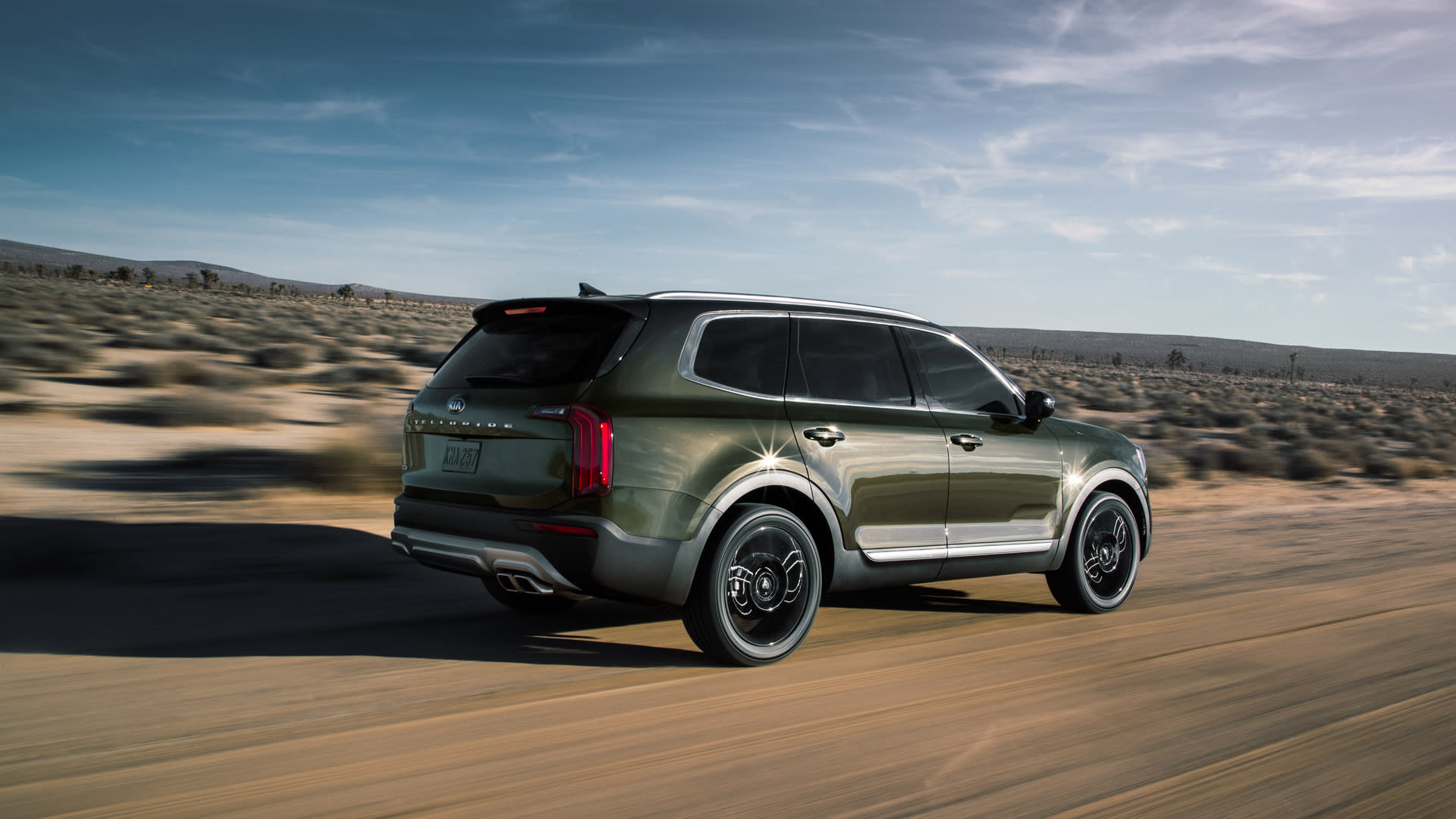 Ultimately, the main differentiator with the Telluride is the Palisade's styling. Actually, there's plenty differentiating it from the rest of Hyundai's SUV lineup, as well. Senior chief designer Chris Chapman equates the styling of most manufacturer lineups to Russian nesting dolls — increasingly larger versions of the same look. By contrast, Hyundai is going for something more akin to a chess set ­— each different, but sharing common elements. On this chess board, the Palisade is the king. You can see similarities in the grille shape and headlight cluster hidden within recesses below a thin strip of LED lighting. In the Palisade, though, that lighting cascades into that cluster and appears to slice behind body work. It's just one of several interconnecting elements, including the bright work surrounding the side windows and taillights.

Frankly, there's an awful lot going on in the Palisade — perhaps too much, especially with the chopped fender flares and the Limited's extra-shiny grille surround. The Telluride is cleaner and will probably age better, but in this moment, the Palisade projects a more premium vibe.

That's definitely the case inside, where there is a distinctly upmarket appearance that doesn't need to resort to giant swaths of fake wood trim to get the point across. There are handsome, textured trim pieces on the dash, doors and center console, along with soft-touch surfaces and high-quality switch gear. Now, there is "wood" trim in the Limited's tan interior, but it has lines seemingly etched into it to create a more modern look. Hyundai's designers say they were going for something that evoked "the serenity of a yacht." We don't own a yacht, so who knows if they succeeded, but at least the impressive Harman/Kardon audio system made Sirius XM's Yacht Rock Radio sound reasonably palatable.

The general dash layout is similar to what you'll find in the Telluride, as are the user-friendly tech interfaces. An 8-inch touchscreen is standard with a 10.25-inch one available (shown below), but unlike their placement in the Telluride, those adverse to the iPad-on-the-dash look will find the Palisade places them in a binnacle integrated with the instrument panel cowl. It's a classy look evocative of Mercedes' latest design, which is surely a matter of coincidence since Hyundai and Mercedes were simultaneously developing their respective looks. Classy minds think alike. You also don't lose much by opting for a lesser trim level — a Palisade should always seem a bit more stylish and ritzier inside than a comparably priced Pilot, Ascent or Explorer. 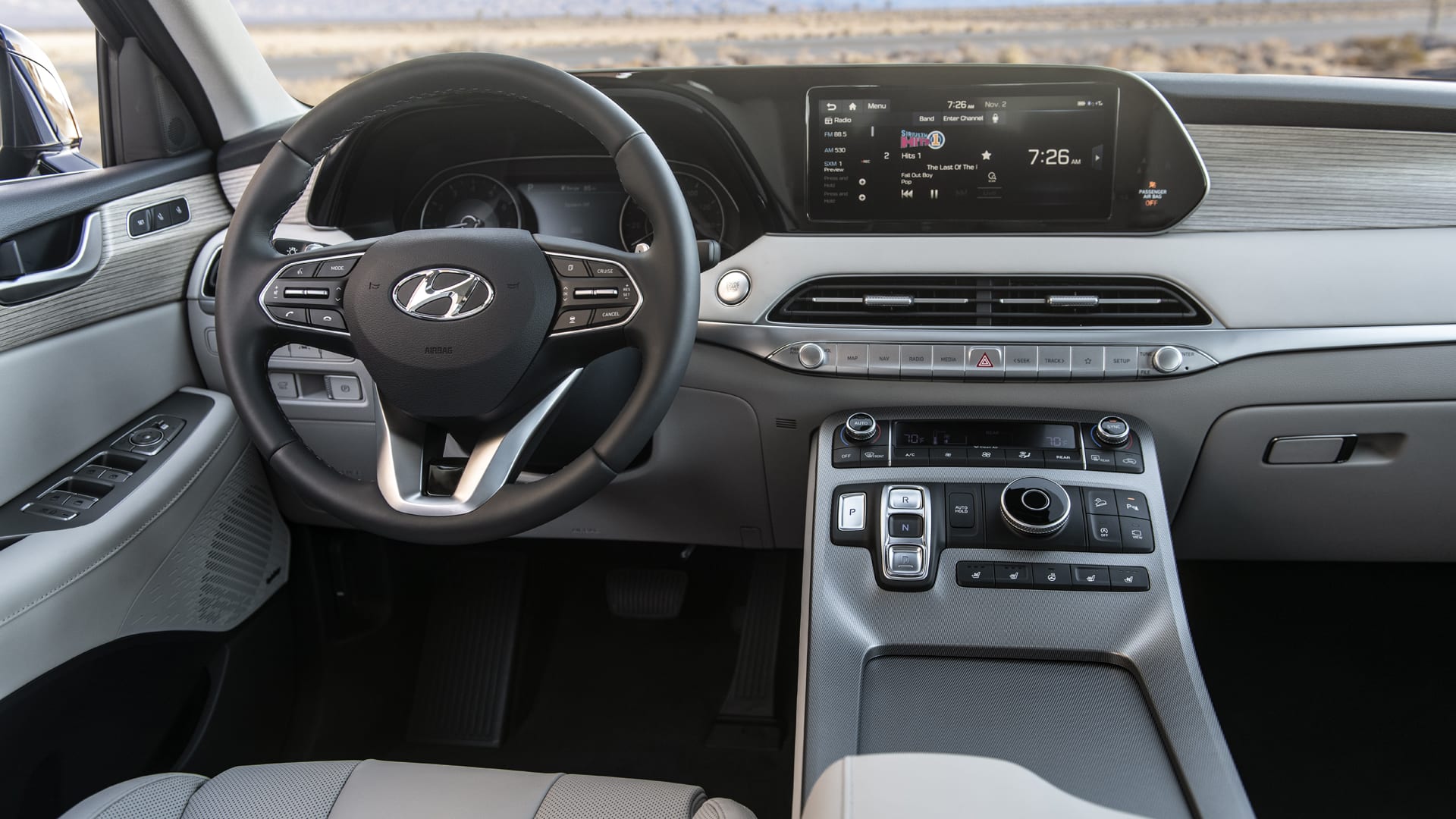 However, we wouldn't count on it being more responsive, comfortable or powerful when behind the wheel. Much like the Telluride, the Palisade offers a well-rounded driving experience free from bad habits, but also bereft of anything particularly memorable. Effectively, it reaches the bar set by the vast majority of buyers in the segment.

The 3.8-liter V6 engine produces plenty of power (291 horsepower, 262 pound-feet) and is reasonably efficient (an EPA-estimated 21 or 22 mpg combined) thanks to its ability to run on both the regular Otto and more efficient Atkinson cycles, but it ultimately produces acceleration on par with most other vehicles in the segment. The steering is precise and gains a little extra effort when in Sport mode, but it also doesn't keep you particularly engaged in the driving experience. Similarly, the suspension capably controls body motions, and the stock tires do a good job of gripping pavement (or even loose gravel), but again, those looking for more zest should seriously consider a Mazda CX-9 or the powerful new 2020 Ford Explorer.

During our first drive in northern Idaho, the suspension sopped up poor pavement well despite our test vehicle riding on 20-inch wheels. There was no impact harshness, and unlike similarly shod vehicles, the suspension wasn't overly springy to compensate for having less tire sidewall. Opting for a Limited or an SEL with the Tow Package brings a self-leveling rear suspension that compensates for extra-heavy loads or a towed trailer with special mechanically controlled rear shock absorbers. This is altogether another area where the Palisade eclipses the Santa Fe XL, which had a rather unsophisticated ride prone to crashing on its bump stops when loaded, and being thrown out of whack over mid-corner bumps.

Really, the Palisade is so completely superior to the Santa Fe XL that it doesn't actually seem like a replacement. Yet, it still possesses the same Hyundai hallmarks that have long attracted consumers to the brand: excellent value (you get more features at a price that starts at $32,595 and tops out at $47,445), a lengthy warranty (5-year limited, 10-year powertrain), excellent anticipated reliability (the old Santa Fe got top marks) and superior safety credentials (there's unmatched standard safety tech, and Hyundai says it anticipates a Top Safety Pick+ award from the IIHS, which would be consistent with its other models).

Admittedly, all of that is pretty much shared with Kia, so between the Palisade and Telluride, there'd be nothing wrong with beginning and ending a three-row family crossover search with these fraternal twins. 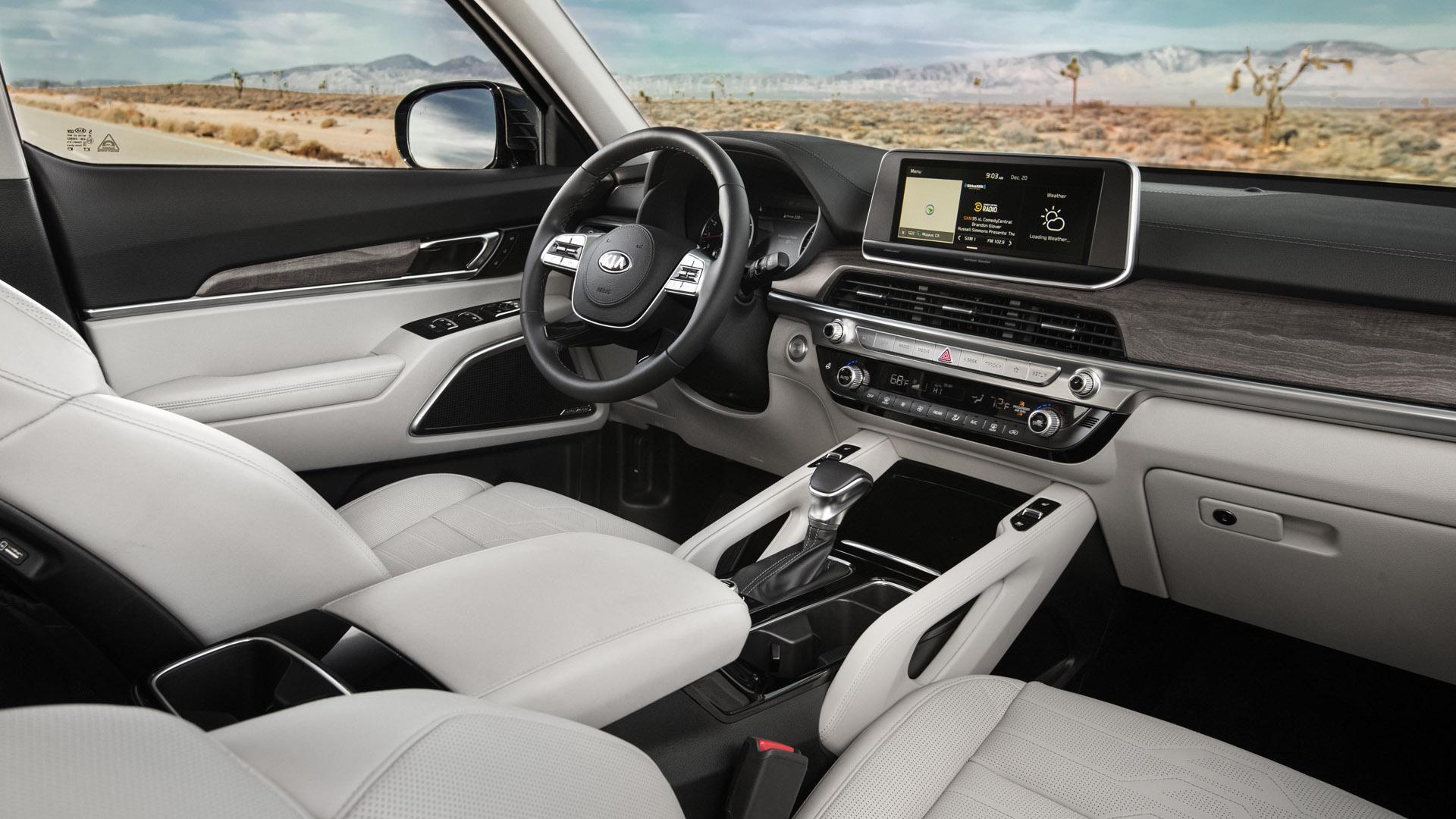