Joel Stocksdale
Though we have only seen glimpses of the cars, the Mercedes-AMG CLA 45, GLA 45 and A 45's new engine has been fully revealed, and is starting production. It will be available in two versions, a base one with 382 horsepower and 354 pound-feet of torque, and an S version making 416 horsepower and 369 pound-feet of torque. Peak horsepower for the base engine comes at 6,500 rpm and 6,750 rpm for the S engine. Peak torque comes pretty high in the rev range for both engines. In the base engine, it peaks from 4,750 rpm to 5,000 rpm, and in S engine it peaks from 5,000 to 5,250 rpm.

Those specs make this the most powerful production four-cylinder yet, and they come as a result of a seriously burly engine. It features an aluminum block with a closed-deck design for high strength. The steel crank and aluminum pistons are all forged. The turbocharger is a twin-scroll unit that takes advantage of an air-to-water intercooler setup and both port and direct fuel injection. The engine stays cool with both a primary radiator behind the grille and an auxiliary one behind one of the wheel wells.

The transmission shares the engine's cooling circuit and has its own heat exchanger mounted directly to it. Also interesting is the fact that the engine is oriented 180 degrees opposite its predecessor with the exhaust manifold and turbo facing the firewall. This apparently helps reduce the complex turns needed for intake and exhaust piping, and that presumably also improves gas flow. And like all of AMG's big V8s, each engine is assembled by one person's hands.

While all the final details on other parts of the 45-series Mercedes-AMGs are still hidden, we do know a few other things. The cars will feature an eight-speed dual-clutch transmission, rather than the seven-speed units of the standard A-, CLA- and later GLA-Class cars. All-wheel drive will be standard along with a drift mode. The U.S. will be getting CLA-Class and GLA-Class versions for sure, and an A 45 hatchback will be available overseas. We've also seen what appears to be a GLB 45 testing, though no official announcements have been made. Since the engine is entering production, we'll probably learn more about the cars it will go into by the end of the year. 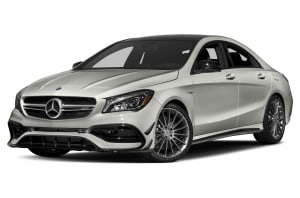