The rugged little Jimny embodies what made the Defender great

Lake District, U.K. – The Land Rover Defender is to Brits what the F-150 is to Americans. Or rather it was, before it got too expensive and the farmers all switched to Japanese pick-ups. The Defender was effectively put out to pasture, relegated to being a lifestyle trinket. And Land Rover's endless prevarication over replacing the Defender can be partly attributed to this dilemma: Should it be in the original's mold, a fix-it-with-hammers rugged utility vehicle? Or should it concede that market and instead become a premium premium-priced Mercedes G-Class rival? Meanwhile, while Land Rover had dithered, others have capitalized – not least Suzuki's Jimny, which nails the seemingly conflicting demands of the new Defender's brief in one cute, pint-sized package

So too is the Jimny priced at a level buyers in markets where it is offered can chalk up as a discretionary purchase. Dating back to the early 1970s, the Jimny has a heritage of its own to draw upon. But this lo-fi remix of traditional 4x4 tech and functionally slick styling has scored a bullseye for both utility users and the hipster brigade, both of whom place great value in authenticity.

True, U.S. buyers won't have the option of the Jimny as they will the Defender, no matter how many emails Suzuki receives. But it's interesting to explore how it pulls the rug from underneath Land Rover, right here on the British stalwart's home soil. 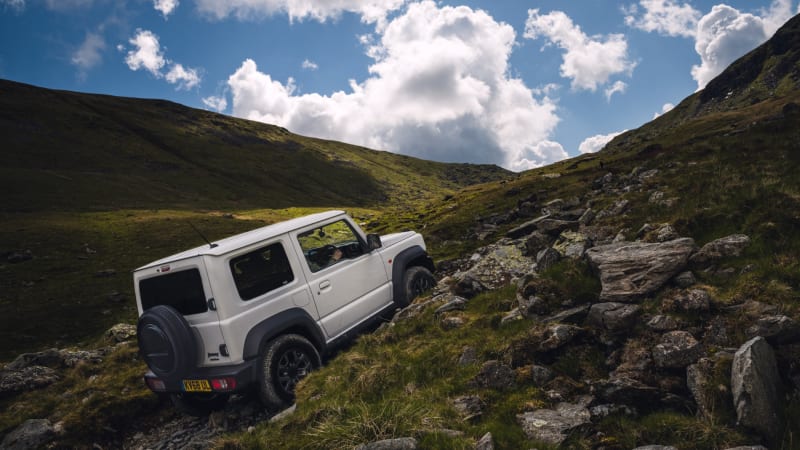 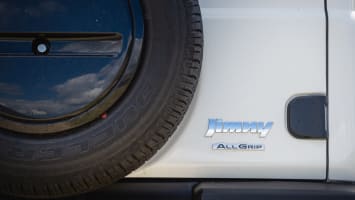 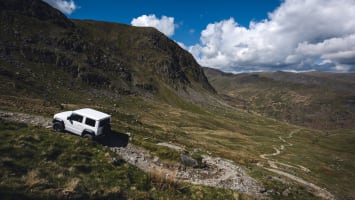 To demonstrate this we've travelled to the Lake District, a picturesque region on England's northwest coast with classic countryside vistas. Outside of the U.K., mountains topping out a little over 3,000 feet sound little to write home about – but, like the Jimny, modest size and ruggedness aren't mutually exclusive and there are trails here to test any street-spec off-roader. Competing pressures for access and a popular backlash against mechanized vehicles in the countryside mean tight controls for recreational drivers though, with many once-popular trails now closed to traffic.

Those that remain accessible carry severe restrictions, our chosen route over Gatescarth Pass rarely opened to traffic and, when it is, limited to 4x4s with wheelbases of 100 inches or less. A Wrangler would just scrape through but these remain a rare sight in the U.K., and the limit is arguably skewed to favor the home team: the 90-inch, short-wheelbase Defenders that remain a staple for the quaintly English pursuit of 'green-laning'.

A dwindling number of die-hards still drive commercial-spec Defenders, as they always have in these parts, the stereotypical ruddy-faced farmer with one arm draped out of the side window still a fixture of the local roads. The latter isn't an affectation by the way – it's mainly because the driving position in a Defender is so terrible the only way to free up enough space to steer is by having limbs flapping in the breeze outside the vehicle. The official checking permits at the start of the pass also fits the stereotype, his fulsome, pre-fashionable beard perfectly complementing the battered orange Land Rover he's leaning against. 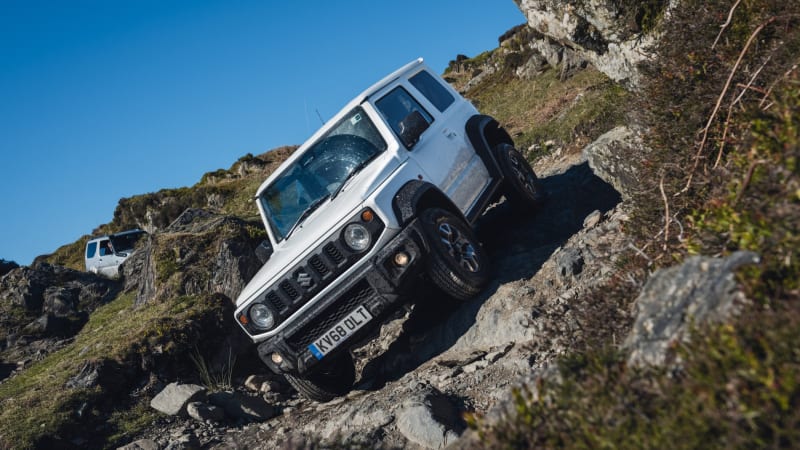 The arrival of a dealer-fresh Suzuki on 195-section street tires before him provokes a cocked eyebrow. The other Jimnys accompanying us are more built for this, running lift kits, chunky rubber and all the usual off-road addenda. They still look more like Tamiya models than serious 4x4s though.

Low-range engaged, the Jimny hurls itself at the first ascent, which immediately throws in loose rock, a meaningful gradient and turns tight enough to make sense of that wheelbase limit. Against a curb weight of just 2,500 lbs, the modest-sounding 100 horsepower delivered by the revvy, naturally-aspirated, 1.5-liter engine helps the Jimny skip across the rocks where heavier vehicles plod and heave.

It might be tiny but, even on these standard tires, the breakover, approach and departure angles compare well with a Wrangler Rubicon. Off-road trickery is confined to an old-fashioned mechanical lever to select 2H, 4H or 4L, the latter turning off the stability control and co-opting it into a wheel-grabbing simulation of diff lockers. Steering response best described as relaxed for the road feels more natural bouncing over terrain like this, the mechanical clunks through the transmission as you manhandle the long, floor-mounted shifter a reminder that for all the cute looks this is a proper machine. True, on the road its vague steering, body on frame shudders and bouncy ride are a novelty that might not compare favorably with more conventional rivals. But out here it's in its element. 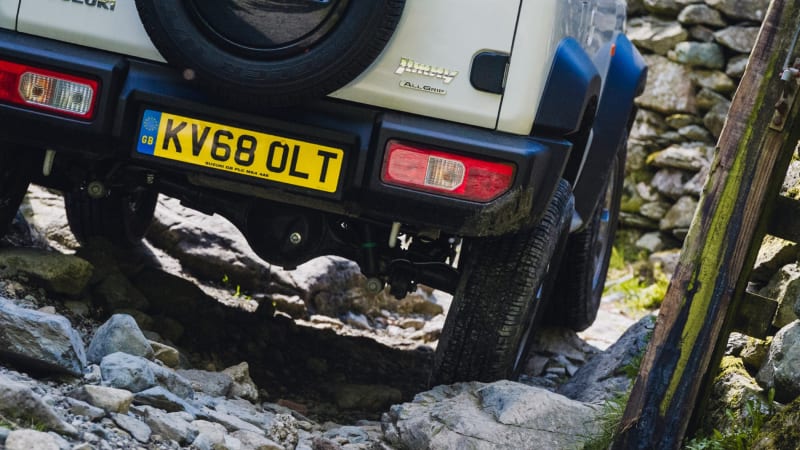 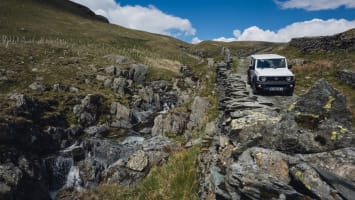 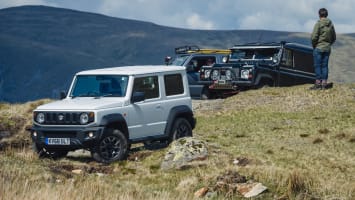 And unstoppable, even with at least one, sometimes two, wheels dangling as rocky steps test the limited axle articulation. A nipped brake on the unloaded wheel from the stability control and stab of gas from the driver are enough to haul the Suzuki through, nods of approval from our fellow Jimny drivers and a group of motorcyclists signaling some previously unstated initiation test has been passed.

As we stop to soak in the views one of the passing riders remarks on a dribble of oil on the trail. Diffs and sumps are quickly checked, one of the Jimny owners cheerily remarking "not to worry, probably one of the Land Rovers" in a good-natured jibe at the Defender's notoriously relaxed attitude to retaining essential fluids.

As we trundle over the other side of the pass and onward into the heart of the Lake District the Jimny's charm has only increased. Frankly the huggable looks would have been enough to endear it to enough lifestyle buyers to fulfill sales targets many times over. Confirmation that a bone-stock Jimny can cut it on terrain previously considered Defender territory, and without even breaking a sweat, adds credibility to the cool though. Land Rover, you already had a job on your hands replacing the Defender. Thanks to the lesson taught by this plucky little 4x4, it unexpectedly just got a whole lot tougher.