For a tiny SUV, the Jimny is a lot of fun

FRANKFURT — Imagine a Mercedes G-Wagen hit with an incredible shrinking ray, and you'll not be far short of the new fouth-generation Suzuki Jimny, last sold in North America in the mid-1990s as the Samurai. The resemblance is astonishing, but there's enough of the Land Rover Defender, Toyota FJ, Honda Element and Jeep Wrangler in there, too, to keep Merc's copyright lawyers sitting on their hands. Cute as a family of otters in your bath, the new Jimny's proving the social-media hit of the fall, with online fan clubs starting, splintering and re-forming as they argue over which of the six new body colors is their favorite.

Yet Jimny's no style pony. That lime green 'Kinetic Yellow' color might be the ultimate urban accessory, but it's formulated to make this tiny utility stand out in bad weather and on building sites. And in a world of fragile multi-clutch-based all-wheel-drive crossovers, Jimny is the real deal: body-on-frame construction, coil-sprung solid axles with three-link location at the rear and a panhard rod at the front, and a transfer-box set of crawler gears. And with entry, exit and breakover angles and ground clearance to rival that of a mountain ibex; this is a proper all-terrain automobile, just at five-eighths scale.

It all started of course with Hope: the Japanese Hope Motor Company. Its OM360 was a 1960s Lilliputian take on the World War II Willys MB Jeep. Suzuki bought the design from Hope, and relaunched it with a new engine in 1970 as the first Jimny. Through three generations and 48 years, Jimny's been called variously: SJ; LJ; Farm Worker; Samurai; Gypsy; and Sierra. It's been rebadged as a Mazda and a Maruti, and has sold a total of 2.85 million across 194 countries, including at one time America, though the company pulled out of the U.S. car market in 2012.

The outgoing third-generation Jimny had lost its way with a bland, wind-cheating design. The new Jimny is back to basics. Shortened by 1.2 inches, it's now 143.5 inches long, 64.8 inches wide, 67.9 inches high and runs on an 88.6-inch wheelbase. These bonsai dimensions are dictated by the Japanese Kei car, a size and taxation class aimed at tight urban spaces. 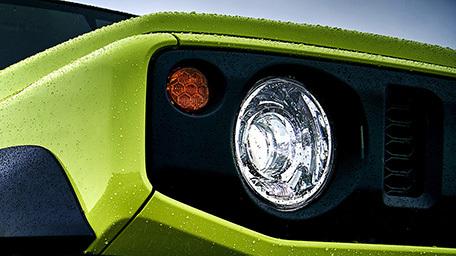 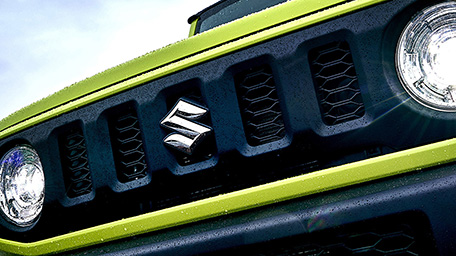 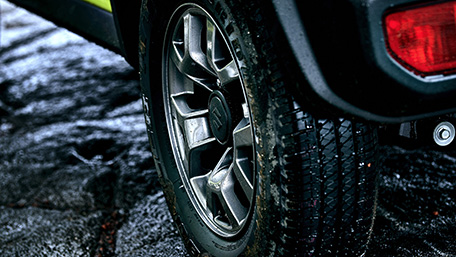 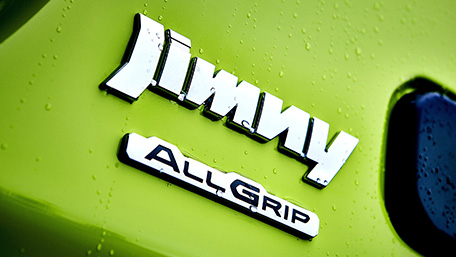 The new car also gets a stronger, cross-braced ladder frame under the separate body isolated on eight rubber bobbins. The axles have been beefed up, and there's a new naturally-aspirated 1.5-liter four-cylinder gasoline engine that makes 99 horsepower and 95 pound-feet of torque, with a choice of five-speed manual or four-speed automatic transmission. All the cars are part-time four-wheel-drive, with an old-school, three-position transfer box lever on the floor giving a choice of rear- and four-wheel drive in high or low ratios. Performance details are scant, but expect a top speed of about 90 mph, and a 0-62 mph time of around 12 seconds. On the European cycle, the Jimny gets combined gas mileage of about 31.3 miles per U.S. gallon. Prices in the U.K., where it goes on sale in January, start at £16,000 ($21,102) rising to about £18,000 ($23,740) for the all-the-bells-and-whistles top model.

Hisanori Matsushima, director of Suzuki's design center, pointed out the clamshell hood, square-topped wheel arches, chunky door handles, that big rear tailgate with rear-mounted spare and the roof gutter "to stop the water dripping into the cabin when you open the doors." I can't actually recall being dripped on when opening the doors in any new car, but this car's perfect proportions are completed by that pagoda-style overhanging roof. 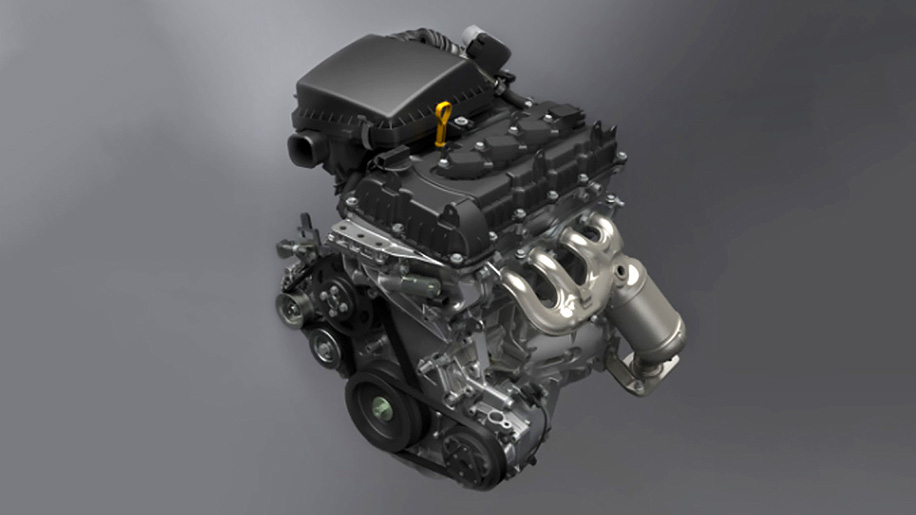 In the cabin there's a lot of black plastic, with visible stylized Allen bolts holding it all together. The fabric seats feel more hose-out friendly than luxurious, but the new wider seat bases are a darn sight more comfortable when jouncing around on forest tracks. The driving position isn't bad, but the steering only adjusts for angle, which won't suit taller drivers. Luggage space in a Jimny is a contradiction in terms — it's just over 3 cubic feet. That expands to 13.3 cu ft if you fold both rear seats, but if you're filling up all the seats, you better put the luggage in another vehicle. It weighs 2,502 pounds in top model form, and the towing capacity is 2,866 pounds.

As befits a Japanese car, equipment levels are pretty good with the top model getting climate control, 15-inch alloys, satellite navigation, Bluetooth and smartphone connectivity, heated seats and electrically adjustable and heated door mirrors. The big center touchscreen doesn't do much more than display the sat nav and radio and, in contrast to the rest of the outsize controls, is fiddly and impossible to use with gloves on. 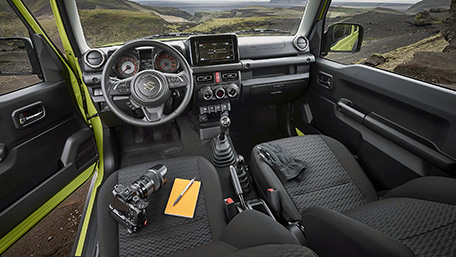 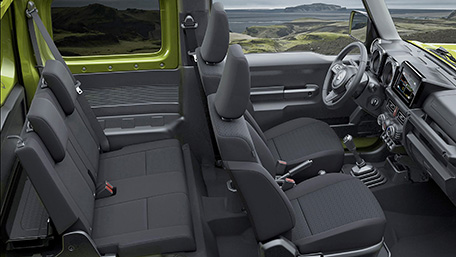 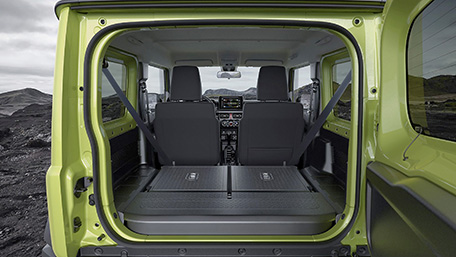 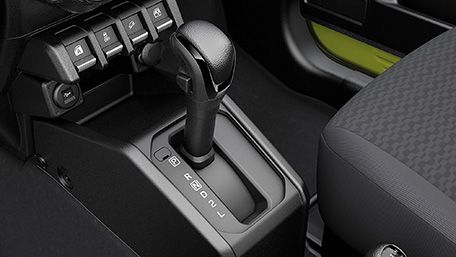 The engine is a willing if vocal unit, without much torque after 4,000 rpm, although it revs bravely if noisily to 6,250 rpm. We achieved an indicated 94 mph on the German Autobahn, but you wouldn't want to stay there for long. This is not an interstate weapon, and that's not the point. The refinement, though, is much better than previous models, and even with the engine racing at 3,400 rpm at 70 mph, passengers could still converse without getting hoarse.

The gear lever sprouts from the floor like a police baton and has a long but precise travel. The ratio gaps are odd, though, and this car needs a sixth gear like thirsty sailor needs a beer, if only for the gas mileage. You can shift on the fly from rear- to four-wheel drive, but if you want the low ratio set, you have to stop to engage them. For the first time, Jimny also sports hill hold braking and hill descent control.

To drive, it's a complete blast, with loads of body lean and those Bridgestone all-terrains squealing in early protest if you push through the turns. Actually, it holds on better than you might expect, and the short wheelbase and newly widened track give it a chuckable, nimble feel. That's only up to a point, however, as the high center of gravity, coupled with heavy solid axles and narrow spring centers, means you need to take care about sudden changes in direction. And ride quality is also compromised. The new Jimny is improved, but it still clambers over bumps, clatters through potholes and shimmies through turns. 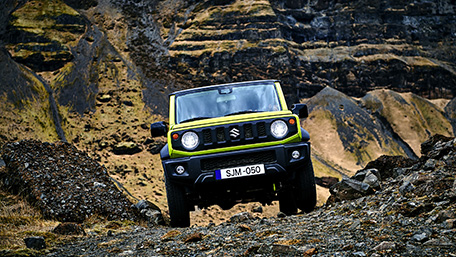 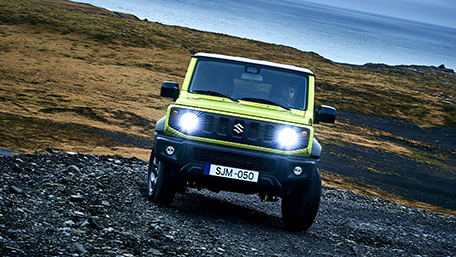 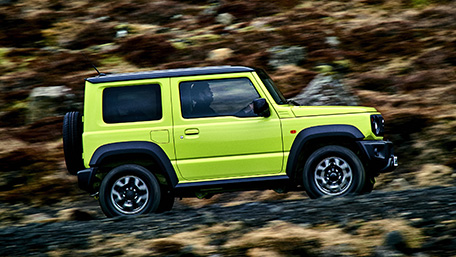 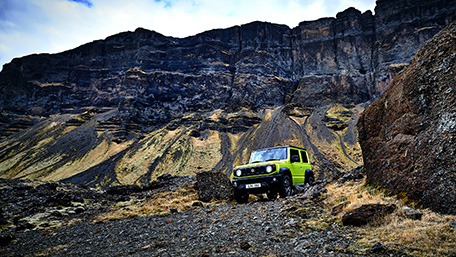 Recirculating ball steering is also better and more precise than similarly equipped rivals, but it's still a poor substitute for a decent rack and pinion.

They gave us a bone dry and hilly but undemanding off-road course, which the Jimny breezed, never once losing traction. With traction control duties carried out with the brakes rather than locking differentials, however, polished ice, wet grass and similar could bring the little car to a standstill, as such brake limited-slip systems can simply confound all forward motion. It's important to remember, though, that light weight and small size coupled with decent off-road geometry gets you a long way into the countryside; you'd have to be seriously out there to get Jimny truly stuck.

With a cheeky appeal and huggable looks, Jimny is the online juice of the moment, but its not-so-hidden depths have given it a loyal audience around the world. You'd never stop smiling while driving this car, and given Suzuki's traditional reliability, you'd be smiling for a long time. Sadly, you Americans won't, though, for Suzuki has no plans to reenter the U.S., which is strange because Jeep hasn't done so badly with its Fiat-based, Italian-made Renegade. I just know in my bones that Jimny could be a breakout success in America for Suzuki. Until the company comes to its senses, if you travel abroad, try and rent one, if only to see what you are missing.