It's autonomous, has 456 horsepower and goes 500 miles on a charge So many autonomous electric concept cars and supposed production cars seem to adhere to the same cab-forward, slippery luxury pod design. Everything from the Volkswagen I.D. Vizzion to the Lucid Air have this sleek but anonymous design. As such, it's enormously refreshing to see something like the Citroen 19_19 concept, which looks like a moon buggy and has impressive electric capabilities.

The 19_19's buggy design is partly due to its donk-worthy 30-inch wheels and tires developed by Goodyear. They prop the car up high in the air, and they sit in their own separate wheel arches set away from the body. The headlights are LED bars that form a front wing and integrate Citroen's double chevron logo. The lights are echoed at the back but in red. The tail tapers sharply like the edge of a wing. On the roof there are dual lidar sensors that look like fins. Most of the body has transparent openings, some obscured by a perforated blue finish that lets passengers not only see the landscape, but also the road beneath them and the suspension working away. 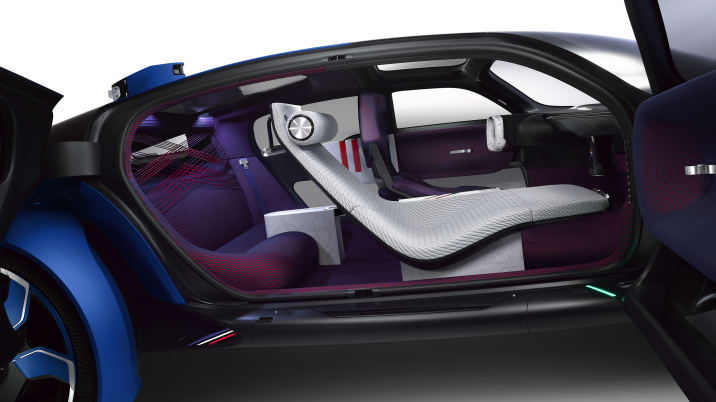 The interior is just as funky and stylish as you would hope from a French car company. Every seat is a little different. The driver seat is fairly conventional, keeping the occupant upright and attentive. The passenger seat is long and reclined for maximum comfort, with an adjustable headrest. The rear seat is a small love seat with elastic bands stretched across that can be leaned against. Everything is covered in a 3D mesh fabric in shades of blue, red and white, the colors of the French flag. The steering wheel and pedals are retractable, since the car is capable of being driven autonomously. All information is projected up onto the windshield. In the center of the dash is an illuminated cylinder that represents the on-board AI assistant. Parts of the interior including the storage cubbies and the steering wheel are finished in a plastic that looks like marble.

Citroen has also endowed this concept with some realistic mechanicals. It uses the same suspension with hydraulic bump stops as existing Citroens. It also features a dual-motor electric drive system making 456 horsepower and 590 pound-feet of torque. Power is supplied via a 100-kWh battery pack that can propel the car for up to 497 miles on the WLTP test cycle. The 19_19 also supports induction charging both at a standstill and while moving.

Despite some somewhat plausible mechanicals, we're not holding our breath for a production version of the 19_19. Even if it never sees the light of day, we're at least glad to see an automaker willing to be playful with electric and autonomous designs.