I drove the Citroen C4 Cactus in America [w/video]

In early April, I learned there was a Citroën C4 Cactus roaming around metro Detroit, and I immediately unleashed the power of the internet in my quest to get up close and personal with the French oddity. Following that, the Cactus sort of became my white whale. It drove by me one evening. It stalked my friends. It even visited my local bar, less than one block from my apartment. Readers emailed me with stories of Cactus sightings. Followers on social media tagged me in Cactus-related posts. The cactus emoji has been in my iPhone's bank of most frequently used icons for weeks.

But I finally drove it. And I didn't just drive any Cactus, I drove the Cactus. I can't tell you who it belongs to, and I can't tell you how I got it. All I can tell you is that associate editor Brandon Turkus and I spent the better part of a recent day driving the Citroën around metro Detroit. We even took the Cactus to buy a cactus. And when the initial excitement wore off, we weren't just left with a disappointing "never meet your heroes" moment. This thing is a total charmer. 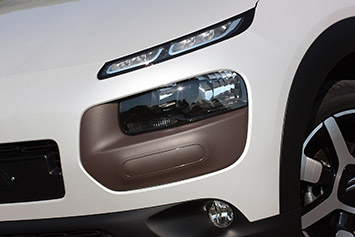 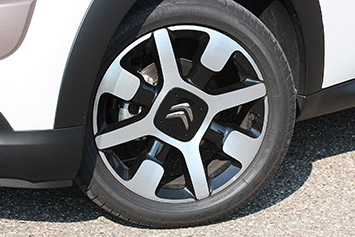 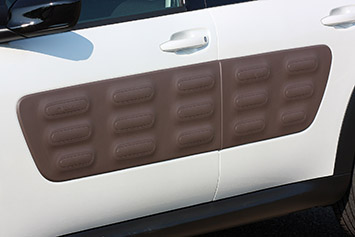 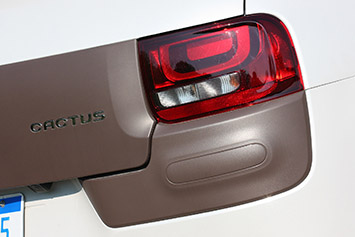 Look at it. If you thought the Nissan Juke was weird, the Citroën is probably a sensory overload. It uses your typical, squared-off hatchback shape, but from there, it's anything but ordinary. The corners are rounded off. The roof rails have a floating design. It's got a two-tone color scheme. And those things on the sides? They're called Airbumps – a bunch of air capsules underneath a thermoplastic polyurethane skin. Door dings and rogue shopping carts are no match for the bouncy Airbump technology. To put it another way, Mark Lloyd, lead designer for the C4 Cactus, says, "Why do you protect your smartphone but not your car?"

Quirky (awesome) design aside, the Cactus is super functional. And in a relatively small footprint, too. Since most Americans have only ever seen it in photos, you probably don't have a good sense of just how small it is. The Citroën measures 163.6 inches long, 76.6 inches wide, and 58.2 inches tall. That's basically the same size as a Volkswagen Golf. 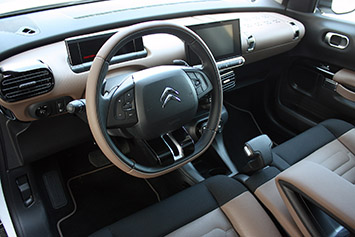 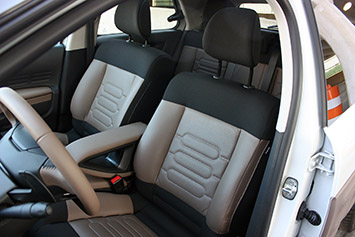 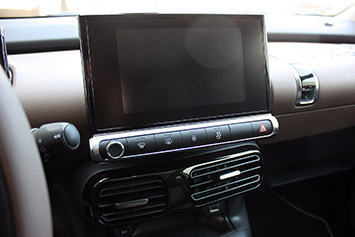 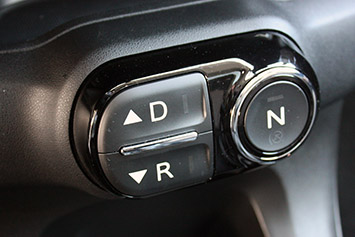 The cabin is just as interesting as the exterior. The overall design is simple, with a mix of flat surfaces and curved edges. Citroën even carried the Airbump theme inside, with rounded designs on the seats and doors. There's seating for five, and a large, low cargo bay in the back. The glass roof doesn't open or tilt, sadly, and there's no cover for the glass, either. It's a neat feature, sure, but grew annoying on a hot, sunny day.

Overall, the interior is nice. Really nice. The typical C-segment plastics are found within, matched with leather-wrapped materials here and there, as well as soft, cushy appointments on the armrests. The digital display in front of the steering wheel kind of looks outdated, but it's simple and clean. In the middle of the dash is the infotainment system, with logical, well-organized controls. Everything inside the Cactus works well, and feels good – no shoddy stuff here. Visibility is excellent, because of that shape. The Citroën is seriously comfy, too. Way more comfortable than you'd think. The seats are great – maybe best in class.

Rather than yammer on about the details, watch the series of videos below to see all of the Cactus' interior and exterior features up close.

It's awesome. And also awful. But mostly awesome. Let me explain.

The version I drove had one of the smaller powertrain options, the naturally aspirated, 1.2-liter inline-three, called the PureTech 82. As in, 82 horsepower. The torque output isn't much better, at 87 pound-feet. The good news is, the C4 Cactus only weighs about 2,100 pounds, so the low power isn't a total deal breaker. It's fine on the highway, where it will easily cruise above 70 miles per hour without drama.

But holy crap is it slow. European journalists have recorded 0-60 times in the mid-12-second range, and that certainly feels right. On top of that, the transmission is "simply hateful," as Turkus says. It's a five-speed automated manual – you know, like the Smart Fortwo transmission. Here's how it feels from behind the wheel: 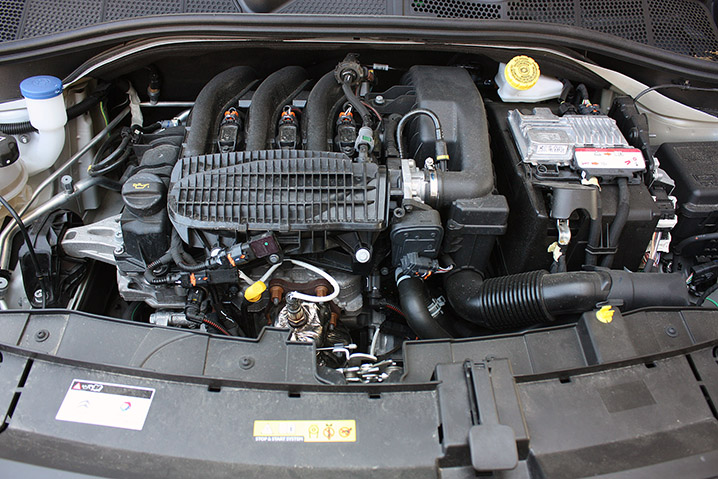 Another quirk: there's no Park gear. You select Reverse, Neutral, and Drive with the big buttons at the bottom of the center stack. But to park, you leave it in Neutral, and pull the parking brake. It's not bad or anything, just a fun novelty that we don't really get here in the US, except on DCT-equipped BMW M cars.

But here's the awesome part. Every other aspect of the driving experience is exceptional. The steering builds weight progressively – it's light and easy to use in parking lots, but has excellent heft and feel out on the road, at speed. The chassis is nicely sorted, with a comfortable, planted ride. The Cactus is never crashy and doesn't lack any sort of feedback. And this is a car that's tuned for Europe – more stiffly sprung than most US-spec cars, I imagine, riding on 17-inch wheels. In the corners, the Cactus stays remarkably flat. Under braking, there's no sudden grab or, worse, lack of feel or stopping power (there's not a lot of power or mass to stop, of course).

So yes, it's slow. But that's far less important in Europe than it is in the US, with congested city streets. The great thing is that the C4 Cactus is truly enjoyable to drive, once you're finally up to speed. Oh, and it gets about 50 miles per gallon on the US cycle with this 1.2-liter engine. It's easily more engaging than similarly sized cars available in our market. It's not Mazda3 good, but the great dynamics were a pleasant surprise. I'm truly glad I drove it, and not just because it's weird. 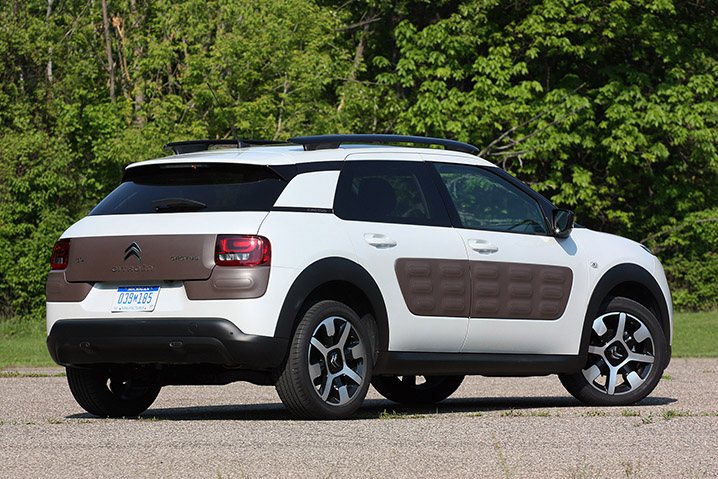 A Citroën In The US? What Does It Mean?

Nothing. So rather than address this question when it comes up in the comments, let me be absolutely clear: Citroën is not planning a return to the US market.

I see foreign-market cars in metro Detroit all of the time. Cars come over through Canada. American automakers test not-for-US products on our soil every single day. (Which reminds me, you guys can stop emailing with exclusive " Ford Ranger spotted in Dearborn" spy shots now.) Even beyond that, companies like Bosch and Roush do emissions and component testing for carmakers around the globe, and that often means importing some forbidden fruit to the US.

But to actually drive one of these cars in the US is incredibly rare. Hell, following my time in the Citroën, I drove home in a Bentley Continental GT3-R. Only 99 of those Bentleys exist in the US. And yet the compact Cactus I drove that morning is still more exclusive in this country. Forbidden fruit is just that. Delicious, but something we can only lust after from afar. The Cactus might seem prickly, but I promise, it's a sweet little thing that I'd be happy to drive again. But next time, I want a different powertrain.