2019 Subaru Forester Sport vs 2019 Toyota RAV4 Adventure: How they compare

Trying on the automotive equivalent of trail-running shoes

James Riswick
The 2019 Toyota RAV4 is not only completely redesigned, but reimagined as well. As we detailed in our first drive review, the new RAV4 ditches the more car-like and uber-utilitarian nature of its predecessor for something that's more SUV-like and characterful. It's a new direction exemplified in the RAV4 Adventure trim, which specifically targets those folks who plan to actually take their compact crossover to the great outdoors. People who will get it dirty, use the extra ground clearance and store things on the roof. You know, the sort of people who would consider the 2019 Subaru Forester. It too is redesigned for 2019, but its transformation is almost unnoticeable compared to the RAV4's. Forester customers were obviously quite happy with the way things were.

We got a chance to drive both the 2019 RAV4 and 2019 Forester back-to-back last week both on-road and off-road, so let's take a look at how they compare, including a look at their on-paper specs. The Forester got a new, more powerful 2.5-liter flat-four engine for 2019, and it now comes standard with a continuously variable transmission. It produces 182 horsepower and 176 pound-feet of torque, which is pretty much mid-pack among compact crossovers. Crucially, though, throttle response is so sharp that it makes the Forester actually feel quicker than it is when accelerating from a stop — a sensation enhanced even further by selecting the Sport Sharp mode button on the steering wheel. However, in either mode, the engine's remarkable power reveals itself as the tachometer and speedometer wind toward higher digits.

One must also deal with the Forester's CVT. Perhaps some may appreciate the smooth, uninterrupted acceleration that results from a lack of gear changes (nor even simulated ones as in some other company's CVTs), but others may find it unusual and irritating. Subaru's CVT is certainly not our favorite example.

By contrast, the 2019 RAV4 is conventional with its 2.5-liter inline-four engine and eight-speed automatic transmission, which behaves just as normally and effectively as one expects. The RAV4 is also considerably more powerful at 203 hp and 184 lb-ft — both compared to the Forester and to the entire segment as well. As a result, its acceleration is stronger (likely a difference of a half-second in 0-60-mph time) even if it may not initially feel like it. Unlike the Subaru's, the RAV4's throttle hasn't been given an extra shot of caffeine. Thankfully, it also hasn't been given the dose of ZzzQuil like its big brother, the Highlander.

Frankly, the RAV4's performance is capable but ultimately unremarkable, and the engine can be a bit gruff in the noises it makes. It's almost diesel-like at low rpm. It would be nice if Toyota offered a more powerful engine upgrade (we're not counting the 219-hp hybrid), but then, the same thing could be said of the Forester, which no longer offers its old turbocharged XT model.

Now, as for fuel economy, both the Forester and RAV4 are exceptional among compact SUVs. The standard RAV4 is just a bit better at 30 mpg in combined driving with either front-wheel drive or its basic optional all-wheel drive system. Opting for the Adventure or Limited trim levels adds a more sophisticated but ultimately less efficient all-wheel drive system that still manages to achieve 28 mpg combined. By contrast, every 2019 Subaru Forester has the same all-wheel-drive system standard that returns 29 mpg combined. The feeling you get when driving the Forester and RAV4 is profoundly different. In the new RAV4, the roof is low, the center console is higher, and it's vaguely reminiscent of Toyota's 4Runner and Tacoma. It does indeed feel a bit sportier and SUV-like, which is exactly what Toyota was going for. It can also feel a little confining.

By comparison, the Forester is like driving the Popemobile. The greenhouse is immense and boxy, and you sit up high with a broad view of the hood and road ahead. Besides the parking and general safety advantages, this visibility also makes off-road driving easier. During back-to-back runs on an off-road course in both a Forester Sport and a RAV4 Adventure, it was just easier to negotiate the Subaru through tight spots and avoid paint-scratching obstacles. This isn't to say the RAV4 is poor in this regard, it's just that the new Forester is exceptional.

Now, despite the name, the Forester Sport doesn't actually possess sportier suspension or steering tuning. As such, every Forester should therefore respond similarly well to inputs and smartly change direction as our test car did through an ultra-tight handling course. There wasn't excessive body roll despite the Forester's lofty ground clearance, but its handling can also be described as merely competent. It just doesn't provide the sort of driver feedback and connection one gets from a truly sporty SUV offering like the Mazda CX-5.

The RAV4 Adventure is actually pretty similar in this regard, although its added ground clearance does make it lean a bit more. That's ultimately OK, however, as this is a more dedicated off-road model. The body motions of other RAV4 versions are a bit more controlled, but demonstrate similar poise and an eagerness to turn into corners. Which is better to drive on road? Honestly, it's pretty even.

What about off-road? Admittedly, the off-road course was not challenging, but it did feature the type of mild obstacles you might find on a typical outdoor excursion such as ruts, mud, deep dips, steep hills and uneven areas where one wheel may come off the ground. For these, both the Forester and RAV4 provided more assurance and capability than something like a CX-5 or Honda CR-V. Besides their greater-than-average ground clearance (8.7 inches Forester, 8.6 RAV4 Adventure), they also have more sophisticated all-wheel drive systems and dedicated off-road driving modes for different surfaces. 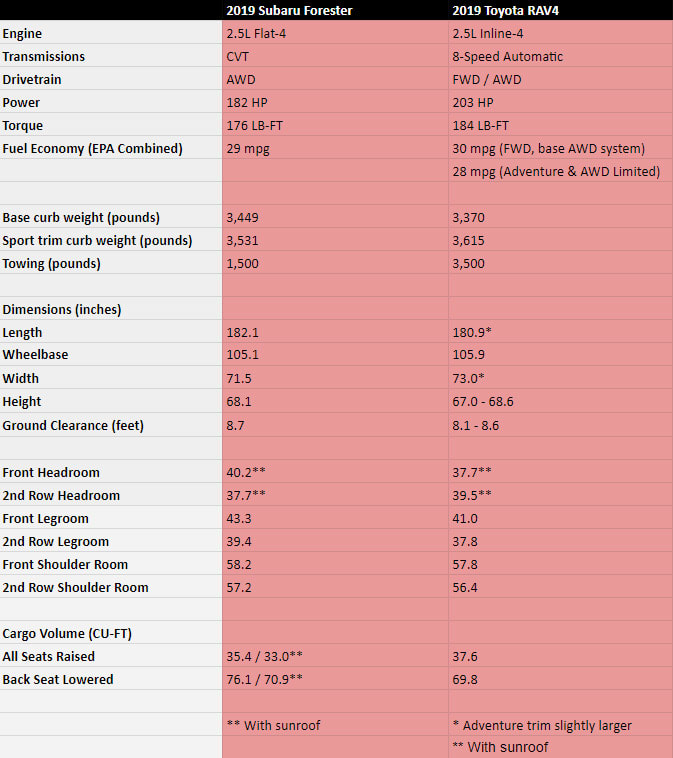 This is where the RAV4's radical transformation hurts it. There's still better-than-average rear seat legroom and cargo space, but there's less headroom than before, and the smaller cargo area is less boxy and therefore functional.

"Boxy and functional" pretty much sums up the Forester by contrast. Its taller body height allows for the back seat to be higher off the floor, providing more under-thigh support and effectively amplifies the legroom advantage it has over the RAV4 on paper (39.4 inches versus 37.8). The specs say the RAV4 has more rear headroom when both vehicles are equipped with a sunroof, which might be true, but the Forester feels more open and spacious.

In terms of the cargo area, the boxy Forester is better suited to carrying dogs or especially bulky items. The new RAV4's sloped tailgate and small rear quarter window just won't be as friendly to your four-legged friends. Both at least have pretty low load heights. The Toyota has under-floor storage for the cargo cover and a two-sided cargo floor — one carpeted, the other easily cleaned plastic. The Subaru counters with several little hooks and tie-down points, while also simply having more space for luggage.

What doesn't fit inside can also go on the Forester's sturdy standard roof rails. It unfortunately doesn't have the clever built-in crossbars of the Outback, but there are integrated tie-down points. The RAV4 Adventure lacks those, but still has robust roof rails and sliding cross bars. Other RAV4 trim levels have low roof rails less conducive to actual use. Every Forester comes standard with a touchscreen that is easy to use, but the Sport offers the optional high-resolution 8-inch version that also looks excellent. All come with Apple CarPlay and Android Auto, and in general, we prefer Subaru's system to Toyota's. The RAV4 has a 7-inch standard touchscreen mounted high within easy reach and view. It can be updated to an 8-inch unit, but both are easy to use and come with Apple CarPlay. Android Auto is not available, however, and Toyota's system can be a bit slow to respond. Honestly, either is fine and shouldn't be considered a deal-breaker unless you really desire the added connectivity to an Android phone.

As for safety technology, both the RAV4 and Forester come standard with a comprehensive amount of accident avoidance tech: forward collision warning with pedestrian detection and automatic emergency braking, and lane-keeping assist. Adaptive cruise control is also included, but both the Toyota and Subaru systems have their flaws. Toyota's has a tendency to unnaturally brake too hard as if reacting late to stopped vehicles in traffic. Subaru's beeps every time a vehicle is spotted ahead, which gets very irritating. Actually, all of Subaru's various driver support systems are prone to annoying excess beeping and persnickety warnings. Toyota's work more seamlessly in the background until you actually need them.

Both the 2019 Subaru Forester Sport and 2019 Toyota RAV4 Adventure have more style and character than their respective base versions, and indeed, we consider them to be the most desirable trims as a result. Ultimately, however, the Subaru's superior interior space and visibility make it a better match for more consumers. It also represents a better value, as you get more features for your money. Our Forester Sport test vehicle cost $31,815, whereas a comparably equipped RAV4 Adventure would be around $35,000 (our test RAV4 had considerably more equipment and therefore an even higher price). You also don't have to get an upper trim level to achieve the Forester's maximum outdoorsy capabilities — you do with the RAV4.

That said, there is something to be said about style, and in that way, the RAV4 Adventure arguably scores higher points. Despite the Sport's snazzy orange accents and distinctive cloth upholstery, every Forester suffers for its sensible nature with boxy, awkward proportions. Basically, you can think of these SUVs as the automotive equivalent of trail-running shoes. And like those, you usually have to sacrifice some fashion for functionality — or vice versa.
X