Aimed squarely at the BMW 3 Series, Audi A4 and Mercedes C-Class The 2019 Cadillac CT5 is here, and it's not a tweener sedan. After having done battle with the luxury sedan world through cars that were either too large or too small, Cadillac is using the CT5 to take direct aim at the BMW 3 Series, Audi A4, Alfa Romeo Giulia and Mercedes C-Class. Specifically, the CT5 replaces the CTS, but takes on vehicles one class smaller than what the CTS did. So, let's take a look at what Cadillac is bringing to the table.

To begin, GM knows it has a winner on its hands with the Alpha platform used on the CTS and ATS and the Camaro, so engineers adapted it to the CT5. This seems like a great start, because we all happen to love the driving dynamics from vehicles on this chassis. The wheelbase is a couple inches longer than the CTS, but the CT5 is a couple inches shorter in overall length. As a result, the wheels get pushed toward the corners of the car, leaving the CT5 with relatively short overhangs in the front and rear.

It looks different than both of the to-be-discontinued Cadillac sedans, but we wouldn't call it revolutionary. The rear end isn't quite a "sportback," but it's a "faster" shape, eschewing a traditional sedan's long decklid for a sloping-roof look instead. This shape does come at the expense of rear seat headroom, but we'll dive into the interior later. We got a little preview of the powertrain setup before this official reveal, but details were scarce. The base engine is the recently new 2.0-liter turbo four-cylinder found in the Cadillac XT4. Just as it did in that vehicle, this engine makes 237 horsepower and 258 pound-feet of torque. While it might be down on power compared to the old 2.0-liter in the ATS (272 horsepower and 295 pound-feet) we found it to be incredibly smooth, refined and not lacking in thrust compared to the old unit. We're sure the four-pot will offer sufficient power for the CT5, but the 3.0-liter twin-turbo V6 is lying in wait. This engine makes 335 horsepower and 400 pound-feet of torque. Both engines are paired to a 10-speed automatic transmission and can be had in rear-wheel drive or all-wheel drive in every configuration. So yes, you can get the V6 with rear-wheel drive, thankfully. Cylinder deactivation is also equipped to both these power units — the four-banger is able to run on two cylinders, while the V6 drops to four. Cadillac was entirely transparent about its new pumped-in engine sound strategy, too. They seem to be rather proud of the noise that will be playing over your speakers, but we'll be the judge of the sound these engines make upon driving them.

Cadillac says that the suspension is an "evolution of its previous sedans." Plenty of changes and improvements have been made to enhance comfort and handling, but it uses the same MacPherson-type front suspension and five-link independent rear design as the CTS. Cadillac touts new ZF dampers, but there's no talk of GM's MagneRide yet. Expect it to be on a future version of this car with a "V" involved. Cadillac only provided the curb weight for one version of the car, which happens to be a four-cylinder with rear-wheel drive. It weighs 3,660 pounds, and it'll only go up from there. That's nearly identical to a similarly equipped old CTS, and 200 pounds more than the ATS.

The simple two-trim path Cadillac has used for all of its recent cars is being applied to the CT5. Buyers will have the choice between the "Luxury" and "Sport" trims. Differences among the two are mostly aesthetic, but there are some tangible reasons to go for the Sport. That trim makes big Brembo front brakes standard, gives you different seats with bigger bolsters and also a different steering wheel with magnesium shift paddles behind it. Besides that, you'll be able to tell it's a Sport due to a different mesh grille design, lower rocker extensions, different 19-inch wheels, clear taillights, a spoiler and real carbon fiber trim on the interior. There's absolutely nothing wrong with the wood grain of the Luxury model, though. We asked Cadillac if there's any difference in the Sport's suspension tuning, and were only told that the Sport and Luxury are "similar." Perhaps Cadillac will tell us more soon. 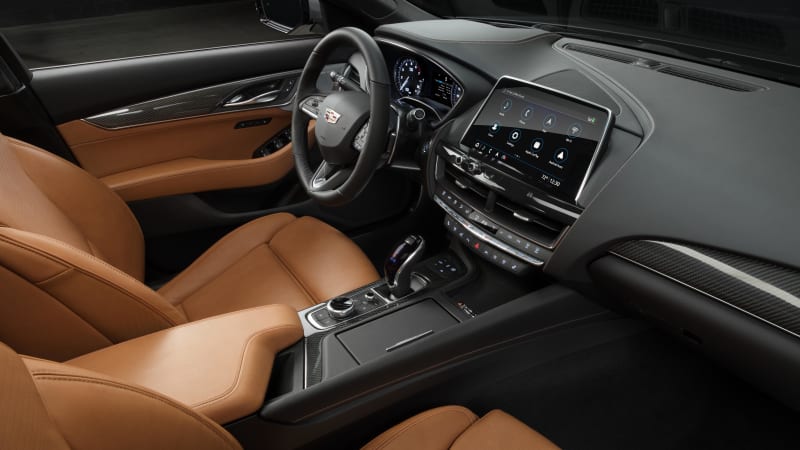 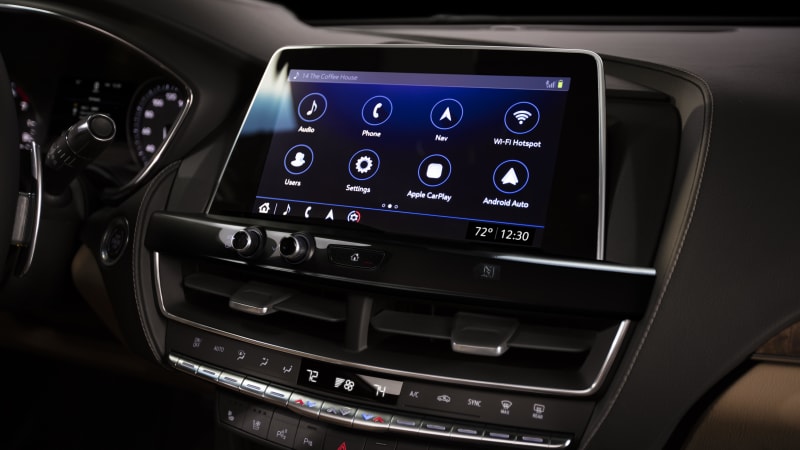 This interior is a big step up from the CTS and ATS. There's no trace of Cadillac's CUE system anywhere, replaced by a much more traditional and easy-to-use setup. A massive-looking 10-inch screen perches atop everything, and it's controllable via touch or a rotary controller on the console. Cadillac wants this interior to compare favorably to its German competitors, and this isn't a poor effort. If you look really closely, there are some physical buttons and menus in the infotainment system that are pretty Chevy-like, but this appears to be a Cadillac through-and-through. Both 18-way adjustable front seats are heated, cooled and massaging. Super Cruise is finally making its way into a vehicle that isn't the CT6, too. It won't be available when the CT5 initially launches, but we're told it will be available sometime in the 2020 calendar year on this model. Integration into other models will follow next year, as well.

Then Cadillac had a neat idea that it gave a stupid name: The "phone shrine." This nook found right in front of where the center console opens gives you a secure and out-of-the-way place to put your phone. It can't slide around anywhere, because the nook is vertical, unlike the many horizontal phone holders found in cars today. There's a passthrough into the center console where you can run your phone charger through, meaning you're free of wires cluttering the area. It really is a great idea, but let's drop the "phone shrine" name, guys.

It's a mixed bag in the rear seating area. On the positive side, there's plenty of legroom for the class. But as we alluded earlier, the sloping roof really cuts into headroom. My head was nearly grazing the roof, and I'm only 5'10". Anyone in the middle seat will be squeezed, as the tunnel rises up pretty high in the back.

Pricing isn't available for the time being, but we were told to expect it to land right in the thick of 3 Series, A4 and C-Class territory. Cadillac says those interested will be able to order the new Caddy sedan this fall.