American car enthusiasts have pined over Alfa Romeos for decades. The automaker stopped importing cars to the U.S. in 1995, with only a brief appearance with the beautiful but exotic 8C Competizione. The 4C followed along a few years later, but it too was a niche product, mainly intended to raise brand awareness than raise sales. That's where the Giulia steps in.

As a compact sport sedan, Giulia is Alfa's BMW 3 Series competitor. Sure, the Giulia Quadrifoglio might get all the headlines, but cars like the Giulia Ti Lusso and Sport will be the real volume models. This is an extremely cutthroat segment with high expectations when it comes to both luxury and performance. Alfa has been out of the game for a long time, and the reputation it left wasn't exactly the greatest. Alfa Romeo has a lot riding on this car. 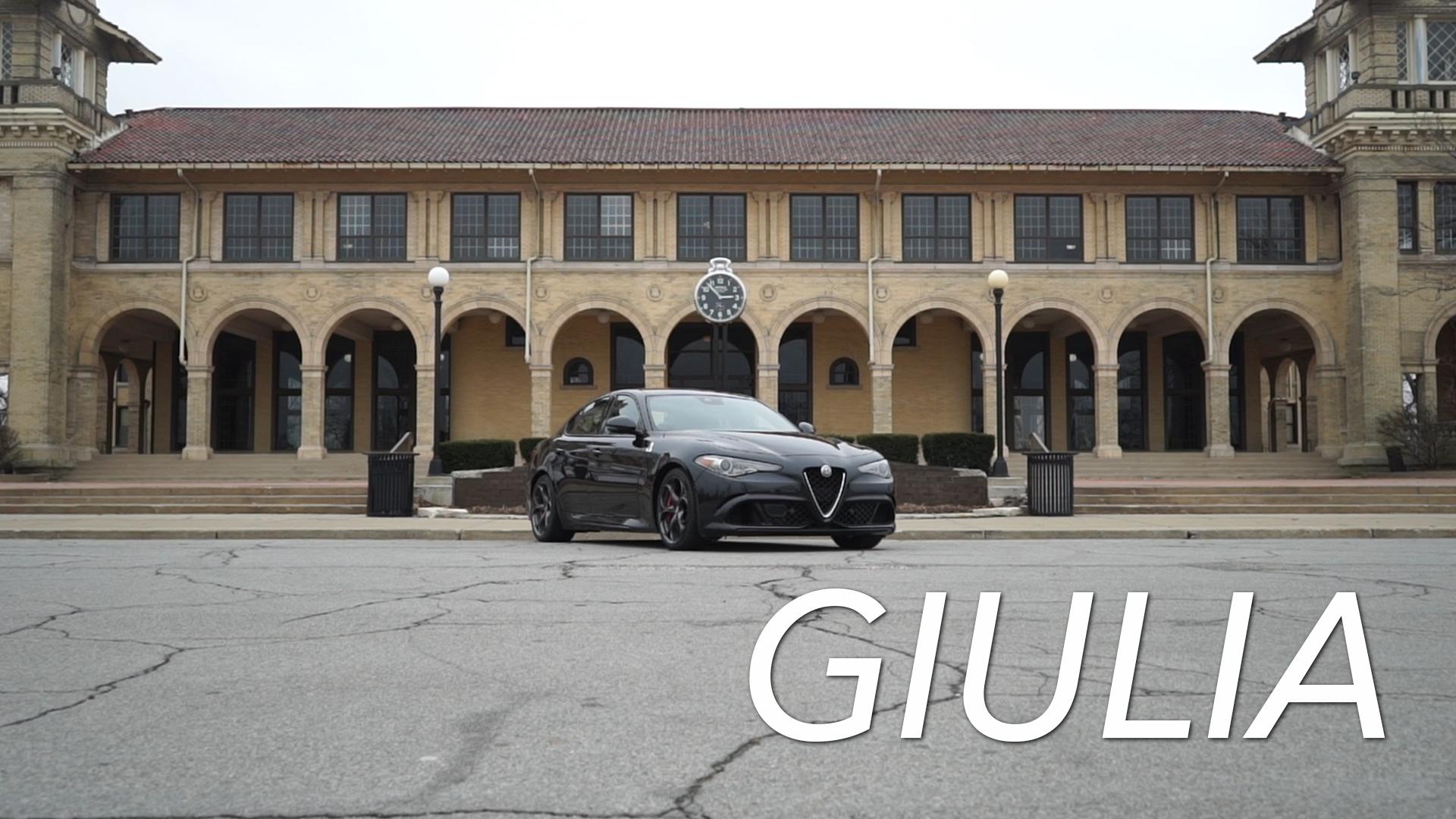 Associate Editor Reese Counts: I like this car right from the start. It's a looker. While I prefer colors that pop, the Giulia looks wonderful even in this metallic black paint. The proportions are all perfect, and that iconic grille has rarely looked better. If Alfa does one thing right, its the styling. I felt the same way about the interior. The design is all simple and clean. The seats are particularly nice, with Ferrari-esque ribs down the middle. I'm also a big fan of the wood and leather. Only some cheap feeling plastic bits brought it down.

This Giulia has a middling transmission, a good engine and great steering. There's some weird low-speed hesitation from the eight-speed that makes it feel like a dual-clutch. Once you're on it, the shifts are quick and smooth. The Lusso doesn't come with paddle shifters. That's fine. Not every car needs them. Buy the Sport if you want that sort of thing. Power and torque come on quick and effortlessly. It feels every bit as its class-leading (four-cylinder) 280 horsepower and 306 pound-feet for torque would suggest. The 5,500 rpm redline comes in quick and abrupt, making me wish it had a little more room to breathe up top.

The steering is wonderful. It's quick and precise but doesn't feel jittery. I'd have to drive the competition back to back, but I think this has the best steering in the class. The wheel feels nice in your hands. Some of the other touch points are a letdown, but Alfa got the driving position and controls just right.


Editor-in-Chief Greg Migliore: The more I drive the Giulia, the more I like it. It's gorgeous in an understated way, similar to how the Jaguar XE is elegant without being overdone. The signature cue for me is the V-shaped grille up front with the Alfa badge. It's a great look that transcends time. I can picture it on a 1960s Giulia. Staring at it while my dog wandered around the front lawn, it hit home that Alfa is really here — trying to make a go of it in the United States —and the Giulia is a key part of the strategy.

I found the four-cylinder engine / eight-speed automatic pairing in this tester to be a smoother setup than the eight-speed's work with the Ferrari V6 in the Quadrifoglio I drove earlier this year. The Quadrifoglio is a hot rod, but this, one done up in the luxe Lusso trim, was more comfortable. I still found the gearbox to be a little harshly tuned, but when I dialed up Sport and laid on the throttle, the acceleration was strong and smooth, holding the low gears as I blasted by a lethargic BMW 7 Series at a stoplight.

Inside, this Giulia looks great. The wood trim and creamy leather make for a handsome setting. It really is laid out for the driver, too. I had an excellent seating position. The steering wheel felt good in my hands. I could see everything well. It was a good experience that made me want to wring more out of the car. The Giulia is competitive in the smallish luxury sedan segment against the Cadillac ATS, BMW 3 Series, Mercedes C-Class, Jaguar XE and more, and Alfa brings its own unique dynamic. I'd really consider the Giulia if I were in this market. Potential buyers will either love or hate it, more so than some of its other options, but those who love the Giulia will really savor their experience.


Enjoyed my night in the @AlfaRomeoUSA Giulia. Sporty. Luxurious. Great design. Lots of fun, to put it simply. pic.twitter.com/utYgZMJacA


Senior Editor, Green, John Beltz Snyder: The Alfa Romeo Giulia was interesting to me, for lack of a better word. Not seeing many on the roads, the Alfa Romeo grille always elicits in me some sense of exoticism. This particular black sedan did so less than a 4C, 8C, or even a Stelvio, but the metallic flake in the Vulcano Black paint did look remarkably more dramatic than when viewing the car under overcast skies. Inside the car, I was impressed, if underwhelmed, by the tidiness of the interior. Spending more time in the car, though, I began to appreciate its eccentricities.

I went to turn on the car, and found the ignition button on the steering wheel (again, a feature that lends itself to an exotic aura. I liked the understated "d," "n" and "a" settings on the driving mode dial. It's not obvious what exactly that dial does until you use it, and the change in color on the digital displays clue you in to their uses. Still in "a" mode, which apparently stands for "Advanced Efficiency," the globe interface on the instrument panel isn't obvious. Sometimes it would go dim, or shimmer, or stars would appear around it. I didn't bother looking it up in the owner's manual, and a few internet searches didn't provide any help.

While I used the "a" mode for my rainy commutes in the Giulia, when the streets dried up, I switched to "d" for "Dynamic." The car began to respond very quickly to instruments, and I found the Giulia to be quite willing to dance through the corners and dart through traffic on the highway. This Alfa is still a little enigmatic to me, but, at this point, that only makes me want to drive it more.


Associate Editor Joel Stocksdale: I've been an Alfa Romeo skeptic for quite a while. I've heard about them driving amazingly and how they're the best looking cars around. Well, there are a lot of cars that drive amazing and look good, and most of them aren't as historically unreliable.

Now that I've finally had a chance to drive this Giulia (yes, this is my first Alfa experience), I finally get it. This thing is a blast to drive. I hold the Jaguar XE in high regard ( except the diesel), and I think this car is another step above in driving dynamics. The steering is super quick and laser sharp, and the wheel has just the right amount of heft and resistance. The car is eager to turn into a corner, and it feels light and responsive. On top of that, the ride quality is surprisingly good, if just a tad firm.

Even the engine is sweet. Sure it's not the shrieking V6 in the Quadrifoglio, but this turbo four-cylinder is spunky. It's rated at 280 horsepower and 306 pound-feet of torque, but it feels stronger than that. The little four-cylinder also makes a nice gargling growl that I wish was louder. I think Alfa should seriously consider offering some kind of sport package with a louder intake and exhaust. On the downside, there's a hint of turbo lag, and the engine redlines quite low, below 6,000 rpm in fact. There were a couple of times in manual shifting mode that I hit the rev limiter thinking I must have more rpm before having to shift.

The weak point of the Alfa in the interior. It looks nice at a glance with the leather-wrapped dash and door panels, and wood trim, but it falls short on important details. The most off-putting issue are the knobs for the drive mode selector, infotainment, and volume. These feel seriously chintzy. They're loose and plasticky, and feel like they came from an econobox from a decade ago. The seats also lack support pretty much anywhere. The lack of bolstering was my biggest complaint as I found myself sliding out of my seat in tighter corners. I also noticed the odd creak from plastic now and then on this roughly 4,000-mile car

All-in-all, though, I loved driving this Alfa. I don't even feel like a Quadrifoglio would be really necessary. The Ti version is great as is. If it turns out to be reasonably reliable, I may even become an Alfa convert.

Managing Editor Greg Rasa: My colleagues have used some apt words to describe this car. Gorgeous, interesting, exotic. Spunky certainly fits the way it drives — the engine and handling are easy to love. And then there's a mention of chintzy and enigmatic, which may pave the way for another adjective: quirky.

This would be an interesting car to drive on a longer test. How would quirks reveal themselves? One that was apparent to me from the outset: The speedometer and tachometer are, as in many cars, separated by a center information screen. But they are so far apart, and their cans tilted upward and outward enough, that for me, at least, the steering wheel blocks a full view of the gauges. I couldn't see the tach between 1,500 and 6,000 rpm (unfortunate, given the low redline), and could not read the speedo beyond 70 mph — not without ducking and dodging my head, anyway. It's a small thing, but sure to annoy over time.

Given the sweet way it drives, I could just resolve not to look at the instruments. Who needs 'em. But that is surely a quirk. Expect a few of those going in, and you'll be fine.