The new C-Class doesn't look much different, but looks are deceiving

Mercedes dreamt up the idea for the C-Class in 1974. It took eight years and hundreds of millions of dollars to translate that idea into the 1982 190 E. When introduced to the United States in 1993, Americans shunned it as "the poor man's Mercedes," and a journo at The Washington Post encapsulated the collective national consciousness' side-eye with, "It's not a real Mercedes. It's corporate pandering to the masses." Eight years later the C-Class would be the best-selling Mercedes in America. For the past 10 years, the compact sedan has been the best-selling model in the carmaker's global lineup. The last four years have been especially fruitful, the C-Class moving more than 400,000 units annually.

After perusing those numbers, we thought we'd made easy sense of the facelifted fifth-generation 2019 Mercedes-Benz C-Class. You need a loupe and a PowerPoint presentation to spot the bodywork changes. We figured the point of this facelift was not messing up a very good thing. But instead, Mercedes made a very good thing better, changing nearly 6,500 parts on the car in order to do it — roughly half the total component tally. That makes the 2019 C-Class the most comprehensive update in the nameplate's history. 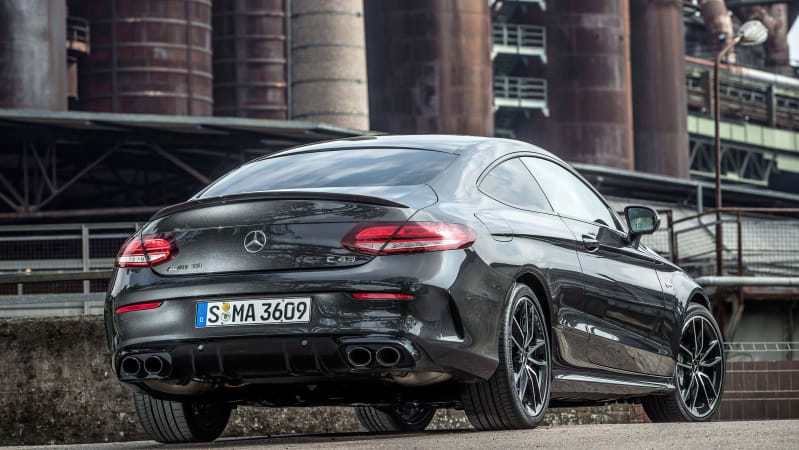 New LED headlights make the most glaring impression, but the twin rows of narrow rectangular elements come off as a touch alien. The lights will also impress the wallet: previously an $850 option, they're now standard. Multibeam LEDs will be an option, but dumbed down in acquiescence to U.S. regulations. The LED taillight design is new. Fine-spun grille and bumper detailing distinguishes the four design lines – Basic, Avantgarde, Exclusive, and AMG Line. Pureblood AMGs get a new air curtain on the front bumper, round tailpipes and one of two unique grilles: twin horizontal strakes for the 43 and AMG's Panamerica grille for the 63. Who will notice this minutiae? Aficionados, and those who were always able to find Waldo.

This facelift will not be known for its face, but for its muscle and its finesse. A new electrical architecture, 80 percent changed from the current car, enables convenience and driver assistance systems plucked from the E- and S-Classes. The cameras and radar look further down the road and around the car. Car-to-X communication will seek other cars and fixtures to chatter to. Active Distance Distronic allows longer periods of hands-off driving, and can change lanes on its own given a manual tap of the turn-signal stalk. The optional 12.3-inch digital dash fills the driver's view with page after configurable page of information. 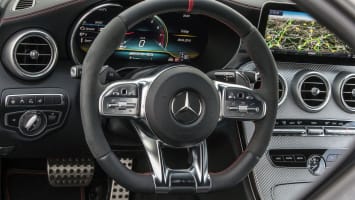 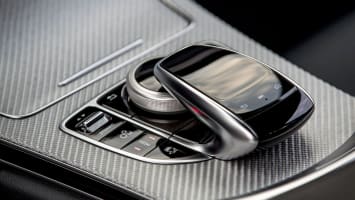 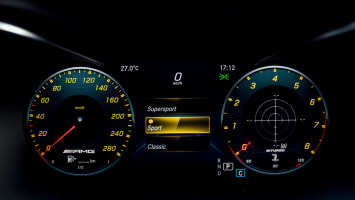 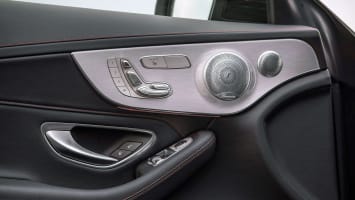 The new electrical system cleared the way for upgraded features like the parking collision warning, which will roll out with the U.S. launch of the MercedesMe app ecosystem. When someone hits the 2019 C-Class hard enough to jolt the in-car accelerometer — the same one that provides the G-Force readout during hard driving — the car sends a message to the owner's phone with the date, time, and general location of the impact.

Mercedes wouldn't get into pricing, but beyond the LED headlights, expect more stock goodies to help justify the almost certain price hike. All 2019 Mercedes C-Class models get Keyless Go, currently a $1,200 option as part of the Premium Package, bringing with it a rather uninteresting chunk of black plastic for a key fob. Apple CarPlay and Android Auto, a $350 option on the previous model year, are also thrown in the deal. The C-Class coupe, cabriolet, and AMG models come standard with a larger, 12.3-inch infotainment screen. 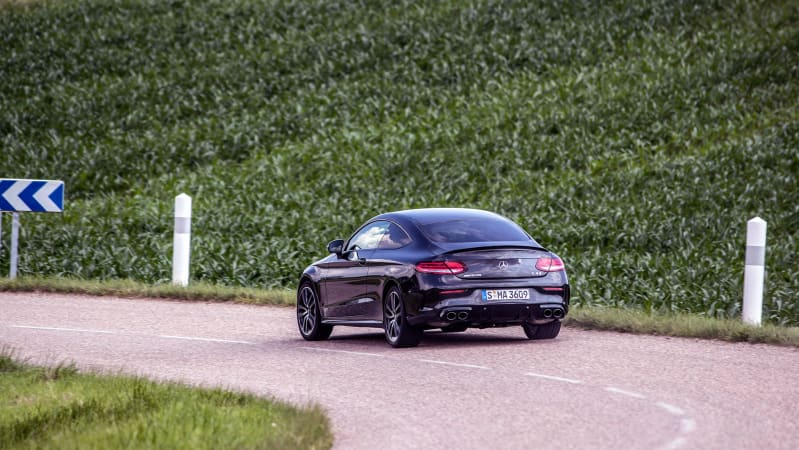 More power will come standard, too. The C 300 gets Mercedes' new M264 gasoline 2.0-liter four-cylinder engine, part of the modular family of motors recently installed in the CLS engine bay. It makes 255 horsepower, 14 more than the outgoing motor, with torque holding steady at 273 pound-feet. The twin-scroll turbo doesn't up the boost pressure, but delivers better efficiency. A two-stage valve lift system called Camtronic shifts the intake valves through short or long strokes depending on engine load, also for efficiency. To limit thermal expansion of the piston rings at the top and bottom of the stroke, the cylinder bores are slightly flared at each end. Overall fuel economy gains are estimated at about 4 percent.

The AMG C 43 sports a 2.9-liter V6, making 385 hp — 23 more than its predecessor — with torque again remaining level at 384 lb-ft. Larger turbochargers with max boost of 16 psi contribute to the cause. If there are any fuel efficiency gains, we doubt you'll ever find out about them — the car is too much fun to drive hard. 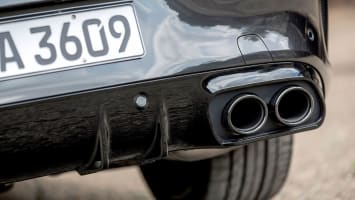 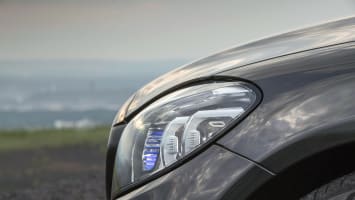 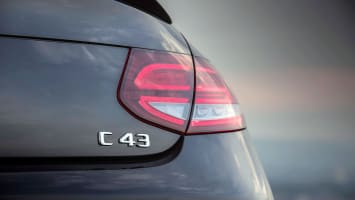 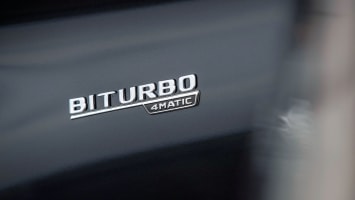 We praised nearly aspect of the C-Class range in our review of the current C 63 Cabriolet and C 300. The AMG C 43, while less raucous but perhaps more endearing because of it, earns all the same praise. We started our day in the AMG C 43 Cabriolet, ticking off boxes during a lengthy, winding route from Luxembourg to the Moselle Valley region of Germany. On an unrestricted section of Autobahn we ran the convertible up to its limit, which Mercedes says is 250 km/h even though the speedo registered 261 km/h (162 mph) at one point. AMG engineers stiffened the springs and modified the programming for the adjustable dampers in all drive modes, but the phrase "predictable results" still applies in two ways. One, unflappable triple-digit motoring is the sine qua non of German sports cars, and Mercedes is no rookie at this. Two, the droptop clings to the road.

As in the E-, G- and other recently redone Benz models, the portmanteau "infotainment" goes heavy on the "information" portion. The configurable digital dash can pile the screen with so much data that the area behind the wheel looks like a readout from Goddard Space Flight Center. The Classic and Sport themes put an over-designed speedometer dial on the left side, and two customizable areas in the center and on the right. We chose the Supersport theme with a central tachometer encircling a digital speed readout. Simple. Less simple are the new steering wheel's touch-sensitive control wheels, but we eventually got used to them. 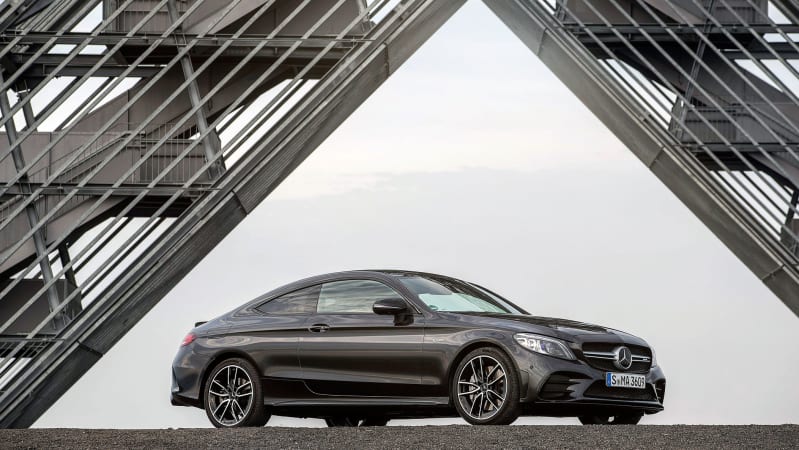 The C 43 series needs more edge than the series C 300, while leaving daylight between itself and the perpetually angry C 63. The resulting middle pitch exhaust note doesn't take well to the volume boosts in Sport and Sport+, sounding like a test tone through a bad speaker unless you're hard on the throttle (the same complaint can be had about the BMW M2). We chose an Individual driving mode with the firmest dynamic settings but the Comfort exhaust setting.

You forgive the misstep because of how the AMG C 43 sings through narrow, twisty German B-roads. The steering feels naturally weighted, and you can put the wheels just where you need them. Some decry the all-wheel-drive system's fixed 31/69 front-to-rear torque split instead of a variable option, but it pivots the car fluidly. If you need to bring the nose around through a fast 180, just dab on a little throttle and add a little lock, and the rear adjusts the car's attitude.

The brake pedal runs a generous arc from initial bite to real clamping, for excellent modulation. Just as we wrote in our review of the 2017 C 63, the transmission is "perfectly calibrated and practically omniscient, holding gears when it needs to, ripping through them at other times." The cabrio never faulted during in-corner or post-corner acceleration no matter how badly you may misjudge braking points on roads you've never seen. The suspension keeps nasty road action away from occupants — even when you can hear the wheels doing a Riverdance over some gutted stretch, the body holds steady. The car possesses an unexpected, enchanting agility for being north of 4,200 pounds, said weight due in part to luxuries like the climate-controlled AMG Performance seats that kept us warm and cool through changeable European weather. And the droptop is plenty quick. 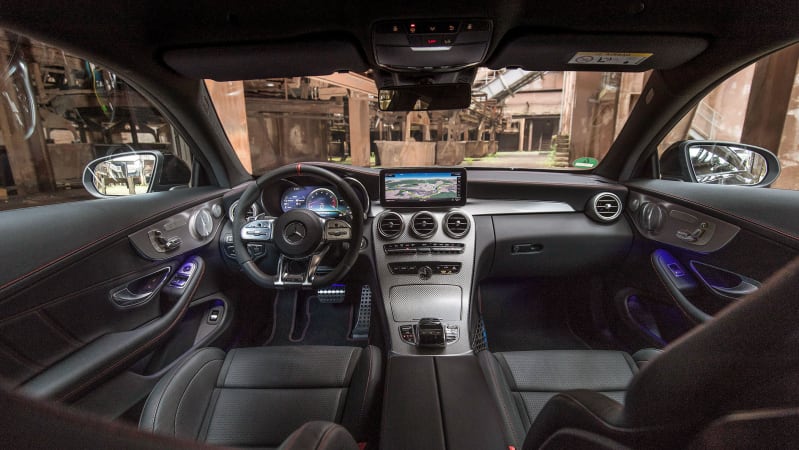 We tried the coupe next, indulging in the same driving experience but distracted by the aural experience. Tire noise shot straight into the cabin to the degree that it felt like we might be one giant steamroller tire in front. Emphatic wind noise arises from the mirrors and A-pillar, something we noticed on the C 300 Coupe as well, but not on the sedans. The hardtop puts a hard, resonating edge on the exhaust note in Sport and Sport+. We kept the coupe in Comfort mode until we needed to drive hard. The solution to those ills was to drive angry as much as possible. Enjoyment trumped all disturbances, until you get back to the village.

We preferred the AMG C 43 Sedan to the coupe, and perhaps even to the convertible. AMG decided that mature types who need four doors and four full-sized seats don't want the clamor coupe and cabrio buyers crave, so along with a quieter cabin overall, the sedan's exhaust note is near docile even in the "Git 'em!" driving modes. And it does everything the coupe will do, right down to the 0-60 mph time. 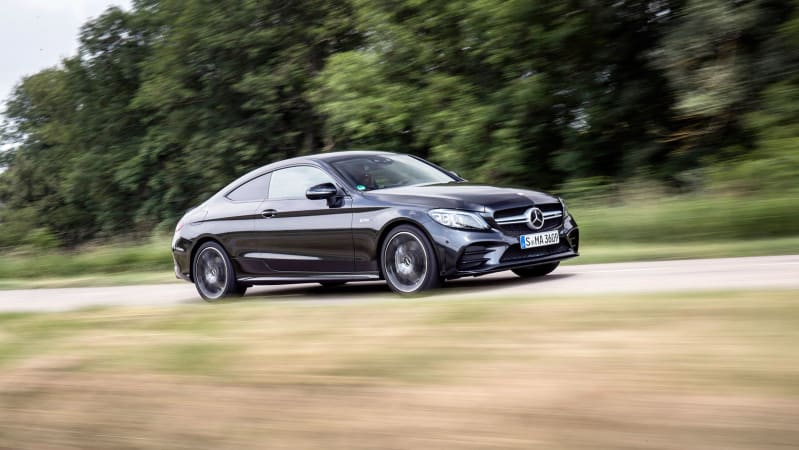 After all that, one wonders if the mass-volume C 300 would be the disciplinarian parent who throws all the best toys away, ousting the video games and VR glasses to leave you with a tennis ball and a pogo stick. The answer is, categorically, no. The softer settings throughout permit a few degrees more body roll in Comfort. The 130-hp deficit to the AMG shows in acceleration, with a 0-60-mph that's 1.6 seconds slower. When gunning for the upper reaches of Autobahn speeds, the C 300 needs noticeably more time and encouragement to touch its limiter. Nevertheless, the dynamism, to use a German automaker's favorite word, prevails because the software and hardware help you do the most with what's there, then get out of the way. Albeit with a softer exhaust note.

The entry-level C-Class is a good decade or more beyond any fear that it was a mindless exercise in "pandering to the masses." Although we'd take the AMG C 43 sedan, the C 300 is a valid alternative to the middle brother, a sincere prompt for the declaration, "This one, right here, is enough."