Tony Markovich
Living up to its reputation as one of the safest automotive brands on the market, Volvo continues to develop people-first technology as it pushes toward a hopeful goal of a world without traffic fatalities. Although the target currently seems like an impossible achievement, Volvo has impressed time and time again with innovative features that make the roads safer. The newest tech takes aim at distracted and intoxicated driving through the use of in-car cameras, sensors and algorithms.

The announcement comes shortly after Volvo released information about a different safety feature, an imposed speed cap. Volvo said all cars from model year 2021 on will be limited to a top speed of 112 mph. Volvo identifies speeding, intoxicated driving and distracted driving as three of the biggest risks to address.

In another announcement, Volvo said it was making a "Care Key" standard equipment on all cars starting in model year 2021. This key would prevent your teens from speeding. Not a lot of details were provided, but presumably it is similar in function or identical (except for color) to the "Red Key" you can currently buy as an accessory for late-model Volvos that allows you to set a speed limit, issue speed warnings, limit the audio volume and impose active cruise control settings. The person you hand the Red Key to can't override your limits.


Although speed limiting is a relatively simple implementation, driver monitoring has many more variables and requires a complex identification and response system.

Driver monitoring is not a new idea, but it's getting more involved. Some manufacturers already offer features that claim to identify when a driver is getting tired and can suggest they take breaks. Volvo is looking to advance this idea tenfold. 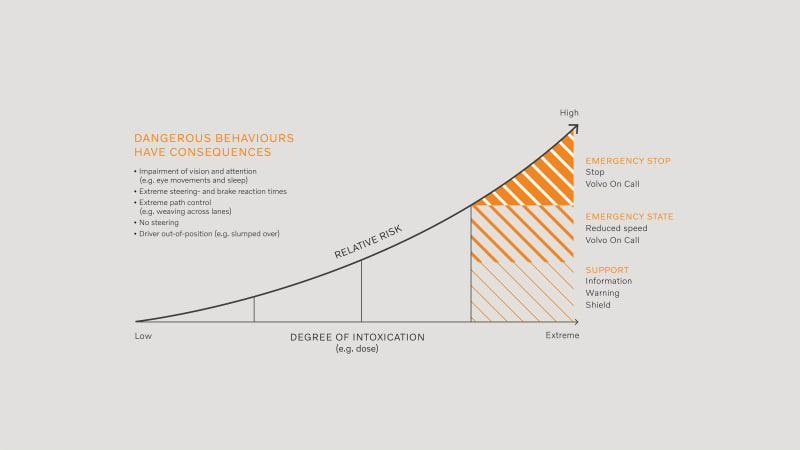 Using in-car cameras mounted to face the driver, sensors and complicated computer programming, the car would theoretically recognize erratic driving, whether that be due to distraction or intoxication. The car could notice this through what we'll call "prompts," such as a lack of steering input for a period of time, if the cameras notice the driver's eyes are closed or looking off the road, if the car detects dangerous weaving, or if it identifies slow driver reaction times.

If the Volvo determines the driver is in danger, it would take action. After repeated warnings, the car would limit its speed, Volvo On Call assistance could be called, and as a last resort, the car would be slowed down and potentially stopped altogether.

For now, the technology is still in the developmental stages, but Volvo plans to introduce in-car cameras on all models "in the early 2020s." Volvo did not address the issue of privacy in the press release, but we previously reported that Volvo plans to keep any footage anonymous and private. Besides, your laptop and phone cameras have been staring at you for years already.
X