Aston Martin Project 003 is a road-going evolution of Valkyrie

From aerospace tech to 3D-printed interior, it's a seriously cutting-edge hypercar

The Aston Martin Project 003 will effectively be the most road-going example of Aston's mid-engined hypercars. It quite obviously draws heavily from the Valkyrie (aka Project 001), which is as much the result of aerodynamic requirements as it is maintaining a family resemblance. It may not appear to be as extreme in certain respects, and it isn't, but it does feature a number of advances.

The 003 utilizes the next-generation of "aircraft morphing technology, to create a variable airfoil across the entirety of the rear wing. The technology named FlexFoil ... has been validated by NASA through extensive performance and acoustic flight testing, with Aston Martin the first to implement this cutting-edge aerospace technology in the automotive industry. The system allows for the car's downforce to be changed without changing the physical angle of the entire element."

So yeah, fancy stuff, and in fact, the production version will feature an even further evolution of the technology.

Aston hasn't released full details, but did indicate the 003 will be powered by a hybrid powertrain consisting of a new turbocharged V6 developed in-house. This is in contrast to the Mercedes-sourced engines in recent Aston Martins. It will feature a sealed oil system previously utilized in the Aston Martin Vulcan and in multiple 24-hour endurance races that allows for oil changes in 90 seconds and the refinement and reuse of the engine oil itself. The production 003 will be the first road-going car to receive this technology. 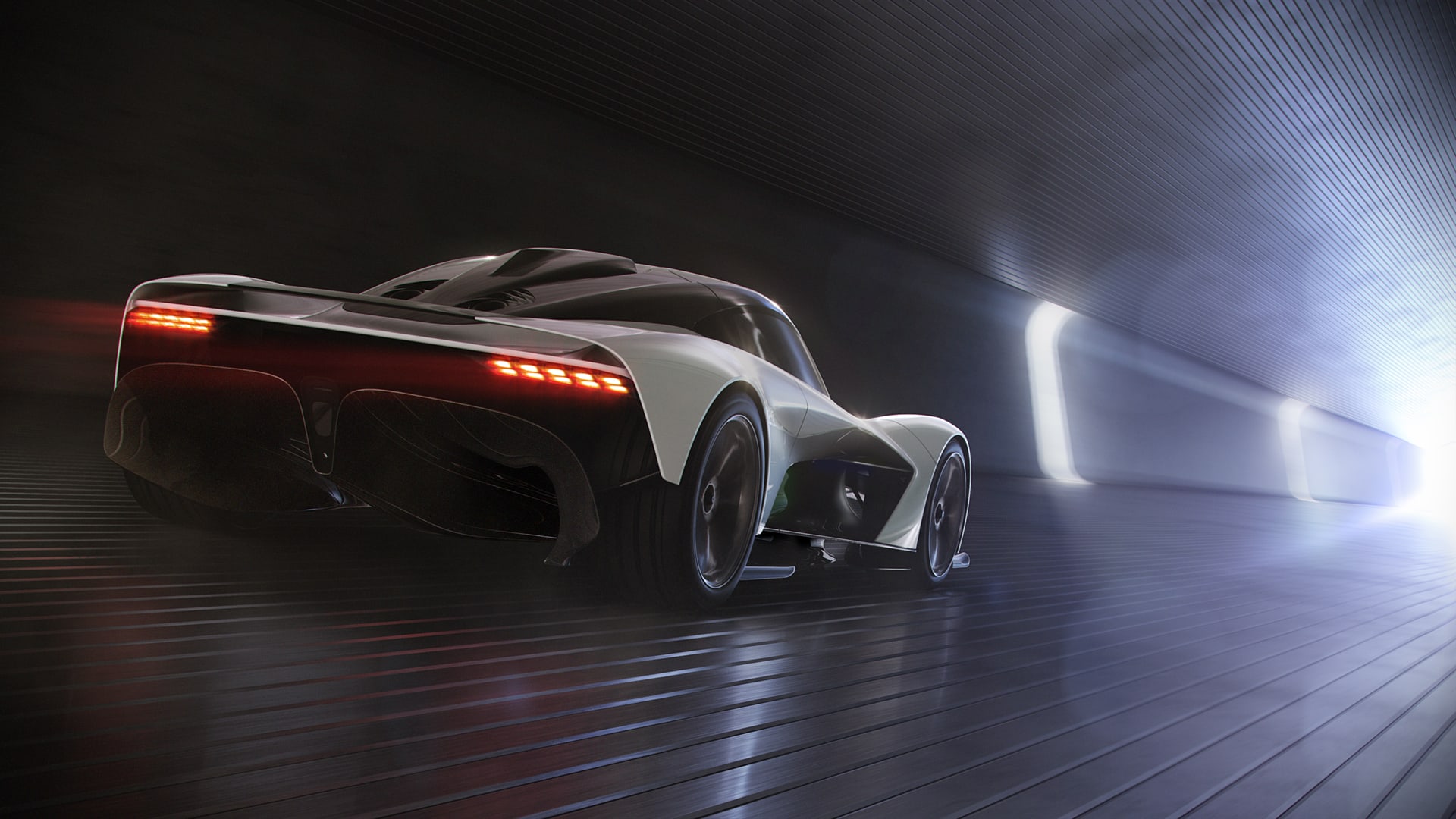 There is plenty shared with Valkyrie, however, including the active suspension and various electronic systems. Aston says the chassis will be "blessed with next-level precision, control and driver connection for class-leading dynamics on road and truck."

Also like the Valkyrie, Project 003 utilizes a lightweight carbon fiber structure with carbon fiber bodywork. It was shaped for maximum aerodynamic effect, which results in the two mid-engine hypercars sharing a common shape and general look. One noteworthy visual difference are the front and rear lighting units. Their lightweight technology are shared, however. Aston Martin says the 003's four lighting units weigh less than one DB11 headlamp.

Inside is where the 003 most ventures away from the Valkyrie, and where it demonstrates its more road-going nature. Greater concessions have been made for usability and comfort, although that is certainly relative. LMP1-style doors bring part of the roof with them when opening, making getting in and out a bit easier. The center console has also been widened to create more space between occupants (although you're still awfully close together), while storage areas have been added for "oddments" that Aston indicates would include a wallet or mobile phone. The console itself is also 3D printed, like other interior pieces, to reduce 50 percent of the typical mass and allow for integrated switches.

Other distinctive interior elements includes a display screen mounted to the steering column to prevent the wheel rim from impeding the driver's view (neat, but an Infiniti G35 did that) and a wraparound band of grilling between the dash and windshield that conceals the air vents, speakers and ambient lighting. The infotainment system is your smartphone — as in there's literally a mount for a smartphone that, as details are scarce, we'd assume can run a car-related app.

Despite being more road-going, there is no trunk, only a "terrace" behind the seats. So, if you want to take your Aston Martin someplace, a DB11 or Vantage is still the better call. The 003 will be a hypercar, not a GT.

It will also not be called the 003 when production starts in late 2021. Aston Martin indicated the name could change during the Geneva Motor Show, and we will update this story should we receive word of that change.