After fiery Tesla crash, a closer look at how door locks work in emergencies

Model S driver died; how other automakers do latches, and the unusual Model 3 setup

Zac Palmer
Car accidents unfold in stages, and at every stage it's important for the safety systems to work in concert, properly, to protect the occupants. When a critical safety device fails, the entire system falls apart — and people get hurt, or die. Take for example the high-speed crash involving a 2016 Tesla Model S this past Sunday. The driver of the electric car was reportedly speeding through traffic before he lost control and crashed into a tree. The Tesla burst into flames, and neither he nor emergency responders were able to open the door.

We can't yet know exactly what happened in this specific case, but it could have been a couple different things. The driver could have been incapacitated. Or, post-crash, the door mechanism might not have operated as it should have due to damage. On a Tesla Model S, both the interior and exterior door mechanisms are unusual.

The interior mechanism is essentially a traditional-style door release pull with two stops. The first stop triggers an electronic door release, and opens the door. Open to full extension, and a mechanical door release operates, even if there's a loss of power — it isn't confusing to operate. 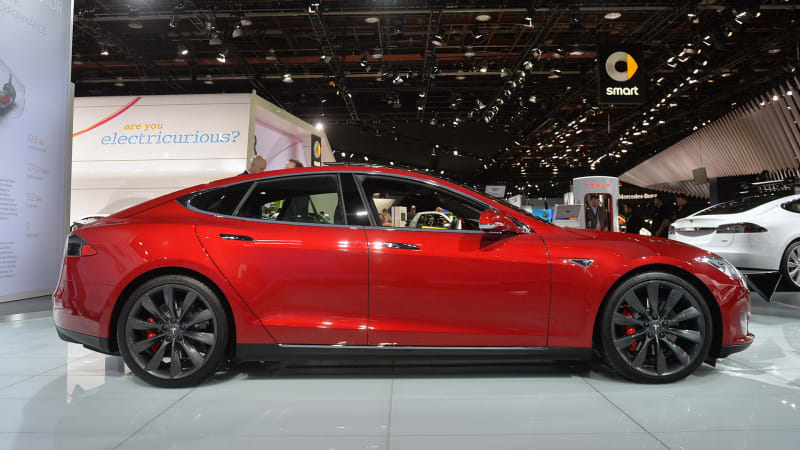 The second thing to go wrong was access from outside. The way Tesla puts it, this should have been easy. An emergency response guide for this car states that, "When an airbag inflates, Model S unlocks all doors, the trunk, and extends all door handles." The problem here? Those door handles didn't extend, so there was no way for anybody to open the supposedly unlocked doors in the time the driver had left. Tesla uses a nifty flush fitment for its exterior door handles on the Model S that pop out to welcome you as you walk up to the car with the key. If there isn't any power to the car, those are not going to pop out.

The last-ditch effort is for a first responder to reach inside the car and use the interior door handle. A police officer on the scene reportedly tried to do exactly that, but was unable to break the glass before the fire became too intense. Witnesses said the flames quickly engulfed the car, leaving scant time for a fire crew to attempt a rescue.

A full investigation will attempt to determine what went wrong. Tesla has already said it's reached out to authorities to offer its cooperation, and telemetry data from the car may hold some answers. 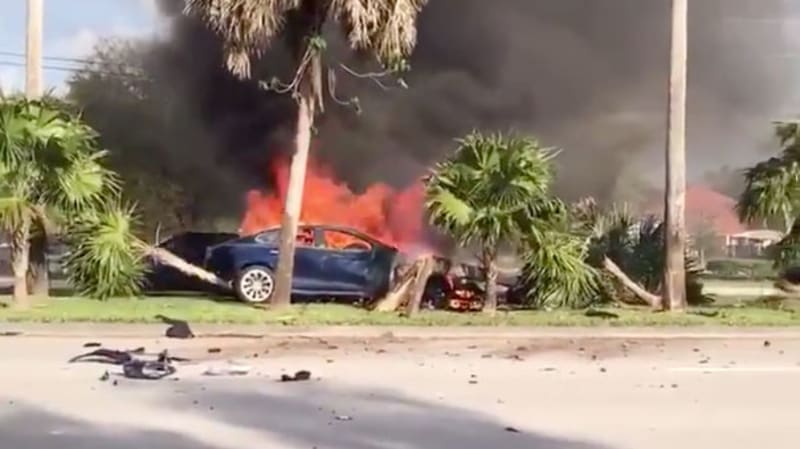 This accident speaks to a broader question of how our car doors — any car, not just Teslas — react when we're in an accident. Not every manufacturer does it the same, and clearly the results aren't always what was intended.

Setting door mechanism functionality aside, automatic locking and unlocking systems are another pivotal component of manufacturers' accident response strategies. Many cars automatically lock the doors when you drive away now, because a car is more structurally sound in accidents with the doors locked. However, like this Model S crash, you might be wanting to get out of the car quickly once everything has stopped spinning. To aid your ability to do this, many manufacturers' vehicles automatically unlock after sensing airbags were activated. This way, you or emergency responders are able to open the car with ease, instead of someone external to the car being forced to smash a window. So the lock/unlock strategy is sound, based on data and experience about crash safety best practices.

It's also widely implemented. FCA has an accident response system that unlocks the power door locks as long as power remains intact for the split second it takes to unlock them. Volkswagen and Mercedes systems also unlock all the doors in the event of an accident. Ford and Lincoln's automatic door unlocking system is on a six second delay. This allows the doors to be locked for longer if there's a secondary crash, but then there's the question of power afterwards. Honda's system doesn't unlock any doors automatically. GM says that given a crash of "sufficient severity," the doors will unlock; they are also meant to never lock during or after airbag deployment.

All these systems in play are the result of what manufacturers deem to be the safest solution. Priorities range from keeping the doors locked the whole time for the strongest structure, to ensuring the quickest access from emergency responders in a situation where a driver is incapacitated. Tesla's strategy of unlocking all four doors on the Model S upon airbag activation isn't anything out of the norm here. All is for naught if the door mechanism itself fails, though.

The bigger picture on door handles and crash safety

We gave the Insurance Institute for Highway Safety a call to clear the air on door handle and door locking regulations. It turns out, there isn't much in the way of any regulation for how these mechanisms are supposed to function.

"There is no federal regulation that regulates how a door handle works during a crash or for how it's constructed," Joe Young, IIHS media relations associate, told us. "There's no regulation requiring certain mechanics of a door handle."

Essentially, it's up to the manufacturers to figure out what's safest — and in case you don't remember FCA's rotary shift selector debacle, or the GM ignition fiasco, that's not a bulletproof strategy. 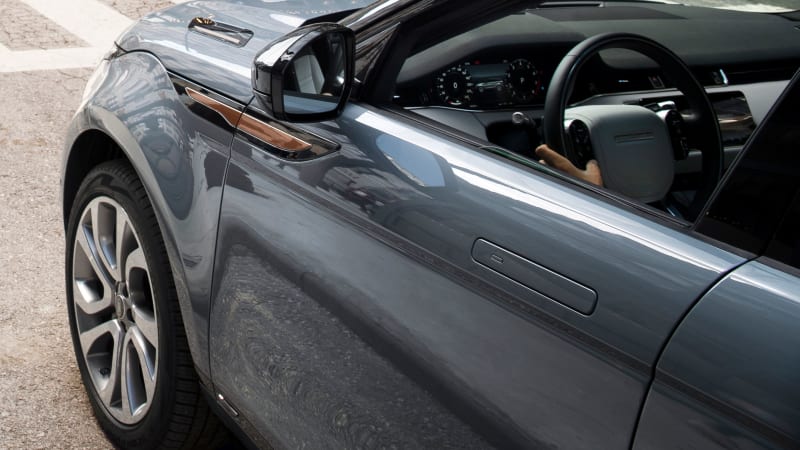 Tesla's unusual door mechanisms: 'Maybe it's not ... the best thing'

Tesla is a company that draws much attention for strange door mechanisms, and for good reason. The Model X has those funky falcon doors that slowly rise up electronically, and it's not particularly easy to escape out of them in a crash where power is lost. You have to pry the rear speaker grille off, then pull a metal wire behind that grille toward the front of the car to manually release the door. Then you're forced to shove the extremely heavy falcon door up to get out. But what about crawling to the front seat, you might ask? Well, depending on the severity and location of the damage, getting to the front seat might not always be an option. And we don't imagine many backseat passengers know about the secret mechanical release. 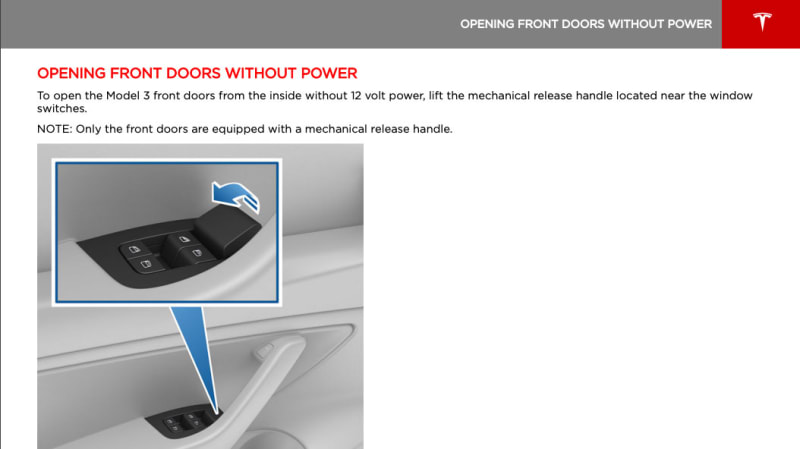 The Tesla Model 3 does not have a mechanical latch for rear passengers at all. Tesla says front passengers are meant to use the physical latch on their doors to get out, then to open the door from the outside for the rear occupants in the event of a power loss. This design doesn't break any rules or regulations, the IIHS told us.

"A lot of these standards have been in place for many, many years and you have a push-button release and it wasn't something they were considering a possibility," Young says. "I think Tesla is relying on the fact that if you've got people in the backseat there's going to be at least one person in the front seat."

With incapacitated passengers in the front seat and a loss of power, the lack of a mechanical release could trap otherwise capable passengers, though. The IIHS doesn't particularly cotton to this setup. "Maybe it's not, from a safety standpoint, the best thing. Certainly we would want people to be able to get out of the vehicle in an emergency," Young says. "Having a mechanical release would certainly be something we would support from a safety standpoint."