To execute EV plan, Volkswagen will plug in its considerable resources

Gary S. Vasilash
One of the things that is sometimes overlooked about Volkswagen is that there is Volkswagen the brand and Volkswagen Group (aka Volkswagen Aktiengesellschaft), the company. The latter is rather extensive, encompassing brands including Audi, Bentley, Bugatti, Lamborghini, Porsche, Škoda, and, of course, VW. It is a company with huge scope and volume.

Consider only its factory in its HQ town, Wolfsburg. Of those 6.23 million, the Wolfsburg plant produced 790,000 of them. In August, VW announced that it would be increasing the capacity of Wolfsburg to 1 million vehicles per year.

On Friday, the Supervisory Board of Volkswagen Aktiengesellschaft met and approved a new arrangement for three factories in Germany.

Why is this notable? Because this creates the capacity required to produce VW's forthcoming range of electric vehicles.

The Emden plant, which opened in 1964 with production of Beetles, will be producing electric small cars and sedans, not only for the VW brand, but for several brands. Obviously a way to leverage more than the MEB electric vehicle platform. 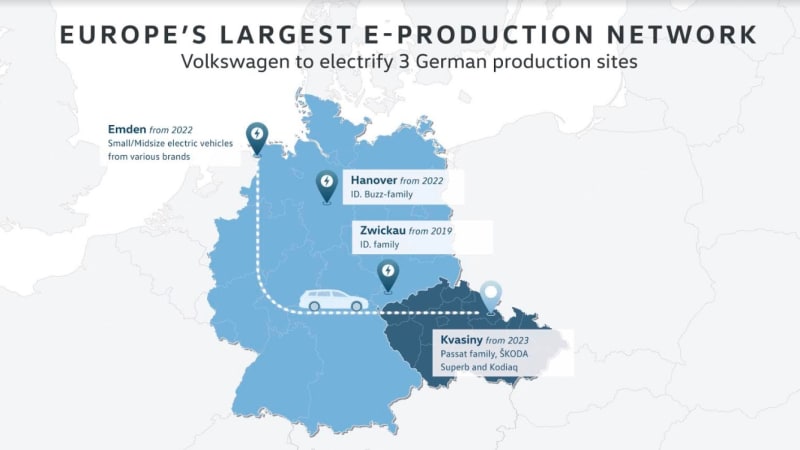 What's notable about this is that the Passat has been produced in Emden. So they're moving it to a Škoda plant in the Czech Republic, then moving some of the vehicles produced at that plant in Kvasiny to a yet-to-be-identified "Group multi-brand plant."

They're converting the plant in Zwickau to full electric production: The plan is to produce 1,500 vehicles per day there by 2021. And those vehicles — six models — will carry three different Group badges.

Volkswagen Aktiengesellschaft has announced that it plans to produce 1 million electric vehicles by 2025. Put in the context of the aforementioned 6.23 million vehicles in total delivered last year, that is a considerable percentage of what it plans to have on the market.

What's important to know about this announced plant strategy is that Volkswagen is clearly positioning its capacity to address the mass production of electric vehicles and, critically, recognizing the benefits it can achieve via the production of EVs for its various brands.

This is all about economies of scale. As scale goes up, prices can come down.

Right now, the global market, with the exception of China (where there are defined mandates), seems somewhat indifferent toward electric vehicles ( Tesla notwithstanding). So it might seem that Volkswagen's plan for a million EVs within a very few years is a pipe dream. Or is it visionary? With these large-scale production plans and associated volume strategies, there are very good odds of considerable success.