Only about two months ago, the IIHS tested the 2018 Hyundai Kona subcompact crossover for safety, and it did well in almost every category except headlights. The subpar lights meant it only received the second-highest award available from the organization: Top Safety Pick. But now Hyundai has updated the lights, and IIHS agrees that some of them are a massive improvement, enough to upgrade the rating to Top Safety Pick+.

The versions of the Kona that have the highly rated lights are Limited and Ultimate trims with projector LED lights. The rating applies to cars built after May 2018, and the main improvement is reduction in glare for oncoming drivers. While these high-level Konas now have solid lights, the IIHS still rates base models with the halogen lights as "Poor" due to weak forward illumination.

All of this makes the Kona an attractive crossover option. Not only does it have good crash test results and headlights, but it's actually an enjoyable car to drive, particularly with the spunky turbo engine. Add in the distinctive, funky styling, and the Kona is a stand-out in its class. 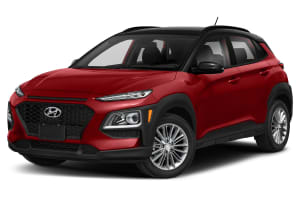